Recep Tayyip Erdogan's office confirmed on Wednesday that the Turkish president will meet with his American counterpart Donald Trump in Washington next week after a phone call between the two leaders, despite a push in Congress for sanctions against Turkey.

Erdogan's visit to the White House would come at a time of growing anger in Capitol Hill over Turkey's incursion in northern Syria.

"Both leaders affirmed that they will meet in Washington on 13 November following Trump's invitation to do so," the Turkish presidency said in a statement late on Wednesday.

Later in the day, Trump wrote on Twitter that he is looking "forward to seeing President Erdogan next Wednesday."

The confirmation of the visit comes after Turkish officials said Erdogan may cancel the trip over congressional measures against Ankara, including a House resolution last week that recognised the Armenian genocide.

Trump had faced a major backlash over pulling US troops from northern Syria, effectively allowing a Turkish military operation against Kurdish fighters in the area.

The US-backed, Kurdish-led Syrian Democratic Forces (SDF) had played a leading role in the fight against the Islamic State (IS) group. However, Turkey views the Kurdish fighters on its border with Syria as a threat to its national security and says they are link to Turkey-based separatists.

Despite practically giving the green light for the Turkish military campaign, Trump imposed sanctions on Turkey for the offensive last month. But those measures were lifted after Washington and Ankara reached a ceasefire agreement that would halt the Turkish offensive and see Kurdish fighters withdraw from the border area.

Still, members of the US Congress from both major parties, who had accused Trump of betraying America's Kurdish allies, have continued to push for more sanctions against Turkey.

On 29 October, the US House of Representatives recognised the killing of scores of Armenians at the hands of the Ottoman Empire during World War I as a genocide - more than a century after the massacres - in strong rebuke of Turkey.

While the White House has not endorsed that resolution, Trump did not adhere to Turkey's call to reject it.

"The administration itself doesn't recognise the genocide, nor do they support the sanctions. Yet they decided to be silent," a Turkish official told MEE earlier this week.

While Turkey acknowledges that Ottoman forces killed Armenians in battles during World War I, it says the killings were not part of an organised campaign and do not amount to genocide. Last week, the Turkish foreign ministry denounced the House vote, calling it a "meaningless political step". 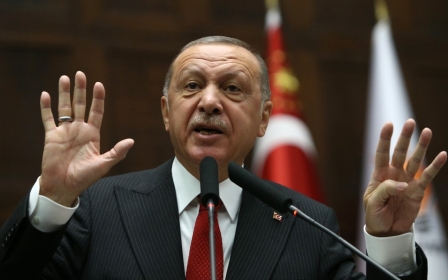 Diplomacy
Erdogan's Washington visit: Why the Turkish president is hesitating