Fighters from the Syrian Democratic Forces (SDF), which are backed by the US (Reuters)
By
MEE staff

Clashes broke out in Syria on Wednesday between Turkish-backed rebels from the Free Syria Army (FSA) and members of the largely Kurdish, US-backed Syrian Democratic Forces (SDF), according to local media reports.

The fighting broke out just west of the strategic northern town of Manbij, close to the Turkish border.

The Turkish military is providing artillery support to the FSA rebels involved in the fight, according to Turkish daily Cumhuriyet, which quoted the Russian news site Sputnik.

The Turkish-backed forces were reported to be making quick progress through villages to the west of Manbij.

The town of Manbij, situated on the Euphrates river, was wrested from Islamic State militants in 2016 by the SDF, comprising fighters mainly from the Peoples’ Protection Units (YPG), the armed wing of the Syrian-Kurdish Democratic Union Party (PYD).

The SDF ground troops were backed by US air strikes during that campaign.

Turkey launched its Euphrates Shield offensive in August 2016 with the aim partly to prevent YPG forces from linking up Kurdish cantons along Turkey's border. It considers the YPG a terrorist organisation affiliated to the Turkish PKK and wants to remove its forces west of the Euphrates river.

Turkish President Recep Tayyip Erdogan on Tuesday announced that the Turkish military, spearheaded by FSA fighters, would march on Manbij after having completed its mission to free the town of al-Bab, just west of Manbij, from IS last week.

'Now it is time for Manbij'

“Now it is time for Manbij, which belongs to the Arabs, not the PYD or YPG,” said Erdogan.

The United States had promised Turkey that PYD / YPG forces would withdraw from Manbij to the east of the Euphrates, but Ankara says that withdrawal never happened.

“We told this to our American friends. The PYD and YPG should move to the east of the Euphrates; the area should be left to the locals of Manbij.” said Erdogan.

Turkey has refused US requests to cooperate with the SDF, saying it is a smokescreen for the PYD and that any Arab members it has are tokens.

Turkey accuses the PYD of engaging in ethnic cleaning, and Erdogan insisted on Tuesday that Manbij must be populated by indigenous Arabs.

Turkey and FSA fighters took control of the town of al-Bab last week as part of the Euphrates Shield operation, which was launched on 24 August.

Turkey’s stated aim from this military incursion is to clear what it calls terrorist threatsan from an area of roughly 5,000 square kilometres along its borders with Syria.

Joint operation for Raqqa in doubt

The Turkish military said it had achieved its initial objectives after the capture of al-Bab.

Around 75 Turkish soldiers were killed in the operation, along with hundreds of FSA fighters.

The Turkish military said more than 3,000 IS and YPG militants have been killed thus far.

Ankara has proposed a joint operation with the US to lay siege to Raqqa, the self-proclaimed capital of IS, but only if the PYD is excluded.

The US views the PYD as its most effective ground force in the fight against IS, and that doesn’t appear to have changed since Donald Trump took office.

Ankara has warned the US of the future consequences of using what it calls one terrorist outfit to fight another.

Ankara says the PYD is an affiliate of the Kurdistan Workers’ Party (PKK), designated as terrorist by Turkey, the US and the EU. 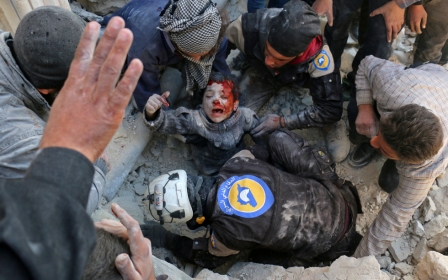