Istanbul-based Foundation for Sciences and Arts (BISAV) denounces the decision, calling it "arbitrary" and a "dangerous initiative" Former Prime Minister Ahmet Davutoglu (L) at BISAV during a visit in 2014, alongside the head of its board Mustafa Ozel (BISAV)
By
Ragip Soylu
in
Ankara

The Turkish government has seized a foundation linked to former Turkish Prime Minister Ahmet Davutoglu, who recently had a falling out with President Recep Tayyip Erdogan.

A statement from the Istanbul-based Foundation for Sciences and Arts (BISAV) said on Tuesday that the government had assigned three trustees to take over the foundation which was founded by the veteran politician. 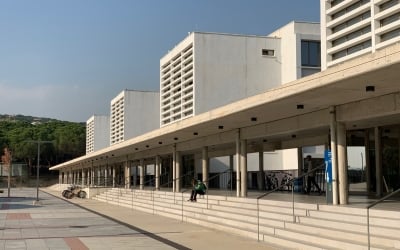 The move comes just weeks after the Turkish government seized the privately owned Istanbul Sehir University for failing to pay back loans to Halkbank, a public lender.

BISAV, which was also involved in the establishment of Sehir University, condemned the takeover in a statement, calling the announcement a "dangerous initiative".

"It isn't appropriate under any [understanding] or justification of justice to treat our 40-year-old foundation which has been serving our country's cultural and educational life," the statement said.

"This arbitrary attitude is a step that may greatly damage our hundreds of years old foundation tradition. A dangerous initiative that interests all foundations, not only BISAV."

Davutoglu was among the founders of the BISAV, which is believed to have educated tens of thousands of students in science, Islamic history and Turkish culture.

He resigned from the AKP last September and has since established his own political party.

Tuesday's announcement provoked a flurry of condemnation online with Mustafa Yeneroglu, an MP who was a senior official at Erdogan's AKP until last month, calling it "really shameful."

Sibel Eraslan, a conservative writer with close ties to Erdogan's family, said that BISAV was an intellectual umbrella during the mid-90s when the staunchly secular Turkish government had enforced a ban on students who wore the headscarf. "It is really saddening that a foundation established by the labour and savings of Islamic circles is today taken over by the trustees," she said.

The General Directorate of Foundations said in a statement that it only carried out the relevant law following the seizure of Sehir University.

"We preserved the foundation by immediately assigning a lawyer, a property expert and a financial expert to its management. This was made to protect the foundation's legal entity, monetary assets and founding principles," the statement said.

Erdogan and Davutoglu have found themselves in a heated public debate over the fate of Sehir, which is totally paralysed after its accounts were frozen following the Halkbank dispute.

That decision was viewed by many as a ploy to pressure Davutoglu over his newly founded opposition movement, the Future Party.

Erdogan has accused Davutoglu and his associates of inappropriately granting public land to Sehir while it was associated with the former prime minister.

Since resigning from the AKP, pre-empting the outcome of the official expulsion process started by the party's executive committee, Davutoglu's Future Party has represented a new and unique challenge to Erdogan's ruling party.