Contents were to be unloaded, inspected, sent on to Hamas-run Gaza Strip, which is under Israeli blockade A Turkish ship carrying aid for Gaza arrived in Israel on Sunday, a week after the two countries agreed to restore ties that soured over a deadly raid on an aid flotilla.

The Lady Leyla container vessel docked at Ashdod port in the afternoon after departing on Friday, an AFP journalist reported.

Its contents were to be unloaded, inspected and sent on to the Hamas-run Gaza Strip, hit by three wars with Israel since 2008 and under an Israeli blockade.

Turkey had initially pushed for a lifting of Israel's blockade on Gaza as part of the negotiations to normalise ties, but Israel rejected this.

A compromise was eventually reached allowing Turkey to send aid through Ashdod rather than directly to the Palestinian enclave.

Israel says the blockade is necessary to prevent Hamas from receiving materials that could be used for military purposes, but UN officials have called for it to be lifted, citing deteriorating conditions in the territory.

Turkey's ruling Islamic-rooted AKP party has friendly ties with Gaza's Hamas rulers, and President Recep Tayyip Erdogan has been a vocal supporter of the Palestinian cause.

Turkey and Israel were formerly close regional allies, but fell out in 2010 when Israeli commandos killed 10 Turkish activists in a raid on an aid flotilla seeking to run the blockade on Gaza.

Prime Minister Benjamin Netanyahu has promoted the economic benefits of restoring ties, with talk of building a pipeline to Turkey to export Israeli gas, and the need to find allies in the turbulent Middle East.

The deal received a mixed response in Israel.

There were allegations that it does not do enough to push for the return of four Israelis missing in Gaza - two soldiers who have been declared dead and two civilians believed to be alive and held by Hamas.

Several relatives and supporters of the soldiers' families protested against the deal outside Ashdod port on Sunday.

"We aren't opposed to this agreement," Herzl Shaul, father of one of the dead Israeli soldiers, told Haaretz newspaper. "But it is a terrible deal for the families. Our boys are not mentioned in it. This is a prize to Hamas and a loss for Israel. The prime minister got two years of silence with countless promises that he would see to it that the boys would be returned home."

The issue of the missing soldier's bodies was not part of the final agreement between Turkey and Israel, though Turkey issued a separate "letter of goodwill" in which it promised to work with Hamas for the release of the missing Israelis. Diplomacy
Hamas thanks Turkey for Gaza efforts in Israel deal 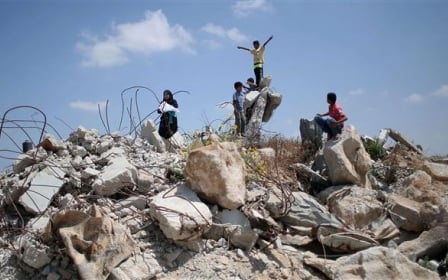