UAE and US accused of running 'secret prisons' in Yemen A report by Human Rights Watch said UAE forces were arbitrarily arresting or forcibly disappearing Yemenis and appeared to have "moved high-profile detainees outside the country" including to a base in Eritrea.

In a separate investigation, US defence officials told the Associated Press that US forces had participated in the interrogations of hundreds of prisoners in the Emirati-run jails inside Eritrea and Yemen.

The UAE is a key member of a Saudi-led military coalition that entered Yemen's conflict in 2015 to battle on the government's side against Iran-backed Houthi rebels.

HRW said it had documented 49 cases, including those of four children, who had been "arbitrarily detained or forcibly disappeared" - at least 38 of them by UAE-backed forces.

The New York-based group said the UAE runs detention facilities in southern provinces home to al-Qaeda in the Arabian Peninsula (AQAP) and a local affiliate of the Islamic State group. Children are among those in the centres, it said.

I am quoted in this AP breaking story on US interrogations in UAE prisons rife with #Torture. Here's what I said.https://t.co/slxe9PWgxx pic.twitter.com/M90Zb7VQrz

"You don’t effectively fight extremist groups like al-Qaeda or ISIS by disappearing dozens of young men and constantly adding to the number of families with ‘missing’ loved ones in Yemen,” said Sarah Leah Whitson, Middle East director at Human Rights Watch.

“The UAE and its partners should place protecting detainee rights at the centre of their security campaigns if they care about Yemen’s long-term stability.”

Several US defence officials told the Associated Press that US forces had participated in interrogations of hundreds of prisoners in Emirati-run jails inside Eritrea and Yemen.

They said US senior military leaders were aware of allegations of torture at the prisons in Yemen, looked into them, but were satisfied that there had not been any abuse when US forces were present.

"We always adhere to the highest standards of personal and professional conduct,” said chief spokeswoman, Dana White, when presented with AP’s findings.

"We would not turn a blind eye, because we are obligated to report any violations of human rights."

Responding to these accusations, Shelby Sullivan-Bennis, a lawyer with Reprieve US specialising in counter-terrorism abuses, said: "The revelation of US involvement in Yemen's secret prison network is an international disgrace and raises serious questions for President Trump.

"President Trump must learn that torture doesn’t work and only hardens hearts and minds against us," said Bennis.

A country in turmoil

Since March 2015, a Saudi-led coalition of states, including the UAE, has conducted an aerial and ground campaign in support of President Abd Rabbuh Mansour Hadi against Houthi forces and its allies, who took over the capital, Sanaa, in September 2014.

The US and UK have provided military support to the coalition.

The World Health Organisation estimates more than 8,000 people have been killed in two years of conflict in Yemen, which also faces a deadly cholera outbreak and the threat of famine.

All parties in Yemen's war have drawn harsh criticism for causing civilian suffering.

The United Nations and HRW have said air strikes by the Saudi-led alliance have killed many civilians and may amount to war crimes.

During the conflict, AQAP seized weapons, territory, and revenue by looting the central bank in Mukalla, the capital of the Hadramawt governate, and running the city’s port for about a year, Reuters reported.

AQAP has carried out numerous attacks, primarily on military and security targets in Yemen’s southern and eastern governorates, killing dozens of people.

The local IS affiliate in Yemen has also claimed responsibility for similar attacks over the last two years. 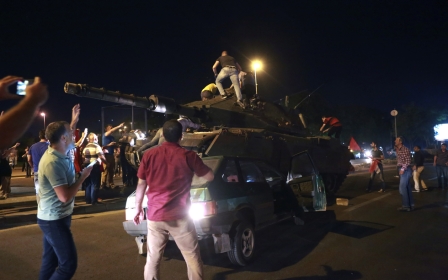