Experts say as western sanctions on Russia remain, the worst of the global oil supply impact is yet to come An Emirati man stands in front of a pipeline at the Fujairah oil terminal in the UAE during the inauguration ceremony of a dock for supertankers, on 21 September 2016 (AFP)
By
Umar A Farooq

The United Arab Emirates' energy minister on Monday reaffirmed an oil alliance with Russia, as governments across the globe shun Moscow over its invasion of Ukraine.

Suhail al-Mazrouei, a former president of the oil alliance, said that Russia, which exports roughly 10 million barrels of oil a day, is an important member of the global Opec+ energy alliance and no producer could substitute its production.

"Unless someone is willing to come and bring 10 million barrels, we don't see that someone can substitute Russia," Mazrouei said during the Atlantic Council's global energy forum in Dubai.

The Opec+ alliance has so far stuck with a plan for gradual oil production increases based on a deal struck during the height of the coronavirus pandemic lockdowns, when producers made deep cuts to output to make up for the loss in demand for fuel. As oil prices have soared to around $100 a barrel, the United States and several European nations have been calling on Gulf Arab oil producers to do more to help bring down prices.

Earlier this month, UK Prime Minister Boris Johnson travelled to the UAE and Saudi Arabia and raised the issue directly with the countries' leaders.

Mazrouei, however, said that the Opec+ alliance was here to stay and shut down any suggestions that the UAE would break away from the pact and unilaterally increase production.

"Staying together, staying focused, and not allowing politics to kick into this organisation ... we always believe that whatever we do as countries when it comes to production and to this work, it needs always to stay out of politics," he said.

Saudi Arabia and the UAE, two close US allies and leaders of Opec+, have been constraining their criticism of Russia's invasion of Ukraine, while also dodging demands from the US regarding increasing oil outputs.

"They don't want to risk the unity of the group. Having Russia being part of the Opec+ group is incredibly important, especially for the Gulf producers," Amena Bakr, chief Opec correspondent for Energy Intelligence, said during a Twitter Spaces panel on Monday morning.

"We're at a point where unity is considered one of the most important factors for the group, and nobody wants to risk spoiling that unity by suggesting any kind of policy change."

Mazrouei also used his speech to press for greater and long-term investment in oil and gas, even though the UAE has pledged to reach net-zero emissions by 2050.

"We are in an environment where everyone is saying raise your production," he said. "We definitely at this time need all available resources," he added, criticising efforts to pull back from investments in oil and gas.

The current oil supply crisis has highlighted that amid the international community's push towards transitioning to renewable energy sources, the world continues to heavily depend on fossil fuel supplies.

Bakr said that the western demands were frustrating Gulf oil producers, including the UAE and Saudi Arabia, because the calls were coming without a commitment to invest in the future of their countries' oil production.

"You need years of investment and you need investment to happen today in order to secure the future of this supply," she said on Monday.

"They're frustrated with hearing constant requests for more oil when they are not hearing the same persistence with or encouraging future investment to secure supplies. All they are hearing is that we need oil now, but in two, three years time, we don't need it anymore."

Meanwhile, oil experts have said that with western sanctions on Russia likely to remain in place for the coming months, oil prices will continue to soar. Analysts previously told MEE that even a major boost in production from countries such as Saudi Arabia and the UAE would fail to bring down prices.

The price of Brent Crude, the standard benchmark for oil, remained steady at $110 a barrel on Monday morning.

"We think that the worst month in terms of supply impact is probably still ahead of us," Abhi Rajendran, Energy Intelligence's research director, said during Monday's panel on Twitter Spaces. 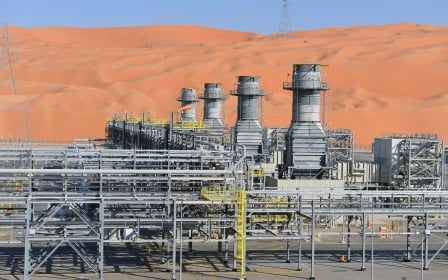