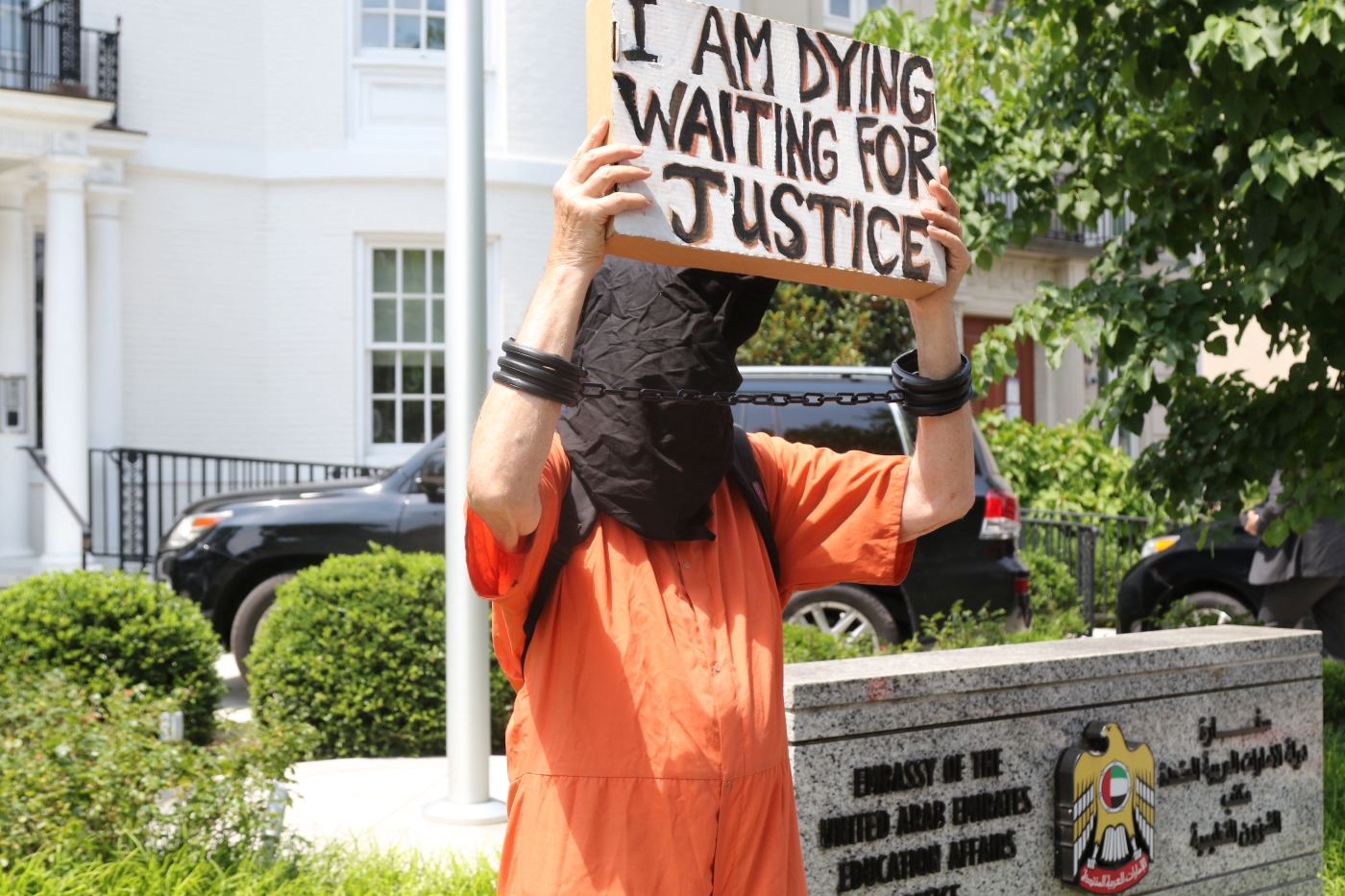 A protester wearing an orange jumpsuit with a black hood holds a sign in front of the UAE Education Affairs Office in Washington on 22 July 2021 (MEE/Umar Farooq)
By
Dania Akkad
, Umar A Farooq
in
Washington

Protesters gathered in the US capital on Thursday to demand that the United Arab Emirates release a former Guantanamo detainee imprisoned in the oil-rich nation rather than forcibly repatriate him to Russia.

Ravil Mingazov, a former Red Army ballet dancer, spent 15 years in Guantanamo without charge before he arrived in the UAE on the last plane before Donald Trump took office in January 2017.

Four years later, Mingazov, 53, remains in an Emirati prison where his family and legal team say he has been tortured, held in solitary confinement, and deprived of water and medical care.

The US was assured by the UAE that as part of the transfer agreement made behind closed doors, Mingazov would spend six months in a rehabilitation centre before he was released with a job and housing, said Gary Thompson, his Washington, DC-based lawyer.

Protesters called on the Biden administration to act immediately on Mingazov's behalf, calling the US government "complicit" after agreeing to the secret terms of his transfer to the UAE five years ago.

In brief and sporadic phone calls to his mother and son which are sometimes cut off by guards, he has described the prison as "worse than Guantanamo", Thompson said.

Now Thompson, human rights experts and the UN are concerned that he will soon be forcibly returned to Russia where they fear he could face religious persecution, torture or further imprisonment.

A State Department spokesperson told Middle East Eye that the "United States is aware of and deeply concerned by reports regarding the potential forced repatriation to Russia from the UAE.

"We have discussed our concerns with the UAE and will continue to follow the situation closely," the spokesperson said in an email to MEE.

The UAE embassy in DC did not respond to a request for comment.

"I wish Ravil had gotten stuck inside the Trump Gitmo for four more years," Thompson told Middle East Eye. "I wouldn't wish that on a person, but compared to where he is, Guantanamo must sound like a resort."

A group of protesters gathered in front of the UAE Education Affairs Office in Washington, holding signs saying: "Shame on UAE" and "No Rendition for Ravil", as cars drove past.

Many of the demonstrators wore black hoods and orange jumpsuits, similar to the prison uniforms worn by Guantanamo Bay detainees.

As they began their protest, several building staff came out and appeared to record videos of the protest with mobile phones before closing the door again.

But the protesters were undeterred and continued to demand the release of Mingazov and for the UAE to ensure he is not sent back to Russia. "We want him to have an opportunity to see his son and to see freedom and to see a life where he can be respected and live as a practising Muslim who doesn't have to fear persecution anymore. He will not have that life if he is returned to Russia," Kristin Davis, co-counsel for Mingazov, said during the rally.

Max Obuszewski, a Maryland-based activist and founder of the Baltimore Nonviolence Center, said that he was compelled to attend the demonstration after hearing the details of Mingazov's case.

"When I heard about Ravil's story, I was just stunned," Obuszewski told MEE.

"When I heard this story about this torture chamber and these poor souls, I had to be here," he added, referring to Mingazov and the other detainees held at the notorious prison.

Mingazov's dream: to live in an Arab country

Mingazov fled Russia in 2000 for Tajikistan to escape persecution for his Muslim faith and start a new life with his family.

But his baby son became ill, so his wife and the baby went back to Russia while Mingazov went on to Afghanistan and then Pakistan. In 2002, he was arrested by Pakistani police who sold him for a bounty to the US, according to his legal team.

He was then taken to US officials in Islamabad and then on to Bagram Air Base in Afghanistan where he was severely beaten, slammed to the ground, hung by his arms for extended periods of time and deprived of food and sleep, Thompson said. Eight years later, still without charges, Mingazov won his habeas corpus trial, which meant that the court had determined that the US government had no legal basis to detain him. “Then it took six more years to get him released, if you can believe it,” Thompson said.

So by 2016, Mingazov was cleared for transfer and put on a resettlement list for detainees who couldn’t be repatriated to their home countries because they could face torture or persecution, or political instability or war.

At the time, the Office of Guantanamo Closure, set up by the Obama administration, was working to get detainees relocated to third countries through secret, bilateral transfer agreements.

Mingazov's dream, Thompson said, was to live in an Arab country. Inside Guantanamo, he had learned to speak Arabic, the most common language used among the detainees, and also had grown accustomed to the prayers and greetings of his fellow detainees.

"He said, 'I feel very comfortable with Arabic culture. It's really for me'," Thompson said. So when the UAE came up as an option shortly at the end of Obama’s second term, it seemed “too good to be true".

That was the last time Thompson spoke to Mingazov.

Mingazov is one of 23 detainees - 18 Yemenis and four Afghans - who were transferred to the UAE between 2015 and 2017. None of them has been released into Emirati society or given jobs or housing, as their legal teams and families were assured.

Katie Taylor is the deputy director of Reprieve and coordinator of the organisation’s Life After Guantanamo Project, which was set up in 2009 to support detainees as they left the facility and resettled into life at home or in third countries.

While the terms of the agreements, like the one between the US and the UAE, were secret, there are some general trends she has seen as she’s documented the experience of detainees over the years.

"It doesn’t seem that there have been really stringent agreements on how the men would be treated or what their resettlement programme will look like. What that means is that every country, literally every country, has done it differently," she said.

"It's unclear what was intended in the UAE context because what actually happened is the men were thrown into prison. And that’s how it’s been ever since. It’s in a sense worse than a normal prison because they are held mostly incommunicado."

In fact, Taylor said Reprieve has never been able to establish with absolute certainty where the men are being held.

Lawyers representing the detainees, she said, have written repeatedly to the UAE government over the years, trying to simply get access to their clients. “The UAE authorities have just never even responded,” she said.

At the end of 2019 and the beginning of 2020, the four Afghan detainees were forcibly repatriated to Afghanistan. One of the men died a few months after getting home, something his family has attributed to the abuse he suffered in both Guantanamo and the UAE.

Left behind are Mingazov and the 18 Yemeni detainees. In recent weeks, however, a group of UN human rights experts have raised alarm bells that Mingazov might soon be sent back to Russia.

"We are seriously concerned that instead of releasing him in accordance with the alleged resettlement agreement between the US and the UAE, Mr Mingazov has been subjected to continuous arbitrary detention at an undisclosed location in the UAE, which amounts to enforced disappearance," the experts said in a statement.

"Now, he risks being forcibly repatriated to Russia despite the reported risk of torture and arbitrary detention based on his religious beliefs."

There are concerns that his forcible repatriation could happen very quickly. In June, his mother was visited by Russian officials who were collecting photographs and paperwork to verify for a passport for Mingazov, exactly what happened before the Afghan detainees were sent home, Taylor said.

Many of the protesters at Thursday's rally had been demonstrating against the Guantanamo Bay prison since it was created, and have for years called on Washington to release the detainees held there and ensure that they are able to spend the rest of their lives free of persecution.

Doug Spalding, another attorney who formerly represented Mingazov that was present at the protest, said his time representing Mingazov "was one of the highlights of a long professional legal career".

"I believe that the United States has the influence and the ability to make things right for Ravil Mingazov," he said during the demonstration.

"While the UAE may be stuck in its past propensities to ignore human rights, the United States particularly under this current administration has that obligation to make sure it exercises its huge influence to achieve a favourable outcome for Ravil that will grant him freedom, and give him an opportunity to be reunited with his family and live out a productive life." Guantanamo
Guantanamo Bay: US transfers Moroccan detainee back to Rabat after 19 years' jail