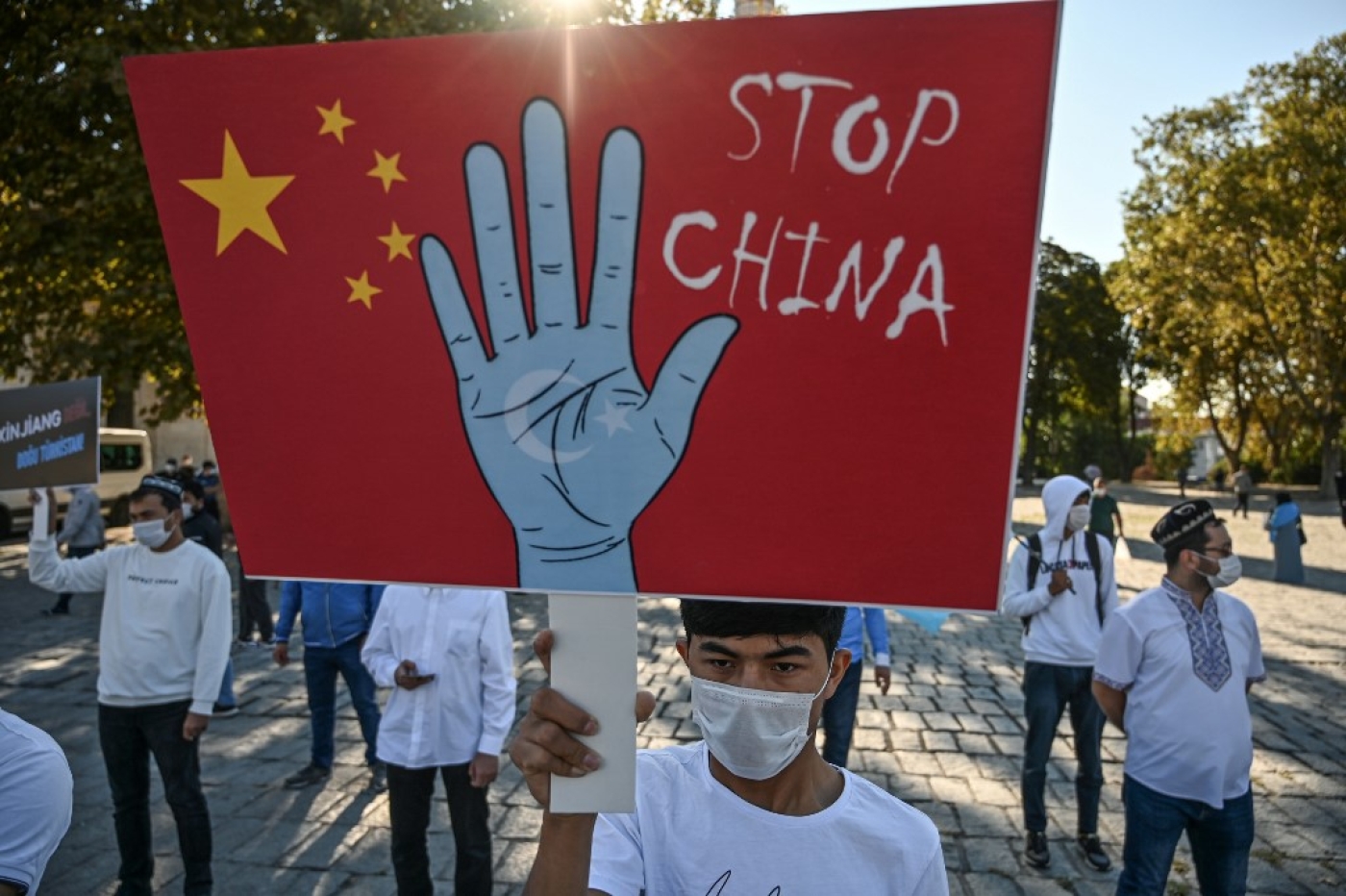 Beijing has ratified an extradition treaty with Turkey that Uighurs fear could pave the way for tens of thousands to be deported and imprisoned in internment camps that rights group say constitute a “cultural genocide”.

The treaty, first signed during Turkish President Recep Tayyip Erdogan’s visit to Beijing in 2017, was ratified last weekend at the Chinese National People’s Congress, with state media saying it would be used for counter-terrorism purposes.

Turkey is yet to ratify the treaty, and as such no extraditions are expected any time soon. However Uighurs are now calling on the Turkish government and lawmakers to stop the agreement from going through. Uighurs, a Muslim-majority Turkic minority, have sought refuge in Turkey since 1952, when the Turkish government offered asylum to those fleeing the Xinjiang region (also known as East Turkestan) as a fledgling communist China cemented its hold.

Today, however, Turkey’s estimated 50,000 Uighur refugees now find themselves living on the edge, as China escalates the persecution of their kin back home and targets the community abroad.

Warming relations and allegations of collusion between Ankara and Beijing have only compounded fears that Uighurs could be deported to join the estimated one million detained in camps.

Earlier this week, an investigation by BuzzFeed News revealed a vast sprawl of factory facilities built across the western region of Xinjiang, underscoring allegations of forced labour and mass incarceration.

China denies the allegations, and says it seeks to lift Xinjiang's people out of poverty and increase seucrity through its policies.

Abduweli Ayup, a Uighur activist in Turkey, told Middle East Eye the treaty was “not surprising” because of alleged Turkish cooperation in deporting Uighur dissidents to China, sometimes via a third country.

Among them is a 59-year-old mother of two, whom activists fear was deported from Turkey to Tajikistan in June, before being taken to neighbouring Xinjiang. Ankara denies the claims.

Ayup suggests that should Ankara ratify the treaty, extraditions will be carried out in secret and not en masse. “I don’t believe that the Turkish government will send Uighurs to China openly, not like what happened in Egypt,” he said, referring to the mass arrests of Uighur students in Cairo in 2017, thought to be at the behest of Beijing.

'The extraditions were taking place underground before, and the Chinese government didn’t mention them openly. Now they’ve put it on the table, it can draw international attention'

However, he says that the public nature of the extradition accord could turn the spotlight on China’s hitherto covert campaign to force Uighurs to return home for political and religious screening.

“The extraditions were taking place underground before, and the Chinese government didn’t mention them openly. Now they’ve put it on the table, it can draw international attention,” said Ayup, who added that Turkish campaigners are now taking up the issue.

“China has made a big mistake,” he said.

Provisions in the treaty that have raised the alarm include a clause that “it shall not matter whether the laws of both parties place the offence within the same category or describe the offence by the same terminology”.

Rights groups say this could allow the parties to request the extradition of its citizens charged for offences that are interpreted differently in the other party's jurisdiction. This fear is echoed by Dolkun Isa, president of the World Uighur Congress, who is one of those China has charged with "terrorism", a tactic critics say is used to tarnish and criminalise Beijing's opponents.

“Because the Chinese and Turkish governments have a different view of what a criminal is, the Chinese can misuse this law to claim that any Uighur is criminal and seek their extradition," Isa said.

Representatives from the Congress are lobbying politicians to oppose the ratification of the treaty, which Erdogan introduced to parliament in April 2019.

Australian-Uighur activist Arslan Hidayat said that by merely entertaining the treaty, Turkey had “sold out” the Uighurs.

“We Uighurs feel as though we have been sold out because obviously the Turks and the Uighurs have ethnic ties as well as religious ties. To be sold out by your own is very, very hurtful,” he told MEE.

'Because the Chinese and Turkish governments have a different view of what a criminal is, the Chinese can misuse this law to claim that any Uighur is criminal and seek their extradition'

Hidayat questioned Erdogan’s commitment to the Uighur cause, highlighting the disparity between Muslim-majority Turkey drawing closer to Beijing while France last week opposed a proposed EU-Chinese trade deal over the abuse of Uighurs.

He noted that Erdogan had positioned himself as a defender of Muslims by calling for a boycott of French products in October over President Emmanuel Macron's support for depictions of Prophet Muhammad.

“It’s certainly hypocrisy where you’ve got the government of supposed Muslim-majority countries selling out Uighurs, and the governments of non-Muslim countries standing up for Uighurs,” he said.

Turkish officials did not respond to a request by MEE for comment.

'I lost everything for downloading WhatsApp'

An investigation by Buzzfeed News this week revealed the construction of more than 100 factory buildings within the vast compounds used to house more than 1 million people in in Xingjiang, the latest evidence in a thickening catalogue of abuses committed against Uighurs and other minority Muslim groups.

Researchers say abuses in Xinjiang may affect the supply chains of some of the world’s largest brands, including Nike and Coca-Cola.

One Uighur woman interviewed by Buzzfeed News said she was arrested in 2017, detained in a compound and forced to work in a factory, sewing garments for nine hours a day.

In the evenings after her shift, she was required to take classes, memorising and repeating Chinese Communist party propaganda and studying Mandarin, the language spoken by the majority of Chinese.

In September 2018, near the end of her time in the camp, police finally told her that she had been arrested for downloading the WhatsApp messaging app. “I lost everything, including my health,” she told BuzzFeed News.

Uighur activist Abduweli Ayup said that, to avoid a similar fate, Uighurs in Turkey were left with little choice but to speak up.

“In Turkey, people [Uighurs] are afraid of being arrested, so they are not very politically active,” he said.

“We need to stand up and say that we are Uighur and to tell people on social media that we can be victims of deportation.” 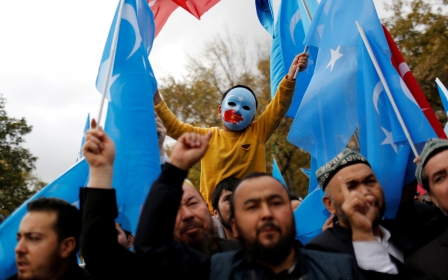 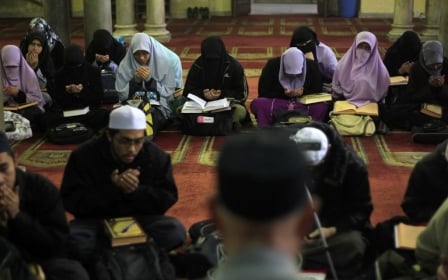