Despite rules preventing security exports to countries that may use the technology for internal repression, the UK has sold nearly $100m worth of spyware since 2015 The UK is selling wiretaps, spyware and other equipment to 17 countries ranked "not free" by the NGO Freedom House, including Saudi Arabia, the United Arab Emirates and Bahrain, according to a report by The Independent.

The newspaper reported on Monday that the UAE was the biggest recipient of such licenses, with the UK signing off more than $14.5m in exports since 2015.

The transactions, which totalled more $94m, had reportedly taken place despite regulations stating that the UK should not export security products to countries that may use them for internal oppression, the paper said.

- Andrew Smith, spokesman for the Campaign Against Arms Trade

"There's a greater need than ever for the UK to be absolutely scrupulous in assessing the risk of UK telecoms technology being used unlawfully against human rights activists, journalists, and peaceful opposition figures," he told The Independent.

"It's just not clear that the UK is undertaking proper risk assessments when selling this equipment, and it's not clear whether UK officials are making any effort to track how the equipment is used in one, two or three years time."

The report comes just days after Downing Street announced it would resume arms sales to Saudi Arabia despite the devastating civilian death toll in Yemen.

The government said it reviewed claims that Saudi forces in Yemen had breached international law and found that any possible transgressions were "isolated incidents".

On Monday, Emily Thornberry, Labour's Shadow Trade Secretary, called on the government to publish the details of its assessment, but junior minister Greg Hands refused, telling parliament that the information the government received included confidential intelligence. Andrew Smith, a spokesman for the Campaign Against Arms Trade, said these two developments raised "serious questions and concerns".

"These sales are symptomatic of a dangerous and hypocritical foreign policy that has consistently prioritised arms exports over human rights," he told The Independent.

"Spyware and surveillance equipment is often used against human rights defenders. Many of the regimes buying the technology have a long history of inflicting brutal and repressive laws and targeting campaigners and activists.

"For companies and arms-dealing governments like the UK to be promoting and selling this kind of equipment is extremely irresponsible and reckless. It could fuel abuses for years to come."

According to the Armed Conflict Location and Event Data project (ACLED), an American NGO which tracks the conflict, more than 100,000 people have died as a result of the war in Yemen.

Iran Tensions
Iran warns of 'consequences' over US arms embargo push
US Politics
US did not 'assess risks' of civilian casualties in Saudi arms sale, watchdog says
Arms Trade
US senators push to block drone sales to Saudi Arabia, UAE 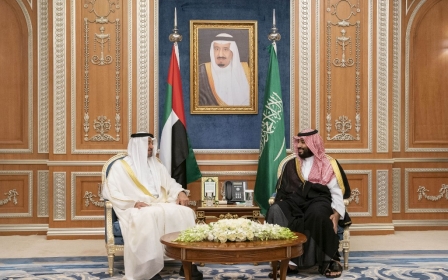