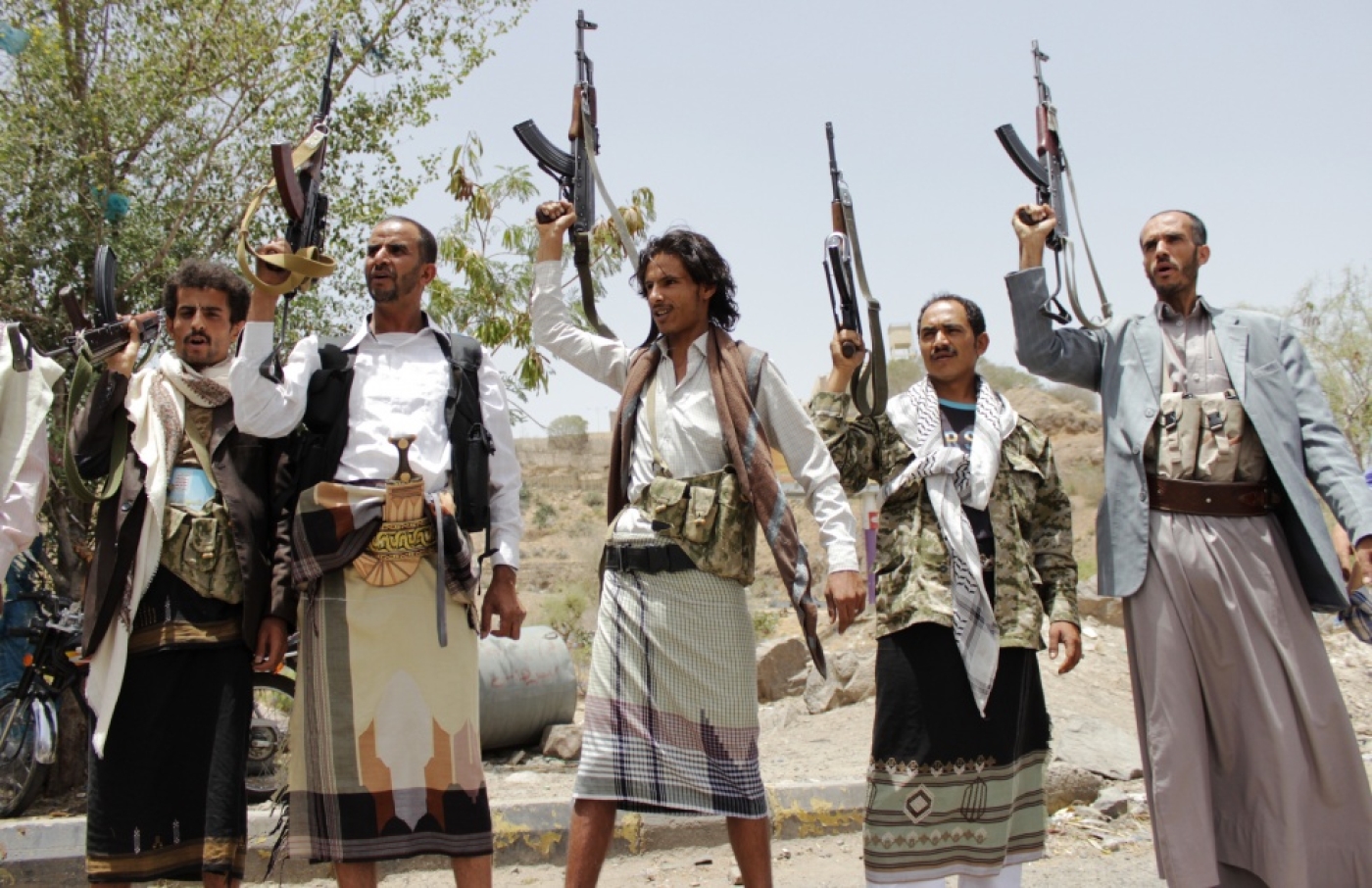 Supporters of the Shiite Houthi militia brandish their weapons in Yemen's second largest city of Taiz, on 10 April, 2015 (AFP)
By
MEE and agencies

The UN Security Council on Tuesday adopted a resolution imposing an arms embargo on Yemen's Houthi militia and demanding they pull back from territory they have captured.

"UK welcomes res 2216 on #Yemen. #UNSC made clear further measures would be taken if #Houthis failed to cease their aggression," the British UN mission said on Twitter.

Russia abstained from the vote, but did not veto the measure that was backed by the other 14 of the 15 council members.

Meanwhile, the UN rights chief called on Tuesday for investigations into the high level of civilian casualties that account for almost half of the 736 deaths recorded in the Yemen conflict.

A Saudi-led coalition launched air strikes on the Houthis and allied forces on 26 March but has so far failed to stop the militia's advance.

UN rights chief Zeid Ra’ad Al Hussein underscored the need for all parties to ensure that civilians are not attacked and to probe and punish breaches.

"Such a heavy civilian death toll ought to be a clear indication to all parties to this conflict that there may be serious problems in the conduct of hostilities," he said.

Zeid said attacks on hospitals and on civilians unconnected to the fighting were war crimes.

"Any suspected breach of international law must be urgently investigated with a view to ensuring victims’ right to justice and redress and to ensure that such incidents do not recur," he said.

Ravina Shamdasani, spokeswoman for the UN human rights agency, said 364 of the people killed were civilians, including 84 children and 25 women.

"We are in touch with parties on the ground and engaged with the Saudis" on the issue of the high civilian deaths, she said.

Iran, meawhile, said it has proposed a peace plan for Yemen that calls for a ceasefire followed by talks by all sides that would be mediated by foreigners.

"I proposed a ceasefire followed by all-inclusive Yemeni dialogue that is facilitated by others, leading to the formation of a government in Yemen that represents a broadly based community," said Iranian Foreign Minister Mohammad Javad Zarif.

Shiite Houthi militiamen - who Yemen says are backed by Iran - have seized swathes of territory in Yemen since they entered the capital Sanaa in September 2014, forcing government forces to flee.

The United States on Tuesday called on Iran to abide by the terms of the new UN embargo imposed on the Houthi militia in Yemen.

"And I think what would be most helpful from the Iranian side at this point is to respect this newly imposed UN arms embargo that was just passed today and stop supporting the Houthi," she said.

The resolution "really shows the Council will take action quickly in this regard, which is good," Harf said.

The spokeswoman reiterated that Iran has been "incredibly destabilizing in places in the region" and said the aim was to try to get all sides back to the negotiations on Yemen's future.

Hadi lashed out at Iran in a New York Times op-ed, saying its "hunger for power" was behind the Yemen conflict.

He accused Tehran of fuelling a "campaign of horror and destruction" by the militia.

The Houthi militiamen have allied with troops loyal to ex-president Saleh to fight Hadi loyalists.

Saleh, who was forced from power in 2012 following a year of nationwide protests against his three-decade rule, belongs to the same Zaidi sect of Shiite Islam as the Houthis.

Meanwhile, Houthi militiamen on Tuesday stormed the home of Yemen's newly appointed Vice President Khaled Bahah in the capital Sanaa and set up anti-aircraft batteries on its roof, according to a source close to Bahah.

The source, requesting anonymity, told the Anadolu Agency that the militiamen had ransacked Bahah's vacant residence in southern Sanaa before installing anti-aircraft guns on the roof.

The incident comes one day after Bahah – the incumbent prime minister – was sworn in as vice-president before President Abd Rabbuh Mansur Hadi.

The swearing-in ceremony took place in Saudi capital Riyadh, where Hadi is currently based.

Breaking : Houthis storm Vice President @KhaledBahah house in Sanaa ; hours after he was sworn in and put anti air crafts n his garden

A first consignment of medical supplies which arrived on Friday is currently being distributed in various parts of the country.

The arrival of a second supply flight is timely as the security situation worsens in Yemen with 18 out of 22 governorates now affected by the ongoing conflict.

Meanwhile, the ideological leader of Yemen-based Al-Qaeda in the Arabian Peninsula (AQAP) was killed in a drone strike this week, allegedly by the United States, AQAP said in a statement published Tuesday.

Ibrahim al-Rubaish, who in January accused France of surpassing the United States as the top enemy of Islam, was killed with several other militants in a "crusade raid" on Monday, the statement said, apparently referring to a drone attack that killed six people in southeast Yemen.

AQAP claimed the Charlie Hebdo attacks in Paris that killed 12 people in January 2015.

The United States is the only country that operates drones over Yemen.