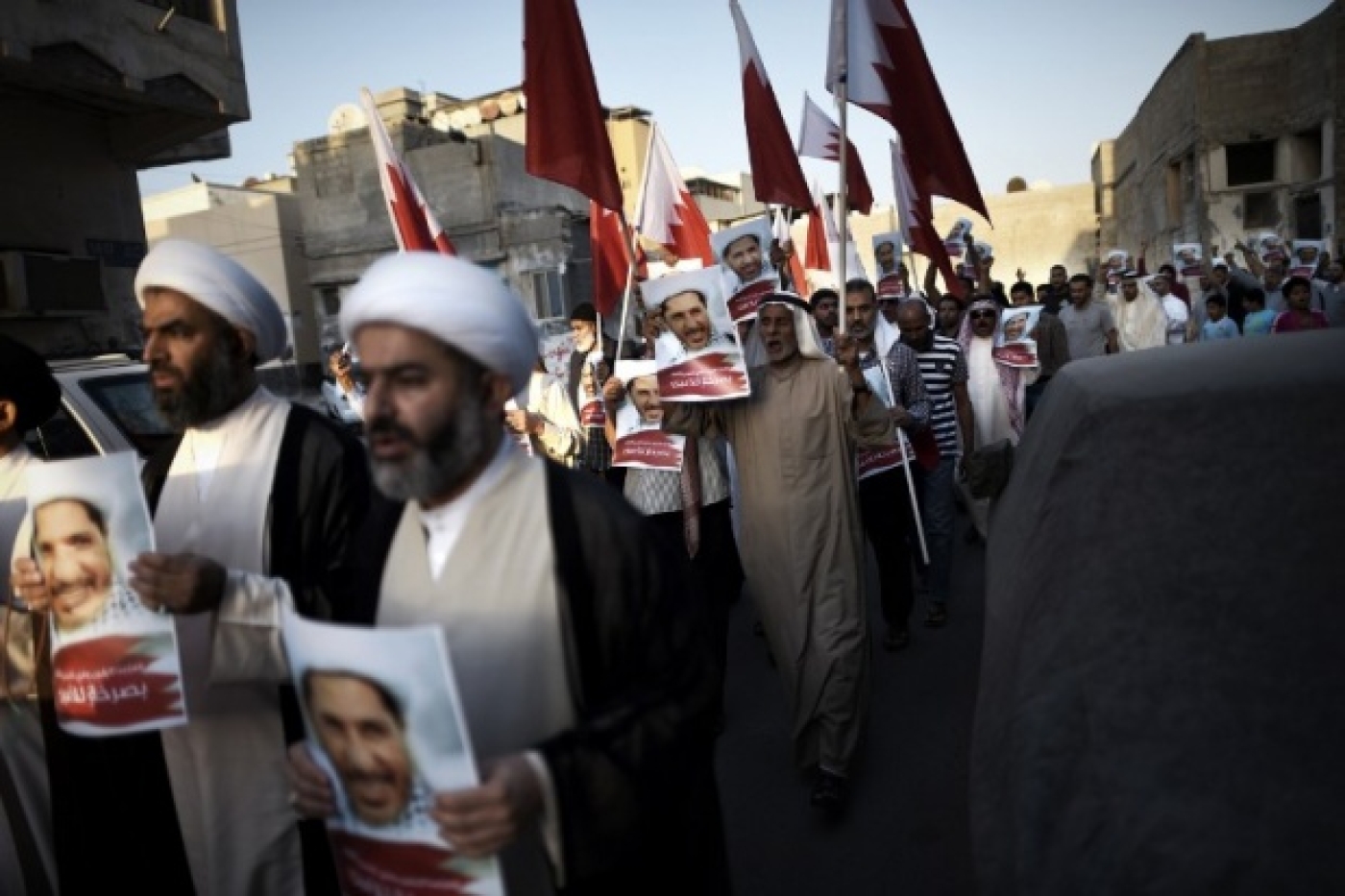 The uprising in Bahrain has largely fallen of the map in terms of international news coverage in recent months, sparing the imprisonment of prominent activist Nabeel Rajab and opposition leader Ali Salman.

However, a recent commentary on the tiny Gulf state by the BBC’s Security Correspondent Frank Gardner, in which he suggests the island is “largely peaceful”, has prompted debate among Bahraini activists, both inside and outside the country.

In 2011 Bahrain was hit by mass protests inspired by the Arab Spring, which saw hundreds of thousands of people take to the streets initially to demand political reform but later to call for the downfall of King Hamad bin Isa al-Khalifa.

With the king tottering on the edge of losing his grip on power, Saudi Arabia led a Gulf intervention against the revolutionaries in Manama, prompting fierce clashes that led to the deaths of dozens of protesters and numerous police officers.

The monarchy survived the testing days of 2011 but the subsequent four years has witnessed persistent rallies, accusations of widespread human rights abuses, and a royal commission that investigated the government’s response to the uprising.

Now, with war and conflict widespread across the region, hopes raised by the Arab Spring have been dampened, and the BBC’s Gardner wrote of how fatigue has overcome Bahrain’s protest movement and he explained that years of unrest have wearied the public.

“From all my visits to Bahrain I would say there is no appetite for revolution amongst [the] large silent majority,” wrote Gardner, who prior to joining the BBC in 1995 was a banker who worked for four years at the Manama-headquartered Gulf International Bank.

An unnamed western diplomat told Gardner that there is fatigue in the villages, home to the majority Shia population, many of who live in abject poverty, and that this has led to a sharp reduction in “street violence”.

However, an activist living in Sitra, the third most populous area in Bahrain, said this couldn’t be further from the truth.

“Here the movement that began in 2011 is still strong,” said Asma Darwish, a human rights activist with the European-Bahraini Organisation for Human Rights. “There are protests every night, in all the villages of Bahrain, and confrontations with the police are regular.”

Bahrain has a population of around 1.2 million people, half of which are non-nationals. Sitra, which is made up of several villages, is estimated to be home to around 100,000 people.

But for Bahrainis living outside in the capital Manama, which has an approximate population of 150,000 people, they only hear of the protests on social media websites.

“It is pretty quiet here,” said Yaqoob Slais, a member of the Fateh youth coalition, which supports political and judicial reform in Bahrain but supports the monarchy staying in power. “I know there are daily demonstrations calling for the release of [Wefaq leader] Ali Salman but I only see that through Twitter.”

“When I am out and about in hot spot areas such as Budaiyah highway, it is pretty quiet.”

The protests that rocked Manama in 2011 at the Pearl Roundabout, which was later demolished by the government, have been completely shut down. And the fact the capital is now free from demonstrations, burning tyres, and clashes between police and protesters, has fostered the perception that the revolution has petered out.

“I think this is why the world thinks our uprising has ended,” said Sitra resident Darwish. “But it has not ended. It is on going in the villages, where there is little media exposure.”

While the protests may be carrying on in the Shia villages, the end of rallies in the capital has signalled the failure of the opposition movement to foster national unity, according to Manama-based Slais.

“The buzz of the Arab Spring is definitely over. The opposition has consistently missed opportunities to seek national unity and consensus, leaving it in the state we see today – fragmented. Dialogue has failed,” he said.

“The [government] loyalists have never pushed for reforms – their stance is that there is an Iranian conspiracy and they must block everything that comes from the Shia opposition, especially Wefaq.”

But for exiled activist Maryam Alkhawaja, whose father Abdulhadi is serving a life sentence for his part in the uprising, the changing perception of Bahrain’s political crisis is symptomatic of a hardening crackdown, rather than the result of a lack of unity among Bahrainis.

“The difference between 2011 and 2015 is that the government has gone from a chaotic crackdown to a more institutionalised one,” she said. “This has reduced the visibility of abuses because the legal system is now being used to target activists, rather than public attacks.”

The government has been regularly accused of arbitrarily detaining protesters, torturing political prisoners, and using the judicial system to stifle free speech and free association, all of which they have denied.

After the king commissioned the independent Bahrain Independent Commission of Inquiry (BICI) in 2011 to investigate the government’s response to mass protests, a raft of reforms were recommended to end police abuse and to institute judicial reform, as well as remedying a host of other issues.

The BBC’s Gardner wrote that “abuses in policy custody have certainly been reduced”, however, Human Rights Watch contested this opinion in comments made to Middle East Eye.

“I think it’s too early to say abuses in custody have reduced,” said Nicholas McGeehan, Gulf researcher at the New York based watchdog. “We continue to receive disturbing accounts of serious torture and that's despite the fact we have no access and nor does the special rapporteur on torture.”

Alkhawaja said that abuses have not only not reduced, they have gotten worse, citing that the “details from inside Jau Prison about the treatment of political prisoners is worse now than at any point in the past four years.”

But Manama resident Slais believes there has been an improvement in police behaviour, brought about by the recommendations made in the BICI report.

“Post-BICI has improved the way police have dealt with demonstrators, rioters etc,” he said. “From what I’ve seen the police only use force now – firing tear gas – when they are faced with Molotov cocktails or burning tyres.”

Competing narratives define Bahrain, however, and for those living in the villages of Sitra, the idea of reform is a fanciful one.

“I was wishing and hoping for the king to be a reformer,” said Darwish. “But there has not been one single indication from the ground, where I live, that there is any sort of reform being implemented. There is no reform going on in Bahrain.”

Darwish’s activist husband Hussain Jawad was recently released on bail from prison, after being detained for three months over charges of having incited hatred against the king while doing his human rights work.

He says that in prison he was “subjected to horrible sexual, physical, and psychological torture”.

“The intelligence officers told my husband in prison that they have the green light to eliminate you all,” Darwish said.

The political prisoner population in Bahrain, according to an exiled opposition activist, is at a higher rate now than ever before.

“We believe there to be 4,000 political prisoners at any one time,” said Sayed Alwadaei, director of advocacy at the London-based Bahrain Institute for Rights and Democracy.

“This is on an island with an indigenous population that does not exceed 800,000 people. I believe this means Bahrain has the highest per capita rate of political prisoners in the world.”

Alwadaei said that the Wefaq opposition group have been denied over 90 requests to hold authorised protests, and it is this, rather than fatigue, that has given the impression of a dulling of the uprising in Bahrain.

“That’s why things may appear to have calmed down, or normalised, but in fact what we are seeing is a lot more control of public space,” he said. “The crackdown is a lot more incisive and has heightened in its severity.”

Despite commentary suggesting Bahrain has implemented reforms, and that abuses have reduced, campaigning groups have continued to rank the Gulf state very poorly in its rights record. Freedom House says Bahrain is “not free”, the Committee to Protect Journalists says journalists are being arrested “in record numbers”, and Reporters Without Borders rank the country 163rd in the world for media freedom.

While youth activist Slais maintains that the human rights situation has “improved”, he said there has not been “any meaningful political reform”. He also believes that, rather than rights abuses, the most alarming issue for the country lies in the economy.

“Parliament is discussing the budget for the country – it seems clear that the government is pushing ahead with austerity measures, due to low oil prices etc,” he said.

The government is proposing to cut subsidies that have kept the price of fuel, electricity, water, and meat artificially low.  The austerity measures are likely to be implemented due to concerns over a significant public debt, which in 2013 sat at 44 percent of Gross Domestic Product.

“There is a lot of discontent from Bahrainis at these policies that they feel threaten their livelihoods,” Slais said. “But unfortunately the government will not face a lot of opposition due to a lack of a vibrant, unified, political opposition.”

This perception contrasts significantly from that of Betsy Mathieson, secretary-general of the Bahrain Federation of Expatriates, who told the BBC that the economy has improved significantly.

“The economy is really flourishing,” she said. “Hotel occupancy is sharply up, the government is investing heavily in tourism.”

However, London-based advocate Alwadaei said the economy is “collapsing” and that it is “clear the vast majority of oil revenue goes to the Ministry of Defence and Ministry of Interior to maintain the security crackdown.”

More than a quarter of all public spending goes to defence and security, according to Chatham House’s Jane Kinninmont, who has written that this policy is unlikely to be challenged by parliament because of “the heightened influence of the security establishment since 2011”.

With the economy under strain and political dialogue stalled for over a year, Bahrain appears to be in a holding pattern of withstanding protests and economic worries, while spending millions on public relations firms to present an image of stability to the international community.

For Human Rights Watch, the solution to Bahrain’s problems do not lie in the security crackdown.

“With all the advocates of peaceful protest either locked up or facing jail it's difficult to see how there's going to be a political accommodation and the grievances at the heart of the unrest remain unaddressed,” said McGeehan.

“Bahrain can't jail and torture its way out of the mess it created.”

Despite Alwadaei and Alkhawaja’s belief that the security crackdown is building up a tinder box of anger and resentment that will explode at an indeterminate point in the near future, youth activist Slais does not envision such an event.

“I can’t us being taken back to 2011,” he said. “The opposition is too fractured and they are conflicted on how to move forward. Bahrain is not about to witness mass protests on the scale we saw at the Pearl Roundabout.”

But for Asma Darwish and her husband Hussain Jawad in Sitra, the uprising still has its fire and they believe the political impasse will only be solved through peaceful reform and dialogue, or there will be a violent turn that will “impact all Bahrainis.”

And despite the threat of imprisonment, the family, who say thousands of other families share their views, remain steadfast in campaigning and protesting for their country to have a democratic revolution.

“We are strong and committed to our values of human rights and democracy,” she said. “We look at the story of Nelson Mandela – he was in prison for decades because of his commitment to freedom – this is the struggle and we are prepared to endure and make the necessary sacrifices for the freedom of Bahrain.” Arab Spring
Does the UK have a red-line when it comes to Bahrain's rights abuses?
Sayed Alwadaei