One guard sentenced to life, three others get 30 years for mass killings in Baghdad in 2007 A helicopter of Blackwater security firm flying low in central Baghdad on 5 July, 2005 (AFP)
By
MEE and agencies

A former Blackwater guard was sentenced to life in prison and three others received 30-year sentences Monday for their roles in a 2007 mass shooting in Iraq that left at least 14 civilians dead.

The four ex-employees of the US private security firm were convicted last October on an array of charges ranging from first degree murder to voluntary manslaughter stemming from the incident in Baghdad's Nisour Square.

During a two-month trial in US federal court in Washington, a jury heard how the four defendants opened fire with sniper rifles, machine guns and grenade launchers in the bustling square as they escorted a diplomatic convoy.

Iraqi officials say 17 civilians were killed in the shooting. A toll compiled by American investigators recorded 14 deaths. A further 18 Iraqis were injured.

The other three defendants - Paul Slough, Evan Liberty and Dustin Heard - received sentences of 30 years, the minimum by law for the charge of using a machine gun in a violent crime, plus a token additional day for each of the other counts.

"The wild thing that happened here can never be condoned by the court," Lamberth told the court, saying he had taken into account statements made on behalf of the four defendants.

But he added: "It's clear these fine young men just panicked."

But Assistant US Attorney T Patrick Martin said that other Blackwater contractors “chose to abide by their training, and not to shoot first and make excuses later.”

“This is one instance where [the other contractors] could not back the actions of their teammates,” Martin said, according to USA Today.

“You are entrusted to do a job with deadly weapons, but you must use them only when necessary, and their use must be justified.”

Relatives of two victims of the shootout were present in the courtroom, including the mother, father and siblings of nine-year-old victim Ali Mohammed Hafedh Abdul Rezzaq.

“Today we will see who wins, the law, or Blackwater,” said Mohammed Kinani, Ali’s father, at the hearing.

The killings on 16 September 2007 deepened Iraqi resentment of America's involvement in the country.

In final statements, all four defendants protested their innocence and asked for leniency. Slatten asked for the verdict against him to be overturned.

But Lamberth said he fully supported the jury's decision.

Before the killings, Slatten allegedly told acquaintances he wanted to "kill as many Iraqis as he could as 'payback for 9/11',", according to court documents. Iraq at War
Blackwater on trial for 2007 Baghdad murders Human Rights
Beyond the US Senate torture report 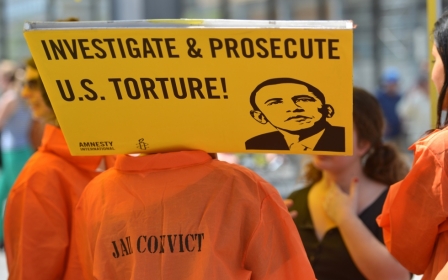