US coalition 'killed scores of Russian mercenaries' in Syrian battle

A US-led coalition attack on pro-Syrian government forces killed at least six Russian mercenaries - and reportedly scores more - who were fighting on the side of Bashar al-Assad, multiple reports from Russia suggest.

The coalition attacked advancing pro-Assad troops on Wednesday, 7 February as they threatened the US-allied, Kurdish-dominated Syrian Democratic Forces in Deir Ezzor province. Initial reports stated up to 100 pro-Assed fighters had been killed in the coalition response.

Statements at the time, carried by Syrian television stations, called the bombing a "new aggression" and "an attempt to support terrorism" with pro-government reporters describing those killed as "local people fighting (Islamic State) and the SDF".

But reports from Russian security groups suggest that many of those hit were Russian mercenaries serving on the side of the Syrian president. The reports coincide with the release of the names on Twitter of six Russian men killed in Syria last week. However, the total number is believed to be far higher.

The Kremlin, which is Assad's principal backer, has refused to become embroiled in the fallout of the hostilities. The Russian defence ministry stated that fighters killed by the US strikes had not co-ordinated their movements with the Russian military.

Both sides have stuck to the "de-confliction" systems in place between US and Russian forces inside Syria to prevent direct escalation.

The Kremlin has stressed repeatedly since Wednesday that no members of the Russian armed forces were killed, and that any Russians fighting alongside the Syrians were mercenaries.

Reports from inside Russian paramilitary units suggest up to 200 Russians had been killed.

Aleksandr Averin, a member of the Other Russia nationalist party, said Kirill Ananiev, a party member who had been in Syria for about a year, was killed in the fighting, and said there were other "substantial losses".

"Kirill died on 7 February in Syria, near the Euphrates River, as a result of a strike by the American coalition," Averin told the New York Times, adding that he was aware of "substantial losses" suffered by "paramilitary structures with ties to Russia".

Ionov said not all those killed were Russian, and that some were from other parts of the former Soviet Union. "More than 200 is the current estimate, we cannot know the exact number yet, but most of them were Russian," he said.

Ionov said he was speaking out because he wanted the Russians killed to be officially recognised for their sacrifice - regardless of whether they were fighting for their country or for money.

Another victim, Vladimir Loginov, died "in an unequal fight on 7 February in the area of Syria’s Deir Ezzor", according to a statement published online by his paramilitary organisation, the "Baltic Cossak Union".

Separately, the Conflict Intelligence Team, a prominent Russian opposition group, stated that at least four mercenaries working for the Russian "Wagner" organisation were among those killed.

They were named as Alexi Ladigin, of Ryazan, Stanislav Matviev, Igor Kostorov and Vladimir Loginov, of Kaliningrad.

The US-led forces reportedly used overwhelming firepower in Wednesday's attack - including artillery, Apache helicopters and an AC-130 Spectre gunship, to "repel an act of aggression".

Fighting continued after the Wednesday strikes. On Saturday, US forces struck a Russian-designed T-72 tank in roughly the same location as the fighting on 7 February.

"The tank had been manoeuvring with coordinated indirect fire on a defensive position occupied by Syrian Democratic Forces and coalition advisers," said a US military spokesman.

"The defensive position was within effective range of the hostile weapons systems.

"Coalition officials maintained regular contact with Russian counterparts via established deconfliction lines to avoid misperceptions and miscalculations that could endanger each other’s forces." 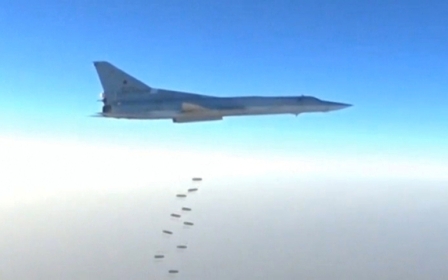