Elsheikh is the last member of the notorious Islamic State cell to be sentenced to prison. Families of the victims say it is only one more step towards justice 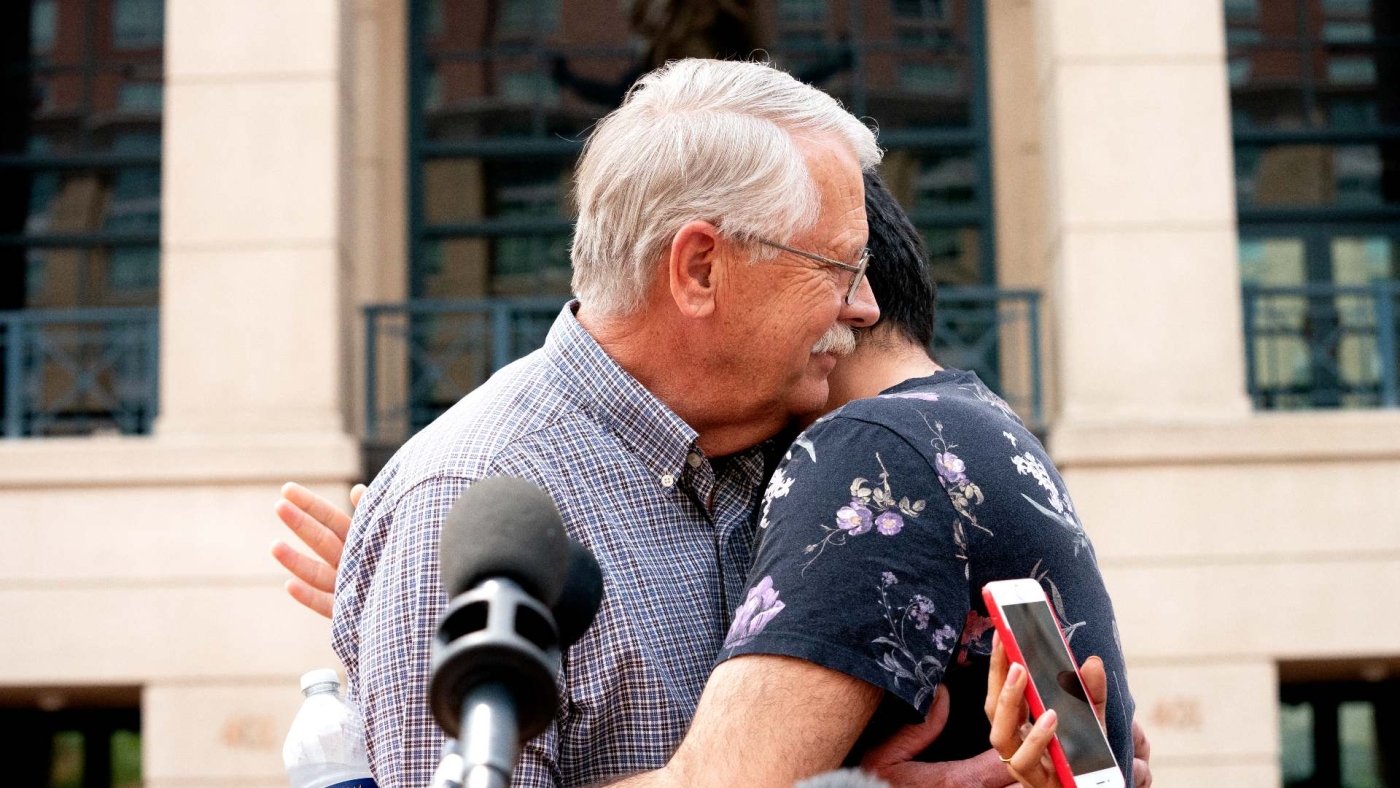 Carl Mueller, the father of Kayla Mueller, an American killed by IS militants, embraces Rodwan Safer Jalani, a friend of Kayla’s, outside a federal courthouse in Virginia on 14 April 2022 (AFP)
By
Umar A Farooq
in
Washington

A US federal court on Friday sentenced a former British citizen to life in prison for his role in an Islamic State (IS) group cell that beheaded hostages in Syria and Iraq, and took captive dozens of people.

El Shafee Elsheikh, a 34-year-old who was born in Sudan and grew up in the UK, was found guilty earlier this year of eight charges related to his role in the notorious IS cell known as "the Beatles", including lethal hostage-taking and conspiracy to commit murder.

'As grateful as I am for this sentence, it is a hollow victory'

In convicting Elsheikh, the jury concluded that he was one of the notorious "Beatles" - IS captors nicknamed for their accents and known for their cruelty in torturing and beating prisoners, forcing them to fight each other until they collapsed and even making them sing cruel song parodies.

In addition to being found guilty of the deaths of four Americans - US journalists James Foley and Steven Sotloff and aid workers Kayla Mueller and Peter Kassig, who were reporting on or supporting victims of the Syrian war - he was also implicated in the deaths of British, Japanese and Norwegian captives.

The life sentence handed down to Elsheikh was the highest punishment he could receive after a deal was struck with the UK whereby British authorities handed over custody of him to the US in exchange for a guarantee he would not face the death penalty.

"Let this sentencing make clear to all who dare to kidnap, torture or kill any American citizen abroad, that US Justice will find you wherever you are, and that our government will hold you accountable for your crimes against our citizens," Foley's mother Diane said outside of the courthouse in Alexandria, Virginia, following the sentencing hearing on Friday.

"But as grateful as I am for this sentence, it is a hollow victory.

"Our country has lost four of its very best citizens. Our families lost our loved ones forever. And now Elsheikh and [Alexanda Amon] Kotey have lost their freedom, country and families. It's a tragic cycle of violence and heartbreak for all involved."

The trial against Elsheikh lasted six weeks and included testimonies from several former hostages of "the Beatles". Some family members of the victims also attended the trial in northern Virginia.

It was filled with stories of how former hostages feared the presence of "the Beatles", including one account where multiple hostages were forced to fight each other for the entertainment of their captors, and if they didn't they would be waterboarded.

"We extend special thanks to the released hostages who testified. They taught us a lot about what our son and the other hostages endured. And their testimony was essential in proving guilt," said Kassig's mother Paula.

ElSheikh was given the opportunity to speak during the hearing, but declined to do so. The family members of the victims said his decision not to speak "speaks volumes" about his role in the killings. Elsheikh was one of four IS militants belonging to the execution squad that had been given the nickname "the Beatles". The cell garnered international attention after releasing videos of the murders of the Americans, among others. The videos sent shockwaves globally, and showcased the brutality of the IS group.

Elsheikh and the other IS members were also allegedly involved in the abductions of at least 27 people in Syria from 2012 to 2015.

Until now, he had been the last member of the IS execution squad that was alive and not in prison.

Mohammed Emwazi, known as "Jihadi John," was killed by a US drone in Syria in November 2015, while Aine Davis was recently arrested at a UK airport after being deported from Turkey, where he was serving a seven-and-a-half-year sentence for membership of the terror group.

Elsheikh and the fourth person, former British national Alexanda Amon Kotey, 37, were captured by a Kurdish militia in Syria in January 2018.

They were turned over to US forces in Iraq, stripped of their British citizenship, and flown to Virginia in October 2020. Kotey pleaded guilty and was also sentenced to life in prison in April.

One more step towards justice

The families said that the hearing on Friday was only one more step towards achieving justice, and that their efforts now would be focused on bringing attention to American hostages that are currently detained abroad.

According to the James Foley Foundation, there are currently 67 publicly disclosed cases of US citizens being wrongfully detained or held hostage in other countries.

The Biden administration recently introduced an executive order that would aim to improve efforts to free American hostages and detainees.

"No family should have to endure this, but this continues. Currently, we have more than 67 of our US nationals currently wrongfully detained, held hostage abroad simply for being American," said Diane Foley.

"So I call on President Biden to employ our shrewdest negotiations to quickly bring these innocent Americans home - less they die in captivity, as our sons and daughters did."