Anti-Iran conference in Warsaw did not produce new initiatives; it emphasised existing alliances The summit in Warsaw was officially called a "Ministerial to Promote a Future of Peace and Security in the Middle East," and despite the breadth of issues threatening peace and security in the region, the focus was singular: Iran.

The US-led anti-Iran conference in the Polish capital, which concluded on Thursday, did not produce new initiatives, but it emphasised existing alliances and reiterated old talking points against Tehran, analysts say.

"They have put out in the open what has been suspected for several years and confirmed many times over, that there has been a nexus between particularly Riyadh and Israel and also now the UAE," said Saeed Khan, a senior lecturer in Near East studies at Wayne State University in Detroit.

The summit was attended by US Vice President Mike Pence, US Secretary of State Mike Pompeo, Israeli Prime Minister Benjamin Netanyahu and top diplomats from several Arab Gulf states. But it was largely overlooked by European countries, which sent low-level representation or skipped the summit altogether.

Ryan Costello, policy director at the National Iranian American Council (NIAC), said the administration was trying to isolate Iran, but found itself isolated.

The speculation for Iran's demise are extremely premature

Last year, Trump left the Joint Comprehensive Plan of Action, a multinational agreement signed by his predecessor, Barack Obama, which saw Iran drastically scale back its nuclear programme in exchange for lifting sanctions.

The European Union has refused to follow in the White House's footsteps, vowing to honour the agreement as long as Tehran sticks to its end of the bargain, a stance reiterated by EU diplomatic chief Federica Mogherini after the summit on Friday.

Washington officials have said they hope that sanctions will strain the Iranian economy enough to make the government rethink its policies.

"They're weaker. Their economy is a wreck," Pompeo said of Iran in an interview with CBS News on Thursday.

Critics, however, are less convinced, given the broad nature of this objective.

"What do we mean when we say: 'The sanctions work'? Because if something works, it means that you have achieved a goal. And to achieve a goal, you have to have a goal," John Limbert, a former US diplomat, said at an event at the Atlantic Council in Washington on Tuesday. "I'm not sure what the goal is of the sanctions."

However, he questioned whether sanctions on entire industries would stir up change within Iran as Pompeo hopes.

Des Roches said reimposing sanctions gave Iran's rulers a chance to blame the US for their own "inefficiencies, the domestic corruption and the driving hand of the Revolutionary Guards".

"Because of the endemic corruption in Iran," he said, "the Revolutionary Guards may not suffer most of the harm of sanctions. It will be people who don't have access to the fixed system."

Costello, of NIAC, echoed Des Roches' remarks, saying that the government "does just fine" under sanctions.

"They control smuggling operations, and they can bust the sanctions, but if you're a middle-class person who perhaps has a small business, you're decimated by the impact on inflation, on people losing their jobs," he said. "You can't weather the storm, but the government can and has before."

As for the possibility of a popular uprising that would spark major change in the Iranian government, Costello said it is an unrealistic outcome, given that the Iranian opposition remains fragmented.

Iran has faced leaderless, sporadic protests over worsening economic conditions since late 2017, but the demonstrations tapered off after a wave of arrests early last year.

"There's a lot of visceral anger at the government for mismanaging the economy and repressing the population," Costello said.

"But I think a lot of Iranian people have said: 'Look around the region; look at Syria; look at what's happening in Afghanistan and Iraq. We don't want to go down that path'."

In Syria, the civil war has displaced millions of people and killed hundreds of thousands without toppling President Bashar al-Assad. Iraq and Afghanistan, which share borders with Iran, are still struggling to find political stability or security since the US-led invasions in the early 2000s.

The discouraging regional examples for "regime change" efforts, whether led by an internal uprising or a foreign military intervention were even noted by Emirati Foreign Affairs Minister Abdullah bin Zayed Al Nahyan on a panel in Warsaw on Thursday.

"But we need a serious regime behaviour change," he said, according to a video leaked to Israeli media.

Des Roches said administration officials think the Iranian government is inherently unstable and vulnerable because of its autocratic structure.

He explained that Pompeo, National Security Advisor John Bolton and Trump appear to believe that an authoritarian state like Iran would "collapse on its own weight" if Washington succeeds in modifying the government's behaviour, including curbing the domestic economic role and regional activities of the Revolutionary Guards.

Hawks in the administration

Khan said there is an "extreme anti-Iran wing" within the US administration that is seeking nothing short of "regime change" in Iran, "even if that means direct military confrontation".

The prospect of war was raised in Warsaw when Netanyahu's office tweeted a video of the Israeli premier saying in Hebrew that Israel is meeting with Arab representatives "to advance the common interest of war with Iran".

The video was deleted and reposted with an alternate translation, replacing "war with Iran" with "combating Iran".

Trump's lawyer Rudy Giuliani, an Iran hawk who does not have an official government post, also was in the Polish capital..

Earlier this week in Warsaw, Giuliani addressed a rally for opposition group Mujahideen-e Khalq (MEK), which advocates overthrowing the government in Tehran.

Both Bolton and Giuliani have been reportedly paid for previous speaking engagements with the MEK, which had been designated as a terrorist group in the US until 2012.

But the intelligence community is not as hard line on Iran, Khan said. Director of National Intelligence Dan Coates said in a report last month that Iran is still in compliance with the restrictions of the nuclear deal despite the US exit.

"We continue to assess that Iran is not currently undertaking the key nuclear weapons-development activities we judge necessary to produce a nuclear device," the report said.

Khan called the assumption that Iranian government would fall because of economic pressure "hubristic".

He outlined three reasons why Iran will not come down to its knees because of the pressure: the resilience of Iranians, exterior threats that would galvanize them and the gaps within the sanctions regime, including other countries' willingness to circumvent them.

"The speculation for Iran's demise are extremely premature." Syria War
Putin: Russia, Turkey and Iran say US pullout from Syria is a 'positive step' 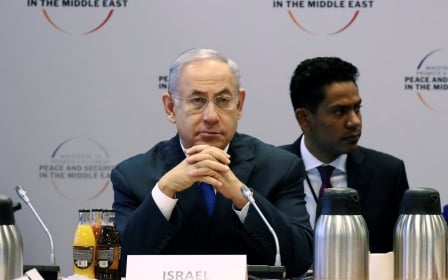