US sanctions Hezbollah-linked firms in Lebanon and West Africa

US imposes sanctions on six people and seven entities based in Sierra Leone, Liberia, Lebanon and Ghana The head of Hezbollah, Hassan Nasrallah, delivers a televised speech to supporters (AFP/file photo)
By
MEE and agencies

The Trump administration on Friday imposed sanctions on six people and seven financial entities that it said are linked to Lebanon's Hezbollah.

"The administration is determined to expose and disrupt Hezbollah's networks, including those across the Middle East and West Africa, used to fund their illicit operations," US Treasury Secretary Steven Mnuchin said in a statement.

The six sanctioned individuals include five Lebanese and one Iraqi, most of them linked to Al-Inmaa Engineering and Contracting, the Treasury Department said. The seven entities are firms based in Sierra Leone, Liberia, Lebanon and Ghana, the statement said.

Senior Trump administration officials said the sanctions are part of an aggressive move against Hezbollah to try to limit the influence of Iran.

The officials, briefing reporters at the White House on condition of anonymity, said the administration is working to reverse what it considers a more lackadaisical approach towards Hezbollah by president Barack Obama after the 2015 Iran nuclear deal went into effect.

More such targeted sanctions are expected in the months ahead, they said.

The officials said Hezbollah is already under financial strain as it continues to pay for costly operations in Syria and Yemen. The goal is to get European allies to join the United States in increasing pressure on the group, they said.

Hezbollah is fighting alongside government forces in Syria. It denies involvement in the Yemen war, although the Lebanese organisation's leaders are vocal in supporting the Houthi rebels against the Saudi-backed bombardment campaign.

The six individuals were targeted because they are linked to financier Adham Tabaja and his company, Al-Inmaa Engineering and Contracting. The officials described Tabaja as among the top five Hezbollah financiers at the moment.

As a result of the Treasury designations, all their assets subject to US jurisdiction are blocked and Americans are prohibited from engaging in transactions with them.

During a visit to Lebanon last month, the US Treasury's assistant secretary for terrorist financing, Marshall Billingslea, "urged Lebanon to take every possible measure to ensure [Hezbollah] is not part of the financial sector," the US embassy said in a statement on 23 January.

Lebanese politicians have warned that US sanctions on Lebanon’s banking sector may cripple the country’s already struggling economy. 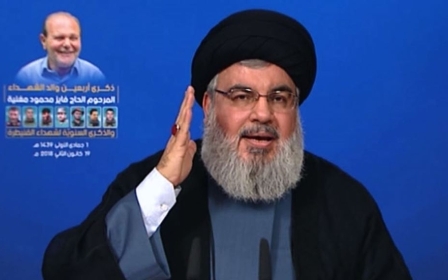