'Nobody really knows what's going on': Iraq caught between US and Iran again

'This White House does not have a clear policy on how to deal with Iraq - they see Iraq through a lens of anti-Iran rhetoric,' Iraqi MP tells MEE 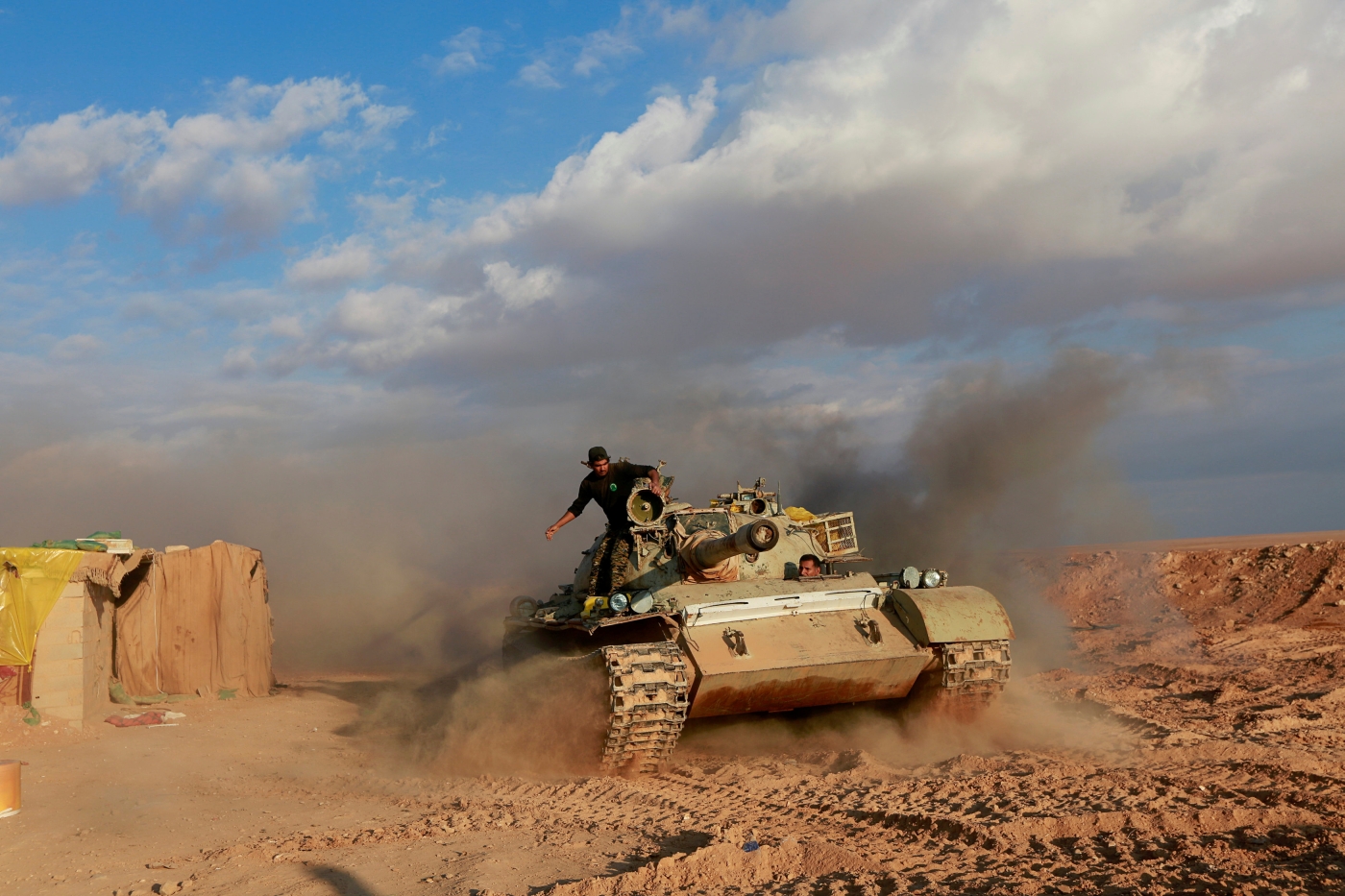 PMU fighters ride in a tank near the Iraqi-Syrian border in al-Qaim, Iraq (Reuters)
By
Alex MacDonald

With tensions once again ratcheting up between the US and Iran, Iraq is, as usual, stuck in the middle.

On Wednesday, the US announced it was withdrawing all non-essential staff from the capital Baghdad and the Kurdish capital Erbil following an unspecified threat from Iran-linked forces.

How is the Middle East reacting to increasing US-Iran tensions?
Read More »

Iraq has long been a battlefield for a proxy clash between US and Iranian interests. Thousands of US troops are still based in the country, while Iran provides financial and ideological support to a number of armed groups and political parties.

Just as many Iraqis were hopeful their country was pulling itself out of a long period of bloodshed and instability, it looks like the drums of war could be beating again.

Despite the threats from armed groups, many in Iraq viewed with incredulity claims by the US that the threat from Iran-backed groups was enough to warrant pulling staff from the country.

Iraqi Prime Minister Adel Abdul Mahdi on Tuesday told reporters that the Iraq side had not observed "movements that constitute a threat to any side. We clarified that to the Americans - the government is doing its duty to protect all parties."

The US has had personnel in Iraq in a wide array of capacities since it invaded the country in 2003. Threats against them have been frequent and numerous since then, particularly at the height of the anti-occupation insurgency in the middle of the first decade of the century. And yet, there was no pullout of staff during that period.

One Iraqi government official, who spoke on condition of anonymity because he is not authorised to speak with the media, said that the excuses given by the US were "not at all" being taken seriously by Iraq.

"There is an increase in diplomacy, an increased number of visits by foreign affairs ministers or phone calls with them, visits by ambassadors," he said.

However, apart from somewhat greater attention being paid to the news, there was little planning going on for a possible future conflict.

"Nobody really knows what's going on," the official said

"That lack of clarity is what is driving some concerns," he explained.

Any conflict between Iran and the US would inevitably have a huge impact on Iraq.

According to the Iran-Iraq Chamber of Commerce, of $44bn Iranian non-oil exports, around $9bn worth of goods were exported to Iraq in the year to March, a 36 percent year-on-year increase, while as much as 40 percent of Iraqi electricity is thought to come from Iranian gas plants.

Despite renewing sanctions on Iran in November, the US has been repeatedly forced to issue waivers to Iraq, knowing full well how reliant the country is on the Islamic Republic.

Sarkawt Shams, an MP with the New Generation party, told MEE that the US decision was "immature" and based on an "inaccurate" assessment of the threats.

"There is chaos in the White House over how to handle Iraq," he said. "This White House does not have a clear policy on how to deal with Iraq - they see Iraq through a lens of anti-Iran rhetoric."

Shams said that he was concerned that the US move would end up harming relations between the two countries, which he hoped would have been strengthened in a post-Islamic State (IS) era.

"We were hoping that after the defeat of IS that we could shift relations between our two countries from military to economic and trade cooperation - that we could have the US invest in Iraq's economy, not just military capability," he said.

All this is likely to prove a headache for Abdul Mahdi, who concluded a visit to Turkey on Thursday.

Iraq still does not have a defence or interior minister, more than a year after parliamentary elections.

Reuters quoted two Iraqi military sources as saying that US Secretary of State Mike Pompeo had told Iraqi officials during a surprise trip earlier this month that they would have to keep Iran-backed armed groups in check.

"They said if the US were attacked on Iraqi soil, it would take action to defend itself without coordinating with Baghdad," the source said.

During a trip by Donald Trump to Iraq in December, a visit that stoked further controversy as the president chose not to meet with Iraqi officials, the former reality TV star broke with the official US policy line that troop deployment was purely aimed at targeting IS and said that it would also be monitoring Iran, comments that enraged many Iraqis.

Husham al-Hashimi, a security analyst based in Baghdad, said the controversy had "embarrased" Abdul Mahdi, who he said was attempting to tread "calmly and cautiously with the increased tension between Washington and Tehran".

"As an Iraqi citizen from outside the government and the parties, I am very anxious about the deterioration of the Iraqi economy," Hashimi told MEE. "Investors are worried because they are scared about the collapse of the Iraqi dinar against the dollar."

He added that, unless US embassy officials were able to convince their bosses in Washington otherwise, "there is a real fear no one can stop this".

A wide array of countries have pushed for the US and Iran to tone down their rhetoric and prevent an escalation following an attack on oil tankers in the Gulf on Monday. Get out: Iraqi MPs push laws calling for US troop withdrawal
Read More »

Even the normally hawkish prime minister of Israel, Benjamin Netanyahu, was quoted by Israeli Channel 13 as telling top officials to "take steps to isolate Israel from any developments and ensure Israel is not dragged into this escalation".

Iraq has suffered decades of violence and unrest, including separate wars with both the US and Iran.

The hope for many now is that their country can both stabilise and begin to assert itself as an independent player in the region, and stop being the Middle East's battlefield.

"The point I discuss with officials and my colleagues in parliament is that we need to have a real Iraqi foreign policy, which we do not have," Shams said.

"Iraq needs to be careful about its relationship with two countries, the US and Iran. Not to intervene in their conflict, but to convince both countries that Iraq is neutral and not taking sides and to bring business back to Iraq beyond the security industry and beyond military companies - so far we have failed to do that, and failed to normalise Iraq's role in the international community." Iran Tensions
How is the Middle East reacting to increasing US-Iran tensions?