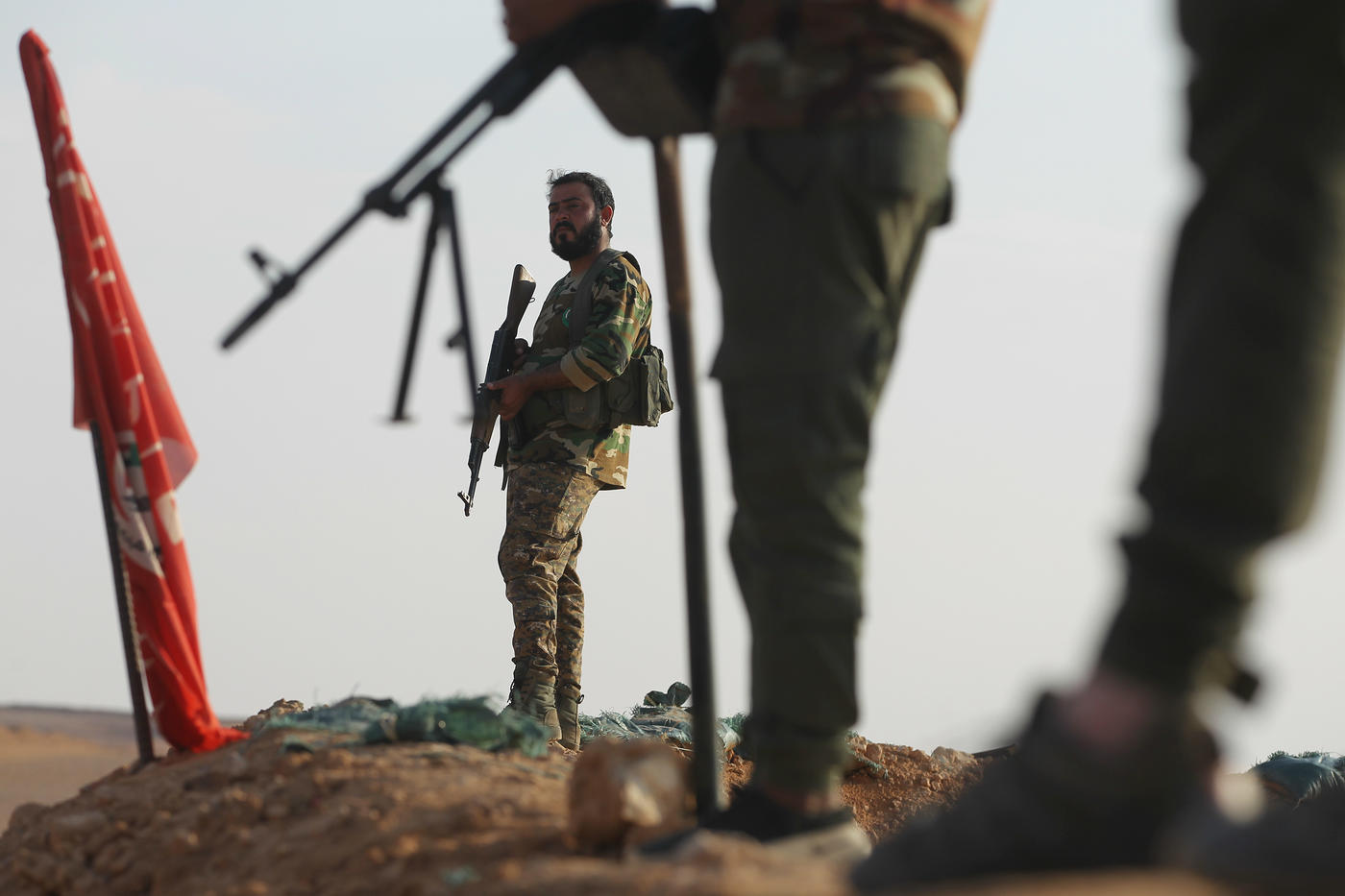 Three of the dead were Iraqi soldiers and two policemen, the military statement said, adding that 11 Iraqi fighters were also wounded, some of them critically. The civilian was a cook working at the unfinished Karbala airport, where another civilian employee was also wounded in the raids.

The volley of strikes was in response to a rocket attack on an Iraqi base late on Wednesday that killed two US military personnel and one British soldier.

Earlier, the Pentagon said it had targeting five weapons-storage facilities used by Kataeb Hezbollah - including facilities used to store weaponry for past attacks on US-led coalition troops.

Iraq's military said that the US air strikes had hit four locations in the country.

"Instead of dangerous actions and baseless accusations, Mr Trump should reconsider the presence and behaviour of his troops in the area," foreign ministry spokesman Abbas Mousavi said in a statement, hours after the US strikes.

British Foreign Secretary Dominic Raab said the US air strikes in Iraq were a "proportionate" response to Wednesday's rocket attack.

"The response to the cowardly attack on coalition forces in Iraq has been swift, decisive and proportionate," Raab said in a statement. "We will continue working with our partners to ensure those responsible for these deplorable acts will be held to account.

"UK forces are in Iraq with coalition partners to help the country counter-terrorist activity and anyone seeking to harm them can expect a strong response."

The US military did not estimate how many people in Iraq may have been killed in the strikes, which officials said were carried out by piloted aircraft.

But there was no indication of the kind of high-profile killings that Trump had authorised in January, when the US targeted top Iranian general, Qassem Soleimani.

US Defence Secretary Mark Esper, in a statement detailing the strikes, cautioned that the US was prepared to respond again, if needed.

"We will take any action necessary to protect our forces in Iraq and the region," Esper said.

Trump had been quick to authorise the US military to respond following Wednesday's attack in Iraq, in which fighters had fired around 30 Katyusha rockets from a lorry, striking Iraq's Taji military camp north of Baghdad. After Soleimani's killing, Iran fear-mongers are on overdrive
Read More »

Of the rockets fired, about 18 had hit the base. No one has claimed responsibility for the attack.

It had been the third time in recent months the US military had lashed out against Kataeb Hezbollah.

It had killed more than two dozen fighters in December in response to an attack on an Iraqi base that had killed a US contractor.

The rocket attack on Taji took place on what would have been Soleimani's 63rd birthday.

Earlier on Thursday, just hours after the attack on Taji, an air strike in eastern Syria had killed 26 Iraqi militia fighters, an activist group said.

The air strike killed members of the Iran-backed Hashd al-Shaabi, an umbrella group of which Kataeb Hezbollah is a member, in Al Bukamal near the border with Iraq, according to the UK-based Syrian Observatory for Human Rights

The Observatory said the strike had probably been carried out by the coalition.

'These attacks on our forces will continue'

Dennis Ross, a former US ambassador, now at the Washington Institute for Near East Policy think tank, cast doubt on the Pentagon's ability to deter Kataeb Hezbollah.

"Regrettably, these attacks on our forces will continue as Iran has no problem fighting to the last of the Shia militias and believe they can force us out of Iraq," he said on Twitter.

Iran retaliated for the US drone strike that killed Soleimani by launching missiles from its territory at an Iraq base hosting US troops - leaving more than 100 US forces with brain injuries.

In Wednesday's attack, in addition to the three killed, 14 coalition personnel were wounded, including American, British, Polish and other nationals. Private contractors were among the wounded.

US Army General Mark Milley, chairman of the Joint Chiefs of Staff, told Pentagon reporters that five of the wounded were categorised as "urgent," suggesting serious injuries that could require rapid medical evacuation.

The UK named its killed service member as Lance Corporal Brodie Gillon, a medic. The US has not yet identified its service members who died.

In a sign of concern that tensions between the US and Iran could be heading towards open conflict, the Democratic-led US House of Representatives had passed legislation on Wednesday aimed at limiting Trump's ability to wage war against Iran.

The Republican president has launched a maximum-pressure campaign of renewed sanctions and near-constant rhetoric against Iran, after pulling the US out of the international nuclear deal reached during the administration of his predecessor, the Democratic Barack Obama.

Tensions between Washington and Tehran have mostly played out on Iraqi soil in recent months.

Iran-backed paramilitary groups have regularly been shelling bases in Iraq that host US forces and the area around the US embassy in Baghdad.