'We are crazy enough': Former Turkish commando plans to take on Erdogan

Colonel Ali Turksen says that he, the party he has joined and its leader Meral Aksener will finally break the AKP's hold on power in Turkey Not many people can take credit for almost starting a war, but Colonel Ali Turksen is one of those few.

In 1996, he led a commando team to the disputed Aegean island of Kardak where they hoisted a Turkish flag. The result was days of military build-up between Greece and Turkey, with war only averted after the intervention of foreign mediators. Nevertheless, Turksen and the other 11 commandos were welcomed back to Turkey as heroes.

For someone to try to take power from the AKP today, they must be very crazy people

These days, however, the retired Turksen sees the main threat to his country coming not from Greece, but from his own government. After having spent most of his life in the military and eschewing politics, Turksen decided to throw his lot in with the Iyi Party, founded last month by dissident nationalist politician Meral Aksener.

"I never imagined that I would join the parliament or the Turkish system, but after the last election I thought I have to do something for my country," he told Middle East Eye, speaking from his home in Istanbul.

"Meral Aksener one day offered me to join her party and I said, 'OK I already decided to join your party.'"

For many across the political spectrum in Turkey, Iyi Party - which roughly translates to "the good party" and has a logo of a bright yellow sun -  represents the latest hope for chipping away at the ruling Justice and Development party's (AKP) grip on power. Aksener is seen as one of the few politicians in the country whose popularity genuinely threatens that of President Recep Tayyip Erdogan.

Despite this, the party faces an uphill struggle in a country where so much political and media power is under government control.

"I live in Istanbul and I speak every day to a lot of people - even though the media coverage doesn’t support Iyi, a lot of people understand there is a huge expectation for our party," he said. "We will handle this through social media and on the streets and we will make visits all around Turkey.

"For someone to try to take power from the AKP today they must be very crazy people," added Turksen, sardonically.

"We are crazy enough because we are really fed up with the last 15 years in power."

Though Aksener broke away from the far-right Nationalist Movement Party (MHP) in 2016, Iyi supporters have been keen to stress that their new project is a "big tent" designed to appeal as much to secular nationalists as religious conservatives. The primary thing that unites them, they claim, is a desire to see Erdogan and the AKP ousted from power.

Translation: "We will be GOOD! Our party building is opening..."

Despite being hailed for his operations against Greece, Turksen fell victim to the shadowy political wranglings surrounding military involvement in government affairs in the 2000s. He was arrested in 2010 as part of the investigations into the Ergenekon coup plot, an alleged plan by ultra-nationalist secularists to overthrow the AKP government.

The wave of arrests has since been seen as an attempt by the AKP - and their then ally Fethullah Gulen - to undermine the military's longstanding power over civilian politics.

Sentenced to 16 years in jail for planning the assassination of major military figures and illegally storing arms, Turksen eventually served three and a half years in jail, being released in 2014.

Although many of those imprisoned have since been acquitted - after the evidence in the cases was called into question - Turksen still has little love for his erstwhile persecutors, not least the Gulenist movement.

In particular, he was enraged by recent attempts by pro-government media in Turkey to paint Aksener as a closet Gulenist, knowing full well that the AKP had allied with them to put him in jail.

"If you follow the last 15 years in Turkey, a lot of people from the AKP supported Gulen and today they forgot everything that they said only a couple of years ago about Gulen," he pointed out, adding that the attacks on Aksener were "false accusations".

"The government also supported the Gulenist schools around the world and they forced the ambassador to support them. Today they forgot everything."

The AKP's undermining of the military also rankles with Turksen.

"As I understand from my 33 years in the military, officers shouldn’t support any political idea. Their duty is just to protect their country. Today they try and collect AKP supporters in the military."

'How happy is the one who calls himself a Turk'

The launch of the Iyi Party has not only concerned government supporters: despite its claims to the contrary, left-wing activists and minority groups have warned that the party's position on many issues falls in line with Turkish ultra-nationalists.

Aksener and her supporters are regularly photographed making the "wolf sign" gesture, associated with Ulku Ocaklari (commonly known as Grey Wolves) and other far-right Turkish organisations.

Its launch programme lauds the "Turkish nation" and takes a hard line against Greece. And although it made positive comments on religious minorities in Turkey, the major restless minority - the Kurds - were not even mentioned.

Turksen said that although his party were not taking a "rightist" approach on the Kurds, the primary problem in the southeast, which has seen thousands killed in violence in recent years, was the "terrorism" of the Kurdistan Workers Party (PKK).

"We believe that one of the main phrases from Ataturk is 'how happy is the one who calls himself a Turk'", he explained.

He added that he saw the concept in terms of citizenship rather than ethnicity.

"We don’t think there is a conflict between Turks and Kurds but there is a terrorist problem in the southeast region of Turkey," he continued. "We have to clear the PKK activities and all the supporters of the PKK."

"Then we can all live together. But under the idea of 'how happy is the one who calls himself a Turk'."

The AKP and Erdogan's seemingly unassailable popularity has apparently begun to slip. A referendum this past April to change the Turkish constitution and create a strengthened presidency - widely seen as a poll on Erdogan's political leadership - barely passed, with the three biggest cities all voting against.

"They are going down and down and down. I think there is just a couple of inches to hit the bottom," said Turksen, referring to the AKP. "If they get control after 2019, I think there will be more conflict in the population and I think one day the people will be fed up and I don’t want to imagine what will happen next.

"I believe in the military saying that we have just enough bullets to hit the target - and this is the last bullet." 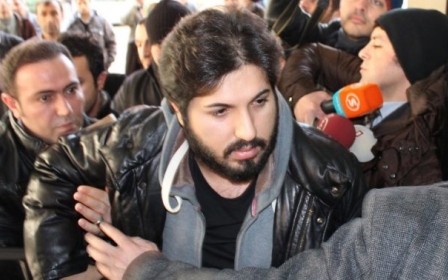 Diplomacy
A gold trader, a president and an Iranian conspiracy: The US case shaking Turkey