Why did Sudanese general Burhan agree to meet with Netanyahu?

The secret meeting has caused controversy in Sudan over normalisation with Israel - but was its real diplomatic message aimed at the US? 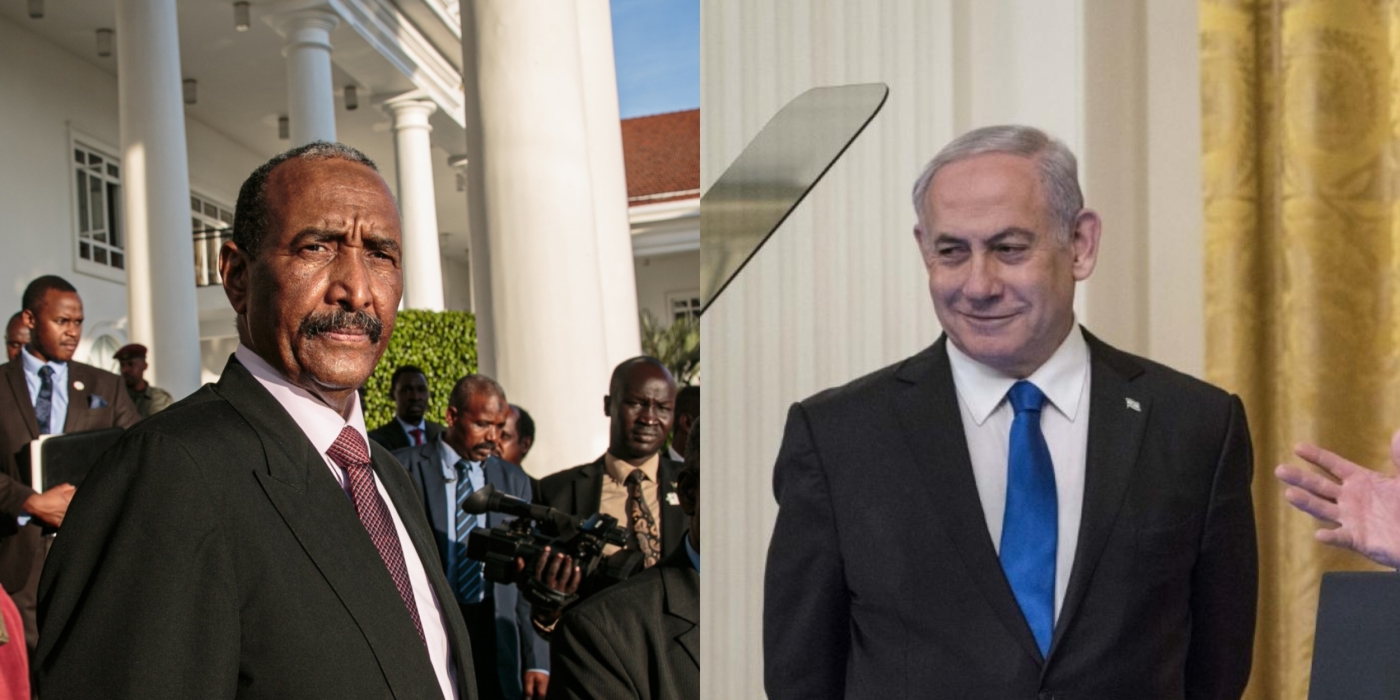 A secret meeting between Sudanese leader General Abdel Fattah al-Burhan and Israeli Prime Minister Benjamin Netanyahu on Monday has sparked a wide range of reactions, both internationally and within Sudan. The high-level meeting is considered to be the first of its kind for the two countries - as Sudan has abstained from any official diplomatic ties with Israel since obtaining its independence in 1956, despite many under-the-table meetings over the decades.

The encounter, which was welcomed by the US State Department, came on the heels of international and regional controversy over US President Donald Trump’s so-called “deal of the century” plan for Israel and Palestine, which was strongly rejected by the Palestinian leadership and the Arab League.

But as Sudan struggles to move forward nearly a year after an uprising that toppled the 30-year regime of Omar al-Bashir, was the meeting more about practical economic considerations than a seismic diplomatic shift?

While the Israeli government and Israeli media widely circulated the news of the Burhan-Netanyahu meeting in Uganda, Sudanese outlets have been quiet about the news and the reasons behind such a radical change in Khartoum’s long-standing foreign policy.

The Sovereign Council of Sudan - a joint civilian-military cabinet in place since September officially - said it was not notified of the meeting ahead of time, minister of information and government spokesman Faisal Mohamed Saleh said on Monday.

"We have received information through media outlets saying that the chief of the Sovereign Council, General Abdel Fattah al-Burhan, has met the Israeli prime minister in Entebbe, Uganda," the statement sent to Middle East Eye explained.

"The council of ministers hasn't been notified or consulted over such a meeting, so we are waiting for clarification after the return of the chief of the Sovereign Council," the minister noted.

Saleh’s statement came after hours of silence by the interim government, raising questions about the relations within the council between its civilian and military members, who had stood in stark opposition to one another during the uprising that led to the downfall of Omar Bashir in April last year.

A senior Sudanese military officer disclosed to local media that the meeting had been facilitated by the United Arab Emirates, with Saudi Arabia and Egypt having knowledge of the plan.

Palestinian leaders have condemned the meeting, calling it a “stab in the back”.

Palestine Liberation Organisation (PLO) Secretary-General Saeb Erekat urged the pro-uprising Forces of Freedom and Change (FFC) coalition within the Sovereign Council to reject both Trump’s Israeli-Palestinian plan and normalisation between Sudan and Israel.

In a statement, US State Department spokesperson Morgan Ortagus thanked Burhan “for his leadership in normalizing ties with Israel,” adding that the Sudanese general and US Secretary of State Mike Pompeo had agreed during a call on Sunday to work towards a stronger bilateral relationship between Washington and Khartoum.

The statement further noted that Pompeo had invited Burhan to Washington, DC to meet with him later in the year.

The Sovereign Council on Sunday confirmed that the phone call between Burhan and Pompeo took place.

It remains unclear whether the promise of warming US-Sudanese relations - as Khartoum remains on a US blacklist and subjected to crippling international sanctions - was conditioned on normalising relations with Israel.

A staunch Israel supporter, Trump and his administration have not hidden their desire to have Arab and Middle Eastern states officially open diplomatic ties with Israel and recognise the country.

Atlantic Council senior fellow and former US diplomat Cameron Hudson told MEE he believed the Trump administration was behind the meeting.

“Pompeo made the call to Burhan at the request of the Israelis,” he alleged. “I believe improving relations with any and all nations is in Sudan's interests and is in line with the government's policy of a balanced foreign policy.

“Improving relations with Israel specifically marks an important break with past pro-Iranian, pro-Islamist policies of the Bashir regime,” Hudson added. “This will be very welcome in the West.”

In an official statement on Tuesday, Burhan said his meeting with Netanyahu had been to maintain the "security and national interests" of Sudan.

Meanwhile, the news has caused an internal split within Sudan, between those who consider it a betrayal of long-held values and those who argue such a decision can serve the interests of the Sudanese people.

Palestinians living in Sudan have also reacted with shock.

Abu Eyad, a 50-year-old Palestinian restaurant owner in Khartoum, told MEE that Sudanese recognition of Israel would negatively affect the relationship between Palestine and Sudan.

“We enjoy very good ties with the Sudanese people and we still do believe that the majority of the Sudanese don’t support this step,” he told MEE.

The FFC members of the Sovereign Council denounced the meeting as "unconstitutional".

Muslim cleric and head of the Current of Sharia Supporters bloc Abdel Hay Youssef told local media the meeting was “treason” to Islam.

“The Burhan government is only a transitional government that came to power through a military coup and has no right to make a decision on a such serious matter without consulting the Sudanese people,” Youssef said.

On social media, Sudanese have been deeply divided, including among supporters of the transitional government.

Some argue that the move can help Sudan to overcome its crises by normalising relations with the United States and getting Washington to remove Sudan from its list of state sponsors of terrorism.

However, others believe that the decision is inconsistent with the values of the Sudanese uprising, which called for freedom, justice and peace, and called for demonstrations on Tuesday.

Despite the uproar, this is not the first time a Sudanese political figure has engaged with Israel, despite Sudan’s longstanding policy of boycotting Tel Aviv. The first leaked meetings between the Sudanese and Israeli officials was in 1953, when Alsadig Almahdi - then the leader of the National Umma Party who would become prime minister of Sudan after independence - met some Israeli officials in London in failed talks to establish ties.

Yet in September 1967, Sudan would host Arab states in the wake of the Six-Day War that would lead to the Khartoum Resolutions otherwise known as “the three nos” calling for the boycott of Israel by all Arab countries.

In 1983, Sudanese President Gaafar Nimeiri met with Israeli officials and agreed to transport Ethiopian Jews who had been stranded in Sudan to Israel in what would be known as Operation Moses in 1984.

During the 30 years of Bashir’s reign, relations were more hostile, as the Sudanese government was accused of helping and hosting Palestinian resistance members, as well as assisting in the transfer of weapons to Hamas fighters in the Gaza Strip.

The close ties between Bashir and Iran worried Israel and led to repeated Israeli air force bombardments on Sudanese territory, including an attack on an Iranian military factory in Khartoum in 2012.

However, sources told MEE that Sudan’s then-spy chief Salah Gosh had met with his Israeli counterpart, Mossad director Yossi Cohen, in Munich in March 2019, one month before Bashir’s ouster, to discuss a possible succession plan. 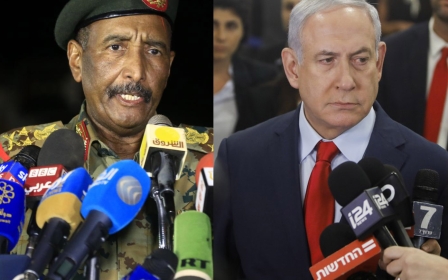 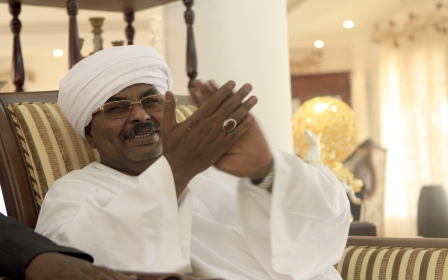