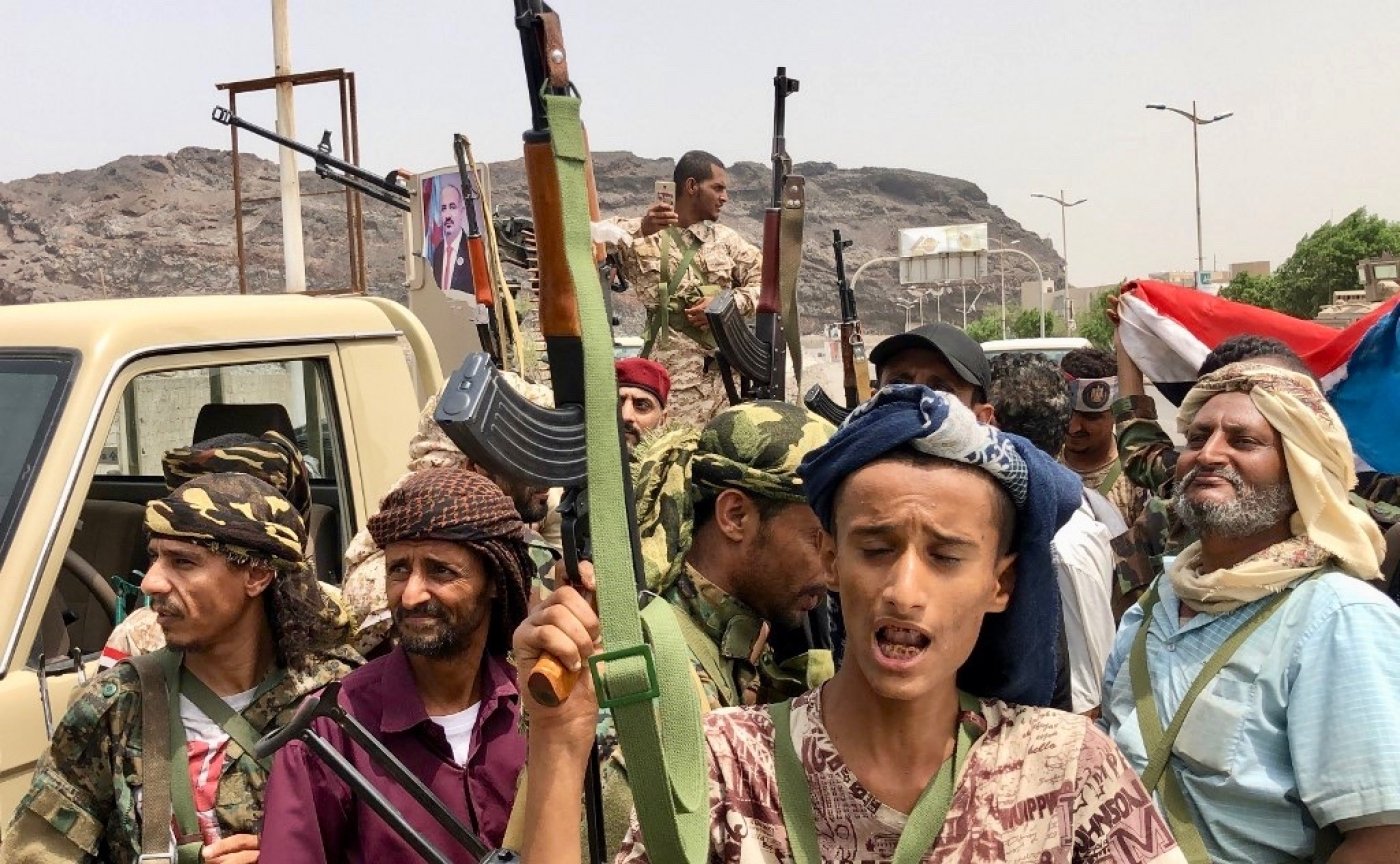 The deal calls for a government reshuffle to include the STC, which seeks self-rule in the south (AFP)
By
MEE and agencies

Yemen's government and southern separatists are expected on Thursday to announce a deal to end a power struggle in the southern port of Aden that helped to fracture the Saudi-led coalition battling Houthi rebels, officials have said.

The UAE-backed separatist Southern Transition Council (STC) is nominally allied to the Saudi-backed government of President Abd-Rabbu Mansour Hadi, but the two sides fell out in August, with the separatists seizing control of Aden.

Saudi Arabia has hosted indirect talks between them in an attempt to rebuild the coalition fighting against the Houthis, who expelled Hadi's government from the capital Sanaa five years ago. The Houthis have repeatedly launched missiles and drone strikes against Saudi cities during the conflict and Riyadh has been trying to refocus the coalition on fighting the rebels on its southern border.

Fighting between pro-Hadi forces and the separatists had opened a new front in the multi-faceted war and complicated United Nations peace efforts.

Two officials in Hadi's government told the Reuters news agency that the pact to end the Aden standoff would be signed in Riyadh on Thursday.

STC leader Aidarous al-Zubaidi, who has been involved in the month-long talks in the Red Sea city of Jeddah, headed to Riyadh on Wednesday, according to a post on his Twitter account.

The deal calls for a government reshuffle to include the STC, which seeks self-rule in the south, and the restructuring of armed forces under Saudi supervision, they said.

The move seemingly paved the way for ending the crisis that had exposed differences between Riyadh and Abu Dhabi over how to proceed in the wider war that has been in military stalemate for years.

The UAE scaled down its presence in Yemen in June as Western pressure mounted to end the conflict that has pushed millions to the brink of famine.

But Abu Dhabi retains influence through thousands of Yemeni troops it armed and trained.

Yemen's government has asked the UAE to stop supporting the STC but Abu Dhabi has criticised Hadi's administration as ineffective and distrusts Islamists with whom he is allied.

Resolving the power struggle in the south and easing Houthi-Saudi tensions would aid UN efforts to restart peace talks to end the war that has killed tens of thousands.

The Houthis last month offered to stop missile and drone attacks on Saudi Arabia if the coalition ended air strikes on Yemen. Riyadh has said it views the offer "positively".

The rebels, who control Sanaa and most big urban centres, extended the offer after claiming responsibility for a 14 September assault on Saudi oil processing facilities.

Riyadh rejected the Houthi claim of responsibility and blames Iran for the attacks, a charge Tehran rejects.

The Houthis deny being puppets of Iran and say they are fighting a corrupt system, pointing to the standoff in Aden as proof that Hadi is unfit to rule.