Yemen inches towards peace - but what about the Islamic State group? The burned out car of Jaafar Saad (AFP)
By
MEE correspondent

TAIZ, Yemen - It was a breakthrough that both sides in the Yemen war had been waiting for - an offer of peace talks based on a general ceasefire, a condition the Houthis had demanded and something which, until last week, President Abd Rabbuh Mansour Hadi had dismissed.

But with that ceasefire now agreed, and due to begin on Tuesday morning at 9:00 GMT, according to the Saudi-led coalition, those striving for peace hailed upcoming talks in Switzerland as the best hope to end the bloodshed.

Only no one has told the Islamic State group, whose presence in the south of the country has been felt with a wave of assassinations and attacks in Aden.

In early October the group attacked the Yemeni government at al-Qasr hotel, reportedly killing dozens of officials and troops, and on 6 December murdered Jaafar Saad, who had been the city's governor for only two months, in a car bomb attack.

Many in the southern city now ask: how can Yemen have peace if the spectre of IS hangs over the country?

The rebel forces have yet to say if they will abide by the ceasefire agreement.

The attacks have sent shockwaves through the Saudi-backed Hadi government, with Hadi appointing members of the Southern Resistance to lead Aden's defence. Hadi forces have also moved from fighting in Sanaa and Taiz towards Aden in response to the growing IS campaign.

Galal al-Sobaihi, a commander in the Southern Resistance in Aden's al-Mansoura district, told Middle East Eye that Aden was his main priority, but claimed that the Houthis were in fact the force behind the IS campaigns.

"The war in Aden has not finished, as the ousted president Ali Abdullah Saleh and the Houthi rebels still create chaos under the name of IS fighters," he said.

The city's former head of security, Mohammed Mosaed, supported Sobaihi's view: "There are no IS in Aden and the militias who create chaos are supporters of Saleh and the Houthis."

Al-Qaeda in the Arabian Peninsula are also suspected of aligning with IS in Aden to strike at the Hadi government. It is this seemingly intractable situation on the ground that has spread fears that whatever is agreed in Switzerland this week will have little effect in the city.

Mohammed Al-Hassani, a political analyst and the former managing editor of al-Tagheer news website, told MEE that IS must be dealt with if there is to be a lasting peace.

"We did not hear about the AQAP or IS fighters in Aden before the war began, and they took advantage to enter the city," he said.

He said that Hadi's supporters had recently stopped their advances in Taiz, possibly to facilitate the ceasefire - but that they had a more pressing mission to confront IS in Aden. IS, he added, was the common enemy for Houthis and pro-government forces.

To add to the complex situation facing Yemen, the Southern Resistance, while fighting in support of Hadi in Taiz and Aden, have the ultimate aim of splitting southern Yemen from the rest of the country.

For the residents of Aden, however, one warring faction is as bad as another.

Abdul Mazen, a resident in Aden's Crater district, told MEE that he used to see the AQAP fighters in his visits to al-Tawahi area, confirmed by al-Qaeda slogans on their rifles and vehicles.

However, recent deployments by Hadi-aligned forces had driven them out, or at the very least underground. "For the last three days I have not seen the AQAP fighters, as the Southern Resistance spread everywhere in the city," he said.

"We need Aden to return to peace, we do not want to see the armed men spread in the city whether they are from the Southern Resistance or from IS and AQAP." 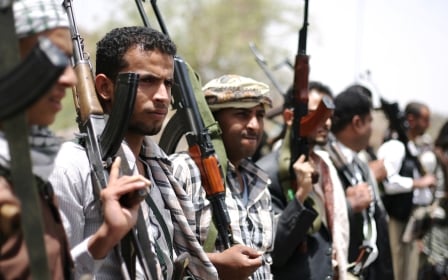