Two weeks after the United Nations revealed an engine room leak nearly caused an economic and environmental catastrophe, the Safer has yet to be inspected Two weeks after the United Nations admitted a leak in a rusting oil tanker's engine room nearly caused an environmental and economic catastrophe off Yemen's Red Sea coast, a UN team has yet to access the ship, with political infighting blamed for the delay.

Every day that passes adds to the risk that seawater could overwhelm the Safer or a chemical explosion may hit the vessel, causing it to spill the 1.1m barrels of crude it holds into the Red Sea.

Anchored about 60km from the Yemeni port city of Hodeidah, the 44-year-old Safer has since 1988 acted as a floating storage and offloading (FSO) terminal to receive Yemeni export crude and load it onto vessels.

But since the Houthi movement seized Hodeidah and its environs in 2015, the ship has received no maintenance, transforming it into a looming threat.

Yemeni and international officials and environmental activists have regularly warned of the danger for Yemen and the wider region.

An engine room leak on 27 May served as a wake-up call, with the UN saying a temporary fix had succeeded in containing the leak, but was unlikely to hold for long. 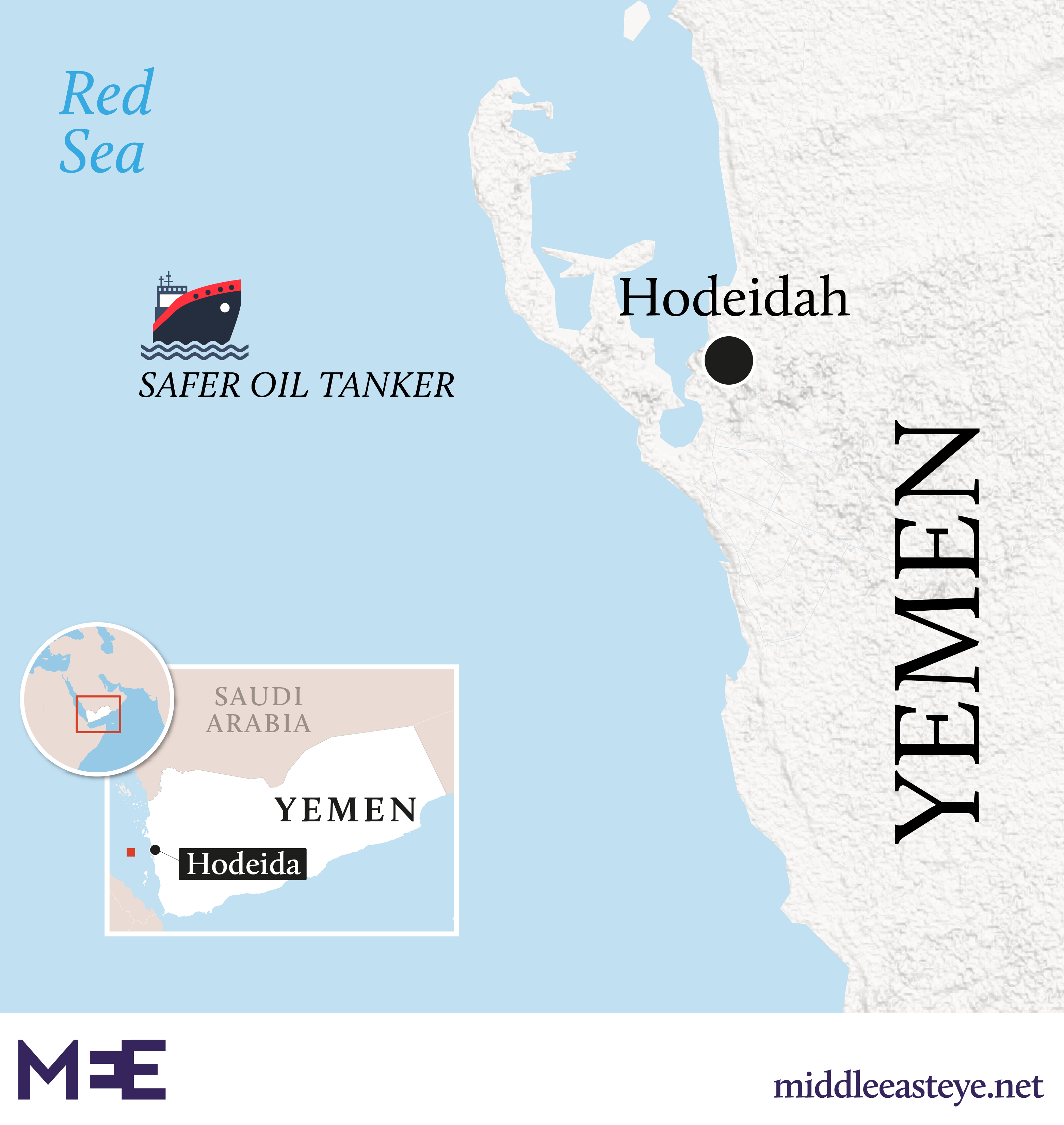 Apart from the environmental damage caused by an oil spill, which could be potentially worse than the Exxon Valdez oil disaster in 1989 in Alaska, millions of jobs and livelihoods could be lost.

Hodeidah's port is the artery through which some 70 percent of Yemen's imports pass.

In a country where 22 million people rely on humanitarian assistance, an oil spill decommissioning its facilities would have far-reaching and terrible consequences.

Moreover, millions of Yemeni households along coastal areas rely on fishing as their livelihood.

Yet UN-backed technical experts are yet to board the Safer and begin the work needed to avert disaster, with Yemen's rival administrations trading blame.

On 14 August, a statement from the office of UN Secretary-General Antonio Guterres urged Yemeni authorities to allow experts access as soon as possible.

"In 2019, both Yemeni parties approved the deployment of a UN technical team to assess the damage and conduct any feasible immediate repairs," it said.

"The de facto authorities granted the United Nations the travel authorisations to come to Hodeidah but did not provide the final clearances necessary to access the tanker by sea.

"They further raised several demands (including some unrelated to Safer) that eventually led to the cancellation of the mission. Since then, the United Nations has repeatedly attempted to obtain the required authorisations to deploy the expert team."

However, the Sanaa-based Houthi Oil Minister Ahmed Dares had four days earlier insisted that his administration was the first to alert the UN to the potential danger and ask for assistance.

Corrosion & leakage of the Yemeni oil tanker, Safer, warns of an explosion that could cause a disaster if it does not carry out urgent maintenance.
It threatens to cause the worst oil spill in the world and environmental damage that will last for decades.#Yemen. pic.twitter.com/Ph2QgoM6oc

A source in the Sanaa information ministry told Middle East Eye that required authorisation had been issued but that the maintenance team was nowhere to be seen. He blamed the Saudi-led coalition backing President Abd Rabbuh Mansur Hadi for spreading disinformation.

"The aggression [Saudi-led coalition] tries to deceive the world with fake news that Ansar Allah [the Houthis] prevent the UN from maintenance," the source said. "The purpose of this is that the aggression wants to blame us if a disaster happens in the Red Sea."

According to the source, the Houthi oil ministry welcomed the UN's intervention and was working hard to provide the United Nations with all required approvals.

"If something happens in the Red Sea, millions will be affected, including Ansar Allah, and Ansar Allah won't get any advantage from the Safer's explosion or an oil spill, so it is irrational to say they are against the maintenance."

MEE has asked the UN for comment but received no response by the time of publication.

For the fishermen of Hodeidah, Hajjah and Taiz provinces, trying to eke out a living is tough enough without the threat that their source of income could be wiped out completely.

"Fishing isn't good work like before the war, as we have been forced to fish in specific areas, with others considered conflict zones," Ahmed Hamanah, a Hodeidah fisherman in his 40s, told MEE.

"Also the sea isn't as safe as before the war, and many fishermen have been killed by air strikes. But we have no other choice, and we are risking our lives to fish to provide our families with basic commodities."

Hamanah, who belongs to a family of fishermen, said he had heard about the danger posed by the Safer and its possible effects on the marine environment.

'If the oil spills from the tanker, fish will die and fishermen will lose all their work as there won't be fish in the sea and we will lose our coral reefs'

"If the oil spills from the tanker, fish will die and fishermen will lose all their work, as there won't be fish in the sea and we will lose our coral reefs," he said, noting that they had invested a lot of money into cultivating the coral around which fish live.

According to a survey by Holm Akhdar Initiative, which works on environmental issues, a Safer oil spill could destroy the livelihoods of 126,000 Yemeni fishermen.

Meanwhile, the survey said, the biodiversity and ports of 115 Yemeni islands would be struck. Yemen's Red Sea waters are home to almost 1,000 species of fish and 300 types of of coral.

Though Hodeidah's fishermen are well aware of the danger lurking off the coast, other residents of the city are less informed.

Bassam Darwish, a vegetable seller in his 40s, said he has never heard of the Safer or its oil. He said he already had plenty to worry about.

"We are fighting to provide for our families, and it has become a challenge to provide them with basic things," Darwish told MEE.

"In Yemen everything is possible. Six years ago we didn't imagine that warplanes would attack our city, but that happened, and today we hear about a danger coming from an oil tanker and a new disaster may happen."

Darwish didn't want to get drawn into the blame game surrounding the Safer's decay, preferring instead to highlight the suffering of Hodeidah's residents.

"I don't want to talk about politics as I'm an illiterate man struggling to eke out a decent living for my family. But what I can say is that war changed the lives of most residents in this city for the worse," he said.

"Many people fled their homes, others were killed or wounded and the majority lost their source of income, either in the sea or outside it. We can't afford any more disasters."

Abdullah Nazeih, a petroleum engineer with 20 years' experience, told MEE that the Safer tanker issue appeared to have become politicised, and stressed that it should not be.

"The UN should intervene to do the assessment and maintenance by force, as an oil spill from the Safer may lead to a catastrophe in the region," Nazeih said.

According to Nazeih, there were no Yemeni engineers qualified to do the maintenance and foreigners used to do such work even before 2015.

'The UN should intervene to do the assessment and maintenance by force, as an oil spill from the Safer may lead to a catastrophe in the region'

"I believe that the authorities in Sanaa are aware of the danger of this tanker, as they have access to it and they know that the Safer can't remain without maintenance after the new year, so I hope the maintenance will take place on time," he said.

Nazeih suggested that Yemen's neighbours around the Red Sea should also press for a UN intervention, as the danger is looming for them too.

"The danger depends on the quantity of the spilled crude and it can arrive at neighbouring countries," he said.

The 1.1m barrels of oil could be worth as much as $60m, and Nazeih suspects this may lie behind the politicisation.

"I think that the dispute is over the crude oil, but the UN can solve this disagreement between the warring parties," he said. Inside Yemen
'Each photo a story': The Yemeni archivist bringing his country's history to life