Yemen's Houthi rebels have threatened further escalation after two ballistic missiles launched by the group were shot down over Abu Dhabi on Monday morning.

The attack, the second in a week targeting the United Arab Emirates, was aimed at the al-Dhafra air base as well as "vital and important" locations in the Dubai area, according to a statement by the group. The US military also intervened to aid the UAE in thwarting the attacks, US and Emirati officials told The New York Times.

Tensions have risen following a Saudi-led coalition strike on a prison in Saada, a Houthi stronghold, on Friday in which at least 100 people were killed, one of the deadliest single attacks in the ongoing conflict.

A second attack on Hodeidah shut off the country's internet. The internet connection in Yemen remains largely out.

In response to the "massacre" on Friday, the Houthis told foreign companies to begin pulling out of the UAE as they were "investing in an unsafe state as long as the rulers of this state continue to attack our country".

"We are ready to expand the operation during the next phase and confront escalation with escalation," Houthi spokesperson Yahya Saree said in a televised statement.

Emirati officials said they had intercepted two missiles over Abu Dhabi, spraying debris across the city, but did not report any attack on Dubai.

The UAE is part of the Saudi-led coalition that has, since 2015, been fighting the Houthis in Yemen.

The Houthis have also regularly targeted Saudi Arabia with drones and missiles in recent years.

UAE-backed pro-Yemeni government forces have scored major successes in recent weeks, pushing the Houthis from the oil-rich southeastern province of Shabwah and making headway into Marib to the north.

Those advances prompted the Houthis to begin targeting Abu Dhabi directly, and since the attack on 17 January on the emirate's airport and oil facilities, the Saudi-led coalition has pummelled Houthi-held areas of Yemen.

It has also declared Yemen the "world's worst humanitarian crisis," as a Saudi-led economic blockade on Houthi-controlled areas and air strikes have hampered access to health care and increased pressure on the few facilities that are still functioning. 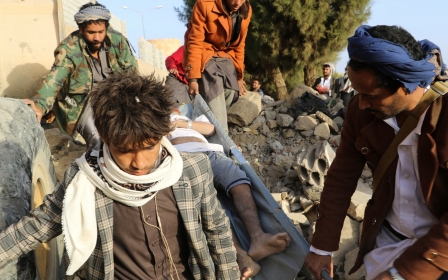