Amid a loss of basic services, Yemenis have had to swap houses for tents, gas for firewood and jobs for aid 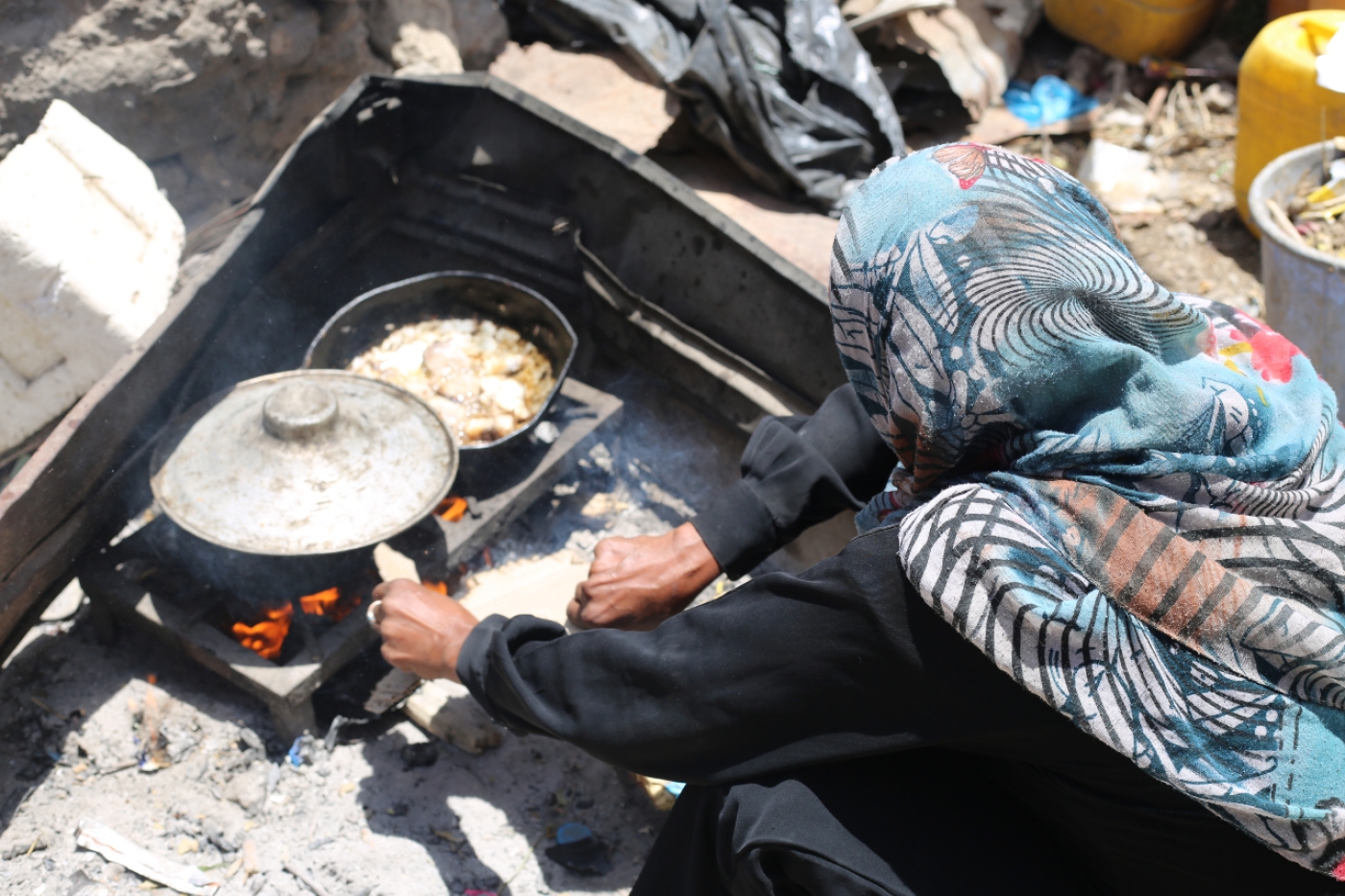 Nujood Salem, a mother of four children, has been forced to use firewood instead of gas to cook her food (All photos by Khalid Al-Banna/MEE)
By
MEE correspondent
in
Taiz, Yemen

As Yemen marks the sixth anniversary of its civil war, fierce fighting is still ongoing on several fronts, either inside the country or on its border with Saudi Arabia.

No peace deal has succeeded in stopping the conflict and every day sees new victims.

With no major developments in the military, political or humanitarian situation, people have had to adapt to a new way of life, often against a backdrop of suffering and struggle.

The six stories below chart just some of the examples of how life has changed for ordinary Yemenis.

Old cars instead of buses and taxis

People used to move both inside and between provinces by using mini buses, buses or taxis, but this is now impossible in many provinces as the fighting has blocked main roads and only mountainous routes are available.

Hamed Ghalib, 23, a resident of Taiz city, explains the changes in travel he has been forced to make.

“In 2015, fighting arrived to our neighbourhood in Taiz city so I was displaced to my original village in Ibb province.

"Later in 2016 I returned to Taiz city through a mountainous and dangerous road because I didn’t have work in Ibb but did in Taiz city. 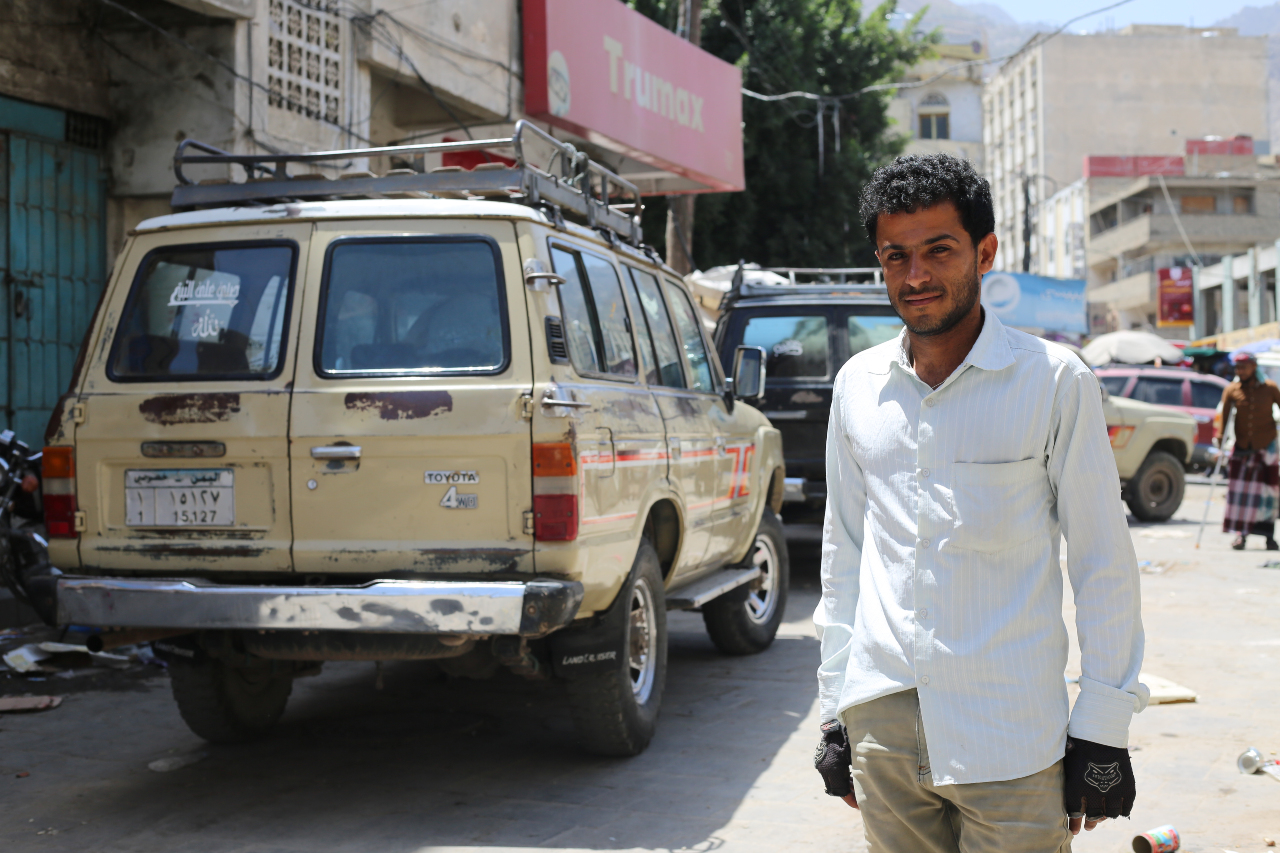 "I thought that would be a temporary road during that period but it became the main road between Taiz city and the northern provinces.

"Before the war I used to travel by good buses from Taiz city to Ibb province, but now they can’t move along that mountainous and narrow road and only old cars can go there, and often cars fall down from those mountains. There were a lot of victims who fell from those roads during the last six years.

'Travelling is a struggle now as it takes around three hours just from Taiz city to Al-Hawban, while it used to take ten minutes by a bus or a taxi'

"Modern and high ground clearance cars can move in those mountains but we can’t afford their costs as they belong to companies and they ask around $300 for the trip. Normal people travel by the old cars.

"I used to visit my family in the village on a monthly basis as travelling was fun and it didn’t cost so much money but now I haven’t visited them in years. It is now dangerous, long and tiring. I don’t visit my family even in Eid.

"Many people in Taiz city can’t visit their families outside the city because of the roads and I’m one of them, so we hope that the war ends and we can travel on the main roads as before.”

Humanitarian aid instead of jobs

Abduljaleel Naji, 45, has been working as a baker for decades but recently, even if he has a job, it's not enough to provide for his family. As a result, along with many other Yemenis, he depends on humanitarian aid.

“Before the war, my income was enough to provide for my family members and I didn’t need any help from anyone, but now there are few chances of work and even when I work, the income is lower than before the war and the prices are going up every day.

"The income isn’t enough to buy the basic commodities for my family and really I’m dependent on organisations to help me with food baskets. If it were not for the aid, my family wouldn't be able to have enough food and other basic services. 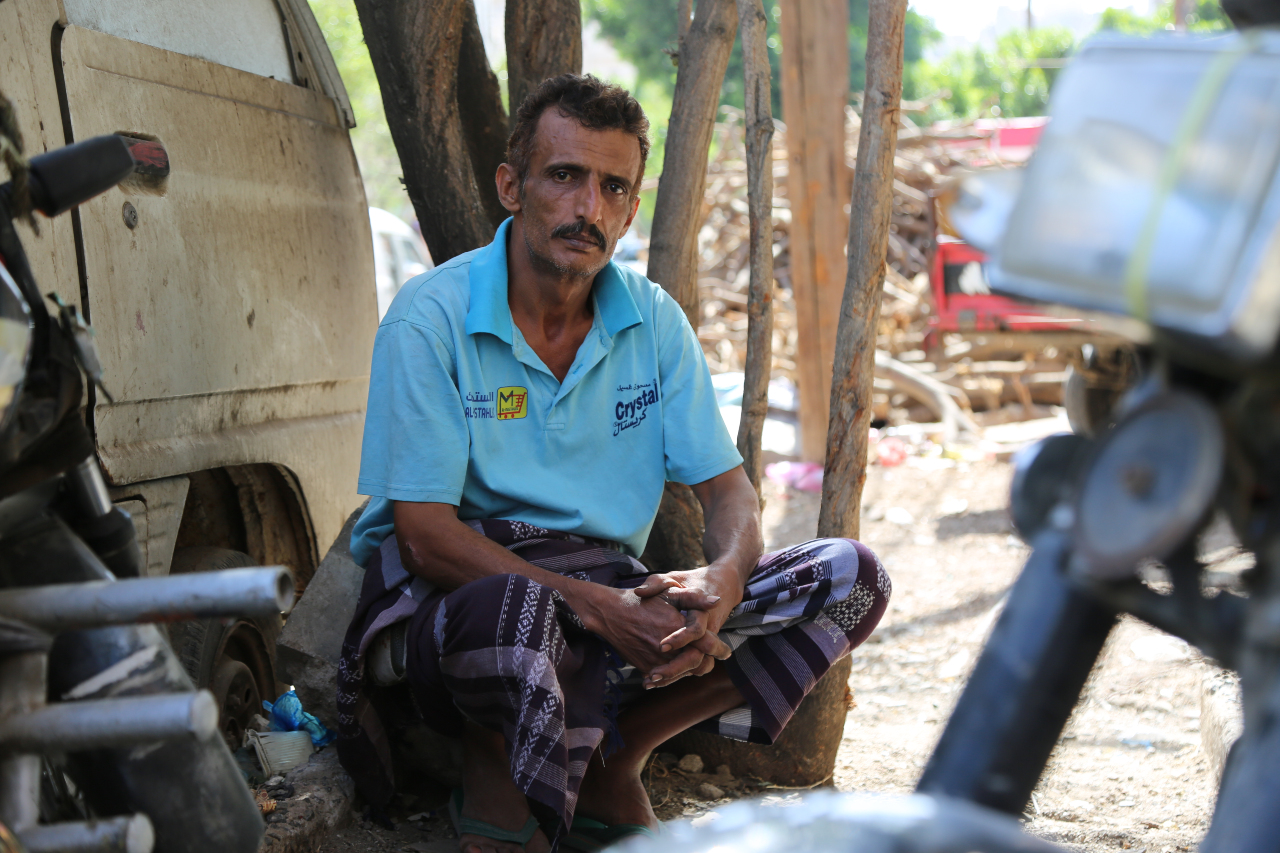 "Before the war, we used to sell ten pieces of bread for 100 Yemeni rial ($0.16) and now the price is only three rial ($0.005). Those who have children, they can’t provide their families even with bread as most of the breadwinners lost their jobs and only rarely have work like me.

"Also the demand for bread decreased after the war as people didn’t have money to buy bread from the market and the organisations help with wheat, so they cook at their houses and don't need to buy bread.

"Organisations play a major role in reducing the suffering of Yemenis and no one can deny this role, but definitely when we work and provide for our families from our incomes it is different from depending on aid.

"Organisations came to help us just to survive and we hope that we can resume our lives like before the war and find good jobs to help our families to find enough food and to build a good future for our children.”

Work instead of school

Majed Mohammed, 16, was just 10-years old when the war broke out in Yemen. He used to go to school but then he was forced to stop and go to work instead.

“I was in the fourth primary class when the war started in Taiz city and I used to go to school together with my four siblings, but then study stopped everywhere and we fled our homes. I was hoping to complete my studies and become an engineer, but since 2015 we have been struggling.

"My father suffered from a psychological trauma and there was no one to provide us with food and other needs so I and my brothers went to work in the market to buy food for our family. It is difficult to see your mother and siblings are hungry and you can’t help. Studying is not more important than food. 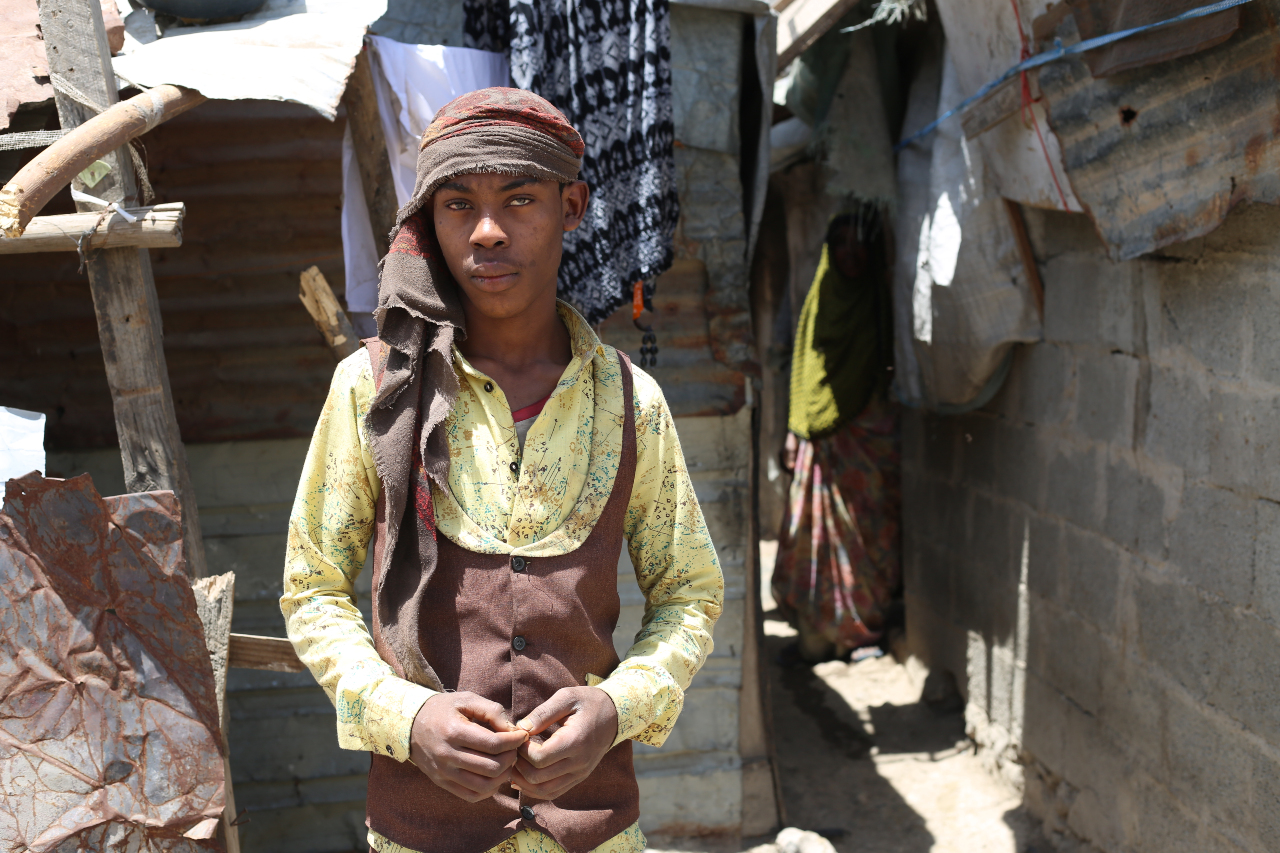 "We work carrying goods in the market, or with builders, or any available work. The work is hard but we have to do it or we won’t find enough food. It wasn’t my dream to do such hard work but I have no choice.

"Nowadays, I see my former classmates go to school in the morning while I go at the same time to the market. I leave my home together with my brothers everyday, early in the morning.

"I think it is difficult to resume studying after six years but we are supporting our younger brother to study and he is the only one in the family that goes to school now.

"No one wants to leave school but it is a fact that many stopped studying and went to work to reduce the suffering of their families.”

Tents instead of homes

Safia Saeed, a mother of four children, used to live inside her home but now she is sheltering in a tent after fleeing the fighting.

“Safety and food became priorities for us and we fled our homes searching for them even if we ended up under plastic sheets that can’t protect us neither from rains nor cold weather.

"Before the war, we enjoyed a good life in our home near to my family, relatives and neighbours who we grew up with, but now we are under tents with new people, most of whom I met for the first time in this camp. 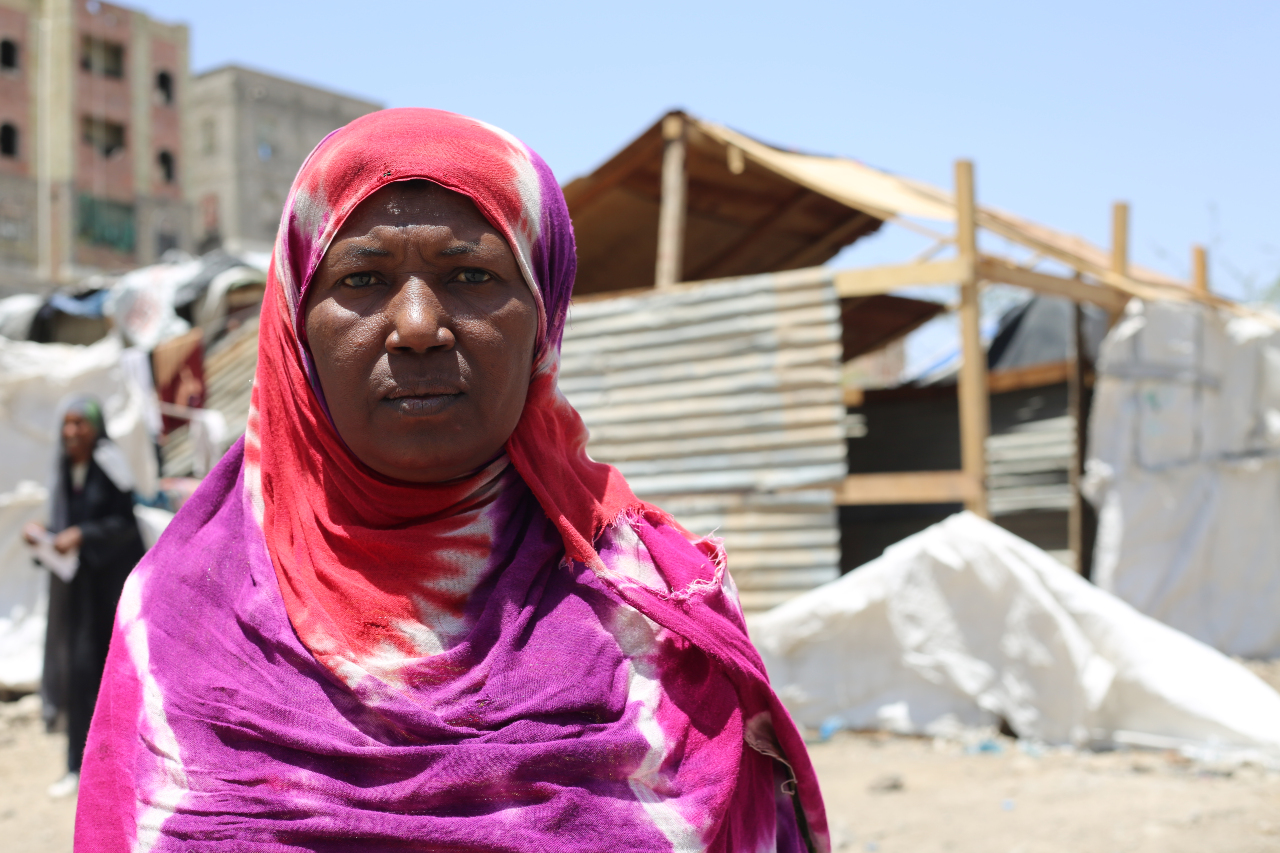 "Our home used to consist of several rooms and now this tent is only one room for the whole family. There is no way to compare this tent with our house but it is the war that forced us to live here.

"This war deprived us of everything, including good shelter, and it changed our life from bad to worse. We didn’t ever think we would live in a tent but we do. In this tent there are no kitchen, no bathrooms, no doors and nothing is good here.

"I’m a sick widow and I’m struggling to help my children and access treatment as I don’t feel well. It is difficult for people like me to rent a house and that they should live in such camps.”

Firewood instead of gas

Nujood Salem, in her 30s, is a mother of four children and used to cook by stove using gas cylinders, but after 2015 gas cylinders became too costly for many Yemenis.

“Before the war, the price of gas cylinders was cheap and we used to have an income but now there is no regular income for the family and the gas cylinders are only available on the black market for high prices reaching around YR8,000 ($13.33).

"We can’t afford the gas price and I don’t remember the last time I cooked with gas. I think it was before 2015, and then we sold the empty cylinder to buy food. Now we only care about getting enough food and always cook it using firewood and cartons we collect from the streets. 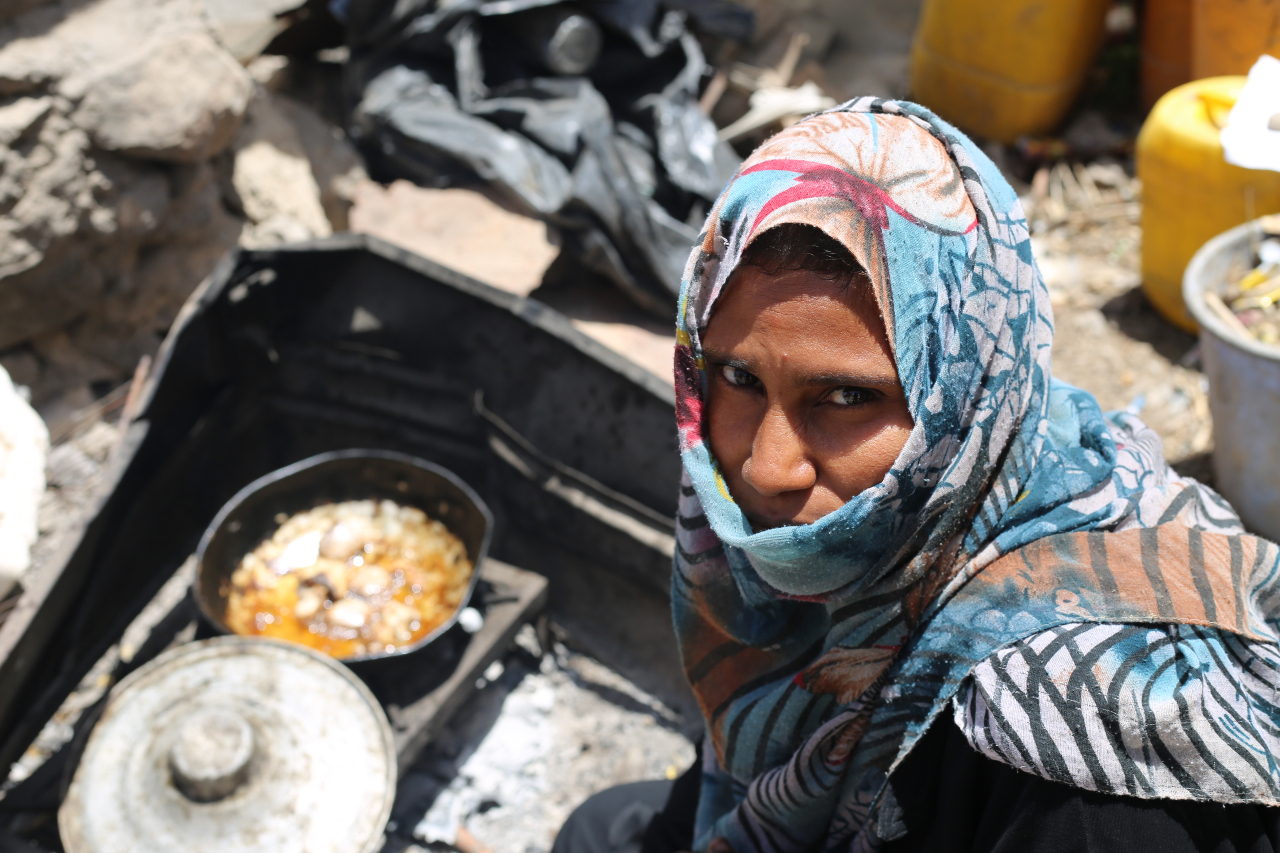 "Even getting firewood is a struggle. We used to gather it from surrounding areas for free, but now we buy it as many people use it for cooking and there is demand. Nothing is free in this country, we have to pay for everything.

"We are displaced people in this camp, we left our homes and came here to live. Life is difficult and we go through a long journey of suffering to have food, starting with getting it from organisations or generous people, then getting clean water, and finally getting firewood to cook it.

"It is now a dream to resume a regular life and use gas cylinders like before. I don’t think this is an achievable dream as every year is worse than the last.”

Solar energy instead of electricity

Before the war, most Yemenis were unaware of solar energy but then it became the main source of lighting. Mujahed Abdullah, a 23-year-old university student who is one of nine siblings, explains the change.

“We hadn’t heard about solar energy before 2015, but in that year the electricity stopped and most provinces were in the dark. During that time, solar energy appeared as a temporary solution and we used it to light our homes, charge phones and other basic things.

"Later, we bought televisions that work through solar energy and step by step solar energy became a permanent alternative for electricity, which we haven’t seen since 2015. It is true there are private generators who sell electricity to people but that costs so much and many people can’t afford that. 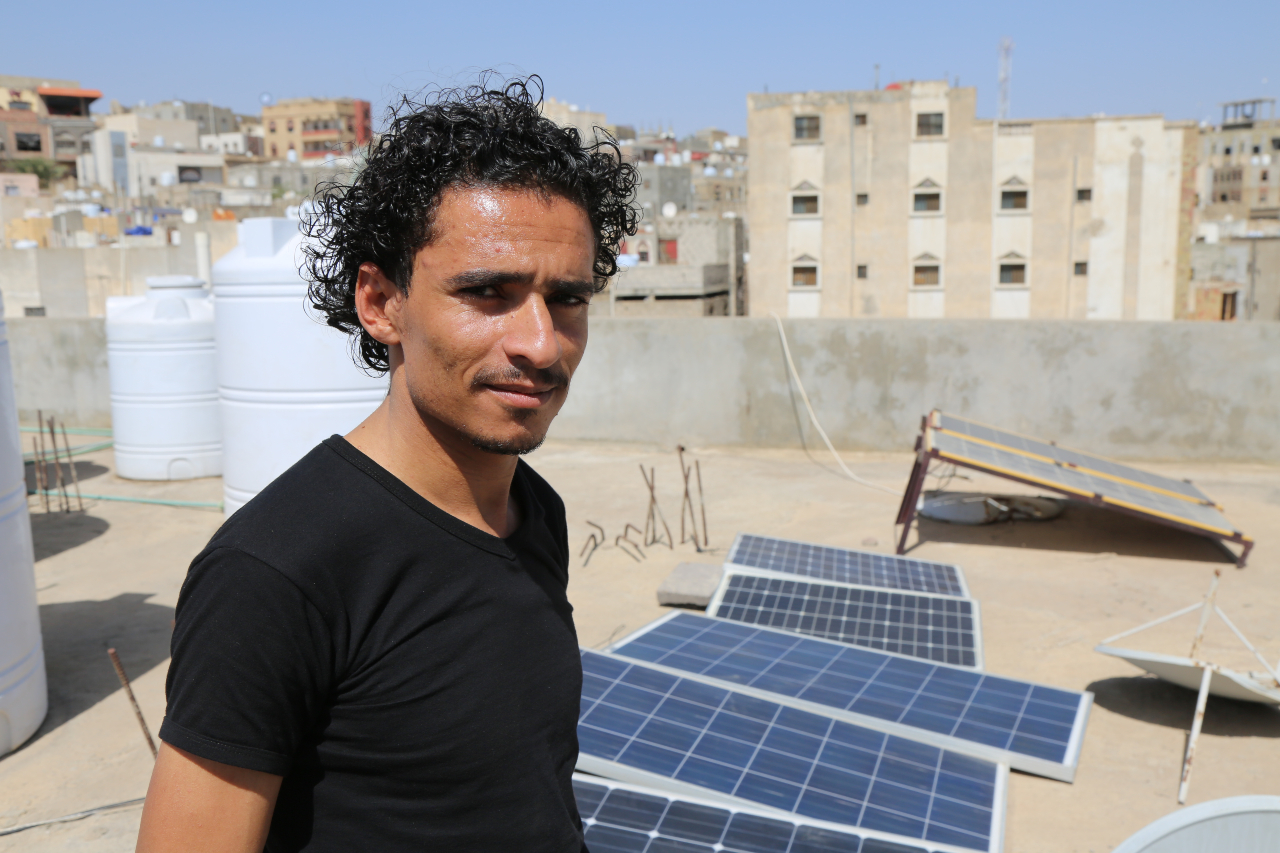 "Before the war, we used to use washing machines, fridges and other electronic machines but now with the solar energy we can’t do that and we mainly only use it for lighting.

"Many people are completely dependent on solar energy nowadays. Solar energy is good, but it shouldn’t be an alternative for electricity. Definitely we miss electricity and hope things can return as before.” 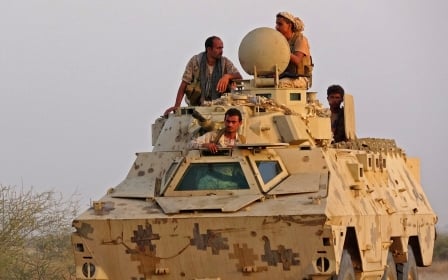