Intissar Kherigi
Tunisia is the only Arab Spring country still committed to democratising, but it needs help. Will the pledges made at Tunisia 2020 do the trick? 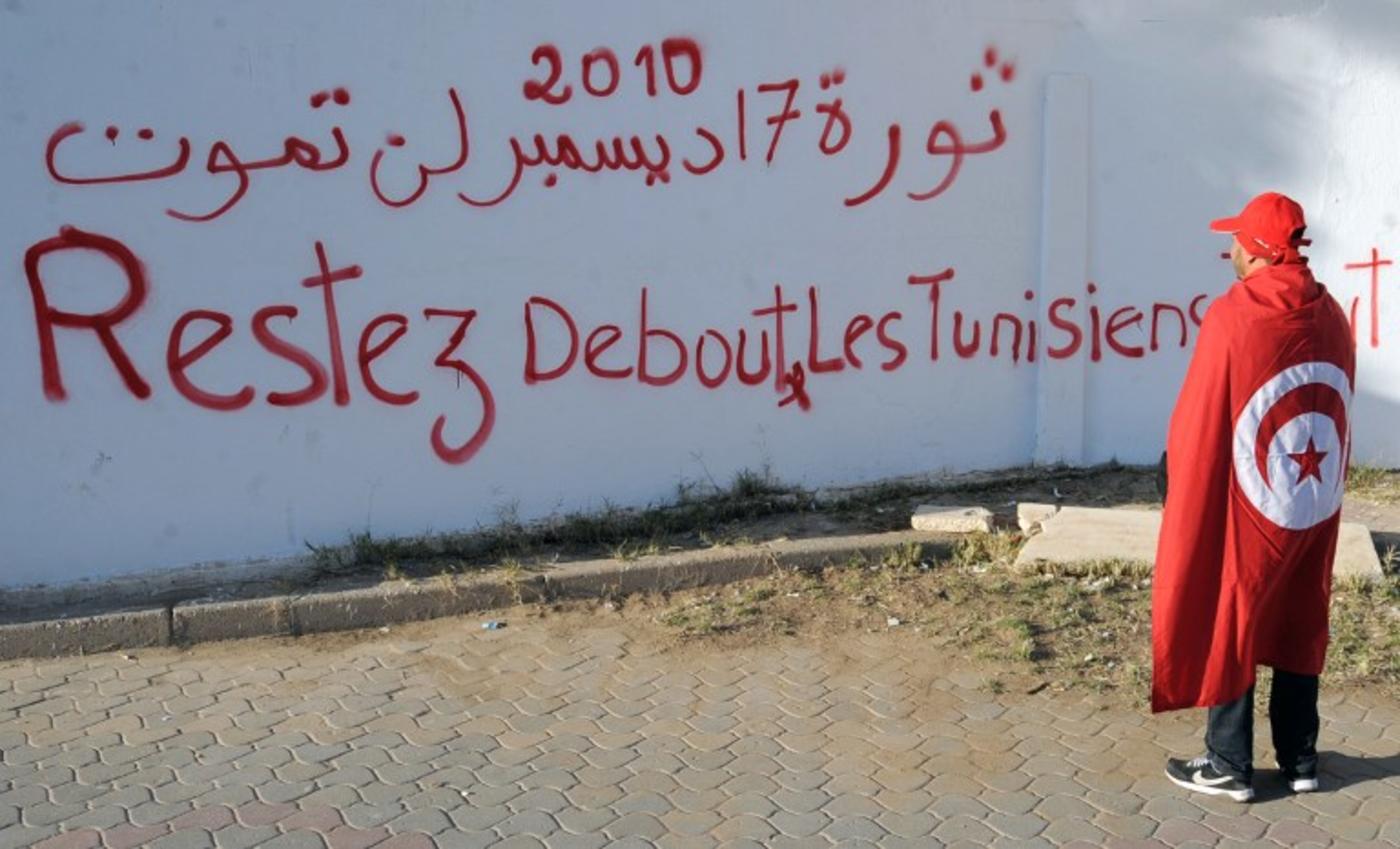 Fourteen billion dollars – that was the grand total of financial support pledged to Tunisia by more than 70 participating countries and financial institutions at the Tunisia 2020 summit last week.

The pledges have filled Tunisians with a fresh wave of optimism that the economic demands of the 2011 revolution will finally be realised. As one delighted minister put it, 'Tunisia is back!'

The conference, attended by 4,500 guests and 1,500 economic partners, aimed to generate aid and investment for more than 140 large-scale projects to help strengthen Tunisia’s ailing economy, generate 400,000 new jobs and support its democratic transition.

The pledges of assistance have filled Tunisians with a fresh wave of optimism that the economic demands of the 2011 revolution will finally be realised. As one delighted minister put it, “Tunisia is back!”.

Tunisia’s leaders have long called for support for the democratic transition, some demanding a Marshall plan of its own to keep the country safely on the path to democracy given the challenges it faces – and its strategic importance - in a regional context plagued by military rule, despotism and chaos.

Nearly six years after launching the Arab Spring, Tunisia remains the only country still committed to democratising - and that has had an economic cost.

As a result of instability, the country has seen the withdrawal of over 500 companies since 2011 and a big drop in foreign investment. Business does not take kindly to political change and uncertainty – even if it seems to be going in the right direction.

The list of top pledges reflects the strategic outlines of Tunisia’s foreign relations. The strongest messages and gestures of support came from France, the European Union, Qatar and Turkey.

France, with its colonial ties and significant investments in the country, sent an 80-strong French delegation including Prime Minister Manuel Valls along with  40 French companies pledging loans of three billion dinars and a donation of around $26m.The European Union promised to mobilise around $860m by 2020 and its European Investment Bank promised loans of$3.1bn by 2020.

The EU is in the midst of negotiating a new free trade agreement with Tunisia as well as a visa facilitation and readmission agreement aimed at “helping the Tunisian authorities to manage migration flows responsibly and humanely”.

Given the political impact of the migration crisis in Europe, EU leaders are clearly keen to push Tunisia to take on a role in keeping migrants on the far side of the Mediterranean.

Indeed, Angela Merkel recently called for a similar arrangement to the one which the EU has with Turkey, which would require Tunisia to take back migrants crossing into the EU, even though the country has few facilities and an inadequate legal framework for managing large numbers of migrants. The biggest donation at the conference came from the Emir of Qatar - the only foreign head of state to attend – who pledged $1.25bn in aid, the biggest single donation to Tunisia since the revolution.

Surprisingly, Saudi Arabia, which has opposed the Arab Spring and poured billions into preventing democratic change in Egypt and Yemen, pledged $800m in loans and aid, in a sign that it is reconsidering its strategic calculations. Less surprisingly, the United Arab Emirates was conspicuously absent, consistent with its hostility to the Arab Spring and its efforts to “contain” democratisation in the region.

Notably, most of the promises of funding came in the form of loans, which adds to Tunisia’s existing debt problem. In 2011, Tunisia spent $2.3bn (over 16 percent of government revenues) on foreign debt payments – more than it spent on public health and nearly as much as it spends on education.

Instead of drowning in further external debt, the Tunisian state should be exploiting the internal sources of revenue it has

Tunisia’s external debts already amount to around $27bn, or 69 percent of GDP. In total, the country pays more to international creditors than it receives in loans or grants. These new loans threaten to deepen an already vicious cycle of indebtedness.

Instead of drowning in further external debt, the Tunisian state should be exploiting the internal sources of revenue it has. The World Bank reported in 2015 that Tunisia is losing at least $1.2bn a year as a result of tax evasion by companies belonging to well-connected elites.

This is without counting the taxes the state loses out on from the informal sector, which makes up a staggering 53 percent of the economy. This means that tax revenues are only around 20 percent of GDP compared with 35 percent in OECD countries.

Tunisia would also stand to gain massively by addressing corruption, which the World Bank estimates costs the economy 2 percent of GDP per year (around $1bn).

Will the new pledges of support lift Tunisia out of economic stagnation? Tunisia received around $7bn in assistance (including loans) between 2011 and 2015, but there are two key problems in how that assistance was spent.

First, the funds are often not invested to generate jobs but to plug short-term gaps, such as paying salaries for the 800,000 public sector workers, which takes up 38 percent of the government’s budget (or 13.5 percent of GDP, one of the highest in the world).

While that is essential revenue for many families, it does not help generate the new jobs desperately needed, particularly for graduates who led the revolution and make up over 30 percent of the unemployed.

The second problem is actually delivering the projects for which assistance is earmarked. Tunisia already has a backlog of large-scale projects - in October 2015, the prime minister announced that there were at least 10 billion Tunisian dinars ($5bn) worth of stalled public infrastructure projects.

Officials estimate that more than $1.8bn in international assistance for development projects remains unspent because the necessary approvals and contracts are not in place, thanks to a notoriously slow bureaucracy, complicated public procurement rules and corruption.

A recent Carnegie report highlighted how cumbersome, centralised decision-making slows down development projects and leads to flagrant regional inequalities, with two-thirds of government investments allocated to developed coastal areas to the detriment of the country’s marginalised interior.

Start of the revival?

Tunisia 2020 promises to give Tunisia a new boost to revive its ailing economy and restore hopes of a better life for its excluded youth, who make up 85 percent of the unemployed and who are still waiting to taste the tangible benefits of the revolution they created.

Of the $25bn Tunisia was promised in 2011, only $7bn or so eventually trickled through. Let’s hope Tunisia 2020 is different

The country has an educated workforce, strong state institutions and a strategic location at the crossroads of the Middle East, Africa and Europe. What it needs is not only investment but fresh thinking and strong political will to reform the state and establish a new social contract between the state and its citizens based on equitable taxation, transparency, fairness and accountability.

Tunisia 2020 could be the start of the economic revival Tunisia needs to create jobs and continue on the path to democracy – but only if it is taken as an opportunity to push for deeper political reforms.

Just a few months after the start of the Arab Spring, in May 2011, a new initiative was launched to support Arab countries undergoing transition - the Deauville Partnership. The conference generated $40bn of promises of aid to Tunisia and Egypt on the part of the G8 countries, Gulf countries and international financial institutions to support democratic reform.

Of the $25bn Tunisia was promised, only $7bn or so eventually trickled through. The initiative has become a byword in Tunisia for unfulfilled international promises of support. Let’s hope Tunisia 2020 is different.

- Intissar Kherigi is a Tunisian-British researcher and PhD student at Sciences Po Paris in Comparative Political Sociology. She holds a BA in Law from Kings College, Cambridge University and a Masters in Human Rights from the London School of Economics and Political Science. She is a qualified solicitor and has worked in the UK House of Lords, the United Nations and the European Parliament.

Photo: A Tunisian man draped in the national flag reads graffiti written in French, "Stay standing Tunisians", along Mohammed Bouazizi Avenue, in the impoverished central town of Sidi Bouzid, on 16 December 2013, where the self-immolation of a 26-year-old street vendor in December 2010 led to the uprising that forced veteran president Zine El Abidine Ben Ali to flee the country (AFP) 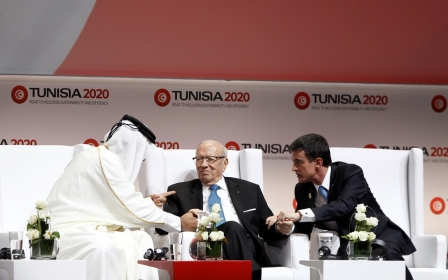 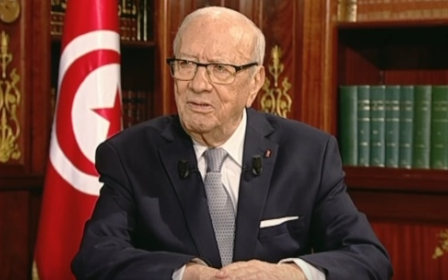 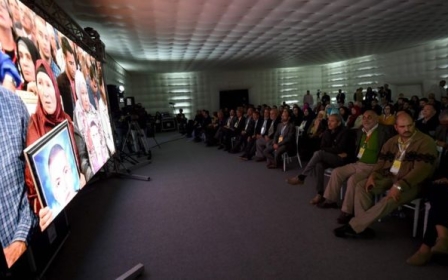 Tunisia Politics
Jailed, tortured and forced into exile: In Tunisia, now we have our moment of truth