After Gaza: Europe scrambles to end its complicity

Omar Barghouti
The international surge in condemnation of Israel’s treatment of Palestine, and Gaza in particular, underlines the growing impact of BDS 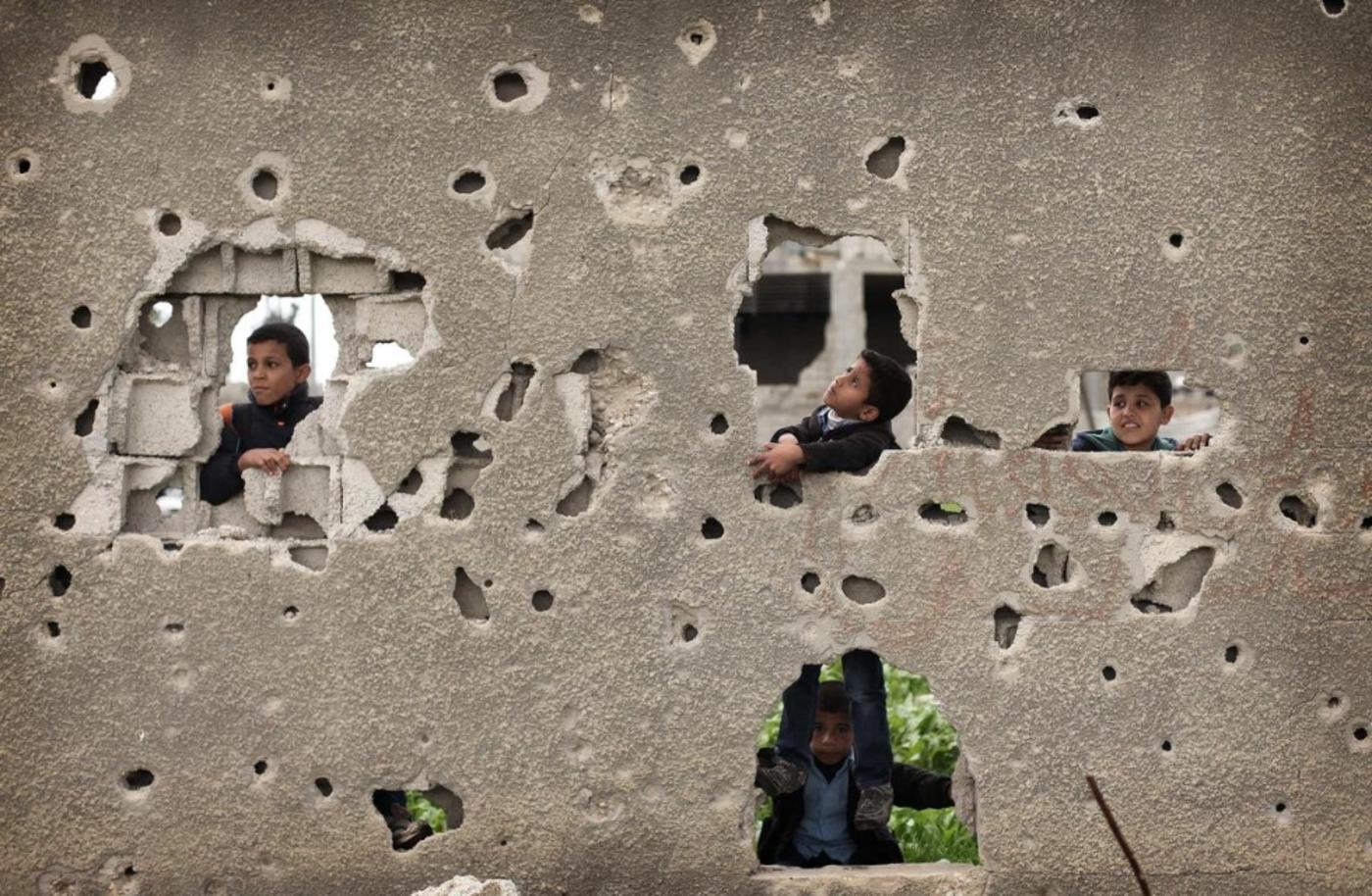 While still deeply complicit in perpetuating Israel’s occupation and enabling its commission of grave violations of international law, the European Union has taken a number of measures lately that may indicate a growing appetite for sanctions against Israel for its failure to progress towards a peaceful settlement with the Palestinian Authority.

The Israeli daily Haaretz last week published a leaked EU document discussing possible sanctions against Israel and against European companies involved in the construction and infrastructure of illegal Israeli colonial settlements in the occupied Palestinian territory, including East Jerusalem.

The document also calls for banning contact with Israeli settlers and public figures who reject the “two-state solution”, a measure that “could lead to a boycott of senior government ministers such as Naftali Bennett and Uri Ariel of Habayit Hayehudi, many Knesset members from Likud, and, even in extreme cases, President Reuven Rivlin”.

European diplomats explained the background of this talk of sanctions saying: “This is a sign that a great deal of anger and frustration exist in the member states. In recent months there were meetings of European foreign ministers in which ministers, who are considered extremely close to Israel, spoke in the most critical way against the policies of Netanyahu’s government.”

Israel’s latest assault on Gaza, condemned as a “massacre” by Brazil’s president and even France’s foreign minister, has exacerbated this anger and further eaten into Israel’s already thinning support in European public opinion. A former British Deputy Prime Minister and former French Prime Minister called for sanctions. The deputy chairman of Germany’s second largest party, Ralf Stegner of the center-left Social Democratic Party, called for an arms embargo on Israel, Saudi Arabia and QataOn 7 November, the EU voted as a bloc in support of several UN resolutions upholding the rights of the Palestine refugees as stipulated in UN resolution 194 and condemning, among other violations, Israel’s settlements as an infringement of the Fourth Geneva ConventA spate of resolutions by European parliaments recognizing the “State of Palestine” is seen by Israel as a clear indicator of official Europe’s frustration with Israel and wide discontent with its policies, in spite of the fact that this recognition falls well short of meeting European states’ obligation to uphold the inalienable rights of the Palestinian people.

Seeing, however, how swiftly the EU adopted sanctions against Russia for alleged violations in the Ukraine that pale in comparison to Israel’s war crimes in Gaza and Jerusalem, one cannot but accuse Europe of sheer hypocrisy for still debating sanctions against Israel after decades of occupation, ethnic cleansing and other serious human rights violations.

Far from reflecting a principled approach that consistently upholds human rights and international law, talk of European measures against Israel mainly reflects the attrition of support for Israel among European publics and the growing impact of the global, Palestinian-led Boycott, Divestment and Sanctions (BDS) movement at the grassroots and civil society levels.

A glimpse at the quick deterioration of the country’s standing in European civil society may hold the key to explaining the debate in the EU on possible sanctions against Israel. A call this month on the EU to suspend its Association Agreement with Israel, the main mechanism of collaboration between the two sides, was signed by more than 300 European political parties, leading trade unions, prominent NGOs and other groups for the first time ever.

Even before Gaza, a 2014 BBC poll showed Israel competing with North Korea as the third- or fourth- worst-perceived country in the world in the opinion of two-thirds majorities across Europe.

Much of Israel’s near pariah status among Europeans can be attributed to increased awareness of Israel’s crimes against the Palestinians, its political shift to the fanatic right and effective BDS campaigning.

Begun in 2005 by the largest coalition of political parties, trade union federations and mass organizations in Palestinian society, BDS calls for ending Israel’s 1967 occupation, ending its institutionalized racial discrimination, which fits the UN definition of apartheid, and upholding the right of Palestinian refugees to return to the homes and lands from which they were uprooted and dispossessed in 1948.

BDS was already perceived by Israel as a “strategic threat” well before the recent devastation of Gaza. As a result of the high human toll of Israel’s assault on Gaza and its unprecedented colonization of the occupied West Bank, especially in and around East Jerusalem, BDS has witnessed an exceptional streak of qualitative successes.

Israel’s international isolation, which a White House official warned may become a “tsunami” if Israel failed to end its “occupations”, is predicted to escalate. With Secretary of State John Kerry’s mediation efforts spectacularly failing in the face of Israeli intransigence, a fresh Palestinian near-consensus has emerged seeking to achieve basic Palestinian rights outside the framework of endless negotiations begun in Oslo two decades ago.

Indeed, Palestinians are finding widespread international support, including at the grassroots level in the U.S. and Europe, to pressure Israel economically, academically and otherwise to abide by international law and end its subjugation of Palestinians.

Kuwait was the first member of the Organization of Islamic Cooperation to comply with the organization’s decision, taken at the height of the Israeli assault on Gaza in August, to “impose political and economic sanctions on Israel, and boycott the corporations that operate in the colonial settlements built on occupied Palestinian territory”.

The Kuwaiti ministry of trade and industry announced that it will no longer deal with 50 international companies and institutions that operate in settlements, a precedent-setting measure that is likely to have considerable repercussions on the viability of corporate involvement in settlements.

Israel’s war crimes in Gaza and the fact that the offensive won the support of 95 percent of Jewish Israelis have further eroded its support among liberal and progressive Jewish communities worldwide. A recent poll by J Street, an Israel lobby group in the US, revealed that 15 percent of Jewish Americans support BDS against Israel. It also became considerably more tolerable for one-time Zionist thinkers to distinguish Israel from Judaism or to describe Zionism as a “xenophobic and exclusionary” ideology that is founded on “an untruth, on a myth, that Palestine was a country without a people”.

A well-read Jewish American journalist went as far as creating a #JSIL, standing for Jewish State in the Levant.

In a first, 327 Jewish Holocaust survivors and descendants published a half-page ad in the New York Times under the slogan, “Never Again for Anyone!”, condemning the “ongoing genocide” against the Palestinians and calling for “the full economic, cultural and academic boycott of Israel”.

A call for a military embargo on Israel launched by six Nobel laureates and dozens of celebrities has been signed by tens of thousands. Amnesty International has built on its call for a military embargo on Israel by urging the US government to block a shipment of fuel destined for use by the Israeli military. Oxfam International has also issued a call for an end to arms sales to Israel.

Israel’s supporters in Hollywood reacted furiously when Oscar winners Penelope Cruz, Javier Bardem and Pedro Almodovar joined almost 100 other artists in Spain in accusing Israel of “genocide”, with some producers “blacklisting” Cruz and Bardem, further indicating the rise of a new McCarthyism that uses unconditional support for Israel as the ultimate test of loyalty.

Heeding calls by the BDS movement to block Israeli ship operations at ports, dockworkers and community activists in Oakland, California succeeded in preventing an Israeli ship from offloading for several consecutive days.

Particularly alarming to Israel is the fact that the boycott this time went well beyond Europe, reaching India, Turkey, South Africa, and even the captive economy of the occupied Palestinian territory. For the first time in decades, Palestinian consumers, businesses and a number of municipalities joined, for the first time in decades, a flood of effective popular boycotts against Israeli goods, despite the practical challenges posed by the occupation.

The uninterrupted rapid growth of BDS in mainstream circles over the last two years has caused an acute sense of urgency in Israel to up the ante of its efforts to crush the nonviolent human rights movement.

This growth of the BDS movement is starting to turn the tide against Israel’s regime of occupation, settler-colonialism and apartheid, even among decision makers.

Israel may soon be facing its South Africa moment.

-Omar Barghouti is a Palestinian human rights activist and co-founder of the Boycott, Divestment and Sanctions (BDS) movement for Palestinian Rights.