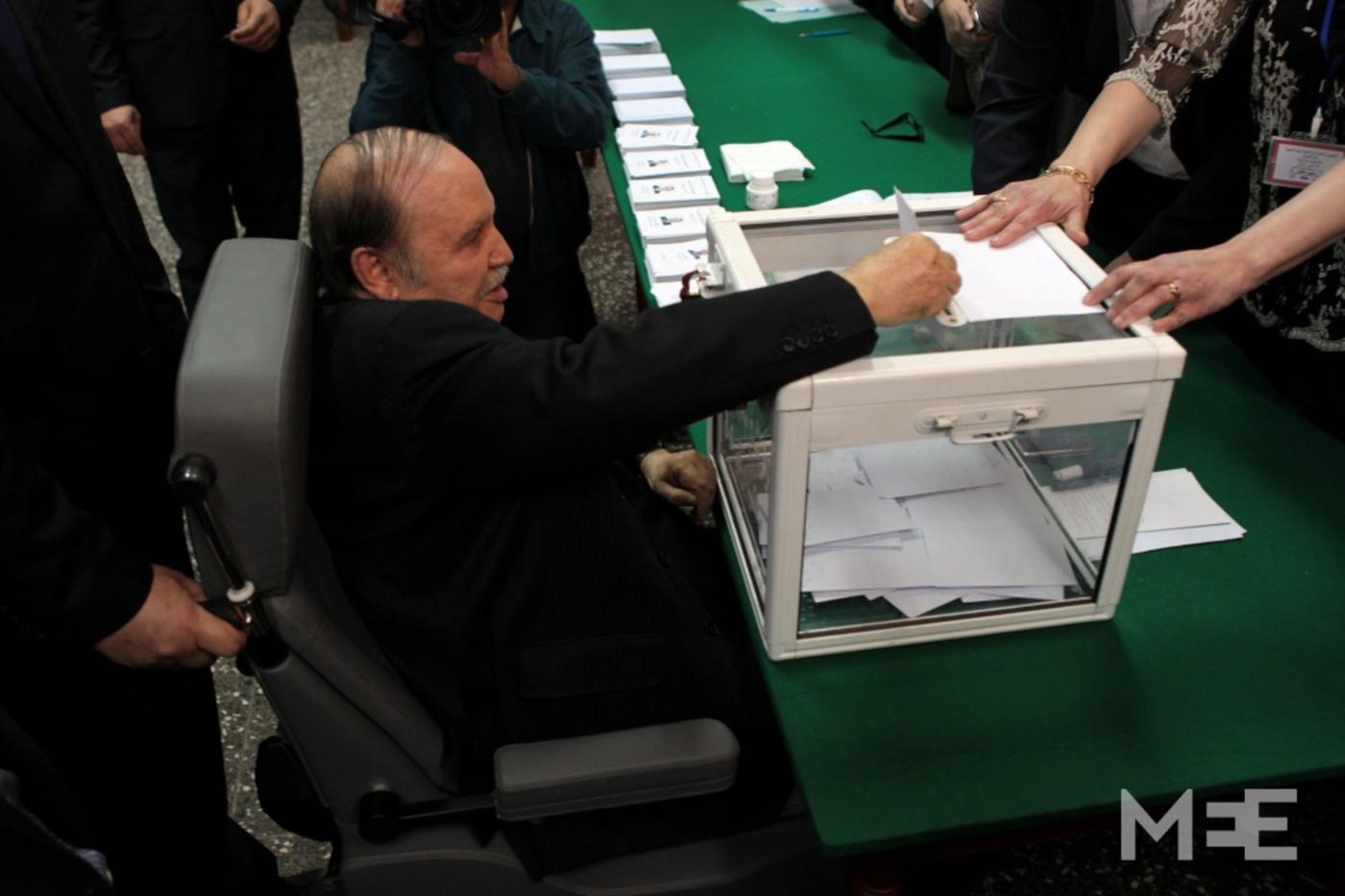 Since Algeria’s ailing 77-year old President Abdelaziz Bouteflika finally announced, after months of speculation, that he would stand for a fourth term, most media have taken it as a foregone conclusion that he would win a presidential election on 17 April. That is not because he will receive more votes than Ali Benflis, his only serious challenger, but because Algerian ballots are rigged to ensure the victory of the regime’s chosen candidate. The four other candidates are irrelevant.

This time, however, when the polls close, Algeria’s rulers could find themselves in a tricky situation. That is because a massive boycott, combined with the distinct possibility that Benflis will win more votes than Bouteflika, will make ballot-rigging more difficult than usual.

There are five reasons why Benflis might get more votes than Bouteflika.

One is that Bouteflika does not have the support of the whole regime. A large portion of it, perhaps around 30%, along with most of the country’s media, not to mention the population, is strongly opposed to a Bouteflika fourth term, believing that he is too incapacitated after his stroke last year to run again for office. His detractors, including senior personalities such as former president Liamine Zeroual, are strongly opposed to this. Cartoonists and deriders portray him as “unable to walk and talk”.

Secondly, and related to this lack of control, there have been times over the last few years when the regime has looked like it was being torn apart by a power struggle between the presidential circle and the powerful intelligence service, the Département du Renseignement et de la Sécurité (DRS) headed by General Mohamed (“Toufik”) Mediène. Bouteflika’s enemies in the regime, concerned at saving their own skins, have fallen into line over the last two to three weeks, but many of them will be rooting for Benflis.

Thirdly, Algeria is an endemically corrupt “mafia state” with the Bouteflika family at the apex of that corruption. The recent showing on television of a video made by Ali Kafi, former chairman of the High Council of State, before he died, in which he said that Bouteflika was a “thief” because he embezzled £13.7 mn while serving as the country’s foreign minister from 1963-1979 and therefore someone who could not be trusted to serve Algeria’s interests, was immensely damaging to Bouteflika.

Fourthly, Bouteflika’s popularity has plummeted since his announcement to run for a fourth mandate. Aside from his failure to deliver on any of his promised political reforms, Algerians are angry as they say he is humiliating Algeria and being foisted on them in complete disregard for any semblance of democracy.

Finally, although Benflis is also a member of the regime (He was the prime minister from 1999 to 2004), and therefore not popular, he is less unpopular than Bouteflika. He has also made some popular pre-election promises such as opening the Moroccan border and recognizing the banned Front Islamique du Salut (FIS).

Both Islamist and secular opposition parties have long-called for an election boycott, on the grounds that the vote is fraudulent. A new civil society movement called “Barakat!” (“Enough” in Arabic), opposed to a fourth term, has mobilized even more opposition against Bouteflika in the last few weeks. Not surprisingly, campaigners, especially Bouteflika’s representatives, have been greeted by cynicism, disinterest, anger and violence, with many meetings having to be cancelled through non-attendance.

What will the government do on 17 April when faced with a turnout unlikely to exceed 15 percent and the possibility of Benflis outperforming Bouteflika?

Rigging the ballot will be particularly difficult now that Benflis has told the world his main adversary is fraud. A former senior wali (governor), Bachir Frik, admitted on TV last week that walis were ordered to rig ballots.

When Benflis last challenged for the presidency in 2004, he was humiliated with an “allocation” of 6.4 percent of the vote against Bouteflika’s 85 percent, on a 58.1 percent turnout. Unless the government this time “allocates” Benflis at least around 30-35 percent, it will not be believed. Likewise, an above 50 percent to legitimise Bouteflika’s “victory” will defy credibility.

Much will depend on how Benflis plans to handle the situation. Will he fight, or simply walk away as he did in 2004?

Normally, the declaration would be expected between midday and 4pm on 18 April. However, we expect the Bouteflika camp to claim victory soon after the polls close. But if Benflis decides to follow suit, we will have both candidates claiming victory.

In that case, what would happen? Several possible scenarios are in the mix. The Bouteflika camp is most likely to simply declare Bouteflika the winner and not care about what happens. The people, however, might well try and push for Benflis, with more demonstrations likely.

We can only speculate on how the army might react. In the first instance, General Gaïd Salah, Algeria’s Chief of Staff and Minister-delegate of Defence, would most likely leave the situation to the police. Yet if the situation for the government got worse, it is conceivable that he could intervene.

One scenario is that he would intervene for Bouteflika, to whom he is closely wedded. On the other hand, he might well come under pressure from senior army commanders to back Benflis, possibly with the promise that he would remain chief of staff and defence minister. An embarrassing number of senior retired generals and colonels have already publically expressed their opposition to a Bouteflika fourth term. Many active senior officers, who have so far remained silent, undoubtedly think the same way.

We can thus see a situation developing in which senior echelons within the army and elsewhere across the regime become aware of the fact that a fourth Bouteflika mandate, especially under these circumstances, could quickly destroy the regime. On the other hand, a Benflis presidency would be likely to invigorate the regime and give it another 4-5 years. Those who will “decide” are not ideologues: they are concerned with their positions and the regime’s survival.

The views of the diplomatic corps cannot be discounted. They have also seen how unpopular Bouteflika has become and how disastrous his reinstatement as president could be for Algeria. Will France and other key Western countries shift their support towards Benflis or take a huge risk with Bouteflika?

The two or three days after the polls close could therefore be decisive. But, as all “Algeria-watchers” know, it is a country that never ceases to surprise.