Are Iran and Trump headed for a bust up?

Shahir Shahidsaless
Even if Trump keeps the nuclear deal, it's possible US sanctions could be imposed again, destroying the agreement at the worst time for Iran's economy 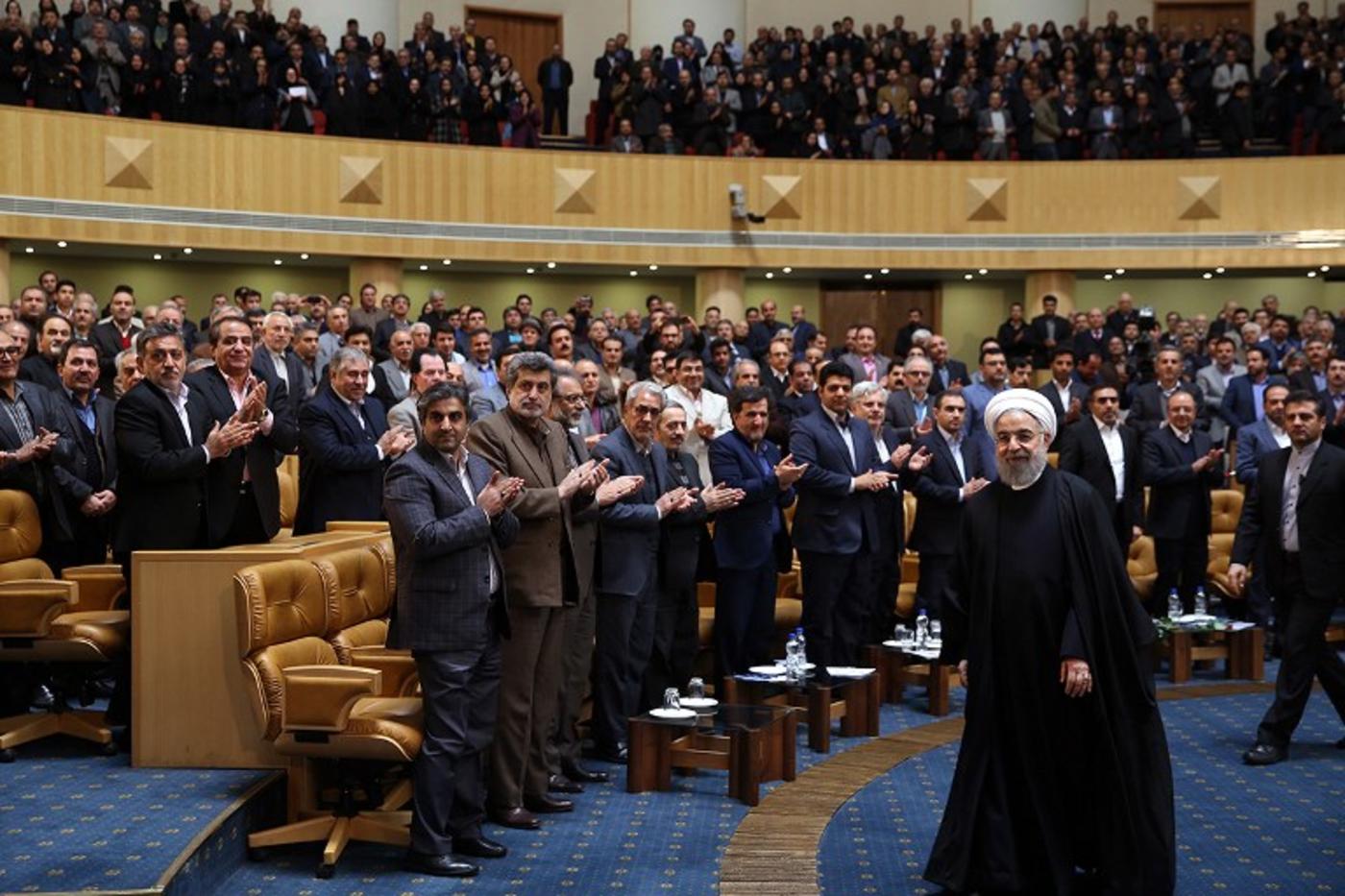 In a region characterised by tension, the importance of maintaining political relations between Iran and the US cannot be underestimated - it is this relationship that largely determines the geopolitical climate of the Middle East as the two states compete to project their own influence.

The trajectory of a decades-long antagonism and irreconcilable relations changed after Obama laid out his 2013 initiative to unlock the Iranian nuclear crisis, which was followed by the materialisation of the Joint Comprehensive Plan of Action (JCPOA), better known as Iran’s nuclear deal. However, the very existence of the deal makes it difficult for the US to confront Iran and analysts widely speculate that in the coming months two possible shifts may create a U-turn in US-Iran relations.

Ripping up the deal

The issue of the nuclear deal was centre stage in President-elect Donald Trump’s campaign. He made a variety of statements about the deal, calling it at various times “stupid,” a “lopsided disgrace” and the “worst deal ever negotiated”.

For critics in the US, the real problem with the deal is that it has practically paralysed the country to confront Iran if it needs to in the future

Early on, Trump said he would “dismantle the disastrous deal”. But later, Trump’s top foreign policy adviser confirmed that he will neither dismantle the deal nor implement it “as is”. Rather, Trump, according to an adviser, “is going to renegotiate it”.

Iran hawks, Democrats and Republicans alike, cheered Trump’s position. In their eyes, the problem with the deal is not just that Iran can retain the infrastructure of and continue uranium enrichment. Rather, their real problem with the deal is that it has effectively paralysed the US's ability to confront Iran if it needs to in the future. Next to military action, sanctions are the best weapon to use to tame hostile governments, but if the US imposed new sanctions on Iran, the deal would effectively collapse.

However, there are challenges even beyond the nuclear deal. Iran is steadfastly determined to - and will - expand its missile programme, something the US establishment as a whole is against. Iran also will not withhold its unwavering support of Hezbollah, which both the US and Israel allege supports terrorism.

Most importantly, Iran challenges US hegemony in every corner of the region. The fall of Aleppo was a clear manifestation of the decline of American influence in the region and the emergence of a new order in which Iran will play a major role as a regional power.

Some notable nuclear deal critics suggest that Trump can secure “an agreement with Iran to verifiably curb its regional aggression. … In exchange, Iran could be given broad-based sanctions relief and even normalization of relations.”

What incentives would Iran have to negotiate a new agreement to please Trump? None at all.

If Trump takes that route, he would be the seventh American president to try to change the identity of the Iranian government. Good luck!

Meanwhile, a renegotiation would be extremely difficult. The nuclear deal is a seven-nation accord that was concluded after more than a decade of crisis - at some points inching toward a war between Iran on the one side and Israel and the US on the other - and almost two full years of negotiations. What incentives would Iran have to negotiate a new agreement to please Trump? None at all.

If the deal stays, then what?

However, in the place of a renegotiated deal or a new deal to curb Iranian aggression, two developments may occur.

First, Trump and his Treasury Department may refuse to renew waivers on existing sanctions. Every 120 or 180 days - depending on the relevant sanctions law, according to the nuclear deal - the president and treasury are supposed to issue these waivers.

Secondly, considering the climate in Congress, and the fact that the defeated critics of the nuclear deal are impatiently waiting for Trump to take office, passing a sanctions law against Iran is a possibility.

Both cases could violate the nuclear deal, which obliges the US to suspend major sanctions against Iran. Moreover, an American violation of the deal would violate international law, given that the pact is endorsed by the UN Security Council.

If either of these two scenarios happen, two further situations are possible.

Iran could walk away from the deal, a “golden opportunity” for which radicals in Iran are impatiently waiting and an act which would seriously increase the likelihood of a war between Iran and the US.

Or the Europeans could stop cooperating with the US, disregard its move and continue business with Iran, provided that Iranians stay committed to the deal. In this scenario, the US and Iran's hostile relations would escalate as happened in the 2005-2009 period, when Ahmadinejad's and George W Bush's presidencies coincided.

Moreover, Trump's National Security Adviser Michael Flynn’s theory of “regime change” in Iran - which he has written about in his book The Field of Fight: How We Can Win the Global War Against Radical Islam and Its Allies and which he has discussed before the House foreign affairs and armed services subcommittee in June 2015 - would likely become the administration’s doctrine of choice.

The moderates (also known as pragmatists), reformists and moderate conservatives have formed a coalition against their rivals - the self-branded principlists which include conservatives and hardline conservatives.

Although the majority of analysts in Iran predict a Rouhani election victory, the vast dissatisfaction with his administration’s economic performance cannot be ignored

With the death of Iran’s former president Akbar Hashemi Rafsanjani, who died on 8 January, the moderate camp has lost its spiritual leader. Now Iranian President Hassan Rouhani is expected to carry the torch and lead them.

Hardliner strongholds are deeply entrenched in the Iranian establishment. Among them are the Islamic Revolutionary Guards Corps (IRGC), the large paramilitary Basij militia, which works under the supervision of the IRGC, the police forces and the perennially conservative judiciary.

Meanwhile, on any occasion in the past that this faction and the moderates have clashed on any type of issue (be it over interpretation of Islam, or governance, or foreign policy), Iran’s leader Ayatollah Ali Khamenei has taken the radicals’ side.

Principlists reject a liberal reading of Islam, and their hardline branch believes in maintaining hostile relations with and resisting the “global arrogance led by the US”. The moderates, unlike their opponents, believe in interaction with the West, including the US.

As has been expected, as the May presidential elections in Iran near, antagonism between the two rival camps has reached new heights. In an unprecedented development, Rouhani and the radical head of the judiciary, Ayatollah Sadeq Larijani, have publicly accused each other of cases of corruption and demanded clarification from their opponent.

Although the majority of analysts in Iran predict a Rouhani election victory, the vast dissatisfaction with his administration’s economic performance cannot be ignored. According to the latest poll conducted last year by the Center for International and Security Studies at the University of Maryland, eight out of ten Iranians say that the economy is not improving, while three out of four say Rouhani has been unsuccessful in reducing unemployment.

In practical terms, it will be impossible for any administration to fix the economy if paralysing sanctions are re-introduced

If they introduce a new face who can run on a platform centred on highlighting Rouhani’s economic failure, with strategies to pull the country out of stagflation, and combat widening wealth and income inequality, which has no place in the religiously market-minded agenda of Rouhani and his team, the principlists could have a chance to win.

If Rouhani is elected, there would be no change in US-Iran relations from Iran’s side so long as the Trump administration cooperates in the implementation of the nuclear deal.

If a principlist is elected, many analysts, even in Iran, have predicted that tension between Iran and the US could rise to the point that the deal would collapse and radical policies toward the US, as seen during the Mahmoud Ahmadinejad’s presidency, could return.

But this argument is flawed. It is true that rhetoric and verbal confrontation will most likely heighten, however, in practical terms, it will be impossible for any administration to fix the economy if paralysing sanctions are re-introduced.

Iran’s leader has realised the sensitivity of the issue. That is why he has repeatedly emphasised - as recently as this week - that “Iran will not initiate the violation of the JCPOA. Being loyal to one’s covenant is a Quranic order."

- Shahir Shahidsaless is an Iranian-Canadian political analyst and freelance journalist writing about Iranian domestic and foreign affairs, the Middle East and US foreign policy in the region. He is the co-author of Iran and the United States: An Insider’s View on the Failed Past and the Road to Peace. He is a contributor to several websites with focus on the Middle East as well as the Huffington Post. He also regularly writes for BBC Persian. You can reach him at [email protected] or follow him on Twitter @SShahisaless. Syria War
Iran: We don't want the US at Syria peace talks in Astana