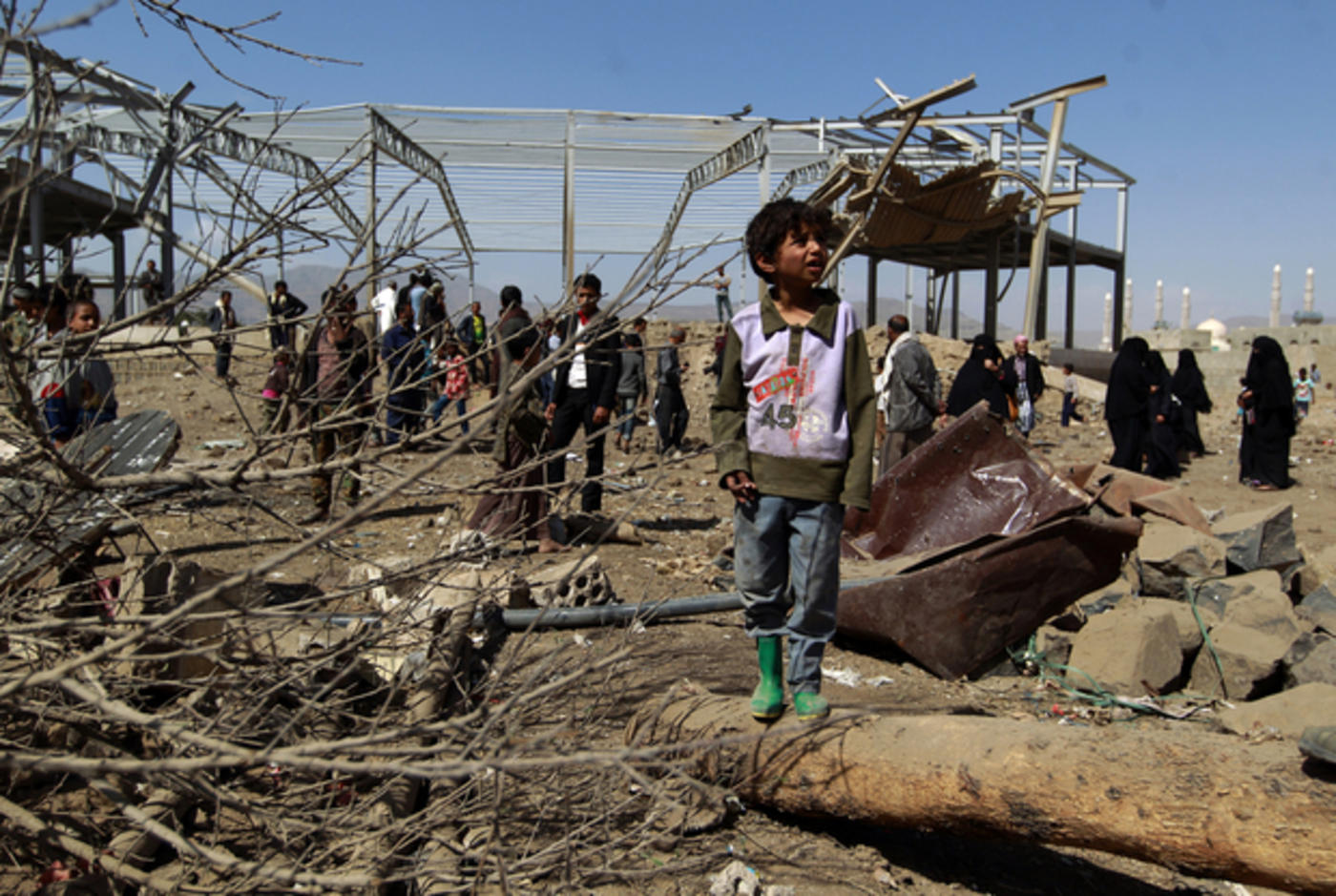 It has been over 600 days since Saudi-led forces began their bombing campaign in Yemen. Since then over 10,000 people have been killed, schools and hospitals have been destroyed and the people of Yemen have been left on the verge of famine.

Is there any low that the Saudi dictatorship could sink to that would see a change in policy?

It is often referred to as a ‘forgotten war’, but the dire situation climbed the news agenda last month when Saudi forces bombed a funeral, killing almost 150 people.

The situation is desperate. The few short-term ceasefires that have been negotiated have offered limited respite, with serious violations being committed by all sides on an almost daily basis.  A new one is scheduled to take force on 17 November, but there is little reason to think it will fare any better.

The deaf ears of Whitehall

There is a growing international pressure on Saudi Arabia and the coalition forces to end the air strikes, which have been responsible for the majority of deaths in the ongoing civil war.

The devastation they have unleashed has been immoral, and there is a compelling and growing body of evidence that makes it clear that international humanitarian law has been violated.

The UN general secretary, Ban Ki-Moon, has called on permanent members of the UN Security Council to do everything they can to secure peace. He is not the only one, with the European Parliament, Amnesty International and others calling for greater political pressure and an international arms embargo against Saudi Arabia.

One place where their calls have fallen on deaf ears is Whitehall. Despite growing parliamentary opposition and media scrutiny, government ministers have used every excuse they can to continue arming and supporting the Saudi regime.

The UK has backed the bombing since day one, when the then foreign secretary Philip Hammond pledged to “support the Saudis in every practical way short of engaging in combat.”

It’s a promise he’s stayed true to, with high-level political support and over £3.3bn worth of arms being licensed to Saudi forces, including fighter jets and bombs.

In September an authoritative cross-party report, produced by the House of Commons Committees on International Development and Business, Innovation & Skills, concluded that “it seems inevitable that any violations of international humanitarian and human rights law by the coalition have involved arms supplied from the UK".

Regardless, the government has stuck to the line that the arms exports are legitimate and above-board. This week it released its response to the committees' report, in which it said it was “confident in its robust case-by-case assessment and is satisfied that extant licences for Saudi Arabia are compliant with the UK’s export licensing criteria".

The response was unsurprising, after all, there is nothing new about UK governments providing uncritical support to the Saudi government.

Recent years have seen Tony Blair intervening to stop a corruption investigation into an arms deal with the Saudi authorities, David Cameron flying out to Riyadh to rub shoulders with Saudi royalty and Prince Charles sword dancing at a reception sponsored by BAE Systems to secure arms sales.

There may have been a change in personnel in Downing Street, but there is no reason to think Theresa May will act any differently.

The government rightly calls on Russia to stop bombing civilian areas in Aleppo, while arming and supporting Saudi Arabia as it does the same thing in Yemen

Last month, it was announced that irrespective of the ongoing bombardment, the government is working with BAE Systems to secure another generation of fighter jet sales.

There are serious questions about the influence of the Saudi royal family and arms companies interests, with the former business secretary, Vince Cable, going on record in saying that he was misled into agreeing to licence Paveway IV bombs to Saudi forces. Human Rights Watch has provided very strong evidence that these same bombs have been used against civilian targets.

The impact of this toxic relationship hasn’t just been to fuel the conflict by boosting and enabling the Saudi-led bombing, it has also debased UK foreign policy in the wider region.

It has led to a situation where the government is rightly calling on Russia to stop bombing civilian areas in Aleppo, while at the same time arming and supporting Saudi Arabia as it does the same thing in Yemen.

Unlike In Syria, where he wants the International Criminal Court to be involved, Boris Johnson has pursued the line that the best-placed people to investigate Saudi forces for war crimes are the Saudi Arabian government. This was made clear in September, when he wrote, “It is important that the Saudi Arabian-led Coalition in the first instance conducts thorough and conclusive investigations into incidents where it is alleged that international humanitarian law has been violated.”

The previous steps the Saudi regime has taken to investigate itself prove how bad a policy it is. During the summer, and prior to Johnson’s speech, the Saudi-led coalition published its own report into the conduct of its forces.

Needless to say it was a whitewash, only analysing eight of the hundreds of violations it has been accused of. However, even it had to concede that civilians were being killed.

READ: How Britain's party of war gave the green light to Saudi in Yemen

One example the Saudi report cited as a "mistake" was the bombing of a residential compound that killed 65 people, claiming that the victims died as a result of the “unintended bombing based on inaccurate intelligence information".

The "regrets" may feel half-hearted and insincere, but the fact that even Saudi forces have had to concede that they are killing civilians is a sign of how overwhelming the evidence and international condemnation has been.

The same excuse about inaccurate intelligence was used to explain the catastrophic funeral bombing, although there was no indication that either "incident" would lead to a change in policy from either Saudi Arabia or the UK.

We are always being told how "rigorous" and "robust" UK arms export controls supposedly are. But the ongoing arms sales to Saudi Arabia prove that nothing could be further from the truth.

What more would it take for the UK to finally stop arming the Saudi regime?

Next February, the legality of arms exports will be explored in a historic and unprecedented legal action. This follows a successful application for judicial review by Campaign Against Arms Trade.

The review will be a chance for the exports to be given the full scrutiny that they deserve, but if it is to make a difference, then it needs to lead to real and meaningful change. For that to happen, there needs to be a continued pressure from across the political spectrum.

The extent and consequences of this toxic relationship aren’t just an issue for parliament, they have consequences for all of us, and for how the UK is seen on the world stage.

If 10,000 deaths, the destruction of valuable infrastructure and extensive evidence of serious allegations of war crimes are not enough, then is there any low that the Saudi dictatorship could sink to that would see a change in policy?

What more would it take for the UK to finally stop arming the Saudi regime?

- Andrew Smith is a spokesperson for Campaign Against Arms Trade (CAAT). You can follow CAAT at @CAATuk.

Photo: A child stands in the rubble after an attack by the Saudi-led coalition in Sanaa last month (AFP)