With Bannon's appointment, it's official: Israel is comfortable with anti-Semitism 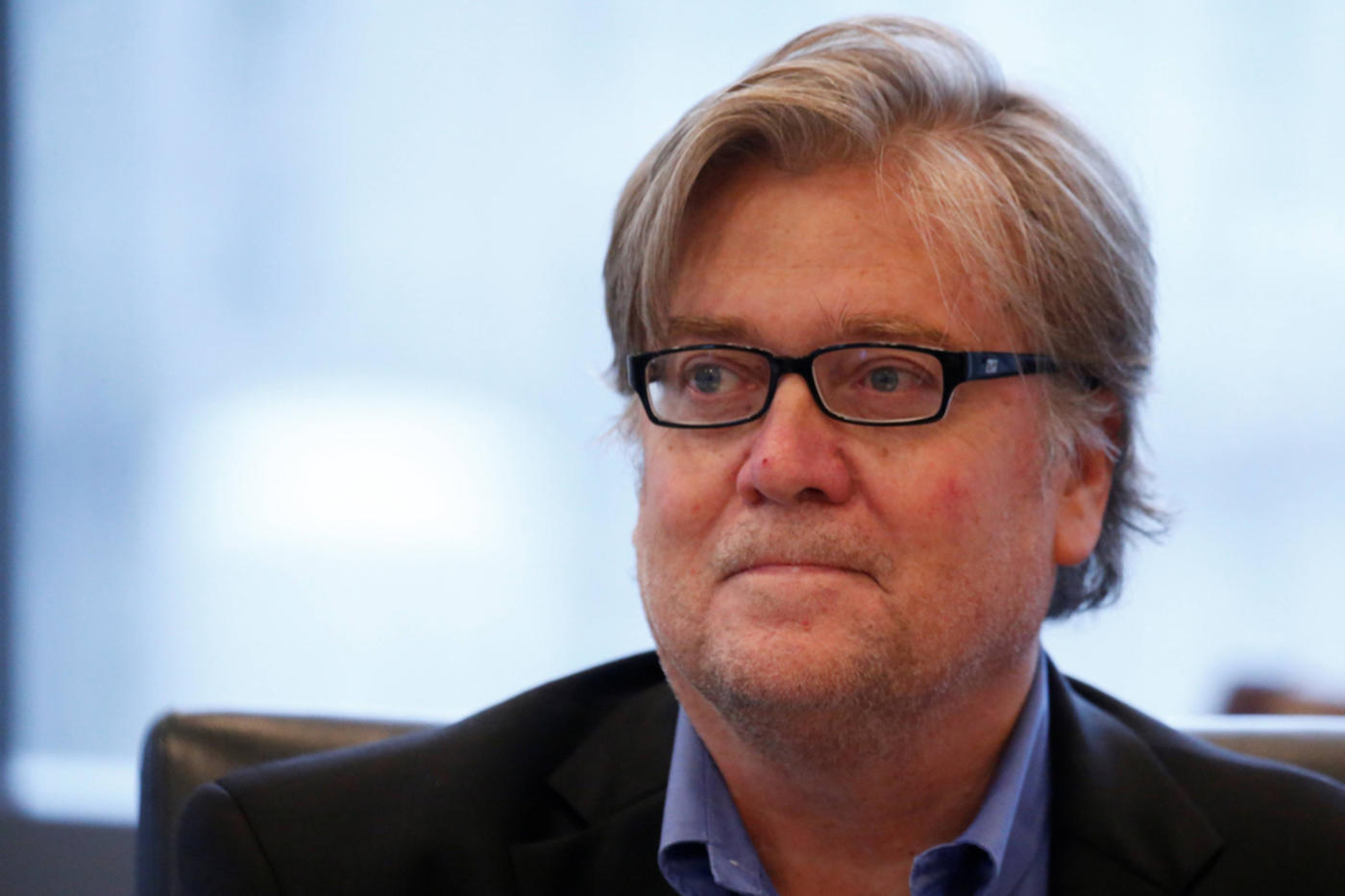 The cat is out of the bag: Israel is comfortable associating with people suspected of holding anti-Semitic and extremist right-wing views as long as they support it.

How else is it possible to explain Israel and its supporters’ lack of objection to the appointment of Steve Bannon as chief strategist for US President-elect Donald Trump?

Bannon’s own ex-wife Mary Louise Pickard accused him in court of having a problem with his daughters attending a particular school. The reason given was “the biggest problem he had with Archer is the number of Jews that attend. He said that he doesn’t like Jews and that he doesn’t like the way they raise their kids to be ‘whiney brats’ and that he didn’t want the girls going to school with Jews.” He also questioned why another school had “so many Hanukkah books in the library”?

It is important to note that the allegations were made in a custody battle. However, at least one of the allegations regarding the Hanukkah books incident was corroborated by a representative of the school in question.

As has been widely reported since his appointment to the Trump team, Bannon ran the far-right publication Breitbart News. Bannon was accused of presiding over “the premier website of the ‘alt-right’ – a loose-knit group of white nationalists and unabashed anti-Semites and racists” by the Anti-Defamation League’s CEO Jonathan Greenblatt, who is a staunch supporter of Israel.

Joining in the criticism, Rabbi Jonah Dov Pesner, director of the Religious Action Center of Reform Judaism, said in a statement:

“The president is entitled to choose advisors who he believes will help him implement his agenda. However, both in his roles as editor of the Breitbart website and as a strategist in the Trump campaign, Mr Bannon was responsible for the advancement of ideologies antithetical to our nation, including anti-Semitism, misogyny, racism and Islamophobia. There should be no place for such views in the White House.”

A speedy examination of Breitbart shows it has covered Israel sympathetically, but it also has covered the alt-right movement sympathetically by including individuals who have expressed homophobic, misogynist, white supremacists and anti-Semitic views. Matthew Tyrmand, a columnist for Breitbart News attacked Washington Post columnist Anne Applebaum, calling her a “Polish, Jewish, American elitist.”

One would have thought that Israel and its supporters would at least raise their concerns with the man Israeli Prime Minister Netanyahu called “a true friend of Israel”, President-elect Trump, or would at least seek clarification about Bannon’s past views. After all, anti-Semitism is not only wrong in its own right but has recently formed a major plank of attacks both on the British Labour Party and the Boycott, Divestment and Sanctions (BDS) movement.

Instead of raising concerns, Israeli officials and supporters have rallied around Bannon. Israel’s ambassador to the US, Ron Dermer, praised Trump and his team saying “Israel has no doubt that President-elect Trump is a true friend of Israel. We have no doubt that Vice-President-elect Mike Pence is a true friend of Israel, he was one of Israel’s greatest friends in the Congress, one of the most pro-Israel governors in the country, and we look forward to working with the Trump administration, with all of the members of the Trump administration, including Steve Bannon, and making the US-Israel alliance stronger than ever”.

Emeritus Harvard Law Professor and staunch supporter of Israel, Alan Dershowitz, leaped to Bannon’s support saying “I think we have to be very careful before we accuse any particular individual of being an anti-Semite. The evidence certainly suggests that Mr. Bannon has very good relationships with individual Jews. My former researcher, Joel Pollak, is an Orthodox Jew who takes off the Jewish holidays, who is a committed Jew and a committed Zionist, and he has worked closely with him. He has been supportive of Israel”. The clue is in the last sentence, "supportive of Israel".

Dershowitz went further in his defence: “So, I haven’t seen any evidence of personal anti-Semitism on the part of Bannon. I think the headline (on the Breitbart website) about a Conservative Republican being a renegade Jew was ill-advised. But it doesn’t suggest to me anti-Semitism. It suggests to me a degree of carelessness.”

Dershowitz has in the past accused Black Lives Matter, Jimmy Carter, Desmond Tutu and Richard Goldstone either of outright anti-Semitism or behaviour that he judged to be problematic in this regard. However, it is behaviour towards Israel or criticism of its practices that has formed the core of his assertions. The contrast with his take on Bannon could not be starker.

It is important to note that his appointment has been widely condemned by Jewish organisations, including Jewish Voice for Peace (JVP). In a statement, JVP's deputy director Rabbi Alissa Wise said:

“In President-elect Donald Trump’s choice of Steve Bannon – a leading white nationalist – as chief strategist, we are seeing a confirmation of exactly what Trump promised throughout his campaign: the open endorsement of racism, xenophobia, Islamophobia and antisemitism.”

The National Jewish Democratic Council feared that “Trump’s choice of Steve Bannon is just the first appointment of many individuals who have engaged in, or at least, tolerated anti-Semitism, racism and xenophobia”. The pro-Israel Group J Street also joined Jewish groups condemning Bannon. However, it is telling that the American Israel Public Affairs Committee (AIPAC) declined to take a position on Bannon claiming through its spokesman, Marshall Wittmann: “AIPAC has a long-standing policy of not taking positions on presidential appointments”.

However, is it a leap to conclude from the Bannon episode that Israel turns a blind eye to anti-Semites and extremists if they support it and its policies? Well, Bannon is no joe public. He is the most senior advisor to the President-elect of the United States and the future leader of the free world.

Israel and its supporters have perhaps judged that they could not have hoped for a better outcome form the US elections than a Trump win. The team he is forming is to their liking, so why rock the boat about an individual who I would contend would have been more problematic to them had he been called to serve in the Obama administration.

A price worth paying

If a President Trump fulfils his promise to move the US Embassy to Jerusalem, protects Israel at the UN Security Council and finally scuppers any chances of a Palestinian state, then tolerating a troublesome senior advisor in his administration is a price worth paying.

However, we are entitled to think that those of us who have been accused of anti-Semitism must feel aggrieved when we criticise Israel without demonstrating any hatred towards Jews. Those people would surely be happy to send their children to a school with Jewish children when Bannon would not.

That those people have been vilified as anti-Semites while Steve Bannon has been given a free pass, suggests there is a major anti-Semitism problem within the right wing that Israel is happy to ignore.

- Kamel Hawwash is a British-Palestinian engineering professor based at the University of Birmingham and a longstanding campaigner for justice, especially for the Palestinian people. He is vice chair of the Palestine Solidarity Campaign (PSC) and appears regularly in the media as commentator on Middle East issues. He runs a blog at www.kamelhawwash.com. He writes here in a personal capacity.

Photo: A file photo of Stephen Bannon, who was recently named to be Donald Trump's chief strategist in the White House (Reuters) 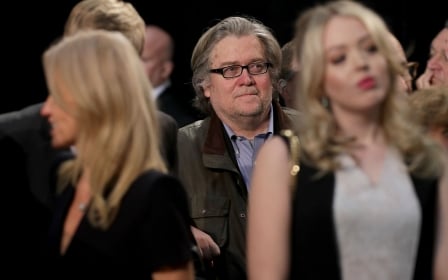