Britain's new foreign policy: You'd have to read Arabic to know about it 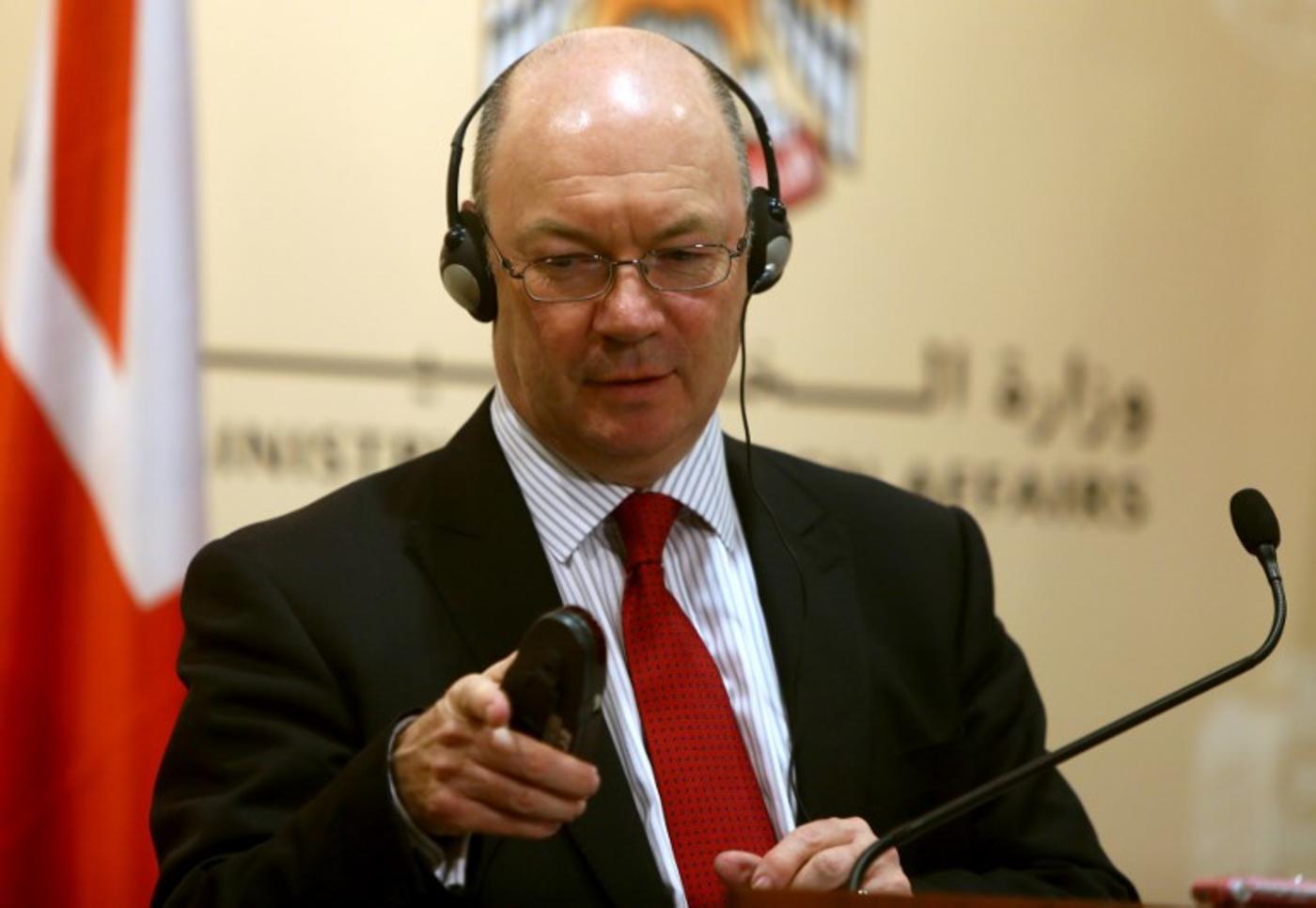 This was never convincing. Britain tacitly endorsed the coup. Neither prime minister David Cameron nor his ministers ever called the Sisi seizure of power by its real name – a coup d'etat.

Burt has sent out a message that was very deliberately calculated to delight not just the Egyptian military government, but also Saudi Arabia and its Gulf allies

There was however always an element of caution in Britain's approach to the Egyptian military government. This has now been abandoned.

During his visit to Egypt last week, there was no let up in Middle East Minister Alistair Burt's fulsome embrace of the Sisi regime.

A translation of Alistair Burt's piece in Al-Ahram
Read More »

Not merely that. Burt also declared British opposition to and contempt for the Muslim Brotherhood in a way that no British minister had previously done.

He sent out a message about the Muslim Brotherhood that was deliberately calculated to delight not just the Egyptian military government, but also Saudi Arabia and its Gulf allies.

'An end to this ambiguity'

In a groundbreaking article in the Egyptian paper Al Ahram - an establishment organ close to the regime - Burt devoted a substantial proportion of his piece to a direct attack on the Brotherhood.

He attacked it for links to extremism, while emphasising that Britain has imposed an outright ban on any contact with the organisation since 2013.

Burt said that "now is the time for everyone who defends the Brotherhood in London or Cairo to put an end to this confusion and ambiguity".

Not surprisingly, Burt's remarks have been greeted with profound pleasure in Cairo, where they have been seen as legitimising what many still see as an illegal regime. In addition, Burt's comments have given Sisi carte blanche to continue his brutal suppression of the Brotherhood.

This became clear when his article was picked up by pro-government figures as a vindication of Sisi's brutal policies.

According to Abdel Latif El Menawy, one of Cairo's best-known journalists, Burt was breaking new ground.

In an article published on Monday in the Arab News significantly headlined "Have no illusions about the Brotherhood" - a translation of his piece in Arabic from Al-Masry Al-Youm on 23 August - El Menawy told his readers: "I believe this is a major development in the British vision that I think we should build on."

El Menawy revealed that Burt's article followed local briefings which had already been delivered by John Casson, the British ambassador to Cairo.

According to El Menawy, Casson has been talking about "a new direction in British policy on its dealings with terrorism and its threat, and a new position on Britain's view of the Muslim Brotherhood".

If El Menewy is right, then Burt's remarks have not come out of the blue. They are carefully prepared and should be seen as part of a new British strategy towards Egypt and the Arab world.

Where are the human rights concerns?

In his article for Al Ahram newspaper, Burt claimed that "the British fight against terrorism took place within a solid framework that protects human rights".

However, in his article, he made no mention at all of human rights abuses carried out by the Sisi regime. According to a report released last year by Arabic Network for Human Rights Information, almost 60,000 political prisoners and detainees are incarcerated in Egyptian prisons.

According to the Committee to Protect Journalists in 2016, Egypt ranks as the country with the third-highest number of journalists jailed, behind only Turkey and China. Human Rights Watch says that officers of the Egyptian National Security Agency have a record of routinely torturing and forcibly disappearing suspects with very few consequences.

Burt's failure to address any of these hugely serious human rights issues is significant.

Just as interesting was Burt's decision to link the British domestic battle against Islamist terrorism with the Egyptian war on terror.

Burt suggested that there was not so much as a cigarette paper between Britain's domestic struggle against Islamist terrorists and President Sisi's illegal battle against the Muslim Brotherhood in Egypt.

Burt declared that Britain and Egypt "have fought their wars against terror for over forty years".

Burt suggested that there was not so much as a cigarette paper between Britain's domestic struggle against Islamist terrorists, and Sisi's illegal battle against the Muslim Brotherhood in Egypt

This statement is misleading. Bear in mind that in Britain, the terror threat comes mainly from al-Qaeda and the Islamic State (IS), as well as the racist extremists on the far-right.

These are violent, nihilistic groups that are hostile to democracy and the rule of law, and are wholly committed to violence and wanton destruction.

This is emphatically not the case with the Egyptian Muslim Brotherhood.

A world of difference

As Burt and Casson must know, the Egyptian Muslim Brotherhood has been committed to peaceful political methods for more than four decades, and has remained committed to non-violence ever since the military seizure of power four years ago.

The Foreign Office is well aware that there is all the difference in the world between IS and al-Qaeda and the Muslim Brotherhood. They know very well that the Brotherhood does not promote violence. They understand that dictators like Sisi hate the Brotherhood not because it is violent but because it represents a democratic opposition to dictatorship.

It is worth quoting Burt at some length to demonstrate the new hostility in Britain's tone towards the Muslim Brotherhood:

"We will impose tight surveillance on the Brotherhood's behaviour and their activities including their visa requests, source of funding for charity organisations and their relationships with international organisations. Britain is now one of the few countries around the world that [has] banned, on all levels, any communication with the Brotherhood since 2013.

"Throughout our observation of the Brotherhood's activities around the world, it became completely clear that this movement uses ambiguity to hide their extremist agenda in Egypt. These evasive tactics, used by the organisation and which were observed by those who prepared the 2015 report, still continue to be used in 2017. Now is the time for everyone who defends the Brotherhood in London or in Cairo to put an end to this confusion and ambiguity.

"All of this leads to a question for those who support the Brotherhood: will you ignore the fact that the Muslim Brotherhood has failed in one of today's biggest challenges? Or would you prefer to join Britain and Egypt in condemning this poisonous extremist ideology, wherever it may exist?"

So why is Alistair Burt making these remarks?

I contacted the Foreign Office to ask if Burt's article - and Casson's briefings - indicate a change in British foreign policy towards fighting terrorism and the Brotherhood.

In answer to my questions, an official referred me to the government's response to last year's Parliamentary Foreign Affairs Committee inquiry into political Islam and the Muslim Brotherhood review from last February.

The piece, he added, is "an example of that UK approach which is more proactive than any other Western country".

And Casson's briefings? Based on the same stances.

Let me decode all of this: I believe that Britain has embarked on a new strategy of appeasement towards Arab dictators.

Burt’s remarks in Cairo last week have sent a message to democrats across the Middle East that Britain will not back them.

They have reinforced al-Qaeda's contention that Western claims to support democracy in the region are hypocritical and fake. And they have given enormous reassurance to one of the most brutal dictators in the Middle East as he cracks down on free speech, democracy and the rule of law.

Photo: Alistair Burt speaks during a joint news conference with UAE Minister of State for Foreign Affairs Anwar Gargash (unseen) in Abu Dhabi, in May 2013 (AFP) 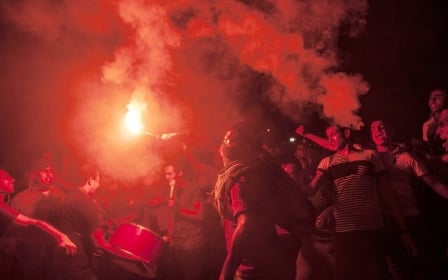 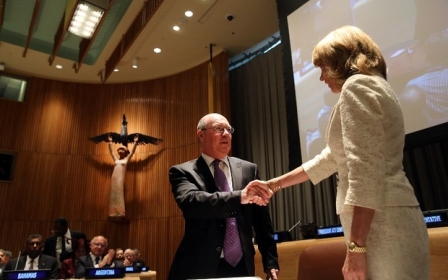