The choice for the Kurdish movement 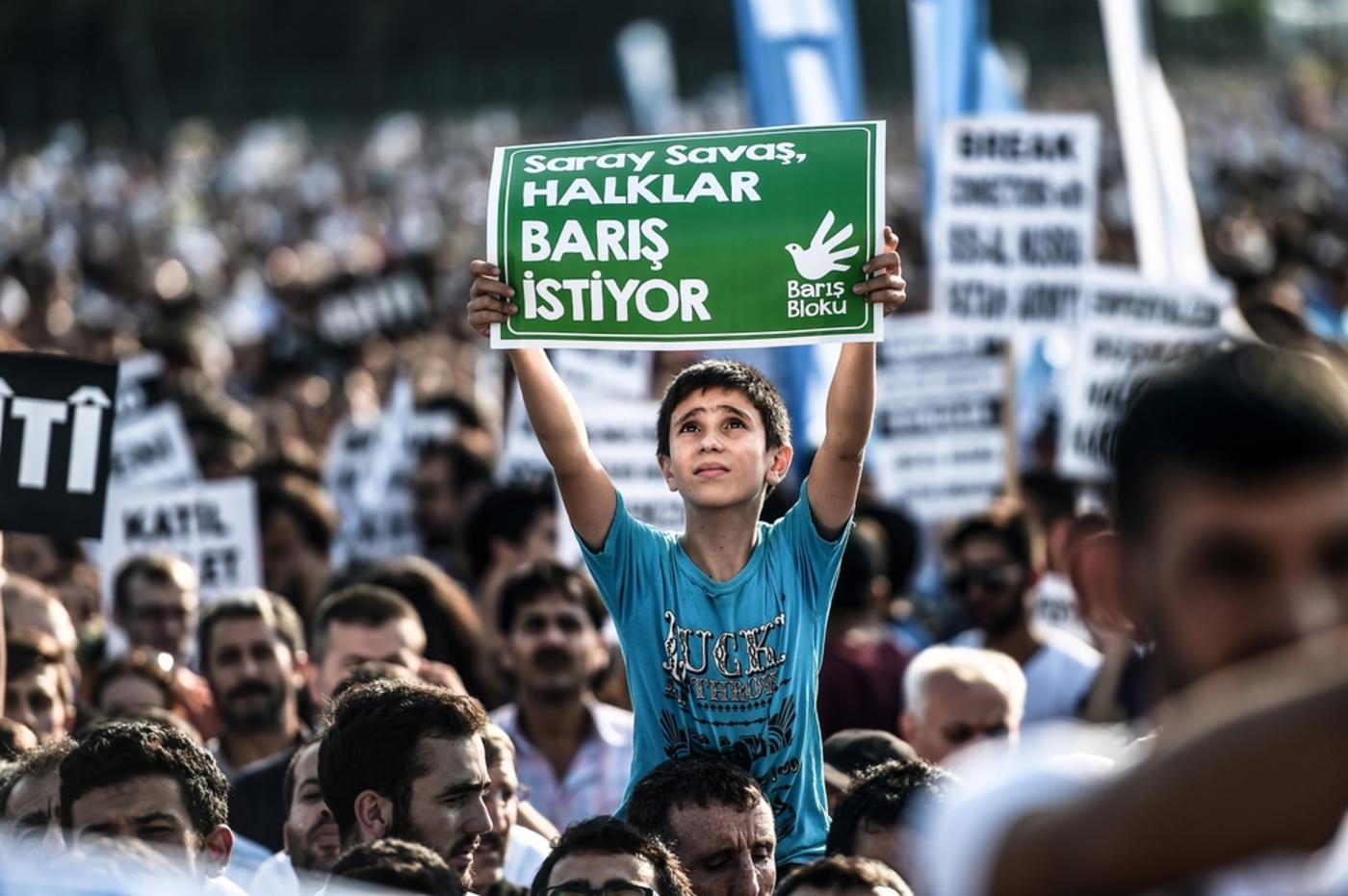 There have been some important milestones in the history of the Kurdish movement.

First, the decision taken in the 1990s to pursue a solution within Turkey instead of aiming to establish a united, independent Kurdistan in Turkey, Iran, Iraq, and Syria, the four parts of greater Kurdistan.

Second, the decision to seek a solution to the Kurdish issue around 2009 through engagement with the civilian government rather than Turkey’s military-led, undemocratic, tutelary regime - this was also the date in which it became apparent that the balance of power in Turkey was decisively turning in favour of civilian government rather than the unaccountable, military-bureaucratic establishment.

Third, the decision to pursue the advancement of Kurdish rights through political means rather than the armed struggle, which found its most obvious expression in the letter of Kurdistan Worker Party’s (PKK) leader Abdullah Ocalan during the Newroz celebration of 21 March 2013.

Fourth, the goal of creating a political movement that can reach beyond the Kurds and create common ground with left-liberal non-Kurdish segment of society, are a few such positive turning points to name.

All of these above decisions have been in alignment with the spirit of the times and the current of history; hence they have only strengthened the Kurdish movement. With these decisions, the movement made inroads into new constituencies, ameliorated its relations with the West, and began to be treated more as a legitimate and responsible force. In a sense, the more the Kurdish movement behaved responsibly, improved its relations with Turkey, and pursued a peaceful path to the resolution of the Kurdish issue, the more it achieved acceptance within Turkey and legitimacy internationally, and  the more it became a force to be reckoned with.

This, nevertheless, is not the whole story. There is another narrative and political history of the Kurdish movement as well. In 2004, at a time when Turkey and the EU were engaged in serious negotiations and when one reform package after another made its way to the parliament, the PKK terminated the ceasefire, which was put in place when Abdullah Ocalan was captured in 1999, and reinitiated its fight against Turkey.

This move benefited none other than the residue of the Kemalist regime with its military and civilian components. The low-intensity war, as described by the official discourse, between the PKK and Turkey provided a lifeline and amenable ground for these unaccountable and dirty elements to survive and hope to come back again to prominence.

In 2007, as the term of the incumbent president Ahmet Nejdet Sezer came to an end, an arm-twisting struggle broke out between the AK Party government and the military over the selection of Turkey’s next president, with the military wanting to stave off the presidency of Abdullah Gul - citing his wife’s headscarf as legitimate grounds for their objection - which led the AK Party to call for an early election to settle the dispute.

The party won a landslide victory over these regressive forces, who, beside other things, preferred the continuation of the old assimilationist policy and the adoption of a heavy-handed approach towards the Kurds. Nevertheless, the PKK resorted to and increased the level of violence after the election.

In 2009, Turkey and the PKK engaged in secret talks to settle the issue. The talks took place in the Norwegian capital Oslo, hence the process has been called the “Oslo Process”. This was the first time the state and the PKK engaged each other directly to find a formula for solution. Unfortunately, the PKK’s Silvan attack on 14 July 2011, which culminated in the death of 13 soldiers, derailed the process.

Violence once again had become the order of the day. In fact, 2012 was the bloodiest year in the fight between the PKK and Turkey since Abdullah Ocalan’s capture in 1999. Emboldened by the revolutions across the Arab world, the PKK believed that it could create a similar momentum and called on people to initiate a “People’s Revolutionary War”, but to no avail.  The ongoing peace process, which has experienced serious setbacks, was built on these previous failures and acquired a new structure.

From insurgency to political force

During times of conflicts and decisions to reinitiate war, the PKK or the Kurdish movement at large has found none other than shady allies. Its prospect for political expansion was severely limited. It was treated more as a security challenge rather than a progressive political force to be reckoned with. In contrast, during the peace process(es), the movement has tapped into new constituencies, formed relationships with the West, and come to be seen as a major political power destined to reshape Turkey’s future.

What these two different pictures illustrate is that the political fortune of the Kurdish movement in Turkey is very much contingent upon its ability to transform itself from an armed insurgency into a civilian-political force, and to align its demands with the spirit of the times.

The Kurdish movement prizes presenting itself as a united front, despite its various components. In terms of converging around a common position in dealing with Turkey, this has long been the case. The movement has proved to be quite skilful in adopting an integrated strategy.

Nevertheless, when one asks whose interests have been served more by the position adopted, the picture then starts to change. This is particularly the case when it comes to asking who made the decision to reinitiate the conflict.

The movement started as an armed insurgency, therefore traditionally the one who could pull the trigger had primacy over the one who was supposed to do the less animating job of politics. The relative decrease in the armed conflict over the last decade provided an amenable ground for the civilian and political wing to assert itself more vigorously.

With the decision that the Kurdish movement should strive to reach beyond the Kurdish constituency and establish itself as a Turkey-wide left-wing party, the political wing of the movement received a boost. There has been significant domestic and international support for this project.

Yet the recent outbreak of the violence blurred this picture.  It limits the reach of Kurdish politics and tarnishes its image internationally. The more the PKK resorts to violence, the more it becomes a liability, rather than a cause, for the actors that are willing to engage with it. In other words, the more the PKK swims against the tide of the times, the more it will face isolation in the context of Turkey and the international sphere.

In the 1990s, it was the state that was swimming against the tide of the times. When the waves of democracy and democratisation were hitting different parts of the world, Turkey was undergoing a completely different experience. The state had become more ruthless in suppressing the democratic demands of its citizens, unaccountable and opaque. The state had come to epitomise everything that the zeitgeist was rejecting. Such a driving of the wedge between the state, society and the zeitgeist severely diminished the legitimacy of the state in the eyes of its citizens.

The Kurdish movement back then had primarily two goals: first, the political demands of the movement, which ranged from secessionist aspirations to the advancement of democratic rights; second, the movement wanted to be recognised as the main actor with whom the state should engage to negotiate these demands. The belief that the state was not ready to meet either of them provided the justification for the use of violence as a means to attain these political ends.

Yet the times and circumstances have dramatically changed since then. First, there are no items that cannot be politically negotiated vis a vis the Kurdish issue, including the issue of devolution of power. Second, from the Oslo process to the recent peace process, the government has showed that it is willing to recognise the PKK’s political agency and status as a formidable political actor. Hence, two of these demands are attainable without resort to arms. These nullify the cause for the PKK to utilise weapons to attain its stated goals within Turkey. PKK’s insistence on the utilisation of arms as a means will only sow the seeds of its own future crisis.

To be clearer, it was the PKK, instead of these parties, that politicised this social base that supported the pro-Kurdish political parties. This gave the upper hand to the PKK in its dealings with the political wing. But this picture has partially, if not dramatically, changed in the last general election that took place on 7 June 2015. Instead of hovering around 6-6.5 percent of the votes that the pro-Kurdish parties traditionally received, the HDP gained over 13 percent of the votes.

Though aspirations and grievances related to the Kurdish issue played an important role in the increase of these votes, a significant chunk of these new voters, nevertheless, were not politicised by the PKK. Civilian Kurdish politics proved that it could shine in an atmosphere free from violence. This development should inform the way forward for the Kurdish movement in Turkey.

It is through civilian politics rather than the armed struggle that it can pursue a significant political role and an expansionist policy at the constituency level. Otherwise, the PKK’s resort to violence will jeopardise the Kurds’ recent gains both at the ballot box in Turkey and on the battlefield in Syria.

-Galip Dalay works as a research director at Al Sharq Forum and senior associate fellow on Turkey and Kurdish Affairs at Al Jazeera Center for Studies.

Photo: A boy holds a sign reading in Turkish "The palace wants war, people want peace" during a peace gathering in Istanbul on August 9, 2015. (AFP) PKK
Who caused the collapse of the Turkey-PKK ceasefire? The female guerilla fighters of the PKK