Could Hassan Rouhani be the biggest loser of the Iran protests?

Mahan Abedin
The latest protests in Iran may be small in scale but their effect will be far-reaching. The biggest victim may prove to be Hassan Rouhani 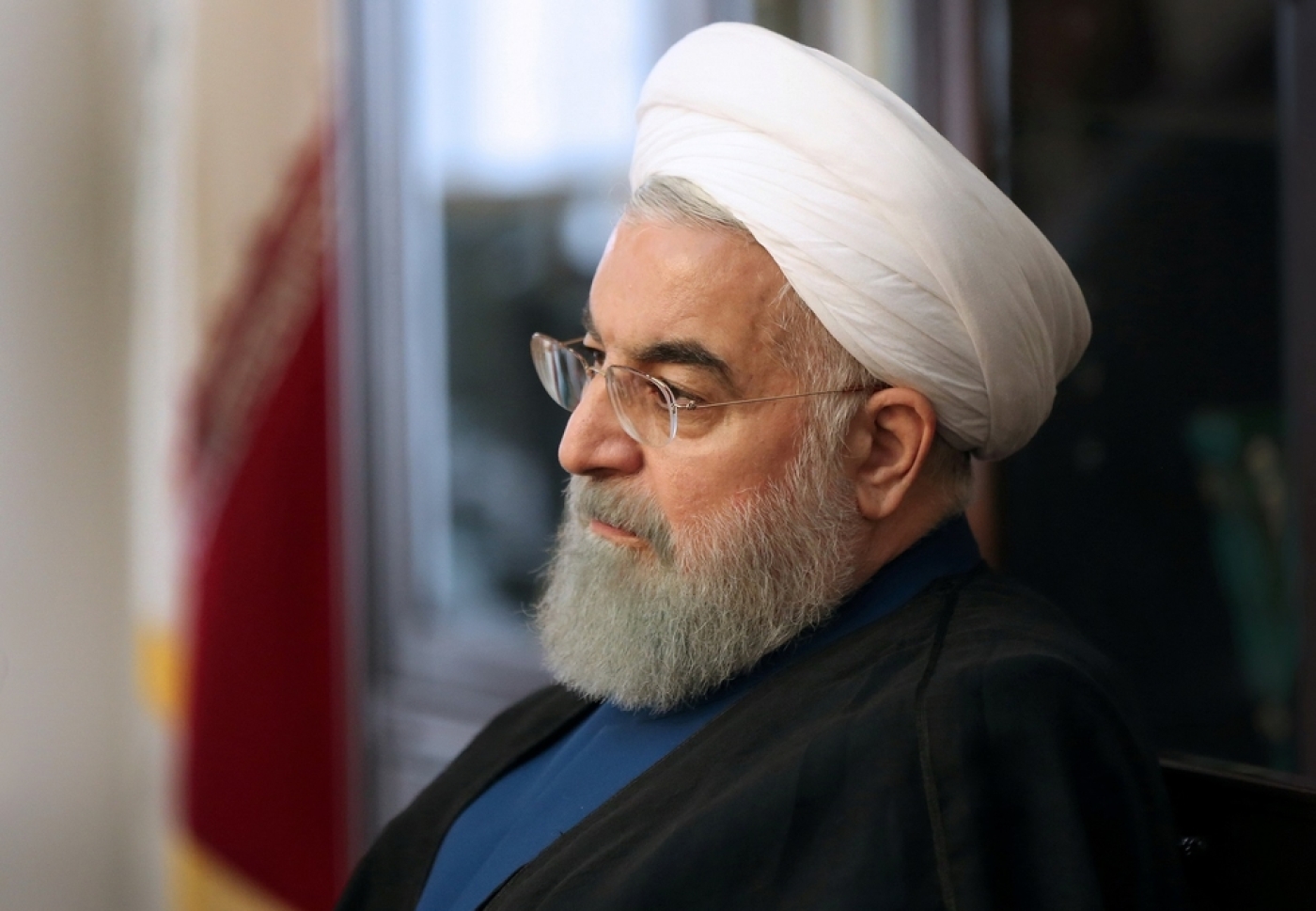 A week of protests and riots in Iran's provincial towns caught most observers by surprise. But there are indications that the Iranian authorities were anticipating unrest weeks before the first protest broke out in Mashhad last Thursday.

Sources have told Middle East Eye that security forces were deployed in the areas around Tehran University (where demonstrations often start) at least a week before the protest in Mashhad.

Moreover, the authorities would have been forewarned by months of small-scale sit-ins and protests sparked by unpaid wages, depleting pension funds and the collapse of dubious credit institutions.

Neither unexpected nor spontaneous

In short, the protests which erupted late last week were neither unexpected nor spontaneous. The context is years, and in some cases decades, of economic mismanagement, corruption and the shrinking of the welfare state.

Although the latest protests are much smaller in scale than the 2009 protests (which unfolded in the wake of a disputed election), their effect could prove to be deeper.

In the immediate term, the prospect of years of intermittent unrest gives ammunition to President Hassan Rouhani's enemies to challenge his neoliberal economic policies.

At a deeper level, the shock of the latest protests (and potentially more to come in the months and years ahead) is likely to produce greater systemic cohesion and may herald the erosion of factional boundaries.

The sum effect of these developments will in turn influence the leadership succession debate. Indeed, we can already eliminate Rouhani as a potentially viable candidate to succeed Khamenei as the Valiyeh Faqih or supreme leader.

Rouhani and his allies wasted little time in attributing the initial protest in Mashhad to their principlist and conservative rivals. On the face of it, the allegation is credible inasmuch as Mashhad is a conservative stronghold and the home of Ebrahim Raisi, the head of the Astan Quds Razavi, a vast and autonomous charitable-business empire, and Rouhani's main rival in last May's presidential elections.

But the fact is we know very little about the precise set of circumstances which sparked the initial protest and the subsequent unrest. By extension, it is too early to speak with certainty on the precise demographic composition of the protesters and their true motives.

These protests have been described as working class and driven by provincial grievances at central government neglect.

This analysis is driven largely by comparisons to the last major protests back in 2009, which was essentially a middle-class uprising led by established movements and leaders.

While the latest protests appear to be leaderless, disorganised and somewhat confused (judging by the conflicting slogans of protesters), it is still far too early to predict what shape it can take, and what type of leadership it will produce, should it persist.

We cannot definitively attribute the spark of the protests to the conservatives, but nonetheless it is undeniable that the government's opponents created a favourable climate for protests and unrest through five years of relentless media-based incitement against the Rouhani administration.

On the other hand, Rouhani himself cannot be absolved of blame. He ran a polarising election campaign back in May where he set out to embellish the divide between the centrist-reformist coalition and their conservative/principlist opponents.

In terms of campaign promises and subsequent performance, it is an understatement that Rouhani over-promised and under-delivered. By inflating expectations, and subsequently failing to deliver, and in some cases reneging altogether on campaign promises - by for instance appointing conservatives to his cabinet – Rouhani created despair and disarray amongst his constituency.

In keeping with his lack of charisma Rouhani failed to take the lead in addressing the nation in a timely fashion and easing acute national concerns about the ferocity and radicalism of the protestors. Indeed, it took him three days before he publicly spoke about the unrest.

Rouhani will likely be the biggest loser of the protests. The shock of the past week's events is set to take the wind out of the government's sails and make it more vulnerable to establishment lobbying and pressure.

In the all-important economic sphere, the government may be forced to blunt the hard edges of its neoliberal and austerity-driven policies in order to accommodate the grievances of the protesters and specifically address provincial-level demands centred on under-development and inadequate welfare provision.

In observational terms, there have been two striking features about the nationwide protests. First, they are unprecedented both in terms of ferocity – with reports of rioters trying to storm police stations and military bases  - and their radicalism, as demonstrated by slogans calling for the overthrow of the establishment.

Second, the protesters have completely ignored the Green Movement and its leaders. Indeed, their rejection of the established political community as a whole is encapsulated by the slogan of "reformists, principlists, the game is over!".

Not surprisingly, the reformists have disavowed the latest protests. Former president Mohammad Khatami (who is widely seen as the spiritual leader of the reform movement) condemned the protesters in the strongest terms, as did one of the main reformist organisations, namely the Association of Combatant Clerics.

But some reformist ideologues have gone even further by calling for a ruthless crackdown. Abbas Abdi, a leading reformist ideologue and strategist, and one of the leaders of the student group which stormed the US embassy in Tehran in late 1979, has called on Islamic Republic loyalists to seek inspiration from the example of the 1980s when supporters of the "revolution" confronted the Mojahedin-e-Khalq group, independent of the actions of the formal security forces.

This is a call to arms and a cry for mobilisation which clearly anticipates prolonged unrest and instability. It is also based on the assumption that despite the economic mismanagement and widespread corruption, in addition to revolutionary fatigue, the Islamic Republic nonetheless has sufficient ideological cohesion to withstand repeated uprisings.

In keeping with their hard-left background, and their perennial struggle with the establishment notwithstanding, the leading reformist ideologues see themselves as the vanguard of the revolution and the true owners of the Islamic Republic.

The threat of internal unrest, exacerbated by a hostile external environment, is likely to erode factional boundaries and produce greater consensus on socio-economic, security and even cultural policies.

Finally, the protests are likely to influence the debate on the suitable successor to Ayatollah Khamenei as the Valiyeh Faqih and leader of the Islamic Republic. While the Assembly of Experts is the formal body tasked with selecting a new leader, in reality all the key institutions of the state are involved in the debate.

This includes the Islamic Revolutionary Guards Corps (IRGC) which both in ideological and operational terms is the most proximate institution to the leadership.

Even before the protests, the tortuous consultations on the succession issue were taking place against a backdrop of economic discontent, public apathy and a hostile external environment.

While few suitable candidates have been formally identified, initially speculation centred on Ebrahim Raisi as a potential contender. But Raisi's poor performance in last May's presidential elections has effectively ruled him out.

Whereas Rouhani has never been clearly identified as a potential successor, nonetheless many believe he aspires to the position, if not in an exclusive capacity but possibly as part of a leadership "council". The latest protests, coupled with widespread disenchantment with Rouhani, effectively rule him out as well.

Persistent unrest may force key institutions, notably the IRGC, to radically rethink the entire succession process. The office of Velayat-e-Faqih (Rule of the Jurisconsult) is already beset by a legitimacy crisis.

This crisis is likely to escalate once Ayatollah Khamenei departs the arena, especially as he is the sole surviving member of the late Ayatollah Khomeini's inner circle, and there is no one who can match his revolutionary credentials and charisma.

Any modification to the office of Velayat-e-Faqih requires changes to the constitution and this can only happen if there is sufficient political consensus, meaning factional unity. Instability and intensifying external threats will generate this consensus.

Photo: By inflating expectations, and subsequently failing to deliver, and in some cases reneging altogether on campaign promises, Rouhani created despair and disarray among his constituency (Reuters)