Makram Rabah
The Lebanese PM will be forced to explain how Hezbollah launched a military campaign against Syrian rebels inside the country. Given Trump's anti-Iran stance, Hariri may need some back up 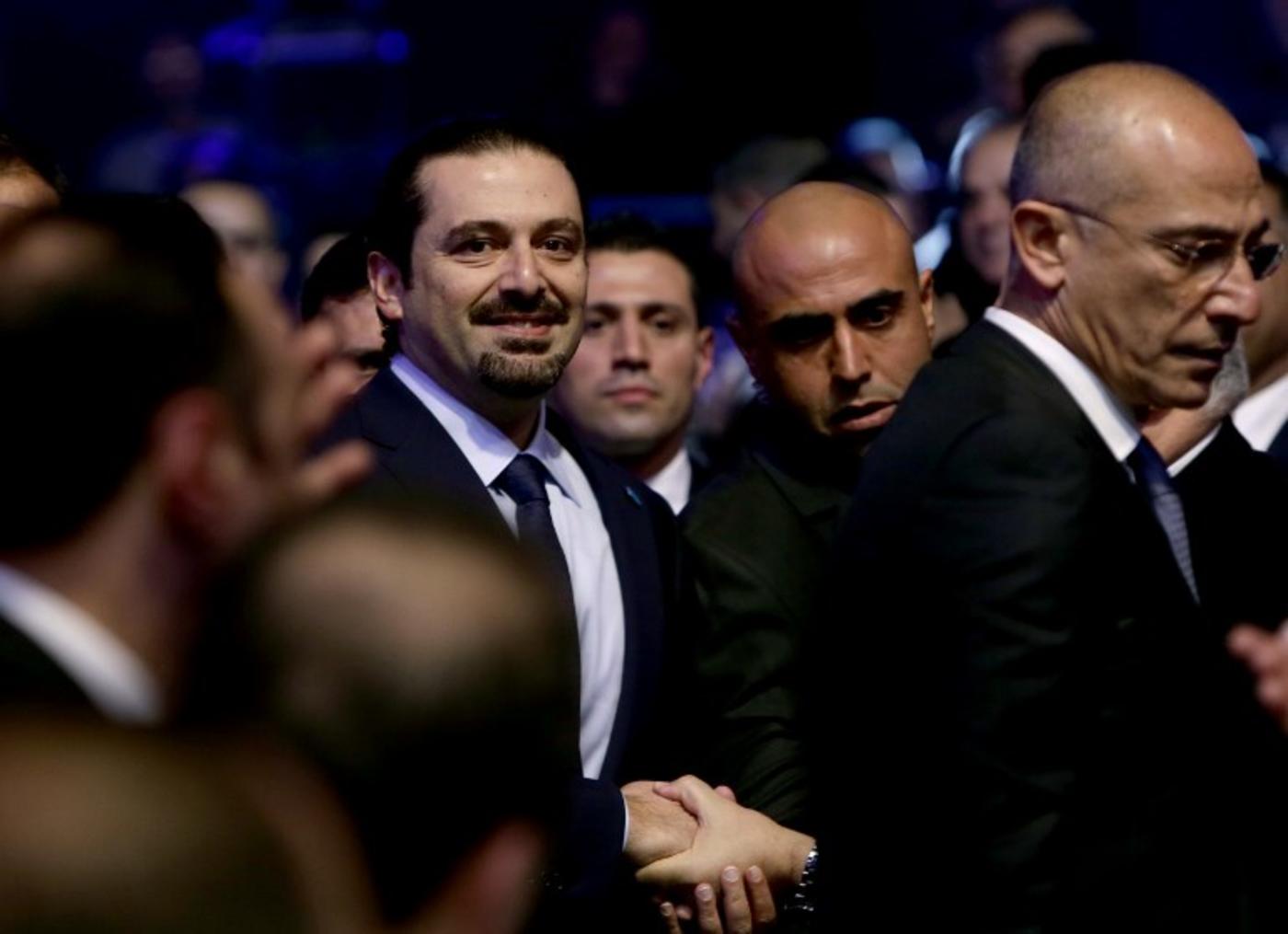 For many Lebanese statesmen, a high-profile international visit, especially to Washington, DC is a cause for bragging rights, a chance to claim they’ve seen the inside of the White House and shaken the hand of the most powerful politician in the world.

It is with this mindset perhaps that Lebanese Prime Minister Saad Hariri and his extended delegation have landed in Washington on Tuesday, scheduled to meet President Donald Trump and other US officials to discuss several items, chief among them, the ever-inflating refugee crisis and the fight against terrorism.

This visit, mundane as it might appear, will certainly not be smooth for Hariri who will have to answer uneasy questions about his government’s weak stance on Hezbollah and the group’s highjacking of the Lebanese state.

A few days before Hariri left for DC, Hezbollah launched a so-called war of liberation against what it deems to be terrorist groups bunkered down in the eastern town of Arsal. By unilaterally declaring war, the campaign deals a severe blow to Lebanon’s sovereignty.

It has also, once again, humiliated the Lebanese government and its army, which is not participating in the offensive, but only coordinating relief efforts to avoid a potential humanitarian crisis as Syrian refugees displaced from the Arsali outback flee.

In order to explain to Trump how it is that Hezbollah - the Iranian-backed US designated terror group fighting for Assad in the Syrian war - has launched its own operation in the country he controls, Hariri will likely use the same justification he used when he changed his stance against the group to elect Michel Aoun, Hezbollah’s main Christian ally, as president. He's protecting "Lebanon and the state and the people”.

This pretext, however, will fail to impress the hawkish Trump who, unlike his predecessor, views Iran as an equal if not more menacing threat than terrorist groups like Islamic State.

Since 2005, when Saad was forced to take the helm of a coalition of anti-Syrian parties, known as March 14, after his father was assassinated, Hariri’s adventure in Lebanese politics has been nothing short of a roller-coaster ride.

Despite March 14’s electoral successes, Hariri had to wait until 2009 to be named premier  - and only as a result of the Doha Agreement, the deal which ended a round of violence between the Lebanese government and Hezbollah and their allies.

Consequently, Hariri was named to lead a national unity government which included all factions as well as Hezbollah who agreed to bury the hatchet - or so it seemed.

On his last visit to Washington, DC in 2011, then as prime minister, Hariri was leaving the Oval Office when he learned that Hezbollah had imploded his government, leaving Hariri as a caretaker prime minister until he was replaced by Najib Mikati, an ally of Hezbollah and the Syrian regime, three months later.

Following this humiliation, Hariri went into exile. He faced security threats and, perhaps more importantly, his financial empire in Saudi Arabia was dealt a severe blow, preventing him from financing a successful opposition campaign against his local Lebanese rivals.

Hariri’s recent return last November to the Grand Serail – headquarters of the Lebanese premier - came as part of a startling deal he struck with Aoun, including an agreement dividing the government and its resources between them and ensuring that Hariri’s tenure would go smoothly.

The major hitch in this Faustian deal, however, was that Hariri was forced to work with Aoun’s ally Hezbollah. Ill sentiments between the group and Hariri and his Saudi allies was, unsurprisingly, mutual.

The Aoun-Hariri alliance, while ostensibly empowering the latter, also exposed him to major criticism both locally and internationally. Among his traditional supporters, Hariri has relinquished his father’s legacy by bringing Aoun to power, a concession which will only strengthen Hezbollah’s grasp over the state.

Despite welcoming Aoun’s election, Saudi Arabia clearly had reservations over the deal and, since he came to power, has not provided financial support to the state or the army, as it has done on numerous occasions in the past.

But perhaps most importantly, Hariri, according to many reports, lost favour with senior Saudi leaders who were disappointed by his earlier political performance and by his repeated failure to stand up to Hezbollah and Iran.

His situation was further complicated when Hariri’s Saudi construction firm Saudi Oger was accused of financial corruption, a claim followed by intentional delays by the Saudi government to settle Oger’s bills, which drove the company to the brink of bankruptcy.

While Hariri is still received in Saudi Arabia as a long lost son, his collusion with Hezbollah, whether he likes it or not, places him in a very volatile position which will only worsen with time.

With these burdens on his shoulders, Hariri’s trip to the US may prove more turbulent than expected. While he has unleashed a barrage of criticism against Hezbollah, condemning the battle in Arsal as part of an Iranian agenda, Hariri himself has deliberately kept these issues off the table of his cabinet and has refrained from asking his ally President Aoun to take a stand against the continued breach of state sovereignty.

Naturally, Hariri wants to avoid these thorny matters which are certain to break up this marriage of convenience with Aoun and consequently thwart several government projects in the works, many of which have been accused either of involving monopolies or corruption.

Once Hariri gets his photo op with Trump and the cameras are gone, neither of the two leaders will be able to avoid the elephant in the room. Nor will Trump fail to mention that, despite continued American military assistance to Lebanon, the state has failed to enforce financial sanctions against Hezbollah and, instead, has allowed the group to use the government as a cover to carry out its military scheme in the east.

Maybe Obama would have accepted a claim that this was out of the Lebanese government’s hands. Trump won’t.

If Hariri and his allies can agree to pass unpopular and unsound taxes and projects that are expected to fail and waste millions of taxpayers’ money, then it is only natural that the prime minister of Lebanon and the president of the republic step forward to protect what remains of Lebanon's shattered dignity.

Consequently, if Hariri and his team don’t have a contingency plan for any of the scenarios above, then their trip to the White House will certainly not bode well, nor will it make Hariri a return visitor to the Oval Office, a reality which would further ostracise Lebanon from the international community and further push it into the Iranian sphere.

Photo: Saad Hariri arrives to deliver a speech during a gathering to mark the tenth anniversary of the assassination of his father and former prime minister Rafiq Hariri, on 14 February 2015, at the Biel Convention Centre in downtown Beirut (AFP) 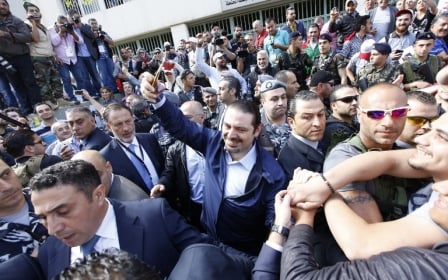