Sameh Habeeb
Israel is apparently turning to the 'anti-Semitism' taunt to fend off the growing Boycott, Divestment and Sanctions movement 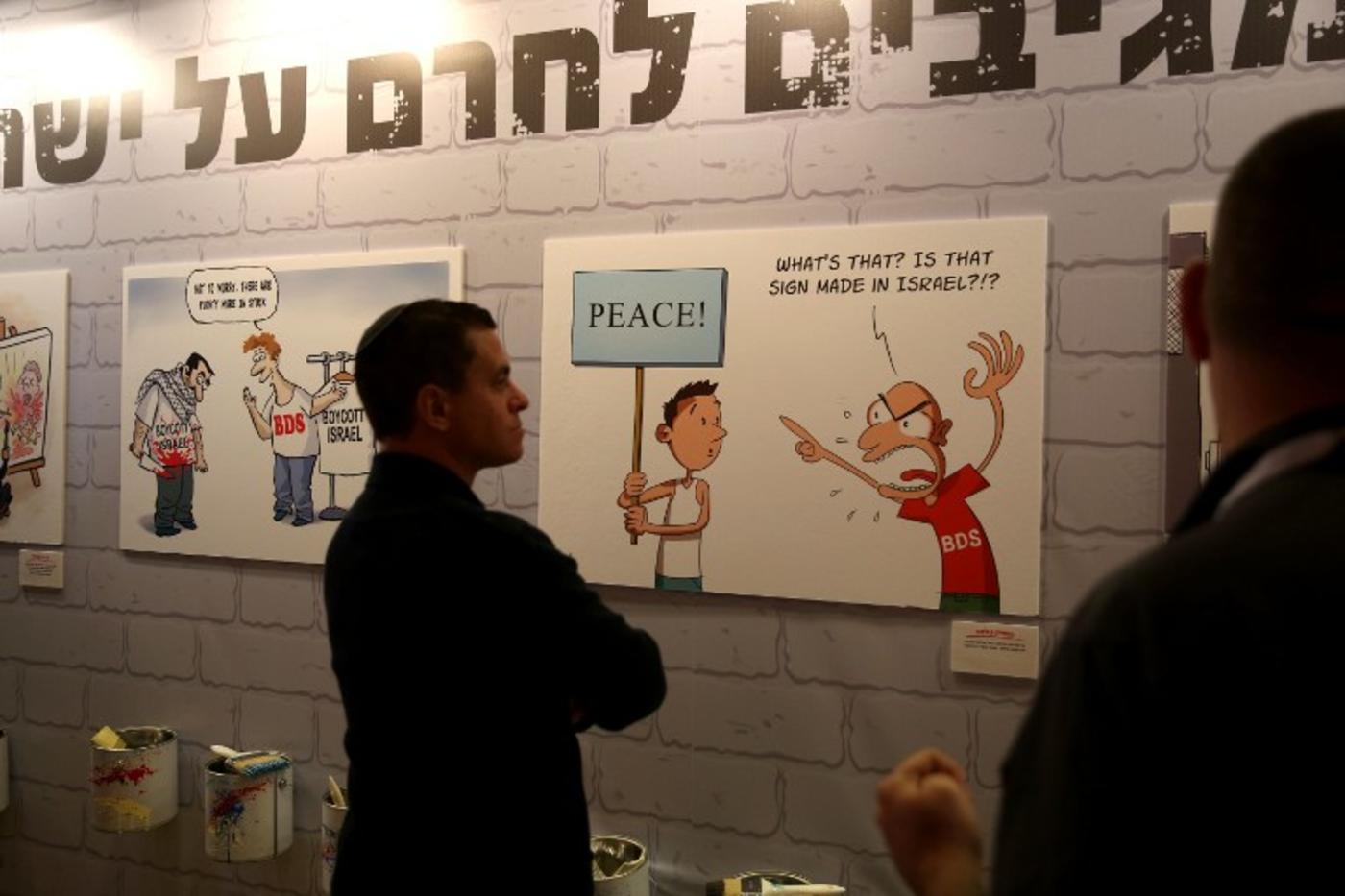 On the 28 March, Israeli mainstream newspaper Yedioth Ahronoth held its first conference targeting the Boycott, Divestment and Sanctions (BDS) movement, bringing together Israeli and American experts to craft a strategy against the rapidly growing worldwide boycott movement. The conference in occupied Jerusalem featured the Israeli president and senior right-wing government ministers as well as radical members of the Knesset, or parliament.

Some of the recommendations given by speakers show how Israel is incapable of halting the BDS train. Yisrael Katz, minister of intelligence and transport, suggested taking aim at the BDS leadership using the policy of "targeted civil eliminations," which means killing them via “targeted assassinations,” as translated from Hebrew by Israeli left-wing news website 972mag.com.

Meanwhile the leader of the religious party Shas, Interior Minister Aryeh Deri, suggested revoking the citizenship of BDS Palestinian activists who live in Israel and hold Israeli citizenship, giving the example of one of the BDS movement's co-founders, Omar Barghouti.

Another anti-BDS conference is planned for later this month in Los Angeles, with the Zionist godfather of anti-BDS propaganda, Alan Dershowitz, as a keynote speaker.

These conferences are part of the Israeli spin machine to improve its reputation. Israel's image in the world, particularly in the West, has severely deteriorated. The rise of social media coupled with Israel's flagrant violations of Palestinian human rights has played a central role in more people seeing Israel in a negative light. The BDS movement has risen to prominence in the same period, which has also seen Israel's three consecutive wars and deadly siege on Gaza.

These factors doubtless contributed to the change in Israel's image in the West and other parts of the world.

The rise of the BDS as a non-violent mean of resistance by Palestinians and their friends since 2005 poses a great risk to Israel. For many decades, the country worked hard to market itself as the "oasis" or "sole" democracy in the region; but winds do not blow as the vessels wish. The emergence of BDS was a blow to Israel's image, which has become associated with apartheid and racism rather than democracy and equality.

The boycott movement targets Israel on the economic, academic and cultural levels and has established Israel in the minds of many nations as “the new apartheid South Africa”. Such a perception is dangerous for a country that sees itself as a victim that requires constant sympathy from the world, especially the West. Israeli propaganda has argued that the nation is living in a hostile environment of Arab nations; thus changing the world's view to it being an apartheid state is unquestionably problematic.

Israeli's Standwithus propaganda and PR campaign once described BDS as an existential threat to the country. In a propaganda clip it claimed that, "since Israel's rebirth in 1948, it has survived multiple wars but now, in addition to the physical threats to Israel, the Jewish nation faces a sophisticated global PR campaign to undermine its very right to exist in the war of words and images. Anti-Israel groups paint the state as racist, colonialist and often deserving destruction. Israel is accused of atrocities and Palestinians are cast as pure victims of Israeli aggression."

Over the past decade, BDS has managed to besiege Israel worldwide, forcing or encouraging companies and businesses to leave Israel or refrain from increasing their investments there, especially in the illegal settlements, with businesses started to recognise that the constant activism can affect their reputation and brand names. Many companies have started to see BDS as a threat to their financial growth in addition to hurting the public view of their ethics, which are part of their "Corporate Social Responsibility".

Co-operative Group in the UK has ended its trade with goods coming from Israeli settlements, while the Israeli Ahava beautification company has closed its branch in London.

Conglomerate G4S security company has recently announced a halt to many of its activities in Israel, while a major Quaker church in the US has joined a long list of BDS endorsers by divesting its shares in the Caterpillar company due to its sales to Israel of bulldozers, which are often used to destroy Palestinian houses.

Another breakthrough for BDS has been the endorsement of celebrities in the fields of arts, culture, film industry and other domains. BDS momentum has grown and become more effective as many student unions in universities let alone high-ranking academics in Europe and elsewhere have adopted it.

Fear of at the highest levels

Many Israeli leaders have expressed concerns about the BDS, such as former Israeli prime minister and ex-leader of Israel's Labour party Ehud Barak, who admitted in January 2015 that the boycott movement was developing and Israel was incapable of fighting it. Israel is particularly concerned if the calls for boycott come from Europe, a traditional ally.

"Gradual processes of Israel’s delegitimization are occurring below the surface," Barak said in interview with Haaretz. "The BDS movement is developing ... As long as those voices against Israel came from Eritrea or Mauritania, fine; when they start to come from Scandinavia and Britain, it’s a serious problem."

During his recent visit to South Africa, former Israeli president Shimon Peres described the BDS movement and those who adopt it as ill-informed, saying: "Scholars who support this should go back to school.”

Peres has previously described the BDS in a propaganda clip by saying: "Unfortunately the BDS [has] now joined the camp of hate. The camp of misunderstanding. I call everyone to join us, to stand up against BDS, which became an unfortunate negative appearance in the Middle East. We have to stop the boycott. Boycotts don't serve peace. Only hope serves peace. Join us."

Deceptively, the statements and positions of Israeli politicians have long been translated into action. Many campaigns were launched over the past few years to "defeat" BDS  and show it as a racist and discriminatory movement, yet the momentum of the movement is still increasing.

Anti-Semitism as a tool

With Israel out of effective choices to crush BDS, it has apparently resorted to using the flag of anti-Semitism in the hope it will deter those campaigning for the movement and those who boycott Israel. The rhetoric that BDS is anti-Semitic started to appear as the BDS grew.

Although the goals of BDS seem in line with international law, Israel is promoting unfounded claims against the movement to discredit it.

For example, the goals of BDS are "ending its [Israel's] occupation and colonization of all Arab lands occupied in June 1967 and dismantling the [West Bank separation] Wall; recognizing the fundamental rights of the Arab-Palestinian citizens of Israel to full equality; and respecting, protecting and promoting the rights of Palestinian refugees to return to their homes and properties as stipulated in UN Resolution 194."

The 5th Global Forum for Combating Antisemitism held in Jerusalem in 2015 provided an action plan against the BDS proposing that Israel must go on the offensive. The plan proposes to "emphasize the Jewish consensus that BDS is antisemitic" and states the "Need to address the narratives of the BDS movement". It also suggests that pro-Israel activists "reassert the legitimacy of Israel’s founding as a state for the Jewish people. Expose connections between the BDS movement and antisemitism. In Europe, labeling someone as antisemitic isn’t always effective."

The outcome of the action plan was used before where anti-Semitism became a tool to attack critics and sometimes ruin their careers and reputations. Ideally, one can claim that anti-Semitism for Israel has become the "Flak" factor of Chomsky-Herman's propaganda model, that is, using negative responses to media statements and the like in an effort to discredit opponents - organizations or individuals - and damage their reputations.

Criticism of Israel is not antisemitism

Accusing Israel's critics of anti-Semitism has become a trend to silence those who dare discuss Israeli human rights violations in occupied Palestine.

Former Pink Floyd member Roger Waters was accused of being an anti-Semite, an accusation he absolutely denied. He argued in an interview with the Telegraph: "It is not ... true that I am an anti-Semite or that I am against the Israeli people. I am neither of those. I am a critic of the policies of this government of Israel. In fact, a significant minority of the Israeli people, either on religious or on humanitarian grounds, shares my view of the Israeli government’s ill-advised policies.

Earlier this year, Swedish Foreign Minister Margot Wallstrom was accused of anti-Semitism for calling an investigation on the extrajudicial killings of Palestinians in recent months. Although her statements were critical of Israel and its policies, she was regarded in some quarters as an anti-Semite although she did not make any anti-Jewish remarks. She simply criticized Israel.

Palestinian Foreign Minister Riyad al-Maliki was accused of anti-Semitism during a speech he made at the UN. Maliki came under fire for saying: “I call on all the countries to boycott settlements and to boycott the products of settlements and to warn of the possibility of imposing economic and commercial sanctions on the occupying power in accordance with the guidelines on businesses and human rights.”

Although Maliki's words focused on Israeli settlements, which are illegal by international law, Israel's ambassador to the UN accused him of speaking “pure anti-Semitism".

Former UN secretary-general Kofi Annan has previously offered an illustration on antisemitism when he made it clear that criticizing Israel is not anti-Semitic. He said: "In some cases, anti-Semitism appears to be a by-product of the Israel-Palestine conflict, particularly with the escalation of hostilities in the past several years. Criticism of Israeli policies is one thing. But it is quite another when such critiques take the form of attacks, physical or verbal, on Jewish individuals and the symbols of their heritage and faith."

Despite these scholarly definitions and the clear difference between criticizing Israel and anti-Semitism, pro-Israeli organisations and the Israeli leadership are employing the accustion of anti-Semitism to silence critics.

Many journalists, activitists and human rights campaigners are being regarded as, or accused of being, anti-Semites for calling for an end to the occupation or the dismantling of illegal settlements and so forth. The use of "anti-Semitism" by Israel as a weapon against those who oppose its policies will not achieve the goals that Israel is seeking. The only way for Israel to avoid further boycotts is to abide by international laws and end the occupation - and end any form of religious or ethnic discrimination practised in the occupied territories.

Photo: People look at caricatures of Israeli artists against the Palestinian-led Boycott, Divestment and Sanctions (BDS) movement displayed during the Ynet and Yedioth Ahronoth's anti-BDS conference on March 28, 2016, in Jerusalem (AFP). 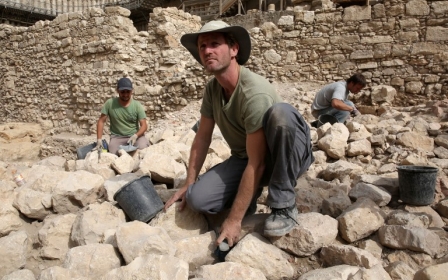 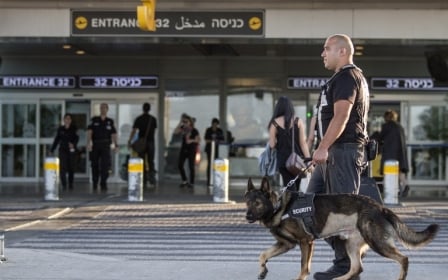 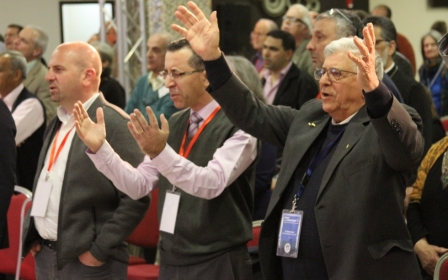