Death of Soleimani: A huge blow to Hezbollah The death of Qassem Soleimani, who headed the Islamic Revolutionary Guard Corps’ Quds Force, in a US drone strike in Baghdad this month represents a significant loss for Lebanon’s Hezbollah.

A Lebanese journalist who met Soleimani on several occasions described the 62-year-old officer as “discreet and courteous with a commanding personality” - a symbol of Iran’s power abroad. A trusted associate of Iranian Supreme Leader Ayatollah Ali Khamenei, Soleimani, who joined the Revolutionary Guard at 22, had commanded its elite Quds Force since 1998.

For two decades, he tirelessly endeavoured to expand Iran’s clout in the Middle East, supporting groups and parties that, in time, would become major regional players. These included Hezbollah in Lebanon, Islamic Jihad in Palestine, the Popular Mobilisation Forces in Iraq, and the Houthis in Yemen.

Soleimani was one of Hezbollah’s most valuable allies, having what one official described as a “very unique”, close friendship with leader Hassan Nasrallah. A widely circulated image on the internet shows the two men posing with Khamenei.

The Hezbollah source told MEE that Soleimani was the key architect of the strategy to defeat the Islamic State (IS) in Iraq and Syria. In 2013, he helped the Lebanese Shia party develop its strategic intervention alongside pro-Assad forces, tipping the balance of power in favour of Damascus and contributing to the defeat of IS, which controlled half of Syria and a third of Iraq at the time.

Thanks to Soleimani’s close relationship with longtime Hezbollah leader Imad Mughniyeh, assassinated in Damascus in February 2008, the group gained access to Iran’s full military capabilities. The Lebanese party’s increased fighting strength allowed Hezbollah to successfully drive out the Israeli army in 2000 and to withstand Israeli attacks during the 2006 Lebanon War.

In a rare interview on Iranian state television last October, Soleimani said that he was in Lebanon with Hezbollah leaders during the 2006 conflict, and that he had remained there for most of the month-long war. During Israeli air strikes on Beirut’s southern suburbs, he and Mughniyeh had insisted on Nasrallah’s evacuation from the command centre, he recalled.

Soleimani also played a key role in modernising Hezbollah and equipping the group with sophisticated weapons, including high-precision missiles capable of hitting targets several hundred kilometres away with a 25-metre margin of error - weapons that are a major concern to Israeli and US forces.

Soleimani’s strategic brinkmanship also allowed Iran to re-establish the land corridor from Beirut to Tehran, after regaining control over portions of the borders and reopening Iraq’s al-Qaim border crossing with Syria.

This helped to break the isolation of Hezbollah, cut off from its Iranian support base after the capture, between 2012 and 2017, of the Syria-Lebanon border by Syrian rebel groups, and of the Syria-Iraq border by IS. 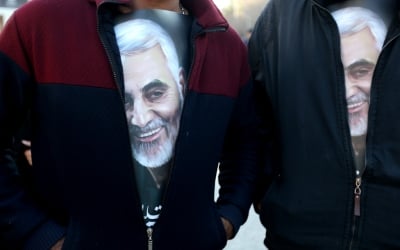 Soleimani’s death is a heavy blow for both Iran and Hezbollah. Condolences released by Nasrallah on 3 January, mere hours after the deadly US air strike, showed how pivotal he was to the Axis of Resistance - the alliance among Iran, the Assad government in Syria, Hezbollah in Lebanon, and other non-state groups.

The Iranian general was “courageous and fearless, an inspiration and a loving father to all resistance fighters” in the region, he said. “We will follow in his footsteps and strive, day and night, to accomplish his goals. We will carry his standard on all battlefields and all fronts, and we will multiply the victories of the Axis of Resistance,” Nasrallah said. Meeting out an appropriate punishment would be “the responsibility and task of all resistance fighters worldwide”.

Nasrallah said that reprisals for the killing of Soleimani could take place anywhere, and could involve both Iran and its regional allies. Lebanon’s foreign affairs department also denounced the US attack, and President Michel Aoun offered condolences to Iranian and Iraqi leaders.

Meanwhile, Lebanese citizens mired in an economic crisis hope that the formation of a new government will slow the country’s collapse. But one jobless Lebanese man told me he feared that Soleimani’s killing "may put an end to those hopes, especially if Lebanon is drawn into a wider regional conflict”.

Qassem Soleimani
Rockets hit Baghdad military base used by US
US Politics
'False, plain and simple': Trump administration accused of lying about Soleimani threat
US Politics
More than 100 US troops diagnosed with brain injuries after Iran attack