Greece and Middle East refugees: Between a rock and a hard place

Charalampos Tsitsopoulos
Now at the epicentre of a humanitarian earthquake, Greece needs to navigate between the Scylla of dire finance and the Charybdis of ineffective regional cooperation 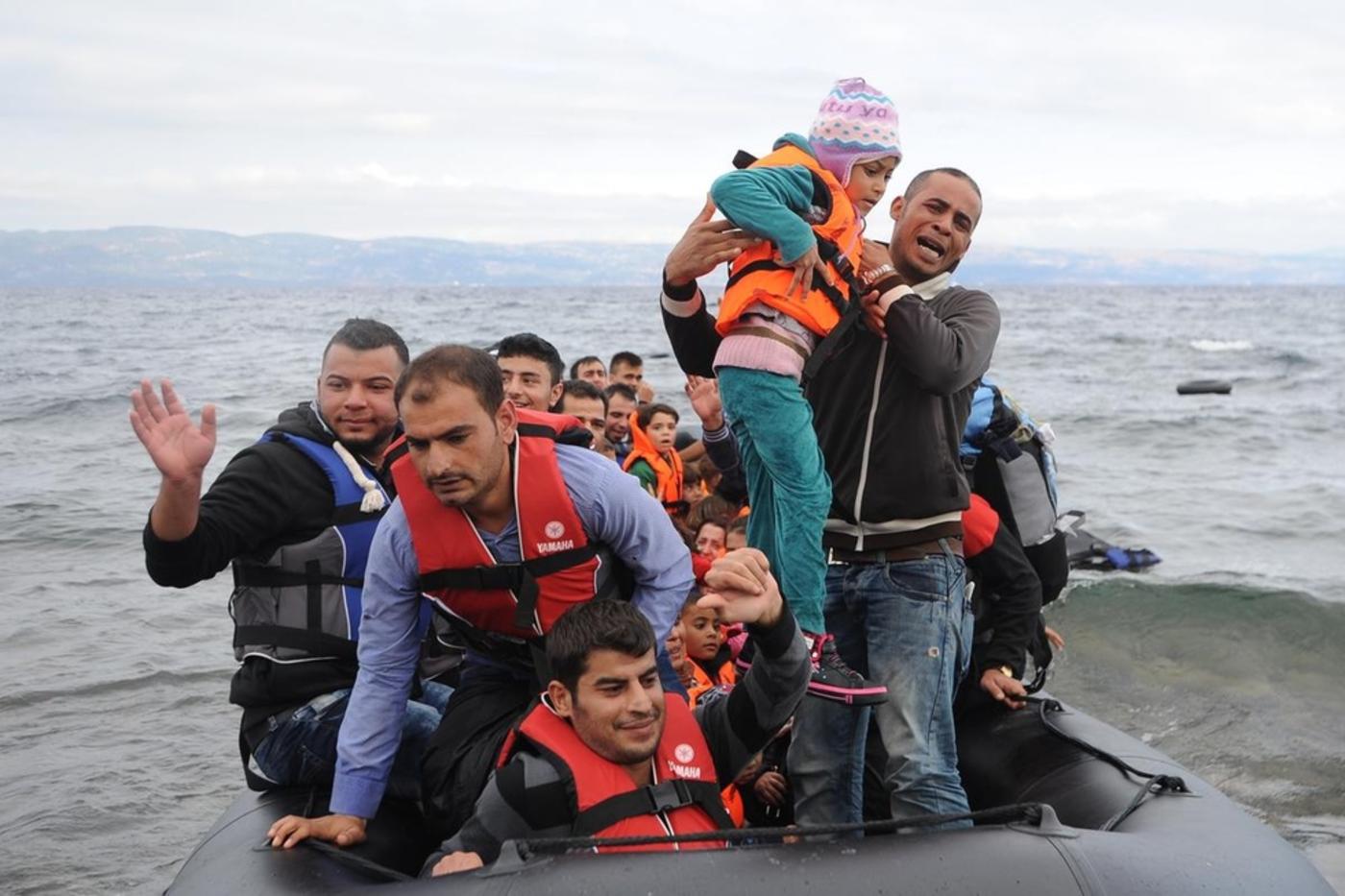 In the midst of an emaciating economic crisis accompanied by a campaign of derision by its rescuers, Greece is now at the centre of the greatest refugee crisis since the end of WWII.

Most discourse rightly focuses on the root causes and the handling of the crisis by European countries. But one would do well to look at Greece, where a confluence of long-time, flawed strategies by a number of regional actors is now reaching its cumulative end-point. The country is not merely a transit route to more affluent European societies. Indeed, as shrewdly pointed by a Greek journalist, the current refugee crisis has the potential to turn Greece into Europe’s first failed state.

The collapse of Eastern European socialist regimes and the subsequent influx of hundreds of thousands of refugees and migrants from all over the world found the country unprepared. Greece rapidly became the country with the lowest asylum-granting rate in the EU. But for a hitherto Western economy, incompetence explained as much as non-existent European cooperation: while the Greek authorities set up cursory detention centres or forcibly returned refugees to Turkey, the Dublin II Regulation made the country of initial EU entry (usually Greece or Italy) responsible for examining asylum applications.

The Arab uprisings starting in 2011 led to the world’s largest wave of mass-migration since WWII. Civil conflicts in Syria and Libya pitting governments against armed insurgents engendered millions of internal and external refugees.

Greece shouldered a heavy burden: in the first months of the uprisings, illegal immigration towards the EU increased by 50 percent. When the central Mediterranean route all but closed following intense efforts between Tunisia and Italy, the route to Europe via Turkey-Greece became the fleeing refugees’ sole alternative.

After the construction of a fence in Evros in late 2012, the departure point moved to the eastern Aegean. Despite the route being a common secret, nothing was done to alleviate human suffering: Greece and Turkey had had a readmission agreement since 2002, the biggest accomplishment of which, according to the UN, was to have forced back into Turkey individuals who could very well have been eligible for international protection. Following the intensification of the wars in Syria, Libya and Iraq in that year, it didn’t take long for the next surge in refugees numbers, reaching its pre-2011 levels in 2014.

Turkish authorities seemed to turn a blind eye to refugees irregularly crossing into Greece by boat, although figures somewhat dropped due to the deployment of Greek officers in the Evros regions as well as the fence. Asylum-granting rates somewhat rose to 2 percent from a previous measly 0.9 percent, although the relevant bureaucracy remained cumbersome. The timing could not be worse, as the establishment of a new asylum agency under the jurisdiction of the Ministry of Citizen Protection in late 2011 coincided with the deepening of the country’s economic crisis.

The agency only began its operations in June 2013, managing to raise the percentage of successful applications to 11.6 percent. For Syrians and Somalis, the rate of international protection-granting reached as high as 99.1 percent. By admission of the agency’s chief, people from these countries have now come to place more faith in the Greek system.

Despite limited progress, the politicisation and inter-state bickering surrounding the issue are disheartening. For example, Turkey is thought to have blocked Syrian refugees amassing in its soil from fleeing westward. This was to pressure the NATO states to intervene in Syria. When this intervention was ruled out, Turkey is thought to have stopped blocking refugees fleeing to Greece, as a means of punishment. The refugees thus seemed to be used as pawns in a political tug of war, with Turkey’s alleged connections to the Islamic State (IS) group making its actions even more ironic. And as if this was not enough, Turkey’s Prime Minister Tayyip Erdogan accused European countries of being “responsible for every refugee death” in the Mediterranean.

What should be done?

The refugee issue in the Mediterranean should be dealt with in a holistic and pan-European manner. Recent aid pledged at an EU refugee summit on 23 September is a welcome step, but aid should have specific goals. For example, out of Turkey’s almost 2 million Syrian refugees, 320,000 are projected to not have any plans to return to their country.

Should aid for them be confined to helping them settle in their new country, offering their children education and healthcare (of which only one-quarter is at the moment receiving)? Will Turkey accept them in the long run or will they also be forced to take the route to Greece at some point?

The EU-funded “hotspots” poised to be set up in Italy and Greece could potentially improve the treatment and Europe-wide distribution of refugees reaching the two countries. But at the moment no one is able to agree on whether these hotspots will be centres of reception or detention, as recently reported in Greece’s daily To Vima.

Europeans have proposed the idea of quotas and proportional distribution; Greece can hardly host as many refugees as Germany or the UK. But numbers should only concern the intra-European allotment and not the amount of refugees Europe should welcome.

As made clear in the 1951 Geneva Convention, every person fearing or fleeing from persecution is entitled to refugee status. This is not permanent and does not rule out repatriation once politics back home improves. Economy-wise, as the UN Human Rights Council has affirmed, one million refugees should not be a problem for the EU. One should keep in mind that much weaker states are currently hosting large numbers of refugees (such as Lebanon, Jordan, Egypt and Iraq with around 2 millions of refugees, or Pakistan with 1.5 million Afghan refugees).

And quotas do not suffice on their own: while Middle Eastern wars continue unabated, so will the flow of refugees. Germany might have indefinitely suspended the Dublin II Regulation (calling for refugees to be registered in their EU country of entry) for Syrians. But what will the country’s reaction be if large numbers of Syrians keep making it their country of choice in the foreseeable future?

In Greece, the first two months of 2015 witnessed a 268 percent increase in asylum applications by Syrian citizens. Most of them get international protection and travel documents and can travel freely to Europe for six months. How many of them will EU states welcome?

Finally, the refugee issue should also be seen and dealt with in its regional political context. Refugees flee their destabilised countries from fear of persecution or complete destitution. While a larger discussion on Europe’s role in an increasingly destabilised environment should also be conducted, dealing with existing dangers on the ground should be given priority. Greece’s diplomatic and geo-strategic status is currently zilch. But given the huge numbers reaching or threatening to reach its shores, Greece should at least raise the issue of the political uses of refugee smuggling.

As is widely known, ISIS-connected smuggling in Libya is estimated to be worth hundreds of millions of dollars. And it wasn’t long ago when journalist Seymour Hersh suggested a weapons trail from Libya to Syria with the involvement of Turkey. Similar refugee smuggling networks are rumoured to be operating in the latter country. Greece and Turkey would thus do well to hold frank discussions on the exploitation of refugees by armed groups as well as border cooperation, something not lost on German Chancellor Angela Merkel, who asked for this much last week.

- Charalampos Tsitsopoulos is a freelance journalist writing on the Eastern Mediterranean. He holds degrees in Communications (Athens, Greece) and Middle Eastern Studies (Edinburgh, UK). He is currently based in Istanbul.

Photo: A refugee boat arrives on the shores of the Greek island of Lesbos after crossing the Aegean Sea from Turkey on 29 September, 2015