How a bishop's murder could change Egypt's Coptic church 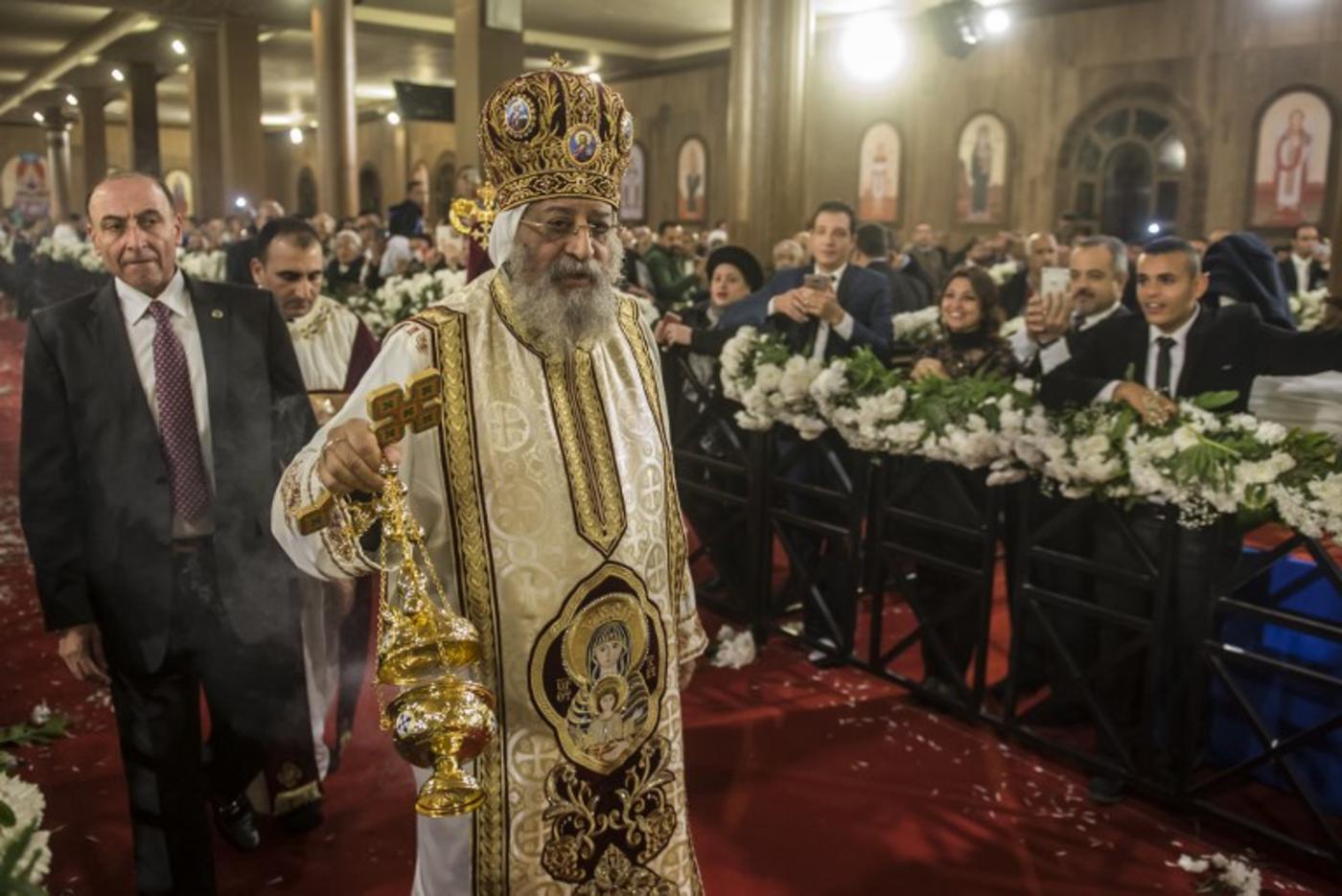 On 29 July, Bishop Epiphanius, the abbot of The Monastery of Saint Macarius, was found dead there, in Wadi al-Natrun, 92 kilometres from Cairo in the western desert of Egypt.

His body was ditched in one of the monastery's passages in the middle of a "pool of blood" with his head cracked open, local media reported. An initial forensic examination indicated that the victim had been hit on the back of his head with a rigid object. The incident has shocked the Coptic community and sparked cofusion within the church itself.c

The Facebook page of the Coptic church's spokesperson first announced the bishop's death in Arabic, shortly after 8:30am. By the afternoon, local news reported that an official investigation had been opened, and the Coptic church spokesperson noted that "given the ambiguity surrounding the circumstances of the death, authorities have been called in and are currently conducting investigations".

On 30 July, the church announced that funeral prayers would be held in the Saint Macarius monastery, restricted to members of the holy synod of the Coptic church, monks, priests, Milli Council members and the bishop's family. The service would be podcasted live.

A few hours after the body was found, a heavy presence of police and criminal investigators descended on the monastery. Some media reports said that more than 60 investigators were involved, spending days questioning everyone who had been in the monastery. The location of the crime, inside the monastery and away from visitors' buildings, suggested that the killer might have been someone who had access to this location and knew the victim’s daily routine.

Just days after the killing, the Coptic church announced that monk Isaiah El-Makary would be defrocked for violating the monastic vows of obedience, chastity and voluntary poverty. A day later, media reported on a failed suicide attempt by another monk, Faltaous El-Makary.

Then, on 11 August, Egyptian prosecutors ordered that Isaiah El-Makary be detained for four days, pending investigations into the bishop's killing. Local media also cited a link between Faltaous El-Makary and the crime, but he has not been charged and remains in hospital following his suicide attempt.

The killing of Bishop Epiphanius has recalled this dispute, with Pope Tawadros II still struggling to deal with many problems that he inherited

Due to their long history of oppression under Egypt's different rulers, Christians have witnessed tough times for their church, but also times of renaissance through important theological debates. In the early 20th century, Habib Girgis started the Sunday school movement, which is now in every Coptic church around the world.

Father Matta El-Meskeen and Nazeer Gayed, who later became Pope Shenouda III, were both influential during this period. Father Matta’s book, The Life of Orthodox Prayer, influenced many Christians, including Gayed himself, who became a monk named Antony and followed Father Matta for a long time.

In 1962, Antony took on a more leading role in the church, becoming the bishop of education with the name of Shenouda. In 1969, Father Matta was recalled by Pope Cyril VI and asked to revive monastic life in Saint Macarius the Great, as it had been deserted for a long time. Father Matta and his disciples relocated to the monastery.

A dispute between Bishop Shenouda and Father Matta began to grow, as Shenouda explicitly denounced Matta's thoughts, labelling some of his writings “heresies”. By 1971, Bishop Shenouda had become Pope Shenouda III, beginning an approximately four-decade spell during which he restricted Father Matta to the monastery and banned his books in Coptic churches.

A significant disagreement between Pope Shenouda III and Father Matta relates to their visions over the role of the church. Matta stated explicitly in his book, The Church and The State, that the church should not seek to represent Christians or form a leadership to call for their rights in the world. He stressed that the church should only be concerned with people's repentance. Shenouda, however, was heavily involved in politics and keen to extend the church’s influence over the social lives of Copts.

Monasteries represented a reservoir of Coptic orthodox theology, and controlling Saint Macarius monastery was important for Pope Shenouda. In 2006, Father Matta passed away, handing his rich legacy to Christians through his books and disciples. Matta's disagreement with Shenouda was inherited by his disciples, so Shenouda decided to assign new monks aligned with his own vision to start a dispute inside the monastery - a dispute that he aimed to control.

The killing of Bishop Epiphanius has recalled this dispute, with Pope Tawadros II still struggling to deal with many problems that he inherited. Tawadros II has supported Matta's disciples, appointing one of them as an abbot to the monastery, and allowed his books to be read in the church. During Epiphanius’ funeral, Tawadros II said that over the last five years, he had assigned him to more than 20 international religious conferences, describing him as “an illumined bishop and a source of light for all those around him”.

Through his tendencies to approach other churches around the world and revive other schools of understanding within the Christian faith, Pope Tawadros II has come into conflict with other conservative bishops. All of this context raises questions about last month's killing and the potential motivation.

Media reports, however, have suggested the motivation was personal. Isaiah El-Makary, who has been charged with the murder, was assigned by Pope Shenouda in 2010 as a monk and priest in the monastery. This past February, Bishop Epiphanius asked Pope Tawadros II to send Isaiah away for serious violations of his vows as a monk; an investigation committee involving three bishops found that he did not obey his abbot or help with work in the monastery, and he often received other monks in his room, in contravention of the rules.

In addition, the committee found he was forming a front to divide the monastery. Pope Tawadros II agreed to put him under observation for three years in another monastery, but Isaiah successfully convinced a group of monks to sign a petition asking the pope to let him stay if he did not repeat the same mistakes. Bishop Epiphanius was reportedly going to open a new investigation as he discovered more violations by Isaiah, which allegedly motivated the crime.

On 2 August, the Coptic church announced 12 decrees for regaining discipline in monastic life. While the killing of Bishop Epiphanius might have been solved, the case has opened fresh debate around many issues within the Coptic church.

For the church as an institution, the incident has highlighted many issues with monasticism in Egypt: how monks perceive themselves, their purpose, their role in the church and the community, and how this moulds their behaviour both at the individual and the institutional level. This was very clear in the 12 decrees, which are moving in the right direction - although decades of accumulated problems and deeply rooted cultural behaviours are not that easy to alter.

For Copts, there are two aspects: firstly, the religious culture aspect, as for a long time, religious leaders have held a distinct place in Copts' hearts, minds and imagination, viewed as role models. It’s hard to believe that someone who left everything behind and went into the desert to live closer to God would commit such a horrible sin. This opens the door to rethinking the concept of clergy and the extent to which they can influence people's lives.

They have faced sectarian violence and communal rejection, pushing them to create their own safe space inside the church walls

The other aspect is the longstanding history of oppression, discrimination and violence against Christians in Egypt. They have faced sectarian violence and communal rejection, pushing them to create their own safe space inside the church walls - a space in which priests and monks have the upper hand and are considered by the community, as well as the state, as their representatives.

So, a huge part of their insecurity about many of the details of this crime has not only to do with the identity of the killer or his motivations, rather it is also related to the fear of being stigmatized in the future by extremists, or that such a crime could feed notions of inferiority that extremists attempted to impose upon them in the past.

For all this, one thing is certain: after the murder of Bishop Epiphanius, the Coptic church, and Egypt's Christians, will never be the same again.

- Mina Thabet is an Egyptian activist and a human rights defender. He worked as a programme manager of Civil Liberties and Minorities programmes at the Egyptian Commission for Rights and Freedoms (ECRF) since 2014. Currently, he is studying Post-Conflict Justice and Peacebuilding at the University of Aberdeen, Scotland, UK. Egypt Turmoil
'We blame the state': Anger and fear after Egypt church bombings