In a bizarre twist, even by Bahrain's standards, Sheikh Salman is being accused of "spying on behalf of a foreign country... with the aim of carrying out subversive acts against Bahrain and harming its national interests".

And the story edges into the surreal with the claim that Sheikh Salman colluded with Qatar's then prime minister and foreign minister Hamid bin Jassem al-Thani "to carry out hostile acts". The alleged collusion began in 2010 according to the Bahraini public prosecutor and continued the following year.

Qatar, it is further claimed, provided money to al-Wefaq to carry out a terror plot that killed two police officers in 2015. This was more than two years after Hamid bin Jassem had left office.

I first met Sheikh Salman in February 2012 at the now-shuttered headquarters of al Wefaq, which was banned in 2016. He spoke carefully and methodically in a measured tone insisting all the while that his organisation was peaceful and that it wanted dialogue with the government.

He said al-Wefaq was doing everything it could to control the nightly rioting that was then rocking the capital Manama and many outlying towns and villages. He called for the government and its security forces to stop behaving with impunity. He adamantly denied the claim that he or his society were acting at the behest of Iran.

Sheikh Salman paused from time to time to sip a glass of water. At the end of the interview, he apologised for being exhausted. It was understandable. His house, he told me, had been targeted the night before, and not for the first time, by security forces with tear gas.

The interview was done almost precisely one year to the day that Wefaq had pulled its 18 members out of Parliament in protest at the brutal crackdown carried out by police and security forces on peaceful demonstrators at Pearl Roundabout in Manama in February 2011. (For a full account of events in February and March of that year, and an understanding of just how badly the regime behaved, I refer readers to the report of the Bahrain Independent Commission of Inquiry or BICI. The report, it is worth noting, was accepted in full by King Hamad.)

In response to my question on the boycott, Sheikh Salman said that had Wefaq remained in parliament it would have legitimised the actions taken by the government and the ruling Sunni family against the protesters and the majority Shia population.

A year later I interviewed him in London at the BBC. He was as thoughtful and as determined as ever though the conflict had become a seemingly intractable impasse that defied any resolution.

He called again for peaceful dialogue while denouncing violence on both sides and once again he denied charges that he was a front man acting for Iran in a bid to destabilise Bahrain. Sheikh Salman, against the wishes of some leading al-Wefaq members, continued the boycott of parliamentary elections in 2014, a decision that in hindsight was a political blunder.

A group of malleable MPs proceeded to rubber stamp what began the metastasis of Bahrain into a full-blown police state.

In October 2014, in the wake of the society's decision to boycott the election, al-Wefaq was banned for three months, a warning shot that announced worse was soon to come. A few weeks later Sheikh Salman was arrested. In July 2015 he was sentenced to four years in jail after being convicted of "inciting hatred, promoting disobedience and insulting public institutions."

The following June an appeal court more than doubled his sentence, to nine years. At about the same time, the spiritual leader of al-Wefaq and of Bahrain's Shia community, Sheikh Isa Qassim, was detained under house arrest and stripped of his citizenship. Wefaq was dissolved in July 2016.

Now we learn that Sheikh Salman has been charged retrospectively with "colluding with the enemy" in 2011 in a bid to overthrow the government.

Bahrain is part of the so-called Quartet – Egypt, Saudi Arabia and the United Arab Emirates are the other members – who, in June, launched a land, sea and air blockade of Qatar, their fellow Gulf Cooperation Council (GCC) member, on the grounds that it was a source of terror funding.

It is a charge that on reflection might equally be put to Saudi Arabia and the United Arab Emirates. In reality the terror funding charge masked the Emiratis' fury at Qatar's support for the Muslim Brotherhood and the Saudis' long and simmering resentment of the Qatari funded Al Jazeera network.

The Quartet, led by Saudi Arabia and the UAE, expected Qatar to crumble quickly. It hasn't. Nor has any country of stature joined the four in their diplomatic and economic blockade.

The campaign against Qatar looks increasingly to be a foolish game of brinkmanship played out at the behest of the Abu Dhabi Crown Prince Mohammed bin Zayed and his Saudi counterpart Mohammed bin Salman. The great irony, of course, is that the only winner in this unnecessary feud is Iran which has, without having to lift a finger, watched as the GCC ruptures.

The Bahrainis, who recently went cap in hand to the Saudis and the Emiratis for more money to shore up their floundering economy, have conveniently banged together a case that draws the main opposition leader into a conspiracy with Qatar in a classic quid pro quo arrangement.

And finally it is a measure of the vindictive and vicious nature of a regime and a ruling family that has systematically constructed a police state in Bahrain in which its Shia population lives in constant fear.

Photo: A Bahraini protester holds a placard depicting a portrait of Sheikh Ali Salman, head of al-Wefaq opposition movement, during clashes with riot police following a protest against Salman's arrest in the village of Sitra, south of the capital Manama, on 29 January, 2016 (AFP). 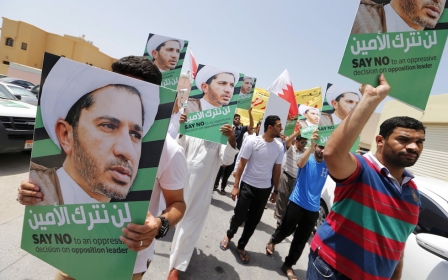 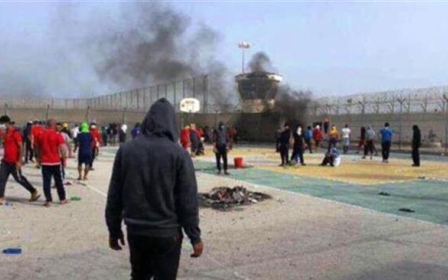