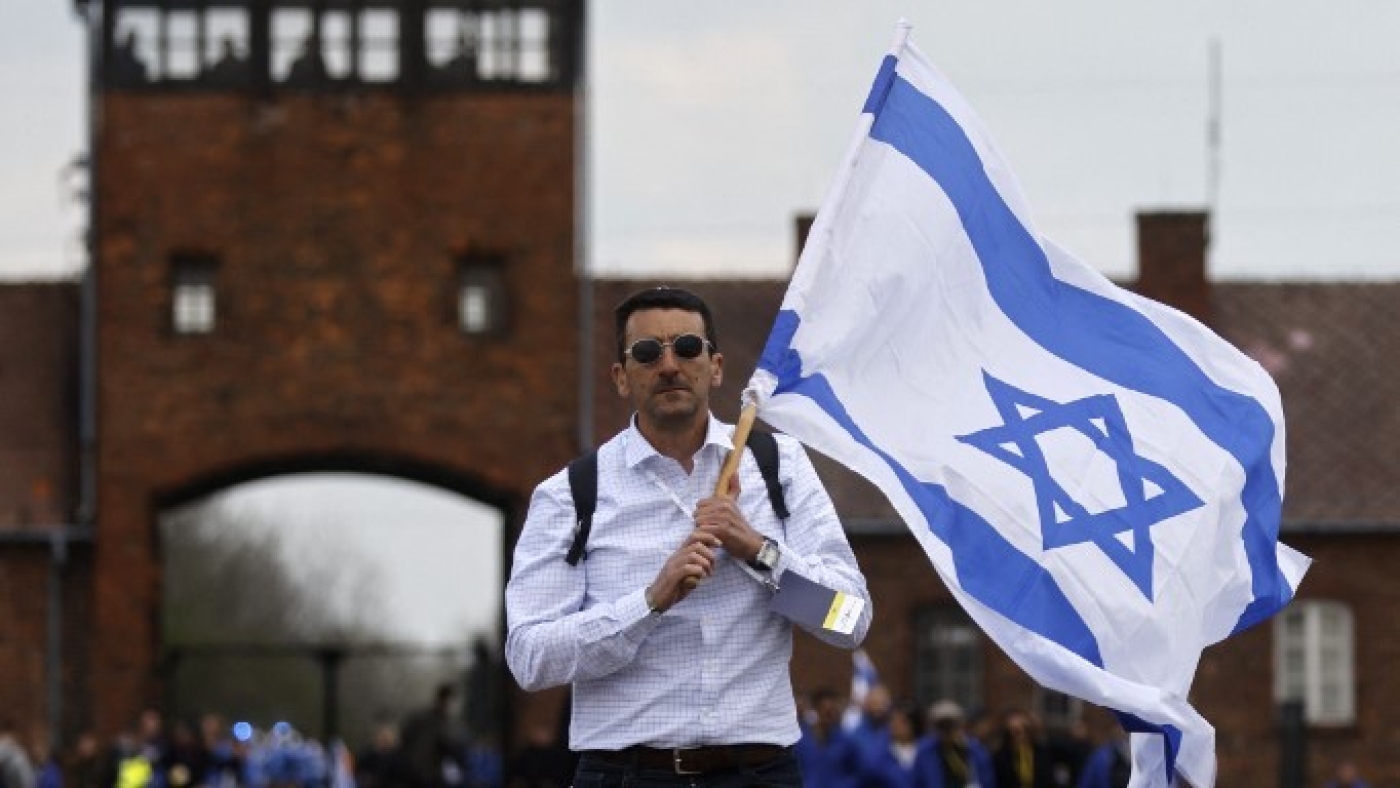 Founded in late 2020 after the signing of the Abraham Accords, Sharaka aims "to build bonds between young Israeli and Gulf leaders". Around 100 Palestinian citizens of Israel also participated in the Holocaust commemoration. While the Arab delegates who spoke to the media failed to mention Israel’s ongoing colonial oppression of the Palestinian people, they did speak about how in commemorating the Holocaust, they aimed to strengthen Arab-Israeli relations and see “Arabs coming together with Israelis voluntarily”.

Since World War II and the establishment of Israel in 1948, Palestinian Arab history and Jewish history have been inextricably linked. Israeli Zionists have appropriated events in Jewish history, including the Holocaust, for propagandistic purposes to assert their "right" to Palestine - a land to which they had laid their suspect colonial claim half a century before the genocide.

This formula was enshrined in the 1948 Declaration of the Establishment of the State of Israel: “The Nazi Holocaust, which engulfed millions of Jews in Europe, proved anew the urgency of the reestablishment of the Jewish state, which would solve the problem of Jewish homelessness by opening the gate to all Jews and lifting the Jewish people tfo equality in the family of nations.”

Israel began to use the Holocaust more insistently in the 1960s and 1970s in defence of Israeli colonial violence against Palestinians. Palestinians and other Arabs were called upon to accept the linkage between the Holocaust and Israel’s “right to exist as a Jewish state” as a package deal. Former Israeli Prime Minister David Ben-Gurion unequivocally asserted that "the Jewish state is the heir of the six million [Jews who died in the Holocaust] … the only heir".

The response of Palestinians and Arabs to this linkage has varied. Some, falling into the Zionist ideological trap, have reasoned that if accepting the Holocaust means accepting Israel’s right to be a settler-colonial, racist state, then the Holocaust must be denied or at least questioned.

In contrast, the Palestine Liberation Organisation (PLO), along with many Arab intellectuals, have actively sought to delink the two events. These attempts have been condemned by Israel, which also rejects the Palestinian contention that Holocaust survivors left Europe as refugees but arrived in Palestine as armed colonial settlers.

According to Hanna Yablonca's book (Survivors of the Holocaust) around 22,000 soldiers, or a third of the Zionist army, the Haganah, and one half of its fighting force during the 1948 war were Holocaust survivors is crucial, as they participated in the expulsion of Palestinians and in many horrific massacres. As Tom Segev points out in his book The Seventh Million, Holocaust survivors also took part in the looting and pillaging of Palestinian property.

In the Israeli media, a photograph of Israeli soldiers expelling Palestinians included the caption: “Note the number tattooed on the guarding soldier’s arm. Many of the immigrants who have been through the hell of the European concentration camps lack the proper attitude toward the Arab captives of the state.” 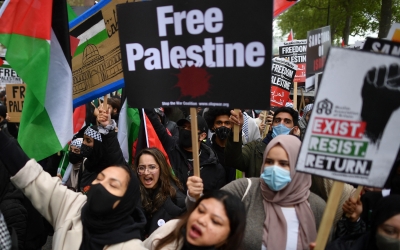 Warsaw Ghetto survivors, to take an important example, built Kibbutz Lohamei HaGeta'ot, which houses the Ghetto Fighters Museum, on top of the destroyed Palestinian village of al-Sumayriyya, whose inhabitants were expelled during the 1948 war.

Many Palestinians have argued that the Holocaust was a European Christian crime for which the Palestinian people are forced to atone. For its part, the PLO has always distinguished between Zionists and Jews.

In this, it differs sharply from Israel and its supporters, who identify Zionism and Israel as “Jewish” and advance Zionism’s colonial claim to Palestine on the basis of Jewishness. The PLO has always rejected this coupling, calling Israel not the “Jewish state” but the “Zionist entity”. Israel considers this a sign of Palestinian antisemitism.

The PLO has always made a point of demonstrating its sympathy with the Jewish victims of the Holocaust and condemning the Nazis. When former Palestinian leader Yasser Arafat addressed the UN General Assembly in 1974, he “vociferously condemn[ed] the massacres of Jews under Nazi rule”. He emphasised that the Palestinian struggle was not against Jews, but against “racist Zionism”. In recent years, Hamas has adopted this position almost verbatim.

Moreover, after reviewing the British and Zionist atrocities against the Palestinian people, Arafat emphasised that “we deplore all those crimes committed against the Jews … [and] the real discrimination suffered by them because of their faith”.

'Victims of the new Nazis'

On the 40th anniversary of the 1943 Warsaw Ghetto Uprising, the PLO announced plans to place a memorial wreath at the Warsaw Ghetto monument to honour “the hero Jews”. Unlike the Sharaka delegation, which seeks to show solidarity with Israel rather than with Jewish victims of the Holocaust, Fuad Yassin, the PLO’s representative in Poland, said that Jews who died fighting to repel the German occupiers are “our comrades and brothers … we consider these the hero Jews”.

The PLO plan immediately drew protests from leaders of the Simon Wiesenthal Center, a US group participating in the commemoration. Rabbi Alexander Schindler, the leader of the US delegation, expressed outrage: “The participation of those who murder Jewish women and children and who celebrate the slaughter of innocents would make a hideous mockery of everything for which this commemoration stands.”

Yassin expressed amazement; for him, Palestinians wanted to honour Ghetto heroes because “we are still facing that kind of fascism against our people”. At the ceremony, Yassin, accompanied by other PLO delegates, laid a wreath at the monument and asserted: "I have placed a wreath because the Jewish people were victims of Nazism and the Palestinian people are the victims of the new Nazis … the Zionists and Israel."

Israel ordered its delegates to return home in protest.

The 1993 Oslo Accords did not dampen Israel’s attempts to liken the Palestinians to the Nazis. When then Polish President Lech Walesa planned to invite Nobel Peace Prize winners, including Arafat, to the 50th anniversary of the liberation of Auschwitz in January 1995, Holocaust survivors, Yad Vashem officials and Jewish groups were up in arms.

The head of the Mengele Twins Organisation stated that "Arafat doesn’t have to be in Auschwitz … He was a continuation of what [the Nazis] did." The European Jewish Congress called for a boycott of the event because Arafat “represents a great suffering for the Jewish people”. With pressure mounting against the Polish government, Walesa decided not to invite the Nobel laureates.

Arafat was persuaded in 1998 by the Clinton administration to pay a visit to the Holocaust Memorial Museum in Washington DC. The museum, however, rejected Arafat’s overture. Members of the American Jewish community warned museum director Walter Reich that “this [Arafat] is Hitler incarnate".

Israeli officials applauded the rebuff, but there was a public outcry in Washington.

Faced with a rebellion by the museum’s board, Miles Lerman, chairman of the Holocaust Memorial Council, extended an invitation to Arafat. An Israeli embassy official explained that if Arafat “is going to learn about the Holocaust, and if he’s not going to deny it, then all the better”. The chairman of the Yad Vashem directorate added: “Maybe Arafat will be more reluctant to deny [the Holocaust].”

The fact that neither Arafat nor the PLO had ever denied the Holocaust and had always expressed solidarity with its victims was immaterial to such propaganda. Arafat finally opted not to go.

With the belated museum invitation, the Zionist and Israeli consensus on Arafat and the Holocaust appeared no longer to hold. As Israeli condemnation of Arafat, the PLO, and any Palestinian attempt to show solidarity with the Holocaust continued as late as 1994, this sudden change in attitude was on account of Arafat’s more recent surrender to Israel.

Arafat’s prospective visit to the museum was not to be staged as one of solidarity between a people who continued to be victims of oppression and another people who were in the past victims of oppression but were no longer victims, but rather as an affirmation on Arafat’s part that he understood and sympathised with Israel, whose crimes he forgave since signing the Oslo Accords.

His visit was going to ratify Palestinian acquiescence in viewing the Holocaust as justifying Israel’s "right to exist" as a settler-colonial entity. Arafat’s prospective visit recalls Anwar Sadat’s visit to Yad Vashem in 1977 in the company of Menachem Begin. Sadat’s visit, like Arafat’s, was also a symbolic submission to the Israeli appropriation of the Holocaust.

The PLO’s submission to Israel’s rewriting of Zionist settler-colonialism had in fact begun even before Oslo. Part of the price for the 1991 Madrid Peace Conference was the repeal, in December 1991, of the 1975 UN General Assembly resolution characterising Zionism as “a form of racism and racial discrimination”. Castigating protests against Israeli racism as genocidal antisemitism, Israel’s UN ambassador, Chaim Herzog, told the General Assembly delegates when the resolution was passed in 1975 that Hitler would have felt at home among them.

Israeli demands that Palestinians and Arabs commemorate the Holocaust are not about the Holocaust at all, but about the other part of the formula, namely recognising and submitting to Israel’s “right to exist” as a settler-colonial, racist Jewish state. The Palestinian Authority gave up three decades ago, as have the Arab governments who signed peace accords with Israel - but the Palestinian and Arab peoples continue to resist this Israeli rewriting of both Palestinian and Jewish histories. 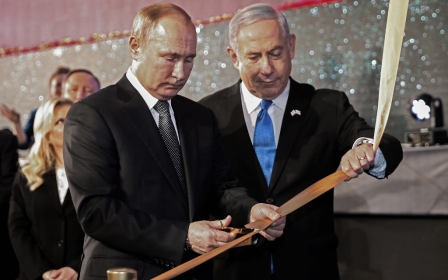 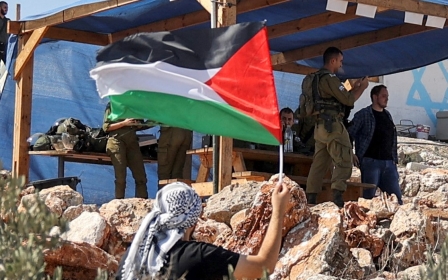 Occupation
Israel-Palestine: The 'victims of victims' metaphor serves no one
Omar Khalifah 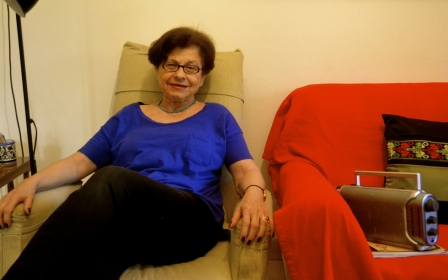