Ladeeda Farzana
Taking a page out of Israel's playbook, the Hindu nationalist government's home demolition policy is destroying Indian Muslims' foundation for stability and even life 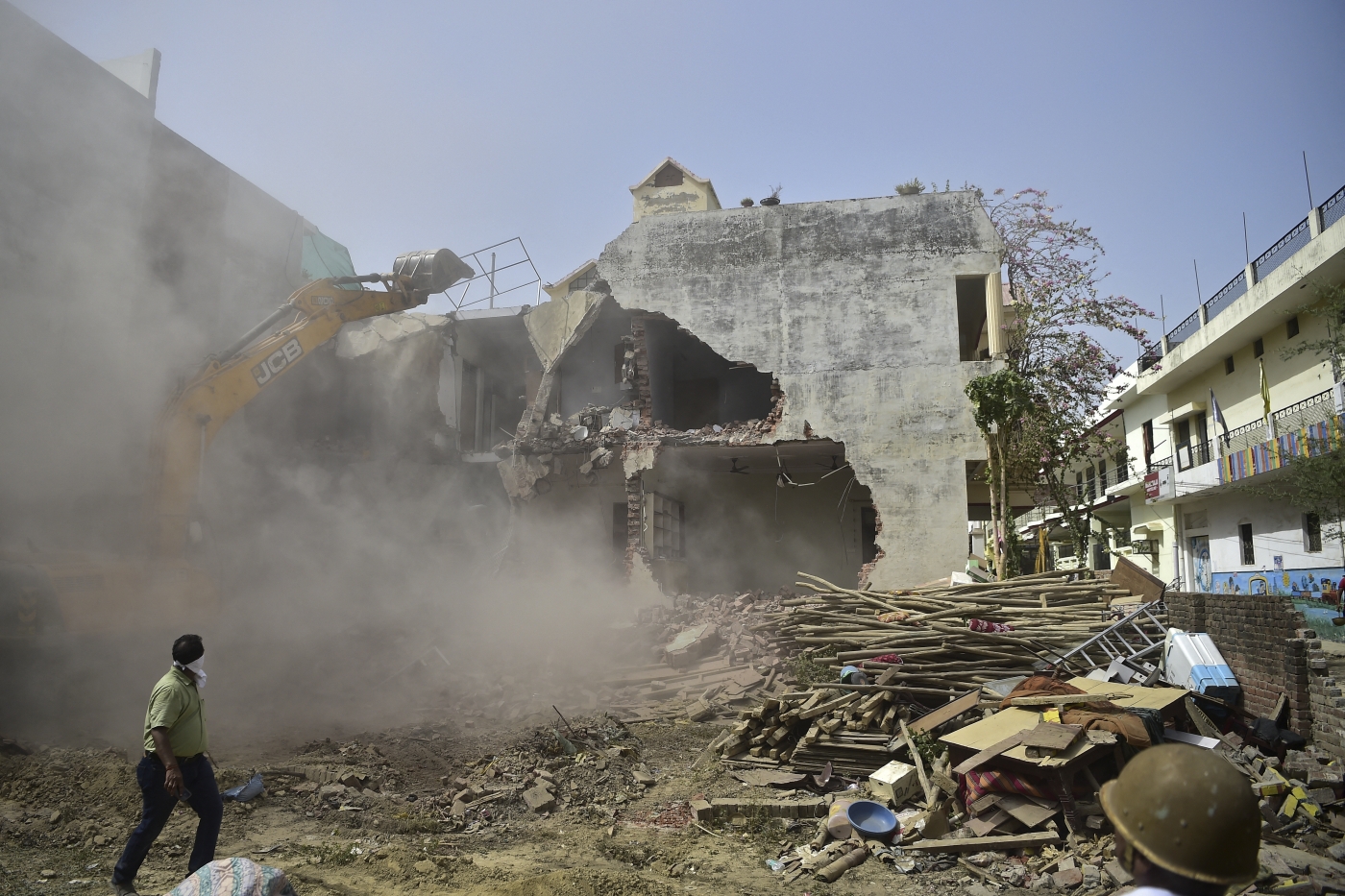 A bulldozer is used to demolish the residence of Javed Mohammad, a political activist accused of inciting riots in Allahabad on 12 June, 2022 (AFP)

As a Muslim born into a political climate irreparably shaken by the illegal demolition of the Babri mosque in 1992, studying and observing these realities in India and in other parts of the world helped shape my generation's political consciousness.

India is quickly transforming into a totalitarian Hindu nationalist state

Today such images have become a part of everyday life for Indian Muslims. Recent developments in India should be analysed with the backdrop of a war against Muslim minorities within a nation triggered by Islamophobia.

Taking a page out of Israel’s playbook, the right-wing Hindu nationalist Indian government has been using bulldozers in recent years as a tool of repression and collective punishment. Deemed legal, property demolition often targets critics and peaceful protesters and is aggressively carried out without meaningful notice.

In Uttar Pradesh, the home of Javed Mohammad, a political activist with the Welfare Party of India, was razed following his arrest in connection to protests that broke out in Allahabad. The demolition notice came just one night before the home was bulldozed on 11 June. His wife and daughter were briefly detained, but subsequently released.

From citizens to refugees

Recently, Hindu festivals and gatherings have become a stage to unleash widespread violence against Muslims, especially in the states ruled by Hindutva.

The resurgence of violence against Muslim minorities culminated in a massive demolition campaign targeting their homes, mosques, and businesses. In a short span of time, Muslims have turned into refugees in their own villages due to this violent state-sponsored pogrom and institutional repression.

Last month, Nupur Sharma, a national spokesperson for the ruling Bharathiya Janatha Party (BJP), made statements on a television programme insulting the Prophet Muhammad, leading to large-scale demonstrations across the country.

The BJP was forced to suspend Sharma from the party due to the diplomatic discomfort of the heads of Arab states, and calls to boycott Indian products trending on social media. In retaliation for this move, Hindutva forces waged violent attacks with the support of the state apparatus.

Criminal cases were also manufactured against peaceful protesters who were denied legal and human rights.

Since Narendra Modi’s government came to power in 2014, the Hindutva political project to racialise Muslims has been gaining momentum in India.

India is quickly transforming into a totalitarian Hindu nationalist state made possible through lynching, hate campaigns, and retaliatory measures against the Muslim political and economic establishment. In striking contrast to the established democratic process, the genocidal project is gaining societal approval through majoritarian populism.

In short, all that remains is the declaration that India is officially a Hindu nation. Hindutva forces and their adherents believe that Muslims have no right to exist in India, a Hindu holy land. As part of this Hindu nation-building process, Muslims are subjected to forced deportation, or remain a disenfranchised community, as pledged by the early Hindutva acharyas (spiritual teachers).

The Hindutva acharya, MS Golwalkar, argues that "a territory was not a nation; a people constituted a nation. Who were this people? In the Indian case, Hindus."

And Veer Savarkar, the man credited for creating Hindutva, argued that the rights that Hindus deserve to enjoy as a majority under a democratic and legal framework can never be denied, and are the primary impetus for the Hindu national project. In forming a new nation-state that guarantees constitutionally equal citizenship, Savarkar declared that "minorities no longer need special rights".

In 2019, the Hindutva-led government proposed the Citizenship Amendment Act as a practical step towards realising a Hindu nation. When it comes to the "Hindu Nation", it is evident that one becomes an Indian only when one becomes a Hindu.

Gyanendra Pandey, a prominent Indian political and social thinker, enquires whether a Muslim can become an Indian. He points out: “All Hindus naturally become nationalists by the mere fact of being Hindu, while Muslims also become communalist by the very mere fact [of being Muslim]. To avoid this, Muslims must constantly prove that they are nationalists.”

India sends a signal to Muslims: You are no longer welcome
Azad Essa
Read More »

Another prominent socio-political thinker in India, Professor G Aloysius, also pointed out in his study "Nationalism without a Nation in India" that Indian nationalism was formed in response to British colonial occupation and to protect the interests of upper-caste Hindus in India.

Another important historical premise on which the Citizenship Amendment Act was built followed the formation of Pakistan in 1947. The remaining Muslims in India would only be granted suspicious citizenship preventing their integration into Indian nationalism. Muslims were the racial counterparts of Indian nationalism, leading to current policies rendering them stateless in their own country.

The Supreme Court's verdict in 2019 awarding the land of the Babri Masjid mosque to the Ram Temple and acquitting the Hindutva culprits who demolished the Babri Masjid in 1992 was a blatant legal injustice denying Muslims their religious rights – a perpetuation of the state’s systemic attacks on Islamic religious institutions.

Jail authorities and district administration have denied presence of my father, Janab Javed Muhammad, in the Naini Central Jail where he was kept following his arrest. We are concerned about his safety and health! pic.twitter.com/C9bIfsRuQY

The 2022 court order which banned hijab in the name of dress codes in educational institutions in Karnataka state was also driven by Hindutva forces. Ironically, despite their opposition to the headscarf for its violation of school “uniforms”, Hindutva followers commonly wear saffron shawls not considered a religious necessity in India.

The Babri judgement and the ban on the hijab are unmistakable markers of the denial of religious and cultural rights to Muslims. The Karnataka high court ruled that the hijab was not an essential religious practice, declaring that the courts – not religious authorities – would decide such matters.

The high court upheld this ruling denying Muslims their dress requirements while allowing other minorities such Sikhs to maintain their turbans in Indian institutions. Though there have been many institutions where the hijab is banned in the name of uniforms, this was the first time a court order has imposed a legal ban.

The politics of the 'enemy'

The Islamophobia driving Hindutva policies is not limited to India’s far right. Political anthropologist Irfan Ahmad developed a critical framework to understand Indian politics using Reinhart Koselleck's concept of conflict. He observes that, beyond superficial differences, all parties ideologically convene on the politics of the "enemy".

Ahmad examines how the otherisation of Islam and Muslims in India is not only a Hindutva phenomenon, but also an integral part of India's political psyche.

The otherisation of Islam and Muslims in India is not only a Hindutva phenomenon, but also an integral part of India's political psyche

For example, many mainstream anti-fascist allies in India portray the hijab as a sign of oppression of Muslim women and thus encourage them to remove their hijab in progressive and secular spaces like educational institutions. Indian feminism is also largely rooted in western ideas and advances orientalist stereotypes of the "oppressed Muslim woman" and the "oppressive Muslim man".

Last year, even after hundreds of Muslim women activists were put up for "auction" on apps like “Sulli Deals” and “Bulli Bai”, mainstream feminists were silent. Though the “protection of women” is a driving principle of mainstream feminism in India, they did not take up this issue as they might not have found a Muslim villain.

It should be noted that feminist discourse in India was defined under the upper-caste Hindu gaze.

Similarly, anti-Hindutva groups have failed to put forward a project to "de-radicalise" Hindutva followers culturally and religiously, even though they are the largest violent mob in India. In their definition, it is only Muslims who are subject to radicalisation and threaten national security; violence perpetrated by Hindutva forces is politically motivated.

This approach is widely criticised by Muslim intellectuals and scholars.

A declaration of war

When Indian Muslims and Islamic universities staged massive protests opposing the government’s plan to deport Muslims under the Citizenship Amendment Act, leaders were imprisoned under draconian laws including the National Security Act (NSA) and the Unlawful Activities Prevention Act (UAPA).

Though Hindutva forces have not yet been able to practically enforce the Citizenship Amendment Act, the current bulldozing policy is a declaration of war on Muslims, destroying their foundation for stability and even life.

All concepts, ideas, and institutions that constitute the modern nation state such as liberal democracy, secularism, and the rule of law, have been mute spectators in front of the Muslim genocidal project. But the support from individuals and groups internationally has been a great inspiration to Indian Muslims.

Beneath the rubble of their bulldozed homes and mosques, Muslims in India have cultivated a culture of resistance. Determined to live, Indian Muslims will continue fighting for their existence while writing their own history of struggle against injustice.

Ladeeda Farzana is a student activist and writer from Jamia Millia Islamia. Farzana has been a prominent face in the fight against Hindutva and Islamophobia in India since the Anti Citizenship Bill protests in 2019. 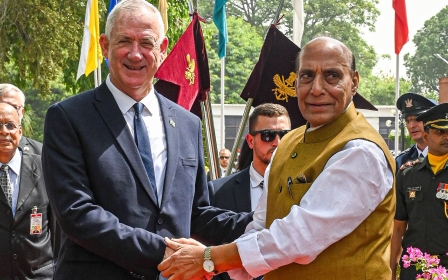 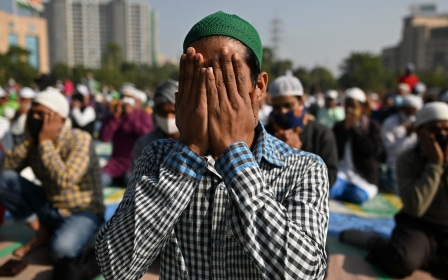 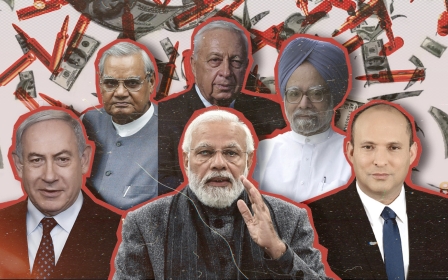