UAE-Israel deal: The new hegemons of the Middle East

David Hearst
This bleak vision will fail, much faster than the Jordanian and Egyptian treaties with Israel which too were built on sand. It can only lead to more conflict 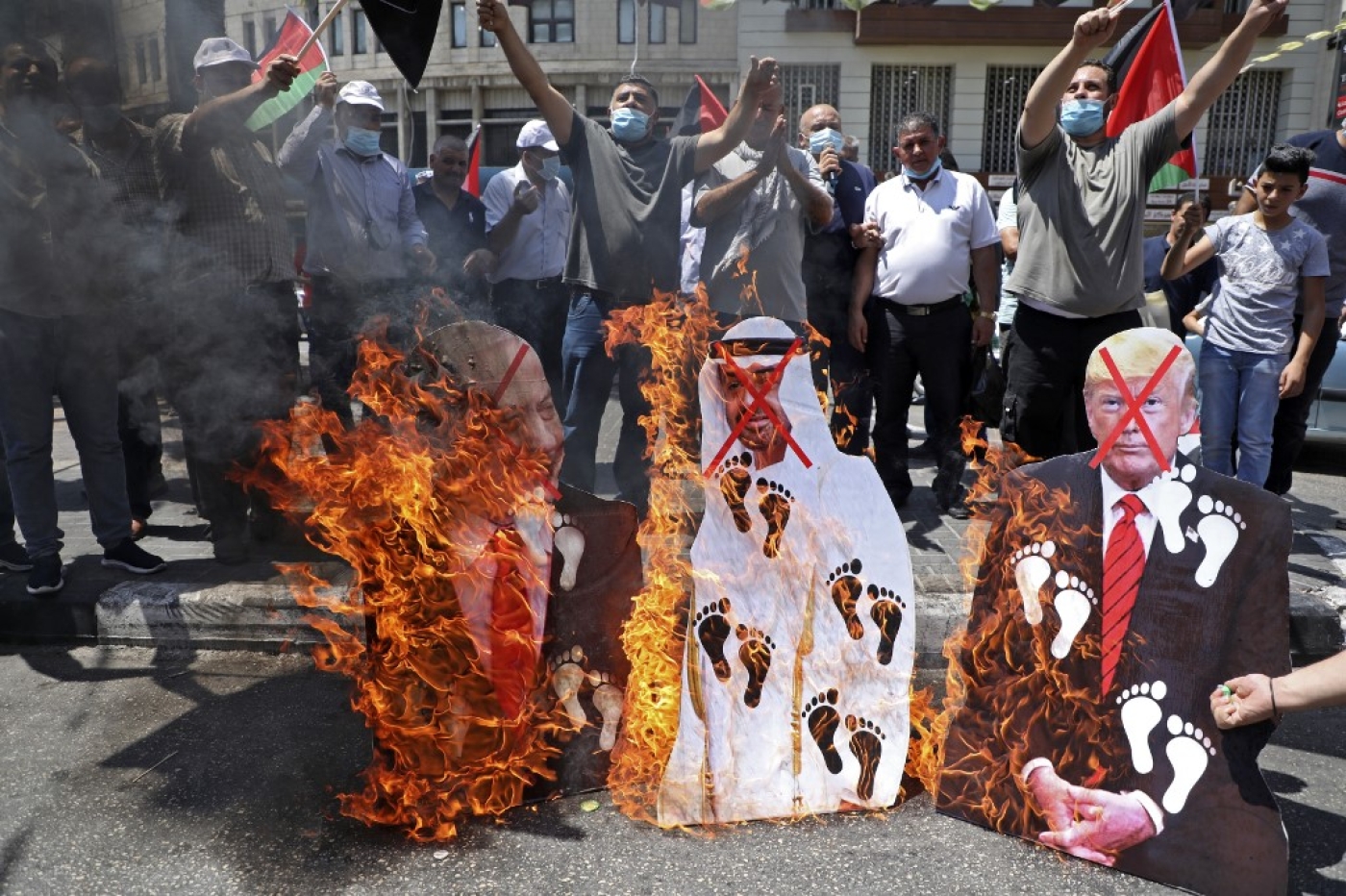 The three men who hatched the first recognition by an Arab state of Israel in 26 years are all in trouble domestically.

US President Donald Trump is finding any way he can to stop his fellow Americans from voting in an orderly fashion in November, because if enough of them did, on current poll ratings he would lose. Israeli premier Benjamin Netanyahu has been overwhelmed by the protests outside his home at his handling of Covid, and Abu Dhabi Crown Prince Mohammed bin Zayed has seen one pet project after another crash in flames into the sea - first the coup attempt in Turkey, then the siege of Qatar, and latterly the failure of his surrogate forces to seize Tripoli.

Each man needed a diplomatic coup, something their media could call historic. Each knows what would happen to them if they lost power

Each man needed a diplomatic coup, something their media could call historic. Each knows what would happen to them if they lost power. For Netanyahu and Trump it could mean prison. For MBZ it would mean exile or death. His love affair with Israel is his life insurance. Their personal  fates are, to an extraordinary sense, intertwined.

MBZ needed to find an alternative regional backer, acutely aware as he was of the falling value of his investment in Trump. He has made enough enemies in the CIA and the Pentagon to know that the moment Trump leaves the US deep state will return with a vengeance.

Netanyahu needed to find an exit strategy from protests and a fraying coalition, to find a policy that he alone controlled. While he has once again betrayed his right wing by freezing, although not abandoning, annexation, the Houdini of political escapes has just wriggled out of his handcuffs once again.

"For the first time in the country's history I signed a peace agreement coming from strength - peace for peace," his video tweet boasted. "This is the approach I have driven for years: making peace is possible without turning over territories, without dividing Jerusalem, without endangering our future. In the Middle East, the strong survive - and a strong people makes peace."

Trump needed a signature foreign policy stunt, something he could call a return on all the political capital he has spent on his son-in-law, Jared Kushner. The "Deal of the Century" was always going to be dead on arrival. Trump needed a tangible.

End of the affair

But this deal, to be buttressed by Morocco, Bahrain, Oman and Saudi Arabia, differs fundamentally from Egypt's or Jordan's peace deals with Israel. Each in their turn was the start of an affair. Each heralded wider negotiations which, for a time, brought the hope of a just settlement to the Palestinian conflict.

This is the end of an affair. No negotiations, outside the palaces of the players involved, have taken place over this. There will be no elections to seek a popular mandate. Not one of the many querulous Palestinian factions or parties has gone anywhere near this, as to do so would mean the abandonment of East Jerusalem as the capital of a Palestinian State, negotiations on the basis of 1967 borders and the right of the return.

This deal is not about peace. Arab leaders have met Israeli leaders regularly. King Abdullah 1 of Jordan met Zionist leaders before 1948 and his grandson King Hussein carried on the tradition. His biographer Avi Schlaim counted 42 meetings with his Israeli counterparts. King Hassan of Morocco used Mossad to get rid of his opponents.

None of this regular contact between avowed enemies changed the rejection of Israel by the Arab masses.

The UAE's recognition of Israel has nothing to do with the search for an end to conflict. Its about establishing a new regional order between dictators and occupiers - Arab dictators and Israeli occupiers. As America withdraws as the regional hegemon, new ones are needed. Step forward Israel and the UAE.

Trade, unimpeded telecoms, travel and recognition between Israel and its richest Gulf neighbours will become new "facts on the ground," its architects imagine, as immutable as the roads that bypass Palestinian villages and the settlements themselves. No negotiation is required. Just the white flag of defeat.

This accord is virtual reality. It will be blown away by a new popular revolt not just in Palestine but across the Arab world

I am fairly confident that Palestinians won't wave the white flag of surrender today, any more than they would have done in the past seven decades. They will not abandon their political rights and take the money. But nothing less is required for this plan to succeed.

If this moral collapse was going to happen anywhere, it would have happened in an enclave Israel has starved for the last 14 years  - Gaza. But there is no sign of popular resistance to Israel waning. Nor will this happen in the relatively freer West Bank .The Palestinian Authority called the decision "despicable" and "treason" to the Palestinian people, to Jerusalem and to Al-Aqsa Mosque.

The wave of anger and resentment coursing through Palestinian veins is reflected in the Arab population at large. Every honest attempt to monitor popular opinion on this issue comes up with answers Trump, Netanyahu and MBZ would rather not hear.

There will be a reaction to this both among Palestinians and on the Arab street in general. It is already possible to discern two trends.

Among Palestinians, this deal will force Fatah and Hamas, bitter rivals since the civil war in Gaza in 2007, into each other's arms. That is already happening at youth level, but such is the degree of anger and betrayal felt in the top echelons of the Palestine Liberation Organization that it is also happening at leadership level as well.

If Netanyahu and bin Zayed are on the phone to each other, so too now are Mahmoud Abbas, the Palestinian president, and Ismail Haniyeh, the political leader of Hamas. The Palestinian Authority's strong reaction to the Emirati accord was welcomed by Hamas. A Hamas source told Arabi21 that he saw the PA's position as an "opportunity for joint political and field action in the West Bank and Gaza Strip". 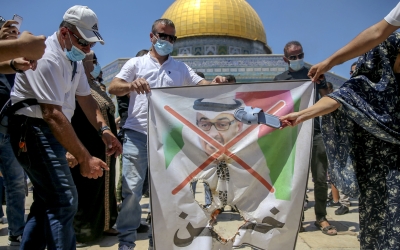 If this new sense of common purpose between the two main rival Palestinian factions is sustainable  - and Abbas in the past  has been unwilling to accept any partners in the governance of Palestine - this is the beginning of the end of arrests of Hamas activists in the West Bank by the Palestinian Preventive Security.

This was once headed by Jibril Rajoub, who is now general secretary of Fatah. But today Rajoub holds press conferences with Hamas's second in command, Saleh Arouri - a further sign that the rapprochement between the two parties is gathering momentum.

Rajoub, who was speaking during a joint teleconference press interview with Arouri, said: "We will lead our battle together under the flag of Palestine to achieve an independent and sovereign Palestinian state on the 1967 borders and solving the issue of the refugees on the basis of international resolutions."

This reaction would have been foreseen by the Arab hegemons and Israel. Their answer is to promote the exiled Palestinian leader Mohammed Dahlan and/or his surrogates as the next Palestinian president.

I revealed this plan four years ago. It was written down in black and white in a document summarising the discussions between the UAE, Jordan and Egypt.

In it, Dahlan's homecoming was specifically linked to "a peace agreement with Israel with the backing of Arab states".

Dahlan himself, who is in exile in Abu Dhabi, has said nothing about the agreement. But his faction within Fatah, which calls itself the "Democratic Reform Movement," issued a statement saying it "followed with great interest the joint American-Emirati-Israeli statement, which announced the start of a path to normalization of relations, which includes a freeze on the decision to annex Israel to parts of the occupied West Bank". 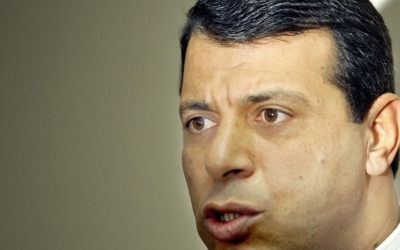 His supporters over the weekend called him "the leader".

The result? His picture was burned in Ramallah yesterday along with pictures of bin Zayed.

In the past, Dahlan has played the divisions between Hamas and Fatah shrewdly. For a brief spell there was talk of a rapprochement between Dahlan and Hamas, in a revived relationship with Yahya Sinwar, the Hamas leader of Gaza. Sinwar and Dahlan were former schoolmates. The two met in secret talks in Cairo.

All his previous work, including the payment of weddings in Gaza and the cultivation of supporters and militias in Balata Camp, the West Bank's largest refugee camp, has been thrown to the wind now. Dahlan has crossed a Rubicon by supporting this deal, although this fact has yet to sink in.

They have common enemies: Arab despots whose suppression of democracy is more cruel and medieval than ever. They have common cause - popular resistance to oligarchs who wield all the power - both military and economic.

Instead of investing its money in Jordan or Egypt which desperately needs its cash, the wealthiest sovereign wealth fund in the Gulf will start investing in Israel

Netanyahu was not exaggerating when he said on Thursday night when the deal was announced that recognition by the UAE would enrich Israel. "This is very important for our economy, the regional economy and our future," the prime minister said.

He said the UAE would make investments that would boost the Israeli economy. Well, quite. Instead of investing its money in Jordan or Egypt, which desperately needs its cash, the wealthiest sovereign wealth fund in the Gulf will start investing in Israel, which is in comparison already a substantial high-tech economy.

Not only is bin Zayed contemptuous of Arab democracy (hence his suppression of popular democratic movements). He is above all contemptuous of his own people, whom he consigns to the gutters of the new post-oil economy.

This bleak vision will fail, much faster than the Jordanian and Egyptian treaties with Israel, which too were built on sand. It can only lead to more conflict.

Whereas before, Israeli leaders could pretend to be bystanders to the turmoil of dictatorship in the Arab world, this now ties the Jewish state to maintaining the autocracy and repression around it. They cannot pretend to be the victims of a "tough neighbourhood". They are its main pillar.

This accord is virtual reality. It will be blown away by a new popular revolt not just in Palestine but across the Arab world. This revolt may already have started. 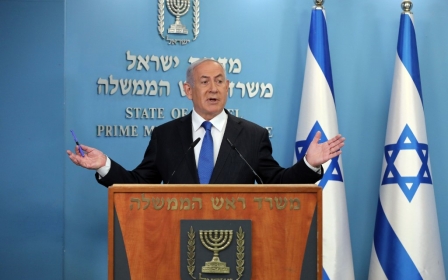 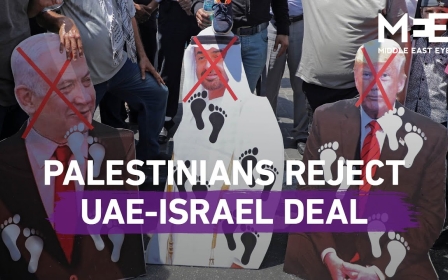 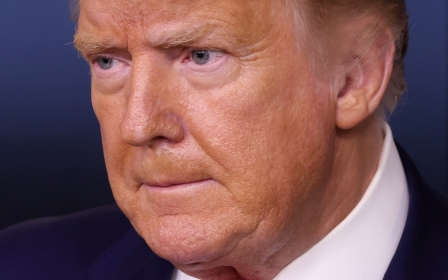