Massacre of Muslims: A town still in denial

Peter Oborne and Alastair Sloan
The situation in Srebenica is the exact opposite of that in Germany, which has fully acknowledged the Holocaust and apologised for the crimes committed by the Nazis 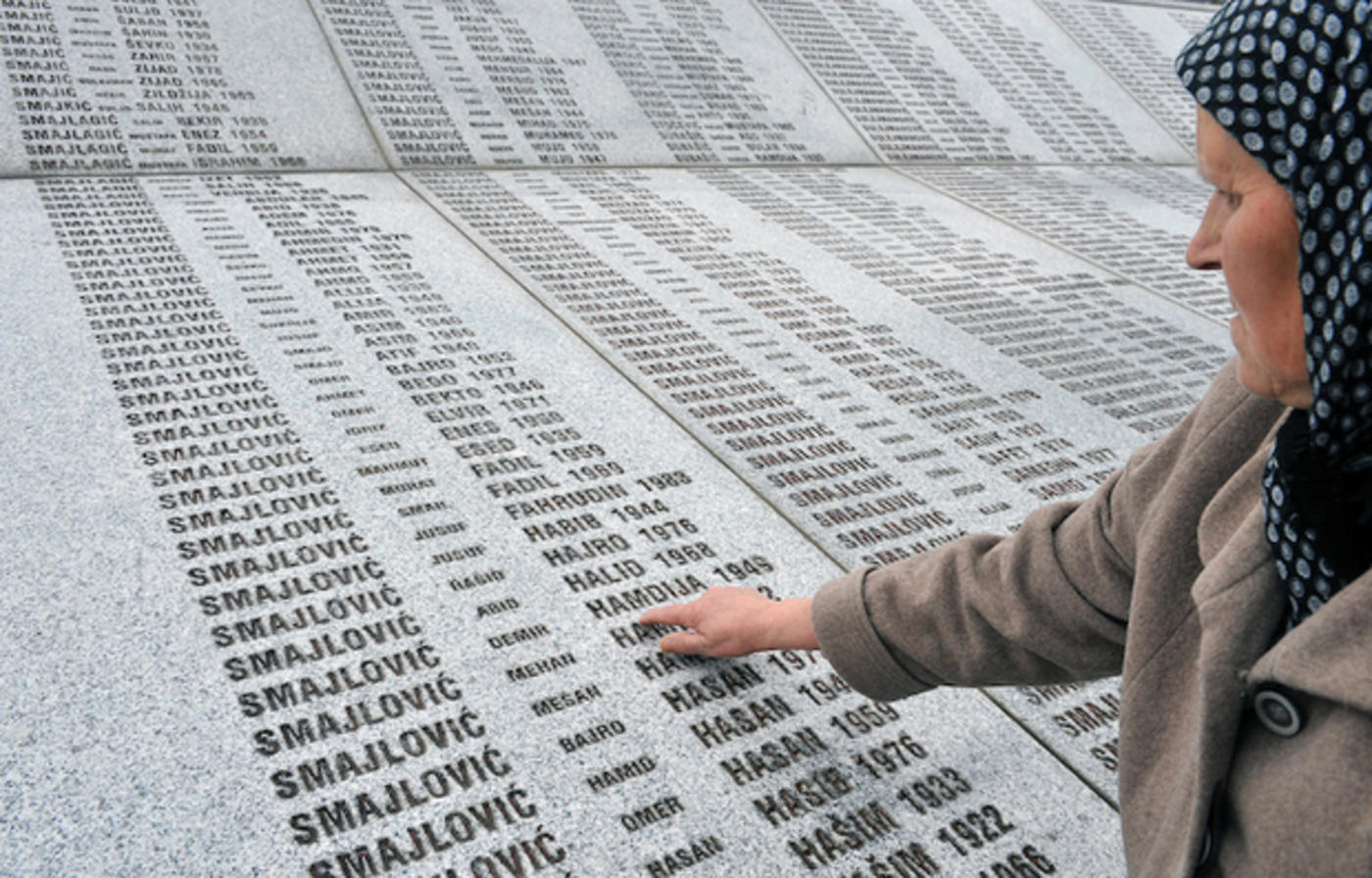 Once every year, the Mothers of Srebrenica host a ceremony to remember their fathers, sons, husbands and brothers who were hunted down and systematically murdered by Serbian forces on 11 July 1995. They were killed because they were Muslim.

This intensely moving event is held in the Potocari cemetery, where some of the 8,000 victims whose bodies have been found are buried. Many more are thought to remain undiscovered in the surrounding mountains.

The graveyard is opposite the United Nations base which was fatally abandoned by Dutch peacekeepers, a decision which gave the green light for the Srebenica genocide to take place.

Normally the ceremony is a restrained, dignified event, attended by prime ministers, political leaders and diplomats from around the world as well as local people.

But there is a sinister and frightening backdrop to next week’s commemoration.

Grujicic - whose father was a Serb soldier killed in the early days of the civil war – will not accept that the Srebenica massacres amounted to genocide.

'In a town where genocide was committed, having a genocide denier as a mayor is unacceptable'

- Munira Subasic, president of the Mothers of Srebrenica

Usually the mayor of Srebenica plays a major role in organising the ceremony. Not this year. Camil Durakovic, President of the Organising Committee and himself a former mayor, told us that "the mayor was not invited because he denies the genocide".

Munira Subasic, president of the Mothers of Srebrenica, told us that "anybody who denies genocide is not welcome in the memorial centre".

Subasic, 67, lost her son Nermin and husband Hilmo in the genocide. She said: "In a town where genocide was committed, having a genocide denier as a mayor is unacceptable."

The denial of genocide

How can it be that Srebenica has elected a genocide denier just two decades after the deliberate, cold-blooded massacre of more than 8,000 Muslims in this once sleepy Bosnian town?

It is as if Buchenwald or Belsen had elected a Holocaust denier as mayor in the aftermath of World War Two.

The answer is grim. The massacre of Bosnian Muslims (so-called “Bosniaks”) in 1995 worked only too well. 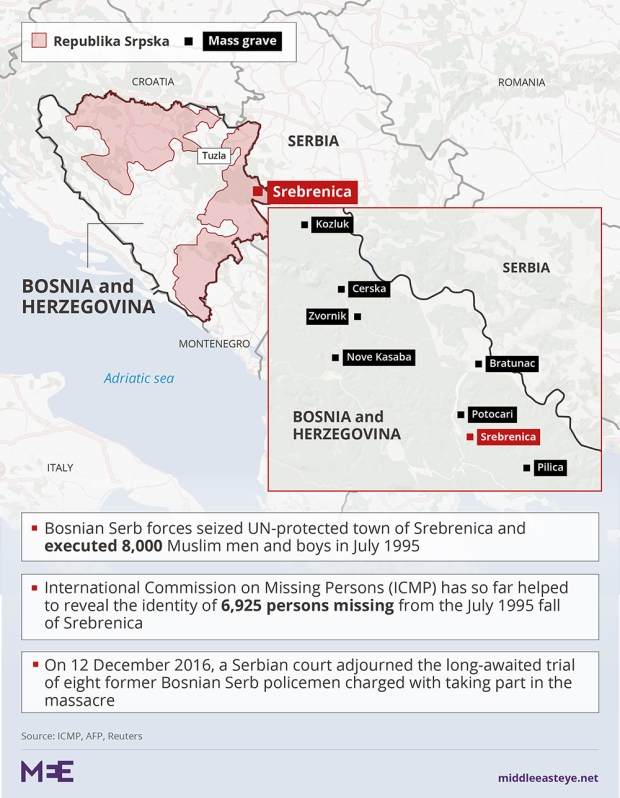 Srebrenica is located in the Bosnian Republika Srpska, hard by the border with neighbouring Serbia. The Serbs ethnically cleansed the area – today a largely autonomous Serb majority statelet within Bosnia -  during the civil war, and Bosnian Muslims who return have not been made welcome.

Most of the town's former Muslim residents are either dead or have emigrated. Srebrenica is now controlled by Bosnian Serbs, many of whom refuse to accept that a genocide took place.

Nedzad Avdic, a survivor of the genocide, told us: "Our first child is starting at the local school. They are being taught that the genocide never happened.

“You turn on the TV and it is like the war never ended."

'Our first child is starting at the local school. They are being taught that the genocide never happened'

- Nedzad Avdic, survivor of the genocide

Avdic was severely injured after he survived a mass shooting, and went into hiding for several days. He watched hundreds more killed as he hid in the undergrowth.

He told us that he and his family - his wife is another survivor -  tried hard to make a life in Srebenica.

Now they accept that they have no choice but to move away.

Mejra Dzogaz, whose sons were murdered in the hills around Srebenica, tells us that she regularly sees the killers around the town. Some hold offices in local government, others are senior figures in the local police force.

The situation in Srebenica is the exact opposite of that in Germany, which has fully acknowledged the Holocaust, honoured the victims, and apologised for the crimes committed by the Nazis.

Not so in Bosnia, where many Serbs remain in denial.

In April, Grujicic told local media that he had uncovered “a lot of evidence” that the graves in the cemetery where the memorial took place were fake - and that the victims they supposedly memorialised were still alive. “The list of victims should be revised and changed,” he insisted.

Grujicic was supported in his election campaign by another genocide denier, Milorad Dodik.

In 2010 Dodik said Srebrenica "did not happen", adding that "If a genocide happened, then it was committed against Serb people."
He argued that "women, children and the elderly were killed en masse" by Bosniak Muslims.
The fact that Dodik is also the president of Republika Srpska shows the extent to which genocide denial is integral to Serbian nationalism, more then two decades later.

Serb ultra-nationalists are an increasing presence in the town, according to former mayor Camil Durakovic, himself a Muslim.

In April, Grujicic said that he had uncovered 'a lot of evidence' that the graves in the cemetery where the memorial took place were fake

He fled from Srebrenica to Bosnian-held Tuzla during the genocide, only to be reunited with his father and older brother in the United States. Durakovic thought they had been killed, but instead they were transported to concentration camps in Serbia. He returned to Srebrenica in 2005.

Durakovic, who served as mayor from 2012 to 2016, says regular gatherings of Serb nationalists were common while he was mayor, but that his office would also denounce them every time they happened.

Now he accuses the new mayor of standing by while these rallies become larger and more frequent. He told us that "even every day in the town, I see people wearing Chetnik shirts, and flying flags," a reference to the Chetnik ideology of "Greater Serbia" that underlies Serb nationalism.

"The new mayor has given the Serb nationalists a space to operate in," the former mayor said. He said that hundreds of Serb radicals gather on Orthodox Christian saints days, singing and demonstrating adding that some come from across the border in Serbia, from across the river Drina.

Chillingly, Grujicic appears to have an ally in Donald Trump. The US president hosted the genocide-denying Srebrenica mayor at his Prayer Breakfast in Washington last February.

Taking into account Trump's anti-Muslim rhetoric, and that of his advisers and followers, the link could hardly be more alarming.

Alastair Sloan focuses on injustice and oppression in the West, Russia and the Middle East. He contributes regularly to The Guardian, Al Jazeera and Middle East Eye. Follow Alastair's work at www.unequalmeasures.com

Peter Oborne won best commentary/blogging in 2017 and was named freelancer of the year in 2016 at the Online Media Awards for articles he wrote for Middle East Eye. He also was British Press Awards Columnist of the Year 2013. He resigned as chief political columnist of the Daily Telegraph in 2015. His books include The Triumph of the Political Class, The Rise of Political Lying, and Why the West is Wrong about Nuclear Iran.

Photo: Bida Smajlovic, 64, survivor of July 1995 massacre in Srebrenica, stands at a memorial center in Potocari, on 24 March 2016, while pointing at the name of her husband, engraved among names of other victims of the massacre. (AFP) 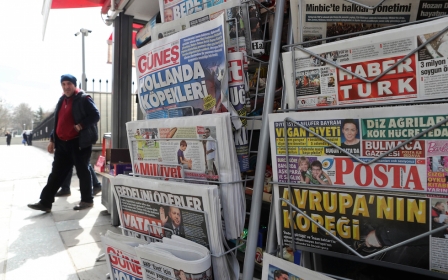 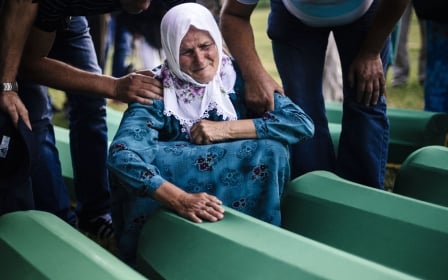 Human Rights
Diggers, denial and despair: The macabre story of the Srebrenica cover-up 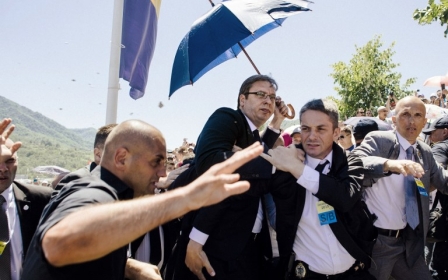