A milestone in the complex dialogue between Islam and Christianity

When the head of the Roman church representing 1.2 billion Catholics signs a joint declaration with the head of the highest seat in Sunni Islam, it ought to be big news.

Yet the significance of the declaration signed in Abu Dhabi this month by Pope Francis, head of the Roman Catholic Church, and Sheikh Ahmed al-Tayeb, Grand Imam of al-Azhar, has slipped under the radar amid criticism over the Pope’s decision to visit the UAE while it is involved in the war in Yemen and the blockade against Qatar.

But for those who have focused their attention on the contents of the document and the two leaders’ speeches, it is clear that the Grand Imam and the Pope have set a milestone in the complex dialogue between the two faiths.

The “Document on Human Fraternity” is the first ever signed by representatives of the two religions in which they pledge to work together for the benefit of the “human fraternity”. It implies the two faiths have found a common understanding and a united front against attempts to abuse God’s message and manipulate religion.

“We resolutely declare that religions must never incite war, hateful attitudes, hostility and extremism, nor must they incite violence or the shedding of blood,” the document states.

“These tragic realities are the consequence of a deviation from religious teachings. They result from a political manipulation of religions and from interpretations made by religious groups who, in the course of history, have taken advantage of the power of religious sentiment …. This is done for the purpose of achieving objectives that are political, economic, worldly and short-sighted.”

Both Sheikh al-Tayeb and Pope Francis have launched a joint appeal to political and religious leaders, intellectuals, artists and media worldwide to reject violence in all its forms, promote positive values and strive for establishing a more righteous and peaceful world - not only for the benefit of believers of the three monotheistic faiths, but also for non-believers.

Questioning the East-West dichotomy, the two leaders warned that religious hatred is causing 'signs of a third world war being fought piecemeal'

“The fact that people are forced to adhere to a certain religion or culture must be rejected, as too the imposition of a cultural way of life that others do not accept,” the declaration notes.

Questioning the East-West dichotomy, the two leaders warned that religious hatred is causing “signs of a third world war being fought piecemeal”, and committed to pursuing a path of dialogue and mutual cooperation.

Vatican insiders said both leaders felt strongly about the content of this declaration, whose text went back and forth between Rome and Cairo before being jointly approved. “We will either build the future together or there will not be a future,” Francis said in Abu Dhabi.

The two leaders have grasped this reality, but will their communities follow suit?

The European Muslim Leaders Majlis has endorsed the declaration and committed to promote its contents. In a statement, al-Tayeb made specific reference to Muslims living in the West, urging them to “integrate in a positive way in your host countries, claim your religious rights if you need to, but always abide by the laws of the country where you live".

He also touched on the issue of Christian minorities and their struggle for survival in the region, noting: "Embrace, protect the Christians living among you as they are the closest to us, because they protected us when Islam was persecuted."

Fully alert to the risks posed by the manipulation of the religious discourse by extremists on both sides, Francis and al-Tayeb are trying to set the bar for believers of both faiths, but are meeting harsh criticism.

Francis’ policy towards Islam - including his refusal to associate religion and violence - has its foes among nationalist policymakers, as well as within the Catholic establishment. Cardinal Raymond Burke, one of the leaders of the conservative wing, has openly argued that Islam represents a real threat to Christianity.

Opposition comes especially from ultraconservatives across the Atlantic, supported by powerful lobbies who believe that, for as long as dialogue with Islam won’t be possible, there will always be an opportunity for war, as a Vatican source put it.

The declaration is now stirring opposition from other prominent voices, who accuse Francis of creating confusion around the tenets of the faith for asserting that “the pluralism and the diversity of religions” are "willed by God in His wisdom".

In the meantime, al-Azhar is attempting to address both the challenges posed by extreme thinking on one side and modernity on the other. The spreading of extremist religious thinking has spawned jihadist groups who have threatened not only the survival of indigenous Christian communities and other faiths, but also that of centuries-old spiritual practices within Islam, such as Sufism.

The growing influence of extremist religious discourse - among other factors, including the West's foreign policy blunders in the region and its support for dictatorships, economic instability and modernity's spiritual void - has fuelled the popularity of groups such as the Islamic State.

By injecting funds into the institution, the Saudis have long tried to shift the balance towards their own theological school

To counter these developments, al-Azhar, under al-Tayeb’s leadership, has strived to address the relationship between Islam and government, acknowledging that the state can manipulate religion as much as religion can manipulate the state.

Critics have seen this as an attempt to bring faith under the spiritual sphere as opposed to the political one, setting al-Azhar on a collision course with Islamic scholars who support political Islam.

The Vatican has found in al-Azhar, the highest seat of Sunni Islam, a willing counterpart and  interlocutor within the composite Islamic world that could speak for the majority of Muslims. But it remains to be seen how comprehensive the front is that supports al-Tayeb.

At times, Al-Azhar’s reputation has been tainted by its relationship with the Egyptian regime, despite reports of a dispute between al-Tayeb and the Egyptian president. It, however, continues to struggle to uphold its independence with regards to both the state and Saudi interference.

By injecting funds into the institution, the Saudis have long tried to shift the balance towards their own theological school. At the same time, the advent of social media has propelled to the forefront of religious debate a new generation of scholars who appeal to younger Muslims.

Sunni Islam today is practiced by some 1.5 billion people worldwide, while Catholics represent more than half of the 2.2 billion Christians. 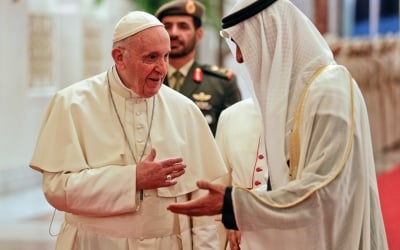 It is projected that Europe’s Muslim population will grow from 44 million in 2010 to 58 million in 2030. Despite being relatively free to profess and practice their faith, Muslims face increasing discrimination and Islamophobic attacks which fuel a sense of estrangement, according to recent studies conducted by the European Union Agency for Fundamental Rights.

At the same time, Christians in various Middle Eastern countries are fleeing wars, persecution and economic instability. Dozens of churches or church-owned structures have been destroyed in Syria, where half of the country’s 1.5 million Christians have fled the war, according to the Chaldean bishop of Aleppo, Antoine Audo.

Chaldean Christians numbered 1.5 million in Iraq before the 2003 US invasion of that country and the fall of Saddam Hussein, but their numbers have since plummeted to less than 500,000, according to Chaldean Patriarch Louis Raphael I Sako.

In Egypt, where Christian Copts represent more than 10 percent of the population, they are the target of discriminatory policies and terrorist attacks. The situation has been worse under President Abdel Fattah al-Sisi, whose crackdown on civil liberties and freedom of expression has hit Christians and Muslims alike.

Both Sheikh al-Tayeb and Pope Francis preside over the spiritual life of about a third of the world’s population, and their stance on interfaith dialogue could have long-lasting consequences. To address the challenges of the present, they have both looked at the past, to the historic meeting of Saint Francis of Assisi with the Sultan of Egypt, al-Malik al-Kamel Nasr-addin, eight hundred years ago at the peak of the Crusades.

Then as now, the encounter forever changed the two men’s perception of each other. Now as then, both Francis and al-Tayeb know that as long as dialogue prevails, they have a better chance to avoid conflict.

Barbara Bibbo’ is an Italian journalist who has been living and working in the Middle East for the past 20 years. She has been a producer at Aljazeera English between 2008 and 2015, doing extensive research on international issues and world leading figures for the Talk to Aljazeera show. Barbara started her career in print, as a correspondent for Il Messaggero Veneto, the Gulf News and Italian News Agency ANSA from the Gulf region. Her interviews and articles have also appeared or been quoted by El Pais, Repubblica, the New York Review of Books, La Voce di New York and other publications worldwide. 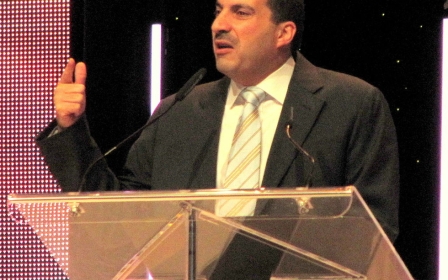 Inside Egypt
Egypt's televangelists tailor their message: See no evil and life will be good
Rania al-Malky 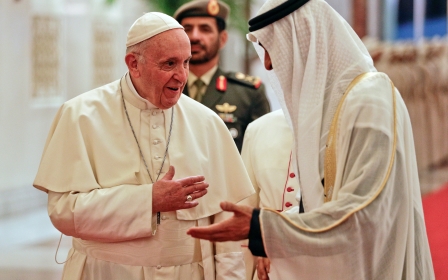