Moving US embassy to Jerusalem would tear apart international order

Hani al-Masri
Relocation could spark popular Palestinian uprising, which would reverberate around world 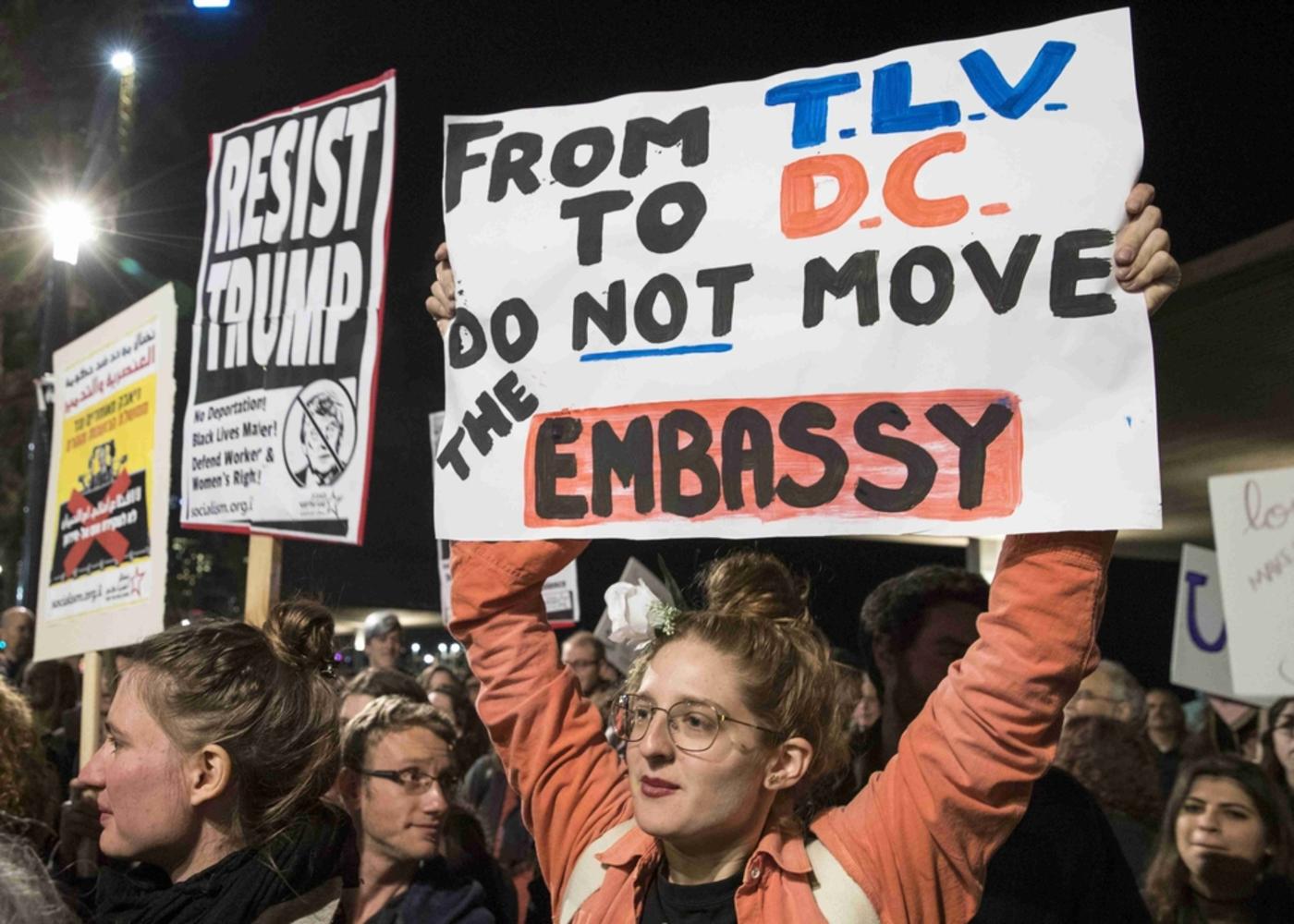 Donald Trump has now taken charge of the US presidency. He is threatening to radically change the rules of the game, not only in the Middle East, but around the world.

Anticipating the policy that he will adopt towards the Palestinian issue – be it positive or negative - is important in order to ready a response.

Trump is unpredictable and his stance on issues is often unclear. He is neither traditional nor ideological; he has no previous political experience.

Trump is unpredictable and his stance on issues is often unclear. He is neither traditional nor ideological; he has no previous political experience

During his election campaign, he exhibited warm sympathy toward Israel. There was one exception to this when, during his bid to win the Republican nomination, he announced that he would adopt a neutral position between the Palestinians and the Israelis and that he would seek a fair agreement amenable to all.

As a result, he was subjected to a fierce campaign by Israel and by its friends and allies in the US. Since then, he has taken the reverse approach, adopting extremely pro-Israel rhetoric.

READ: Imagine a world without Palestine

Trump has repeatedly promised to move the US embassy to Jerusalem and said that Jewish settlements were not an obstacle to peace, that negotiations between the two sides should proceed without any outside intervention.

Furthermore, he said that Palestinians should fight terrorism before a peace deal can be discussed. Trump also opposed the recent UN Security Council resolution on settlements and tried to intervene to push the Obama administration to veto the resolution. The White House refused.

Trump has appointed a team whose members are almost all known for their open bias towards Israel; two of them are Zionist, including his own son-in-law, Jared Kushner, an Orthodox Jew, who he aims to use in peace efforts. Indeed, on the eve of his inauguration, Trump told Kushner: "If you can't produce peace in the Middle East, nobody can.”

He also nominated his friend David Friedman as ambassador to Israel. Friedman is a strong supporter of the settlements, to the extent that he donates annually, playing a direct role in their expansion. Friedman also strongly supports moving the embassy and has decided to live in his Jerusalem residence when he arrives in Israel to take up his post.

Relocating the embassy would constitute a change in the rules of the game and the foundations that have anchored the so-called peace process since its launch decades ago.

Attempts are underway to try and bypass the gravity of what this could mean, such as proposing that the embassy move to west Jerusalem, claiming it would be Israel’s capital in any final settlement meeting with Palestinian approval.

This claim is refuted by the argument that Jerusalem is already united and has been declared a united eternal capital of Israel.

Another suggested means of deception would see the embassy remain in Tel Aviv, while the US ambassador carries out his duties from one of the three American consulates in Jerusalem.

This would be an act of subterfuge, since the location where the ambassador works is what symbolises the embassy, rather than the building itself.

Moving the embassy would amount to a blatant attack on national Palestinian rights and on the rights of Muslims and Christians alike, considering the tremendous spiritual significance of Jerusalem to both faiths.

It would destroy the international convention regarding Jerusalem, namely UN General Assembly Resolution 181, which was passed in 1947 and asserts the status of Jerusalem as a separate entity.

It would undermine the Jordanian Hashemite mandate over the holy shrines in Jerusalem as stated in Article Nine of the Jordanian-Israeli peace treaty of 1994.

It would constitute a serious violation of international law and a deviation from the fixed policies of the US since the conflict erupted.

It would be a violation of the UN Security Council, which has passed six resolutions on Israel regarding Jerusalem.

It would be a violation against the advisory opinion issued by the International Court of Justice in 2004 regarding Jerusalem.

It would be a violation against the many UN Resolutions issued, the most recent of which was Resolution number 2334 in December 2016.

And it would mean the renunciation of international agreements, including the Oslo Accords of 1993 as well as previous obligations to which the US is a party.

If the US moves its embassy, it will no longer play the role of a broker or mediator in peace process negotiations. Such a development should be regarded in light of what might follow.

For example, US aid to the Palestinian Authority might be suspended, attempts might be made to change or amend previously adopted UN resolutions supporting Palestinian rights.

Moving the embassy cannot pass peacefully, especially since it is unlikely to be an isolated step by the new US administration

Moving the embassy may well lead to the eruption of a popular uprising, which would reverberate around the world and generate global sympathy and support for the Palestinians.

The visit by then-opposition leader Ariel Sharon to the al-Aqsa Mosque in Jerusalem in 2000 resulted in the Second Intifada, an uprising that lasted more than four years, leaving behind much death, destruction and suffering. Moving the embassy would not pass without sparking similar, or even worse, repercussions.

The continuous encroachment of the occupation and the rise of Israeli extremism, amid the widening gap between the Palestinian people and their leadership, would pave the way, once more, for a strategy of resistance.

This may also lead to the emergence of groups similar to Al-Qaeda or the Islamic State.

The challenges and dangers on the horizon, as exemplified by the embassy move, would undoubtedly prompt a significant Arab, Islamic and international response. 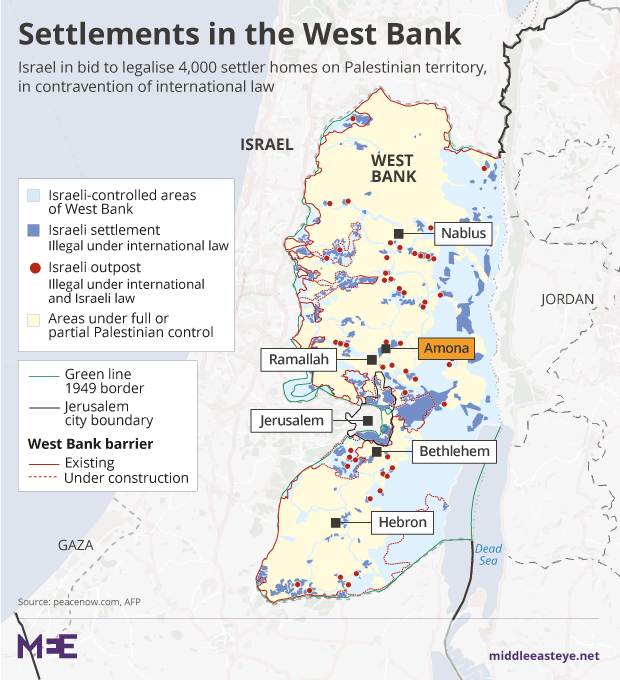 There is already a global front against Trump’s policies, which are seen to represent a coup and a revolt against the rules that govern the international system. There is a need to progress with current rules, rather than regress.

Moving the embassy cannot pass peacefully, especially since it is unlikely to be an isolated step by the new US administration.

READ: Trade with Israeli settlements should not exist

Israel will endeavour to exploit the Trump presidency to implement its plan for establishing a “Greater Israel”, by means of annexing vast areas of land on which settlements are built, the whole of Area C – and perhaps, even, the entire West Bank.

It will leave what remains in partitioned islets, separated from one another within the framework of "autonomy" under Israel’s hegemony.

Photo: Demonstrators outside the US embassy in Tel Aviv on 21 January 2017, including those opposed to the mooted embassy move (AFP) Trump
US embassy move to Jerusalem a declaration of war: Muqtada al-Sadr