Lebanon's unfinished revolution: Where next?

Rima Majed
Without a guiding theoretical and political project, Lebanon's October uprising will continue to suffer from a lack of vision 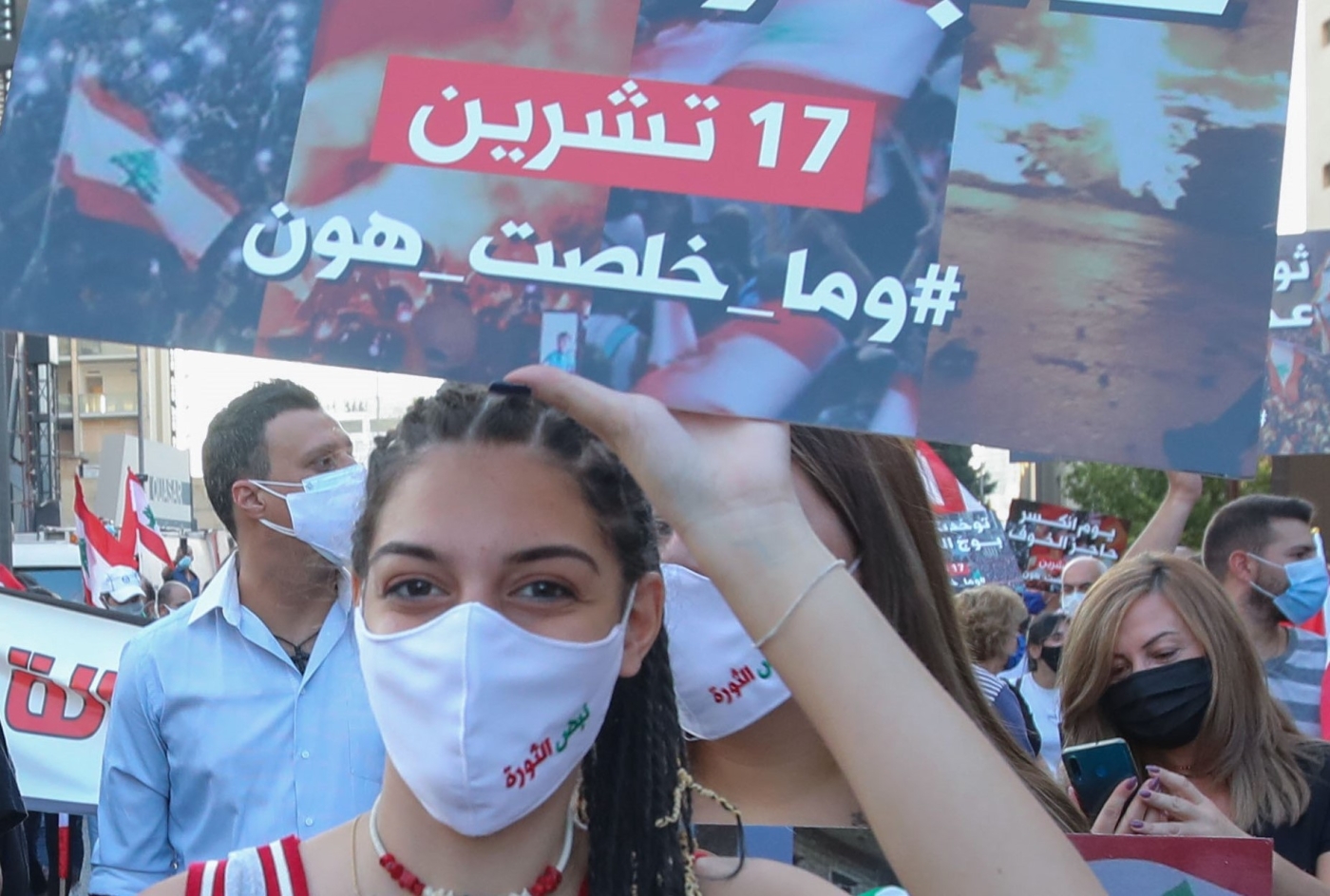 The date 17 October, the day protests broke out in Lebanon a year ago, is not an anniversary to commemorate - at least not yet.

This is not to say that we should not mobilise in the streets if we want to, or that we should not remember the magical days we witnessed last year. It is also not to reject a culture of celebration, or to disregard the importance of symbolism in social movements.

Mobilise if you wish, celebrate if you can, or disregard it and carry on. But whatever you do, remember that this is an unfinished revolution

On the contrary: mobilise if you wish, celebrate if you can, or disregard it and carry on. But whatever you do, remember that this is an unfinished revolution. The imperatives of anniversaries, and the pressure this creates in terms of expectations, can be unbearable - particularly in the context of overlapping local and global catastrophes that have transformed our lives and our revolution in radical ways.

My refusal to mark 17 October as an “anniversary” stems from concerns over commodification, displaced temporalities and reactionary impulses. Historical events are usually commemorated once they are over, not while they are unfolding; otherwise they risk becoming celebrations that resemble Valentine’s Day or Mother’s Day, marking an abstract ideal and potentially becoming highly commercialised.

The “packaging” of a revolution into a single date is often based on a view that approaches it as an event rather than a process.

While these two approaches are not necessarily mutually exclusive - revolutions are indeed both events and processes - the overemphasis on the short term, along with the commodification of the event into a rigid symbol that takes the form of a date, calls for an evaluative paradigm based on a success/failure binary.

In that sense, many critics or opponents have already rushed to declare the failure of the uprising, while some enthusiastic supporters view the anniversary as an occasion for a “comeback” in a reactionary way, to insist on their presence and continuation. While an evaluation of any movement should be ongoing and continuous, declaring the failure of the uprising is premature, unless one adopts a very narrow measurement based solely on immediate regime-toppling.

On the other hand, the enthusiasm of some revolutionaries and their high hopes and expectations for the anniversary can be a slippery slope. The clock is surely ticking, but we need not become prisoners to the concepts of time and date that are imposed upon us.

Instead of playing by the rules of anniversary fetishism and event packaging, the passing of a year since the start of Lebanon’s revolutionary uprising is a moment to reflect on its ebbs and flows, and to recognise the exceptionality of the coincidence of a revolution with a pandemic, financial free-fall, and one of the largest explosions in history - all in the span of 10 months.

As the revolution completes its first trip around the sun, questions around what it has achieved and where it has failed have surfaced again among “supporters”. In this important discussion, opinions ranging from mockery to harsh criticism have been circulating on social media, with a heavy focus on blaming individual “activists” for their shortsightedness or their mistakes.

Yet, a full evaluation cannot merely focus on individual blame, without a reading of the historical conditions that shaped and moulded the trajectory of this uprising. In criticising activists as neoliberal subjects who are unable to organise and take over, “radical critics” are indirectly adopting a similar neoliberal lens, too focused on individuals rather than a serious discussion of material conditions and actual possibilities.

What does it mean today to be a revolutionary in the Lebanese context? How do we fight a “full-time regime” when we are part-time revolutionaries? Most people active in the uprising can only be so during their spare time, when they do not have to work or take care of domestic chores and obligations. Not only is this heavily gendered, it is also heavily class-based.

In fact, what made the 17 October moment revolutionary was its ability to impose a complete shutdown of the country through road blockades and strikes. This allowed people to mobilise in huge numbers, filling streets and squares across the country. But this initial moment cannot be sustained for a long time, especially in the context of financial collapse. Work and concerns about everyday life took precedence for most protesters.

Moreover, what does it mean to be a revolutionary in the context of a society that has undergone decades of neoliberalisation that transformed our activism models into NGO-style campaigns, with a heavy focus on individualism, both in terms of ideology and organisation?

One can blame individuals for being individualists, or campaigns for being shortsighted, or organisations for being ridiculously “unorganised” - but one can also look at the reasons why that is the case, and think of the difficulties of building a ship while already swimming against high tides.

Questions around the role of older leftist or progressive political parties and groups, and pre-existing labour unions that have not played an important role in the uprising, are also crucial and reflect pre-existing organisational weaknesses. In addition, while previous resistance, liberation or progressive movements in Lebanon have been funded and supported by regional and global regimes (from the Soviet Union to Muammar Gaddafi’s Libya to Saddam Hussein’s Iraq), current revolutionary movements are operating without such backing from external patrons, making it more difficult to mobilise resources - but more promising as political projects.

Overall, a year into the revolutionary uprising that started in October 2019, it is safe to say that activists and their critics are both heavily tainted by neoliberal subjectivity that is struggling to move beyond individualist analyses.

After the first wave of the Arab uprisings, some commentators noted that these revolutions lacked revolutionaries. This came in the context of heated debate over whether these social explosions could classify as revolutions if they did not topple a regime and its structure, and over whether we should refer to them as revolutions, uprisings or mass mobilisations.

A similar discussion is now taking place in the Lebanese context, where some insist on referring to what started last October as a revolution, while others refer to it as a mobilisation or uprising. The nuance lies in the definitions adopted to delineate what constitutes a revolution.

If we consider that revolutions can only be labelled as such once they succeed in overthrowing a regime, we must then accept that the start of a mass mobilisation process that threatens to overthrow the regime is at least a “revolutionary uprising”. These mobilise revolutionaries, rather than merely “activists”.

Revolutionaries are often ordinary people transformed by that moment, turning against the status quo

Revolutionaries are often ordinary people transformed by that moment, turning against the status quo. Their core problem remains in developing a revolutionary theory to further develop their revolutionary project and better organise their struggle.

Without the advancement of a theoretical and political project to guide the revolutionary uprising and its people, Lebanon’s October revolution will continue to suffer internally from a lack of vision and organisation, and a naive quest for unity. The revolution must become “revolutionary” before it can choose its allies and unite fronts where necessary.

Until then, the revolutionary process will be shaped by social and historical transformations, as well as by internal conflicts and contradictions.

Rima Majed is Assistant Professor of Sociology at the Department of Sociology, Anthropology and Media Studies at the American University of Beirut. 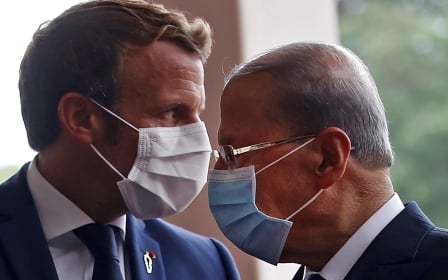 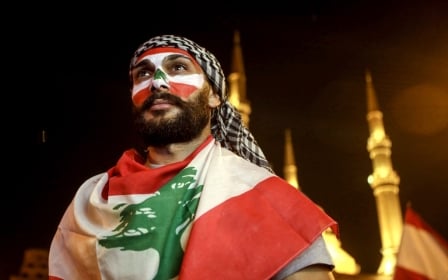