Love letters to Palestine: In search of decolonial justice 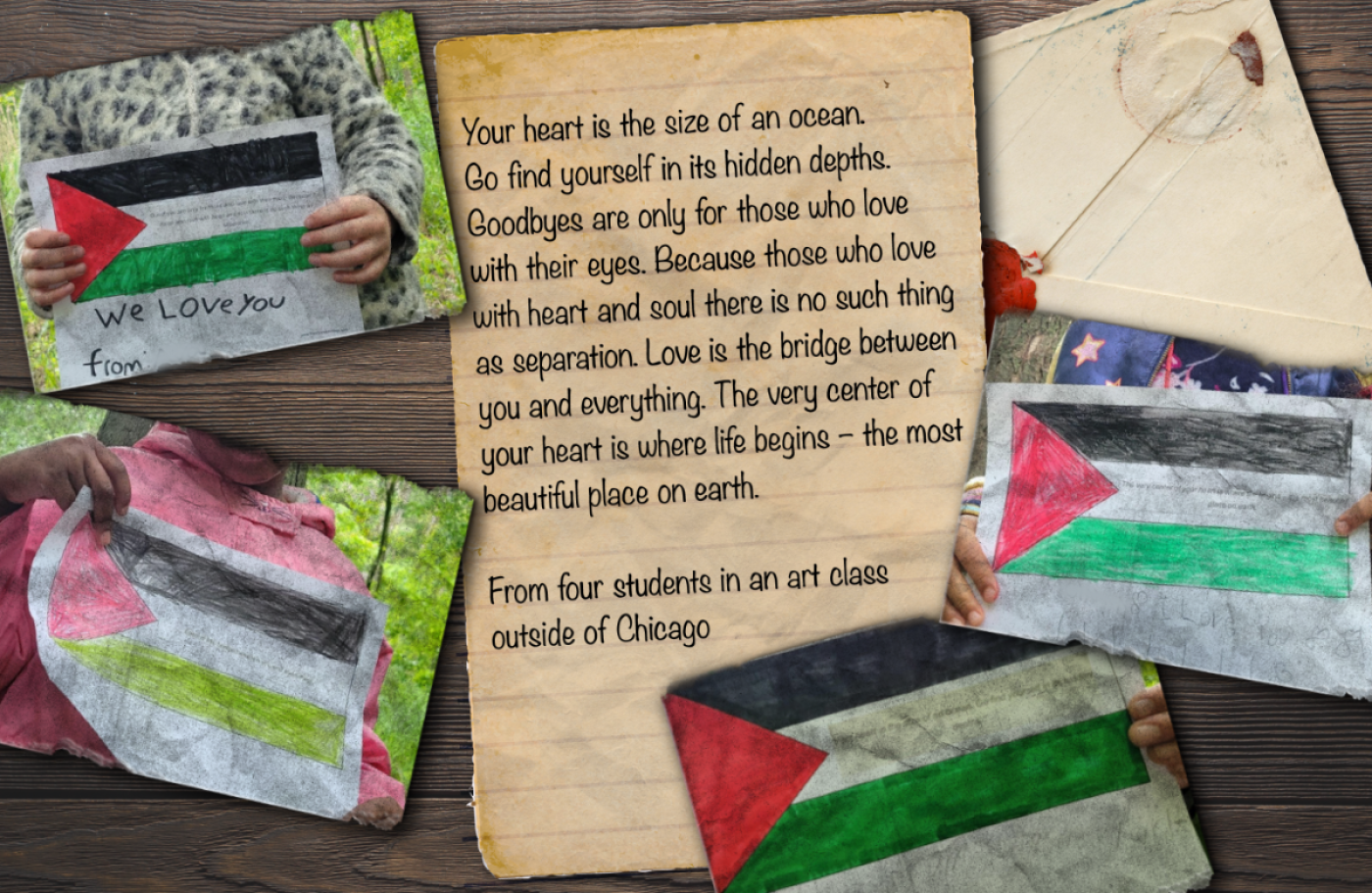 Palestine exists, and our existence is our resistance. We survive and work towards healing, in spite of the weapons of mass deconstruction that target our everyday lives with all the resources of colonialism, because we are - as activist Assata Shakur reminds us in her powerful autobiography - “weapons of mass construction”.

In this spirit, we, three Palestinian mental health workers and psychologists, reached out to our communities transnationally and solicited letters of mass love for our beloved Palestine in the face of mass Israeli colonial conquest, and the complicity of governments worldwide. 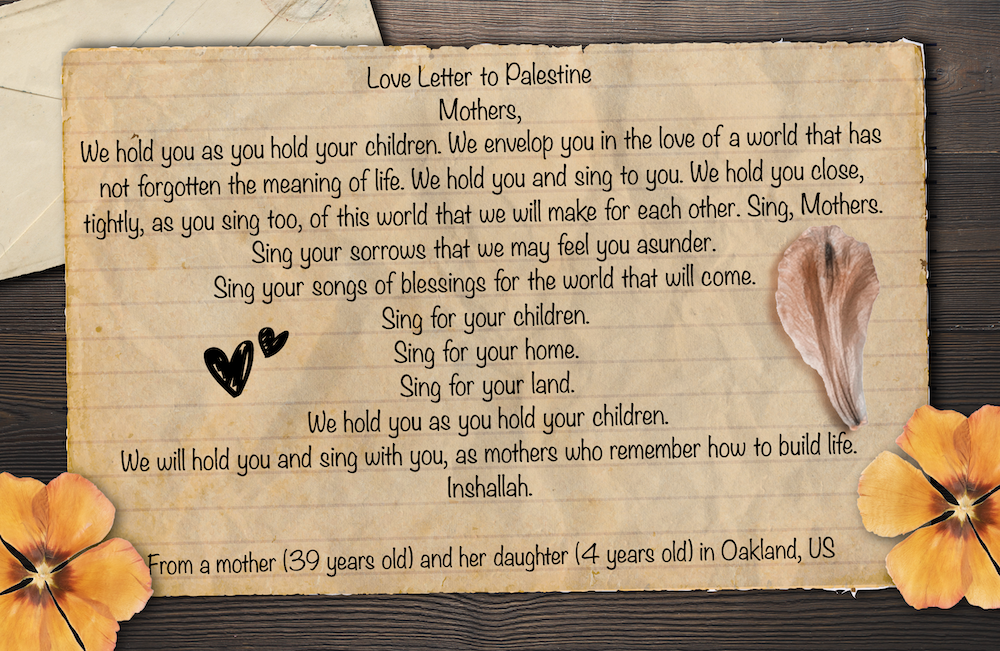 We were inspired by our dear friend and colleague, psychiatrist Yasser Abu Jamei in Khan Younis, who sent us a letter during Israel’s 11-day bombardment of Gaza and the uprisings across Palestine this past May.

He addressed his words not only to us, but also to the international community: “how long will the People of the World just sit idly by while we here in Gaza suffer like this?” he wrote. “The people of Gaza need more than just statements and resolutions, while Israel receives the arms which are killing and terrorizing us … Our current living conditions under the siege are an affront to human dignity. I tell my children and my clients, ‘we Palestinians have the right to live as any other people in the world: to live in peace, in dignity and to enjoy our rights. It will come.’”

As Abu Jamei explains, Palestinians live under intolerable circumstances, with Israel enabled to perpetrate settler-colonial, racially supremacist violence. Standing against racism means standing against settler-colonialism. It means standing with decolonisation - and where there is colonisation, there is also decolonisation. Where there are Palestinians, you can also find our intifada attitude, our dignity and our decolonial love, never too far away. 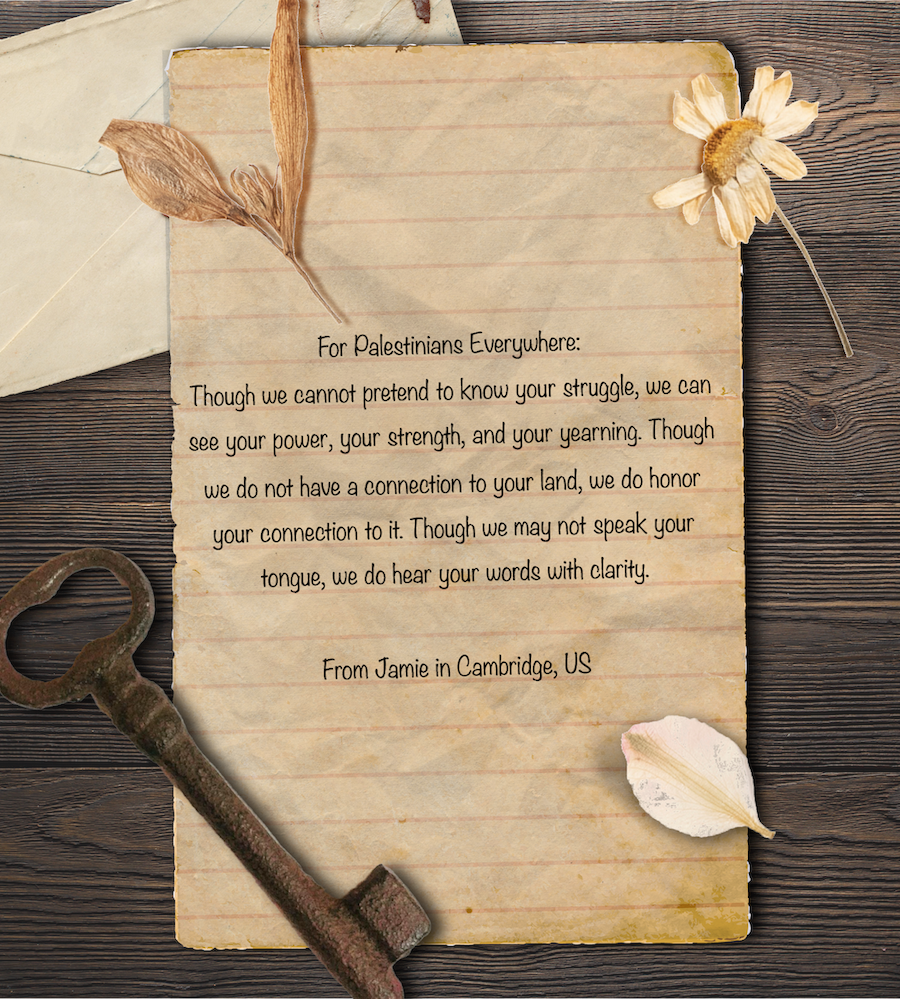 Over the past several months, our decolonial love has been on full display in unparalleled ways. The Palestinian people have experienced moments of united movements, and we will never forget what that feels like - what collectively dreaming a new world into existence feels like.

Palestinians - whether in Bethlehem or Haifa, al-Khalil or Akka, Nablus or Nazareth, Ramallah or Gaza City, Lod or Lebanon, Jordan or Boston, Chile or France - all know we can come together to bridge our forced separations and renew our decolonial struggle. Palestine is not alone; the letters we received echo this decolonial love. We received dozens of love letters dedicated to Palestine from our families, friends and colleagues.

Colonisers tell us that Palestine is dead and buried, but we know otherwise, and we are moving towards more aliveness. Like our radical Black sisters and brothers, we Palestinians are time-travellers too. We go into our past and our future often. We see ourselves rising beyond this sunken place. We see ourselves living with dignity and freedom in the future that is coming.

In this future place, after we have harvested our freedom, we turn around and look at the people next to us - because nothing happens in isolation. We stand in full appreciation of the Black Lives Matter (BLM) activists rising and teaching us. BLM changed the terms of the conversation on Palestine. 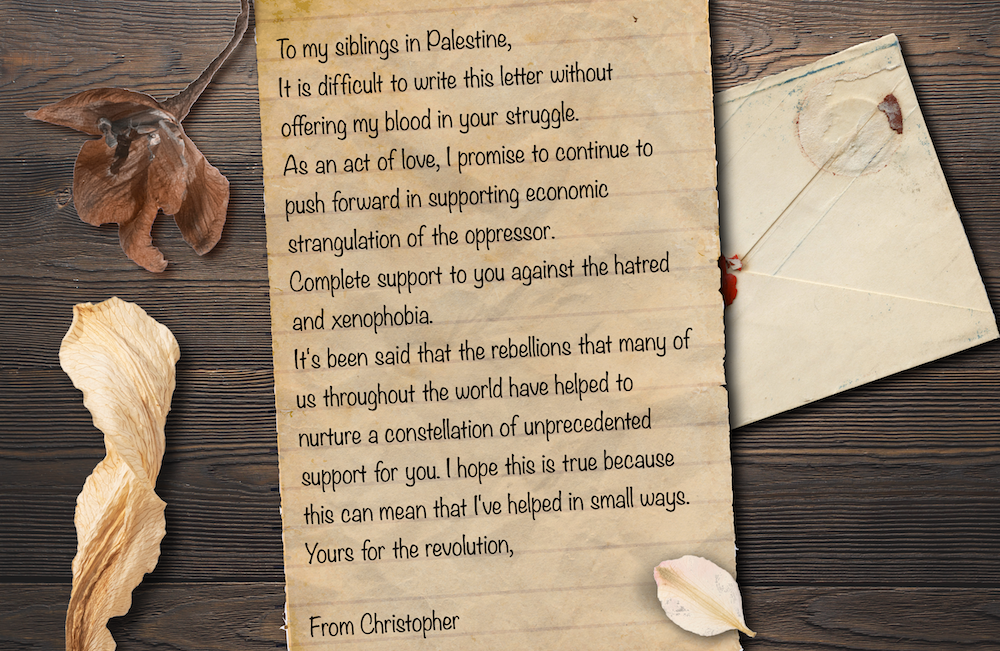 The recent protests in Colombia also changed the terms of the conversation on Palestine. Around the globe, together, we are tearing off the white-consciousness governing tape binding the world. We are no longer using colonial terms to structure our thinking and our movements.

When we Palestinians see Israeli military forces repressing our people in our homeland, we think about US police killing Black people with impunity, and we remember our own footsteps in the streets of Boston in the summer of 2020, in solidarity with BLM.

We think of police in Chile repressing activists who rose up in Santiago a couple of years ago. We see all the connections; as Adrienne Maree Brown writes in her love letter, we throw all our magic together, and we lift our hearts to the horizon. 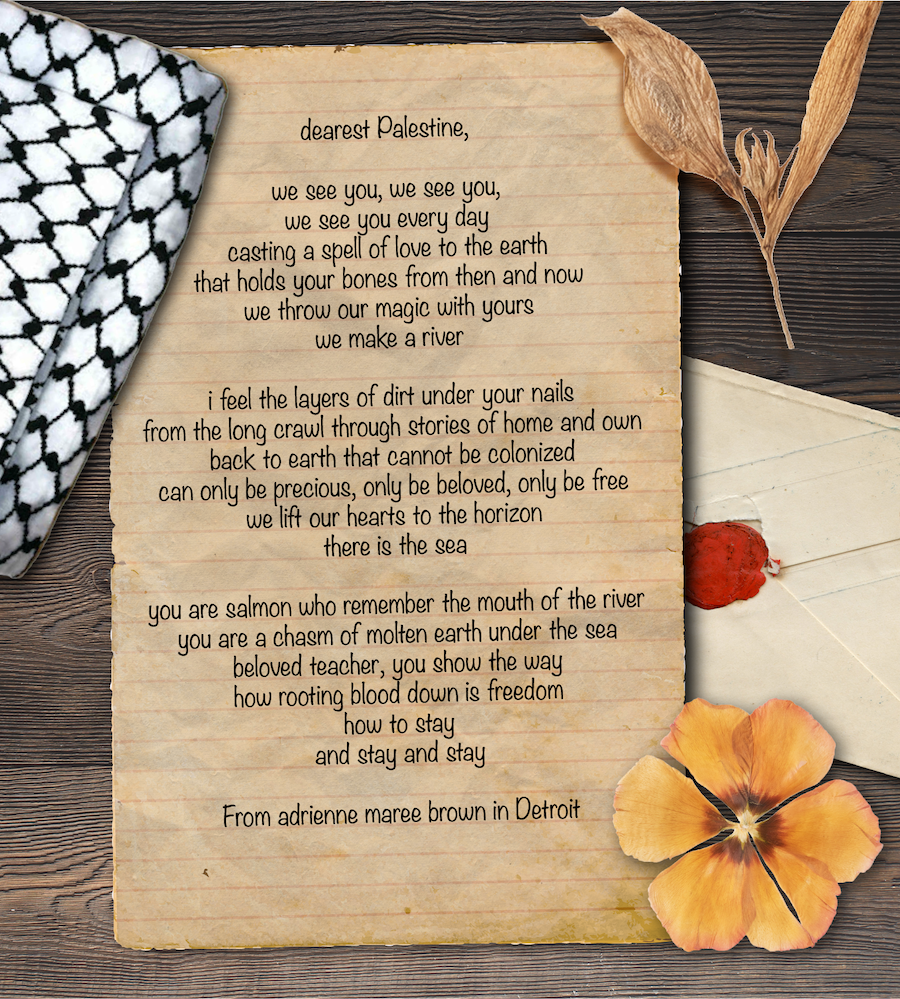 Beyond this horizon, we Palestinians have laid down the colonial logics of white-stream narratives that reign throughout the news media. We have tossed them into the river. For us, there are no “two sides”; no “conflicts”; no “good people on both sides”; no “clashes” between protesters and police or military.

We Palestinians see through these colonial headlines. We know we are fighting for our lives against bombs and bullets, and against white supremacist ideologies - weapons of mass destruction that dismember us, pushing us outside the limits of humanity.

The medicine is truth and courage, enabling the world to see Palestinians as fully human, with dignity and freedom

To Israel, and to many European and Euro-American power brokers, we are easily invisibilised - killed, detained, deported, erased - not because we are weak, but because we are colonised. And in our colonial condition, we belong to all the peoples of colour of the world - especially those who have been unpeopled.

In this site of non-belonging, we know that we are not treated like humans by our colonisers. We are not even treated like animals; we are treated more like ghosts. To the colonial Israeli nation-state, we Palestinians cannot make any legitimate claims to lands or to rights - not in Sheikh Jarrah, Gaza, or anywhere else. Jewish Israelis can make claims to lands from hundreds or even thousands of years ago, but we Palestinians often cannot even make a claim to the autotomy of our own bodies, let alone to anything under our feet.

Still, we stay soumoud and the fire of transnational solidarities helps to keep our flame ignited. 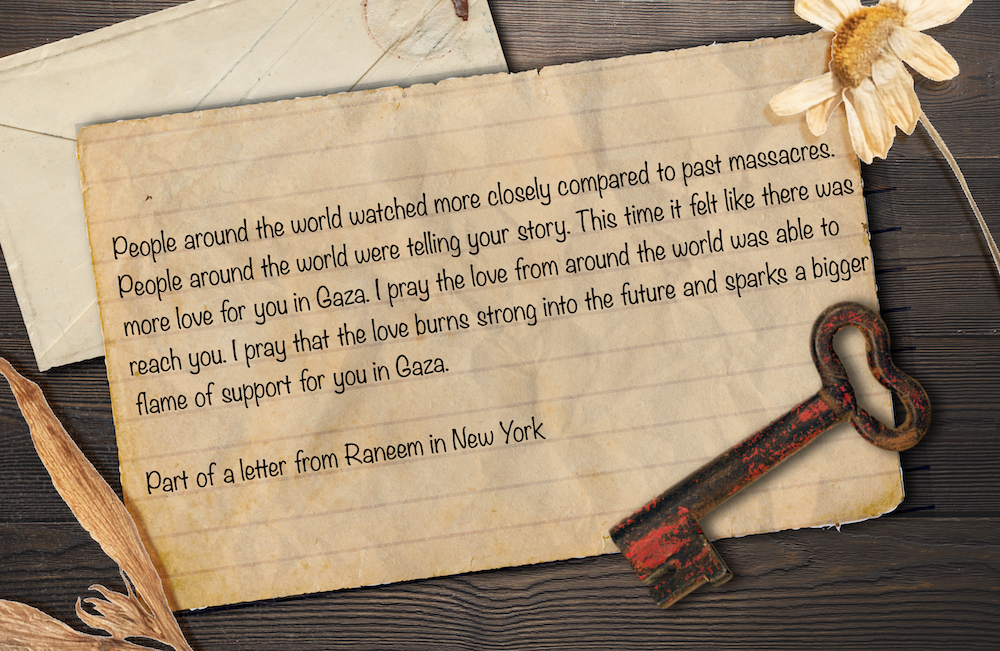 After soliciting love letters for Palestine from our communities, we chose a few of our favourites to disseminate throughout this article. The authors highlighted the unbearable trauma and psychological turmoil that Palestinians in Gaza must endure, in addition to the physical destruction that occurs.

To that end, we return to Abu Jamei’s letter, in which he noted that mental health treatment for Palestinians locked within colonial conditions does not come in a pill, or through an elaborate psychiatric regime. Rather, the required remedy is love and anti-racist resistance to colonisation.

The medicine is decolonial justice, including concrete political action to end not only the deadly bombing raids, but the entire Israeli occupation of Palestine and the siege of Gaza. The medicine is truth and courage, enabling the world to see Palestinians as fully human, with dignity and freedom. We must work together to forge this world into existence, acknowledging that we are both the wound and the medicine. We can indeed be decolonial justice; we can be the remedy. 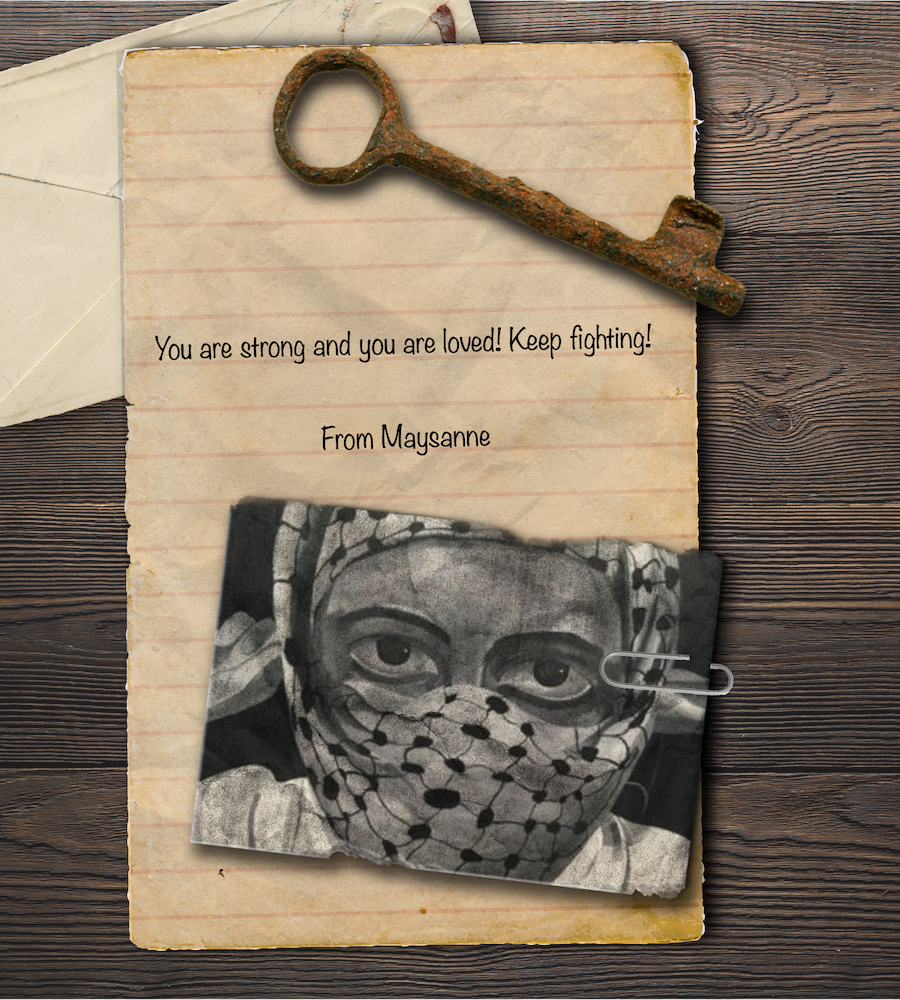 Devin G. Atallah
Devin G. Atallah, PhD is an assistant professor with the Psychology Department at the University of Massachusetts Boston. Atallah aims to engage decolonising, narrative, and community-based participatory approaches to critical inquiry, primarily within his long-term partnerships with communities in Palestine, communities of colour in Boston, and Mapuche communities in Chile.
Lana Andoni
Lana Andoni, M.S. is a graduate student pursuing a doctorate in Clinical Psychology at the University of Massachusetts, Boston. Lana’s research focuses on childhood mental health and neurodevelopmental disabilities.
Hana R. Masud
Hana R. Masud, PhD is a postdoctoral research fellow at the University of Massachusetts Boston. Masud is also currently the chair of Decolonial Racial Justice in Praxis, an initiative of Psychologists for Social Responsibility, and has completed her doctorate in Community Psychology from National Louis University in Chicago. 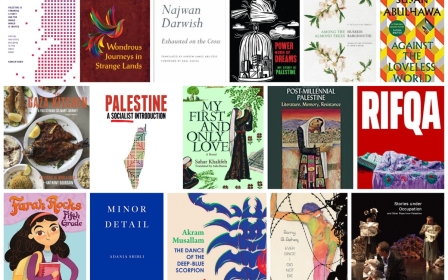 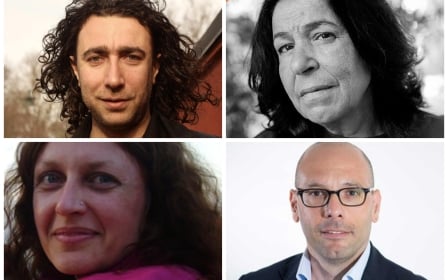