Protest, boycott and Knesset resignations: How to respond to Israel's nation state law

Hatim Kanaaneh
There are loud noises about demonstrations, strikes and the like. But none of these rises to the rank of true civil disobedience and serious consideration to join the BDS 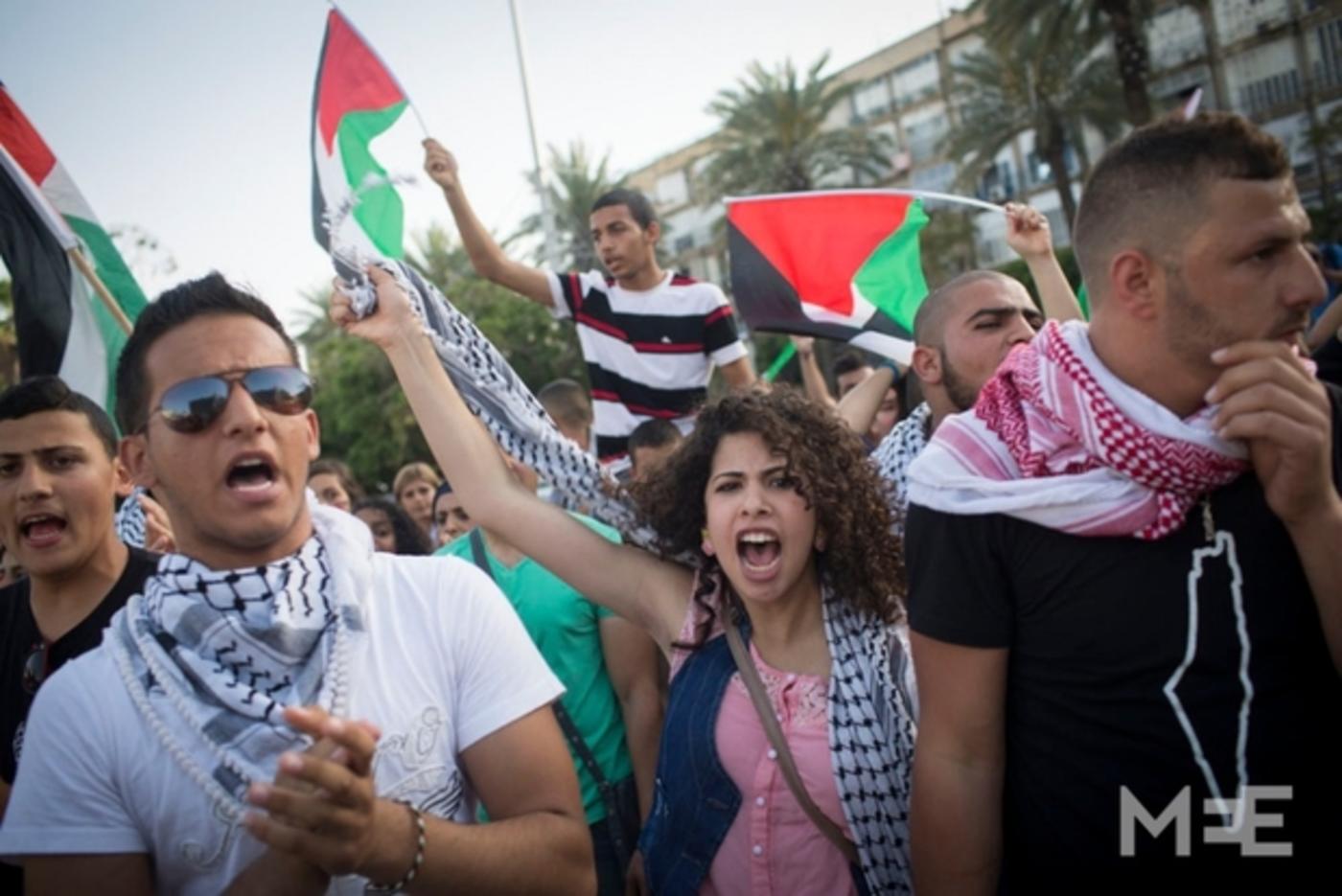 On the morning of 27 July, once again, I am picking figs from my trees while listening to Jack Khoury's hour-long current news programme on the local Arabic radio station out of Nazareth. Khoury, a Christian Arab citizen of Israel, seconds as reporter for Haaretz.

Were it not for his name, and judging only by his reports, he could be taken for another generic Israeli. I haven't read the text of the new Israel Nation-State Law and am not sure if now Khoury has to wear a racial identity tag on his arm. Right after mentioning the topic of the new law, he switched to a delectable nostalgic Arabic song about our connection to the land.

Does the new law specify the punishment for such thought crime, I wonder? Or do the authorities trust Haaretz bosses to discipline their workers? My Kamikaze Jewish friend, Gideon Levy, accuses the Israeli media of self-censorship and calls its free-press status a sham.

The next item on Khoury's programme was the Arab public's reaction to the house demolition in Sakhnin. He spoke on the phone with the owner of the destroyed home who warned that his was one of thousands of Arab homes designated for demolition.

Then came the professional opinion of Dr Hanna Swaid, ex-Knesset member, town planner and head of the Alternative Planning Center who pointed out the legal basis of the Israeli government's aggression.

No one seemed to question the direct link between the timing of the savage act under discussion and the new law. I wonder if anyone has noticed a seeming minor side issue: while everyone demonstrated in Sakhnin, the entire Bedouin village of Al-Araqib in the Negev was demolished for the 131st time.

Then Khoury moved on to another sensitive issue, sensitive at least to the Druze in Israel: the entire community seems up in arms (pardon the chilling expression - Druze males serve in the Israeli army and carry arms) over the way the new law has devalued them and their presumed blood brotherhood with the Jewish people.

One of their villages in Galilee once boasted of the distinction of being the record bearer in number of soldiers killed in combat in all of Israel. Suddenly, all bets are off and they are relegated to common goys, no better than other lowly Arabs.

"The Druze were thrown under the bus," a headline screamed. "We had forgotten our Druze brethren," Naftali Bennet, a minister and lead proponent of the new law admitted. Three Druze MKs submitted a challenge to the law in the Supreme Court. And heads of the community, political and spiritual alike, were summoned to a conciliatory meeting with Netanyahu and a few of his lead ministers.

But at the meeting the premiere refused to budge, offering, instead of going back on the law or any part of it, to look into promulgating an additional "basic law" to advantage the Druze over other run-of-the-mill goyim. Asa'ad Nafa'a, a leftist Druze lawyer whom Khoury recently interviewed, noted that instead of getting a ladder to climb down from the high tree he had climbed, Netanyahu offered to give the Druze a low ladder to climb just above the heads of other Arabs in Israel.

The Arabs and the Druze leadrship

I'm reminded of the intermediate status of the "coloured" in Apartheid South Africa and of the Pencil Test to ferret out borderline cases. Some Druze youth who may have debated whether or not to serve jail terms instead of serving in the Israeli army are pleased with the new development. "It is good it came from them," they cheered to Nafa'a.

No one, journalists or their interviewees, seems to appreciate the difference in approach between the Druze leadership and that of the rest of the Arab minority in Israel. Druze leaders (and some of the Bedouin former generals who dared to come out and speak their opinion) protest loudly but only within the perimeters of accepted Israeli structures, rushing with submissions to Israel's Supreme Court or with letters of protest to the leaders of their respective political parties, the very same leaders who had pushed hard to pass the law.

In contrast, the two complementary leadership circle of the rest of the Palestinian citizens of Israel, the elected Knesset members of the Joint List, and the circle of nominal political leadership embodied by the High Follow-up Arab Committee and its activist leader, Mohammad Baraki, have vaulted straight to Brussels and Geneva calling on the international community to bear its moral responsibility by admonishing Israel to return to its senses. This, judging from experience, is not a promising prospect.

The one missing link - so far - is that of the wider circle of civil society. There are loud noises about demonstrations, strikes and the like. But none of these rises to the rank of true civil disobedience such as the locking down of the municipalities in all Arab communities in Israel followed by sympathetic decent Jewish ones as well.

If it is to be effective, it has to be Palestinian and Jewish, without the usual stuttering of the Israeli left. And it has to be sustained for months if not years on end, including serious consideration of joining the boycott, divestment and sanctions campaign.

But the first shot across Netanyahu-and-company's bow has to be the collective resignation of all members of the Joint list from the Israeli Parliament and the establishment of a binational political party that calls for one secular and democratic state west of the Jordan River.

It would be very decent if an equal number of sympathetic Jewish MKs would resign and join the struggle.

Dream on! Here is Adalah's Hasan Jabareen quoted in the Palestine Square: "As Adalah wrote in its position paper, the law clearly shows how the Israeli regime is a colonial system of apartheid, in violation of the Apartheid Convention, which considers apartheid a crime against humanity."

How can an honest and sane Palestinian politician in Israel continue to function under such circumstances? On occasion, suicide by self-immolation is the only sane action. I think we are there.

- Hatim Kanaaneh is a public health physician and a Palestinian citizen of Israel who has lived and practiced his profession in his home village in Galilee for over four decades. He is the author of the short story collection Chief Complaint: A Country Doctor’s Tales of Life in Galilee (Just World Books, 2015) and of a book of memoirs, A Doctor in Galilee: The Life and Struggle of a Palestinian in Israel (Pluto Press, 2008.)

Photo: Palestinian citizens of Israel demonstrate in Tel Aviv against a wave of house demolitions in April, 2015 (MEE/Oren Ziv and Akram Drawshi) 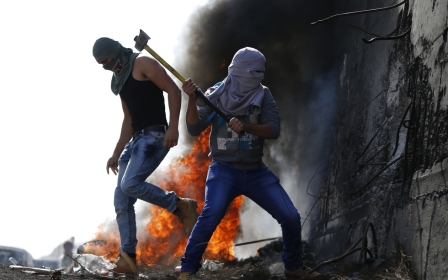 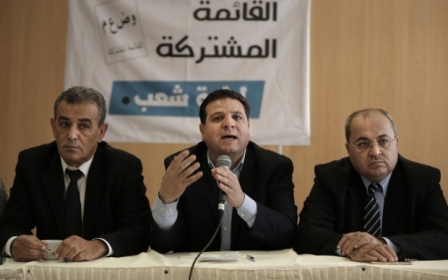 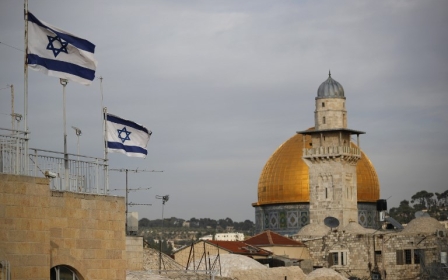