Feras Abu Helal
The tournament has seen massive demonstrations of support for the Palestinian cause, highlighting the rejection among Arab publics of normalisation with Israel 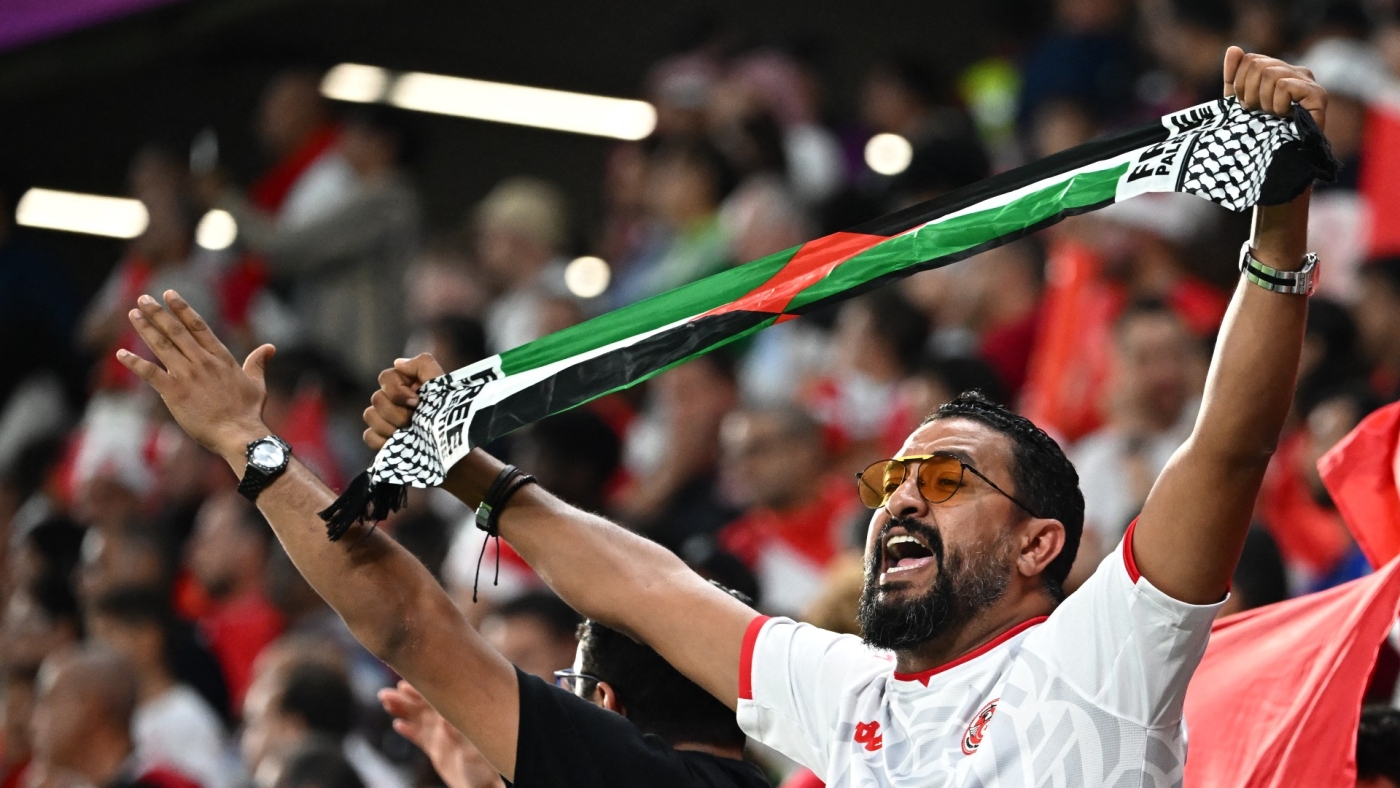 A fan holds up a 'Free Palestine' scarf in the crowd after the Qatar 2022 World Cup Group D football match between Denmark and Tunisia at the Education City Stadium in Al-Rayyan, west of Doha on 22 November, 2022 (AFP)

During the 48th minute of the Tunisia-Australia match at the World Cup in Qatar last Saturday, Tunisian fans held up a huge flag bearing the words: “Free Palestine.” Moroccan fans did the same the next day during their team’s game against Belgium.

For Palestinians, 48 is a key number in the memory of their national catastrophe. It refers to 1948, the year of the Nakba, when their grandparents were killed and expelled from their homeland to create the state of Israel. Many Arabs use this number to express their love and support for Palestinians.

The shock expressed by Israeli journalists at their own reception ... has further exposed the facade that Israeli politicians have attempted to construct

The displays of Palestinian banners by Tunisian and Moroccan fans came as Israeli TV presenters complained that Arab fans have not welcomed them at the football tournament in Qatar. Numerous videos have shown Arab fans refusing to talk to Israeli channels and expressing their support for Palestinians.

Morocco was among several Arab countries that in 2020 signed US-brokered normalisation deals with Israel. But the news emerging from Doha shows that many Arab fans have given a red card to the so-called Abraham Accords, despite efforts from the UAE and Bahrain to portray the deals as popular.

Since the 2011 Arab Spring and the ensuing counter-revolution, social media has increasingly been policed by authoritarian regimes. Dissidents in Gulf states have been silenced and imprisoned, while troll armies have dictated the political discourse. The Abraham Accords came against a backdrop of unprecedented repression, enabling Gulf powers to portray an imaginary groundswell of support.

Yet, despite this attempt to control the national debate, a recent poll by the Washington Institute showed that an overwhelming majority of people in seven Arab countries - around 80 percent - view the Abraham Accords as “very negative” or “somewhat negative”.

Today, the World Cup in Qatar is providing an open space for Arab peoples - from Morocco in the west to Saudi Arabia in the east - to express themselves about the process of normalisation with Israel. People can say their piece in football bleachers and fan zones, and on the streets.

One viral video shows an Israeli reporter complaining that Arab fans were refusing to speak with him because of his Israeli nationality. Indeed, many videos from Doha’s fan zones have shown Arab attendees shouting at reporters when they realise they are working for Israeli channels.

After Morocco’s normalisation with Israel, the massive display of the Palestinian flag by Moroccan fans during Sunday’s game carried a particularly poignant political message. A video of Moroccan fans at the World Cup singing a powerful, emotional song dedicated to Palestine also gained traction on social media.

Such videos show the true reality of the Arab masses rejecting normalisation deals with Israel, which have been imposed by Arab regimes. The shock expressed by Israeli journalists at their own reception during the tournament has further exposed the facade that Israeli politicians have attempted to construct.

Former Israeli Prime Minister Benjamin Netanyahu, who was re-elected earlier this month, built a significant part of his legacy on the claim of creating good relations with Arab countries, without solving the Palestinian conflict. Recently, Netanyahu wrote in Haaretz: “For the past 25 years, we were told repeatedly that peace with other Arab countries would come only after we resolved the conflict with the Palestinians.” Yet, he added, the “road to peace does not run through Ramallah, but rather around it”.

Some American commentators and politicians have asserted that the Palestinian issue is no longer important for Arabs, suggesting that Israel can enjoy peace and normal relations with Arab states without solving the Palestinian issue. But recent footage from the World Cup in Qatar belies this claim, showing that while Arab regimes might be on board, the Arab masses are most decidedly not.

Beyond feelings of solidarity towards Palestinians, the close public alliance between Israeli politicians and corrupt Arab dictators has increased hostility towards the Israeli state among Arab publics. Many see the two sides working in tandem to suppress their ambitions and dreams for human rights, dignity, democracy and prosperity.

In a 2019-20 poll by the Arab Centre for Research and Policy Studies, 79 percent of Arab people said the Palestinian cause was an Arab issue, not just a Palestinian one. In the same poll, Israel was seen as the biggest threat to Arab countries, exceeding the US and Iran. 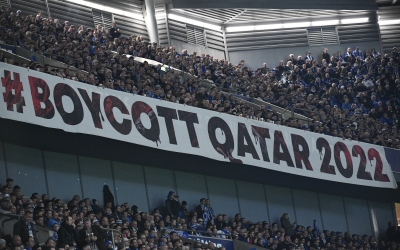 Yet, while the western media has largely ignored the outpouring of support for Palestinians at the World Cup, a tsunami of coverage has focused on the issues of workers’ rights and LGBTQ+ rights in Qatar. A number of European teams had planned to wear armbands promoting LGBTQ+ rights before Fifa warned that they would receive yellow cards for doing so.

Germany’s interior minister fuelled the debate by wearing an armband in the stands and publishing her picture on Twitter, while German players covered their mouths in protest against the Fifa restrictions in a team photo. But activists have condemned the hypocrisy of these moves when Germany has cracked down on Palestinian activism at home.

Arab football fans and players have a long history of expressing support for Palestine, from chanting supportive songs to displaying slogans in solidarity with Gaza, despite the penalties levied for political messaging. During the current World Cup, one viral video on Arab social media shows a Saudi YouTuber selling flags of different countries, and giving customers an extra Palestinian flag as a gift. Such stories rarely gain attention in the western media.

While Arab fans are often told not to mix sports with politics, European teams and fans have rightly taken the opportunity this year to show support for Ukraine in the wake of Russia’s invasion. Clearly, different standards are applied depending on the cause, highlighting the need for journalists to look beyond the western bubble.

Feras Abu Helal is the Editor-in-Chief of Arabi 21 news website. 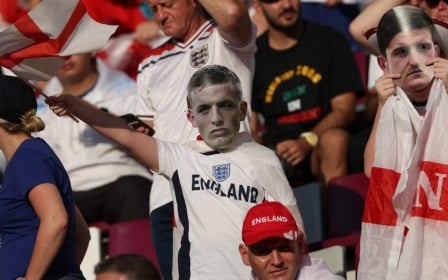 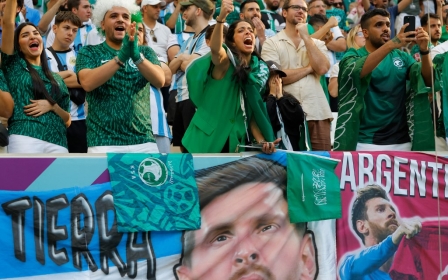 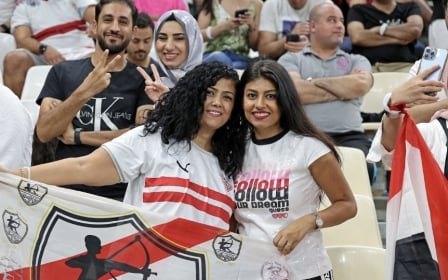